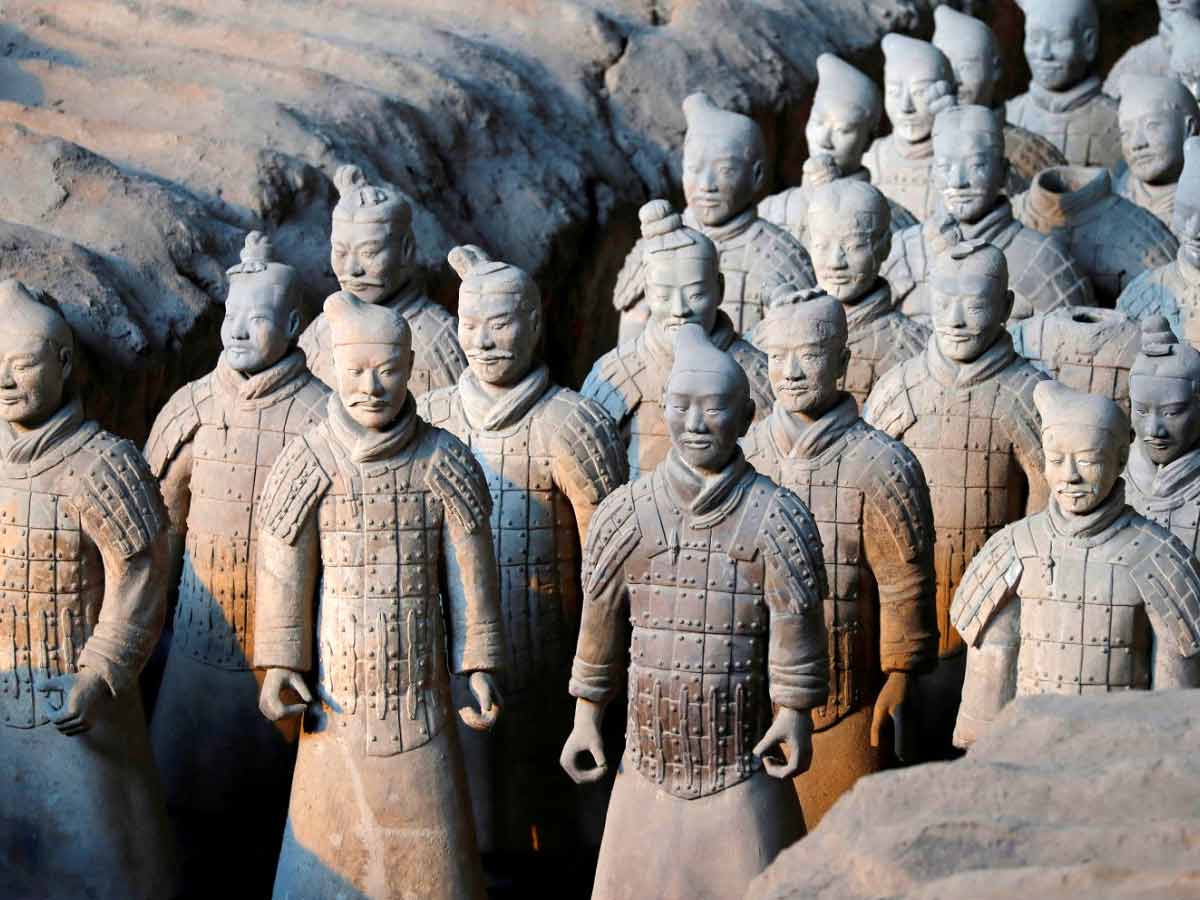 Terracotta statues were discovered in March 1974 by a group of farmers digging a well in the northwest Chinese province of Shaanxi, which was suffering from a drought. A vast army of life-size terra cotta soldiers and horses were buried for more than 2,000 years close to the unexcavated tomb of Qin Shi Huangdi, who had proclaimed himself the first emperor of China in 221 B.C.

A very arid land where persimmon resides along with pomegranate farms. The location, where the former capital of Qin Shi Huangdi, Xianyang, once stood, is located 30 minutes drive from congested Xi’an (pop. 8.5 million It is bitterly cold in the winter and sweltering hot in the summer. However, hotels and a roadside gift shop selling five-foot-tall pottery figures give the impression that something besides fruit cultivation is taking place here.

The figures were found in 1974 by local farmers in Lintong County, outside of Xi’an, Shaanxi, China. They date to roughly the late third century BCE. The generals are the tallest of the figures, whose heights vary depending on their functions. The figurines feature horses, chariots, and warriors.

More than 8,000 soldiers, 130 chariots pulling 520 horses, and 150 cavalry horses, according to estimates from 2007, were buried in the three pits that housed the Terracotta Army, the majority of which were located close to Qin Shi Huang’s mausoleum. Other terracotta non-military figures, such as officials, acrobats, strongmen, and musicians, were discovered in other pits.

Over the past 35 years, archaeologists have discovered 600 pits across a 22-square-mile area, which make up a complex of underground vaults that have largely remained unexcavated. Some are difficult to access, but three large pits are contained within the four-acre Museum of the Terracotta Army, which was built around the discovery site and inaugurated in 1979.

The statues stand in a long corridor, the soldiers display an astonishing level of individuality with their goatees or close-cropped beards, topknots or caps, tunics, or armored vests. In a second pit inside the museum, they are displayed as they were first discovered: some are upright and covered in soil up to their shoulders, while others lie on their backs next to broken and fallen clay horses.

There is a much larger necropolis that contains the Terracotta Army. The region is about 98 square kilometers, according to measurements made with ground-penetrating radar and core sampling.

The first emperor’s tomb mound is surrounded by a sizable portion of the necropolis, which was built as a miniature version of the emperor’s palace or compound. The pyramid-shaped earthen tomb mound is surrounded by two sturdy rammed earth walls with gateway entrances and is situated at the base of Mount Li. Several buildings, including offices, halls, stables, and other constructions, as well as an imperial park, surround the tomb mound in the necropolis.

To the east of the tomb, the soldiers are on guard. In the two millennia after its construction, up to 5 meters (16 feet) of reddish, sandy soil had accumulated over the site, but archaeologists discovered signs of earlier disturbances. Archaeologists discovered several graves from the 18th and 19th centuries that had terracotta fragments in them during the excavations near the Mount Li burial mound. These were used to backfill the excavations along with soil after being discarded as worthless.

The amazing discovery initially appeared to support the conventional wisdom that the first emperor had been a relentless warmonger who was only interested in his military mightThe lavishness of Qin Shi Huangdi’s tomb complex suggests that he was worried about the future. The emperor instituted several innovations, including standardized weights and measures and a single writing script. But he also yearned to live longer—possibly forever—on earth.

Alchemists told the emperor that three alleged Islands of the Immortals in the East China Sea were where they could find magical herbs. They claimed that children were the most likely emissaries to be allowed entry into this mystical realm; in 219 B.C., Qin Shi Huangdi is said to have sent thousands of children in search of the islands. They never returned. The emperor sent three alchemists 4 years later to get the herbs. One of them made it back and reported that a huge fish was rumored to be keeping watch over the islands.

The Ebang Palace of the first emperor, whose location on the Wei River, south of the ancient city of Xianyang, was only discovered in 2003, has always been linked to ostentation. A gallery on the upper floor that could hold 10,000 people and a network of covered walkways leading to distant mountains in the south are said to make this structure the most opulent residence ever constructed.

Whatever Qin Shi Huangdi’s enigmatic personality may be revealed by later excavations, some things don’t seem likely to change. And, likely, we’ll never fully understand the mysteries of his life. The Emperor and his mysterious tomb hold a significant place in the history of archaeology.