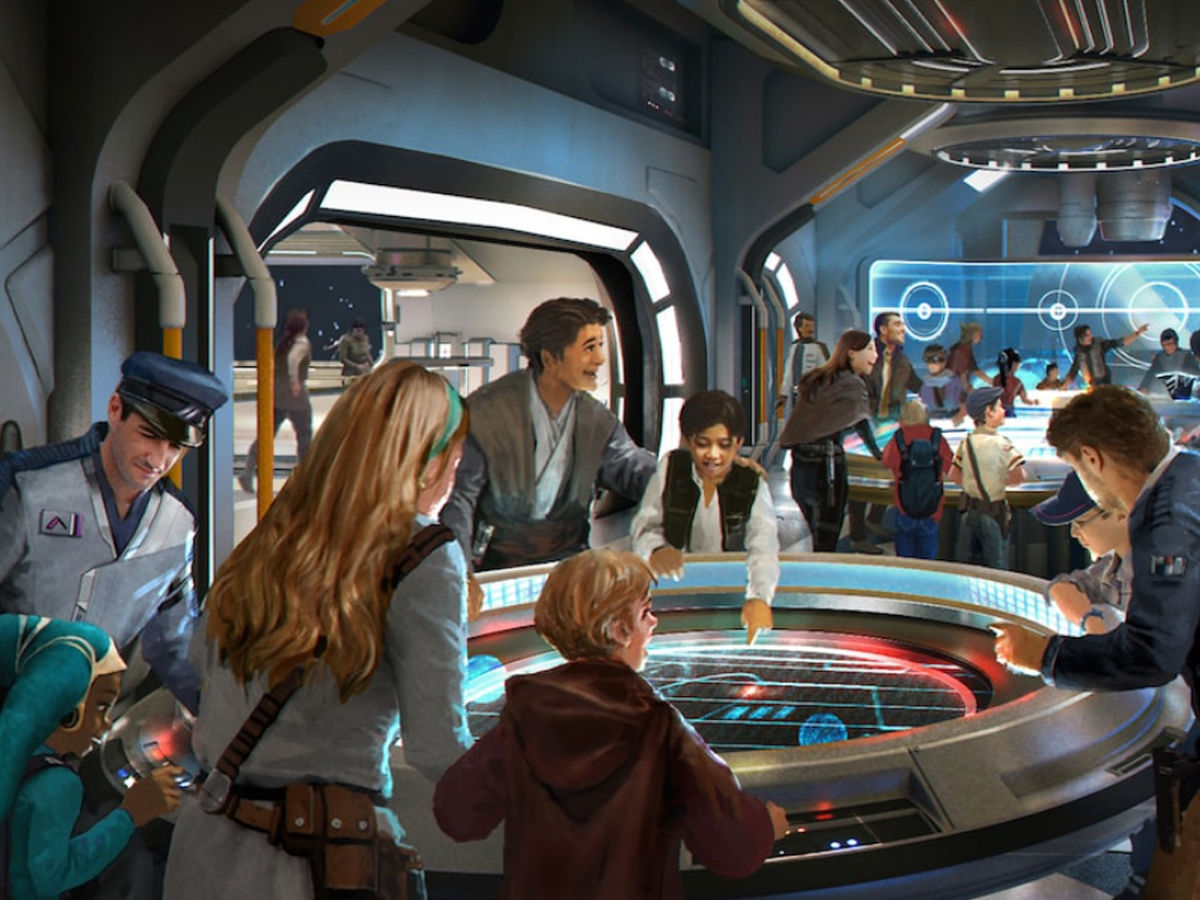 Disney has released pictures of its anticipated “Star Wars”-themed Galactic StarCruiser resort, scheduled to open in 2021 at Walt Disney World Resort, Florida. It is one of a kind Star Wars themed resort.

Expect a cruise-like experience, where guests can arrive and depart together at the Interstellar StarCruiser Terminal and live aboard the famed Halcyon for a two-day two-night immersive stay. Visitors can remain in boat-like cabins, enjoy dining onboard, and engage with the role-playing cast and crew members. Any window in the StarCruiser provides ever-changing views of the cosmos as the ship sails from place to place.

Expect a cruise-like experience, where guests can arrive and depart together at the Interstellar StarCruiser Terminal and live aboard the famed Halcyon for a two-day two-night immersive stay. Onboard, visitors can remain in boat-like cabins, enjoy dining, and engage with the role-playing cast and crew members. Any window in the StarCruiser provides ever-changing views of the cosmos as the ship sails from place to place.

With this latest endeavour, Disney further cements its bona fides as the master of the suspension of belief through the magic of simulation technology. “You will be invited to enter the Launch Pod for space travel,” according to the Disney Parks blog. “Through the windows above, you’ll see yourself leaving the real world behind as you jump into hyperspace and get closer and closer to the Halcyon.” After docking with the starship, the pod’s airlock opens with a whoosh, and you’ll walk through the central deck atrium of the spacecraft.

Not all will have the same encounter on the Halcyon ferry. Guests will pick their own adventure based on the choices they make during their stay. Any options also include a lightsaber, a preview of the starship bridges, and a planet expedition to Batuu at Star Wars: Galaxy’s Edge at Disney’s Hollywood Studios Park.

“Star Wars: Galactic StarCruiser is a completely new type of experience,” wrote Ann Morrow Johnson, executive producer for Walt Disney Imagineering, in a blog post earlier this year. “You’re going to live onboard a star cruiser, and you can get wrapped up in the larger Star Wars story.”

Even with disruptions and closures after the Covid 19 pandemic, Disney remains excited to launch Star Wars: Interstellar StarCruiser hotel encounter in 2021.

“Our industry is hurting,” said Josh D’Amaro, Chairman of Disney Parks, in his virtual keynote address earlier this week at an exhibition hosted by the International Association of Amusement Parks and Attractions. “It hurts because of the presence of Covid-19 in our cultures. But unlike some of the industries hit by the pandemic, our business is here to remain, and it’s here to expand.”

Disney Parks unveiled a gigantic showcase of ship enthusiasts that would feel like they’re at the D23 Expo.

To be sure, the Star Wars hotel is not going to be built like the ship above. Instead, when the fans are inside StarCruiser, they’re going to be made to think they’re on the Halcyon.

The resort stay is two days and two nights, and it’s sort of like a Disney cruise

“Your fellow guests will board and depart together,” said Chapek,

How the experience will be more and more like Star Wars

After checking into the hotel at the airport, the groups will be taken to the LaunchPad, which will blow you out into orbit.

Through the window above, you’ll see stars hovering about before you see the StarCruiser in the background, moving closer and closer before you interact with the Halcyon. After docking, the guests will go through a series of doors and go to a massive atrium to continue their journey.

From any room in the hotel, you’ll be able to see out into space

Whenever you look out the windshield, you’ll be able to see a galaxy far, far away.

When you look through the windows, you won’t see the same thing again and again. The sights outside the window will begin to change throughout your visit. Here, you enjoy the next two days and two nights living on a spaceship with everything from an alien squad to the fact that every window has a view of the sky.

Tuesday, a representative of Walt Disney World posted two new mock-ups of the starship cabins. They’re not really indicative of the final room look, but they also offer a sense of what fans might expect. A space indicator can be seen on the floor, and a clock inside the room displays how far guests are from their ride to Batuu.

In 2017, it was revealed that every guest would have the chance to undertake their own journey to the hotel. This is still the case.

At D23 Expo, Johnson said you’re going to come across some new “Star Wars” characters during your visit. You could even see some old characters like Rey and Chewbacca.

Not only will you be able to communicate with the Star Wars cast and crew, but you will socialize with other travellers onboard the StarCruiser.

Since this is ‘Star Wars,’ you might believe that not everything will go according to schedule.

Be careful of who you make allegiances to, for the decisions, you influence the course of your path and eventually decide how your Star Wars story unfolds.

During your visit, you’ll be able to check out a lot of events and dining opportunities onboard

If you ever wanted to do more than just use a lightsaber and wave it around, you’re actually going to be able to do so on board.

For the first time, both children and adults can square off against remote training using a lightsaber

Guests will also explore the ship’s operating areas, including the bridge, where the guests will learn how to navigate the boat and protect it.

You’re still going to be able to explore secret spaces aboard the ship. Johnson suggests this will be where remote allegiance members attend meetings, or where visitors might be called upon to become heroes.

A piece of experimental art shown above shows a teenage girl learning her Jedi skills, much like Luke Skywalker in A New Hope.

This expedition is the one immersive experience that will help you re-live the Star Wars for real. Unleash the Jedi, and come at peace with your soul. Improve your lightsaber skills and enjoy the adventure in the Disney Galactic StarCruiser.