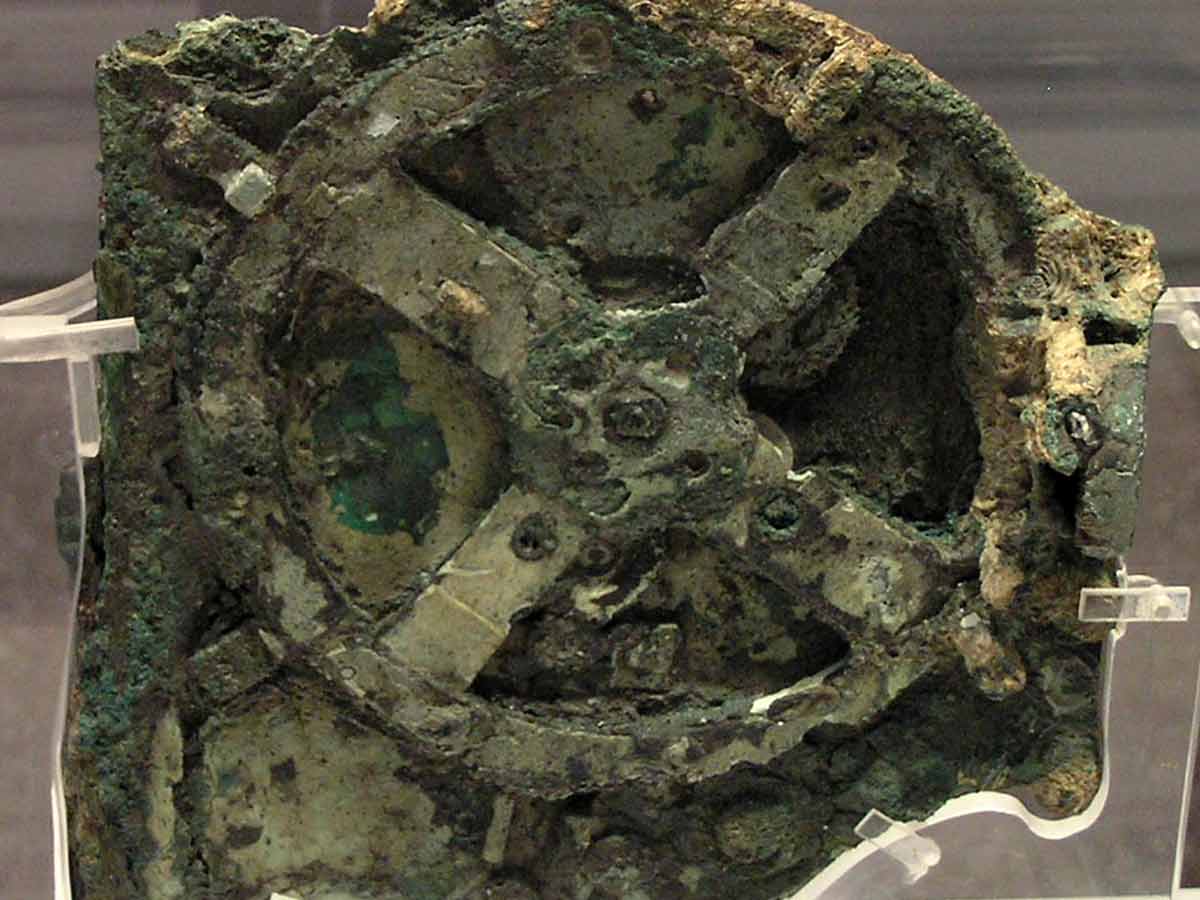 When we think of early computers, we generally think of punch cards and massive WWII-era computers that took up whole rooms. But, for hundreds of thousands of years, people have used mechanical devices to perform complicated computations… and not only abacuses and slide rules. Some of our forefathers devised astoundingly complicated machinery to aid them in estimating huge distances and the motions of the stars and planets.

Though there are allusions to the existence of similar devices dating back to 150 B.C.E. in ancient Greece, the Antikythera mechanism is the earliest one that has been uncovered.   The Antikythera mechanism is an ancient Greek hand-powered orrery that has been regarded as the world’s earliest analogue computer, capable of predicting celestial locations and eclipses decades ahead of time. It could also be used to chart the four-year cycle of athletic games, which was analogous to the ancient Olympic Games’ Olympiad cycle. This relic was discovered among the ruins of a shipwreck off the shore of Antikythera, Greece, in 1901. Archaeologist Valerios Stais recognised it as bearing a gear on May 17, 1902.

The device, which was discovered in the remnants of a 34 cm 18 cm 9 cm wooden box, was discovered as a single piece, which was then broken into three primary parts, which were then fragmented into 82 individual shards after conservation efforts. Gears can be seen on four of the shards, and inscriptions may be found on many more. The biggest gear has 223 teeth and is around 13 centimetres (5.1 in) in diameter.

In 2008, a team from Cardiff University led by Mike Edmunds and Tony Freeth utilised contemporary computer x-ray tomography and high-resolution surface scanning to picture interior parts of the crust-encased mechanism and interpret the tiniest inscriptions that previously covered the machine’s exterior casing.

This means it featured 37 meshing bronze gears, allowing it to track the Moon and Sun’s motions across the zodiac, anticipate eclipses, and simulate the Moon’s erratic orbit, in which the Moon’s velocity is higher at perigee than at apogee. Hipparchus of Rhodes, an astronomer, researched this motion in the 2nd century BC, and it’s possible that he was involved in the machine’s design. A section of the mechanism is thought to be missing, and it also computed the locations of the five classical planets.

However, in 1902, an archaeologist discovered a metal gear imbedded in it. He thought it was an astronomical clock at first, but the date of the other things in the wreck didn’t match. The shipwreck is thought to have happened long ago between 87 and 60 B.C.E., and the  astronomical clocks were first discovered in the Middle Ages. As a result, scientists gave up on future attempts to analyse the gadget until Derek J., a British scientific historian, began researching it in 1951.

Also Read, Voynich Manuscript: A Quest to Unfold a Mystery from 15th Century

Scientists were recently able to utilise new technology to study the inscriptions found on the device that supplied directions for its operation. He and a colleague collected X-ray and gamma-ray photos of the mechanism’s shards and began piecing together its construction and functions 20 years later.

They discovered an ingenious system that could show the exact location of the sun, moon, and lunar phase on a particular day, as well as the date’s place in the Metonic cycle — and even anticipate lunar and solar eclipses.

How did Antikythera mechanism work?

The Antikythera mechanism was a set of interlocking gears contained in a wooden box with two bronze faces on opposing sides and a little crank on one side, according to recent reconstructions. One dial included a pointer displaying the date on the Egyptian calendar and its location inside the zodiac on one of the device’s faces. Another dowel supported a tiny sphere that rotated on its axis to depict the moon’s phases.

There were two primary dials on the other side. The date’s location within the Metonic cycle was shown by one of the dials. The Metonic cycle is a 19-year period that is a common multiple of both the lunar and solar calendars, allowing them to be aligned. It’s still used to keep track of the Hebrew calendar, which combines lunar and solar elements.

The other dial displayed the projected moon and solar eclipses for a specific saros cycle. A saros is a 223-month period that may be used to forecast eclipses.

It was ahead of its time.

It needed an incredible amount of complicated expertise to combine all of these components, some of which were rather irregular, into a single mechanical apparatus. Price, the 1970s scholar who first put together the mechanism’s functioning, thought it was created in 87 B.C.E. and lost only a few years later. While comparable sorts of computations were invented throughout the Byzantine and Islamic periods, it was not until the 14th century C.E. that devices of this sophistication emerged.