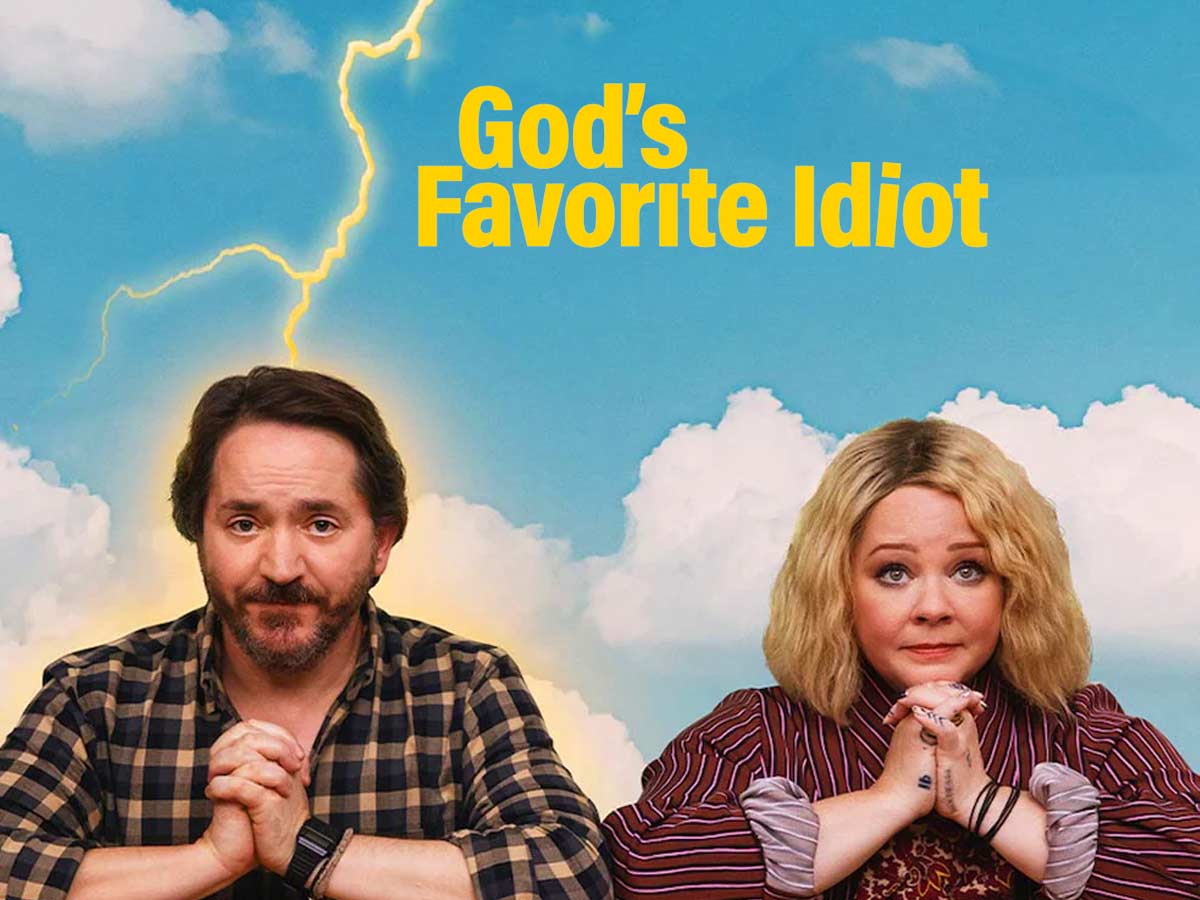 The film and television industries are no strangers to the notion of the apocalypse and the demise of society as it currently exists. Whether it’s a renowned YA book like Divergent, The Maze Runner, or The Hunger Games, a zombie-infested planet, or a black comedy like This Is the End, this has become its genre, spanning decades and finding light and compassion even in the darkest moments.

But what happens when a grumpy tech worker is forced to be that source of light? Except for this one individual, no computer or monitor can save the Earth. That is the plot of God’s Favorite Idiot, Netflix’s newest comedy series.

Netflix ordered a sixteen-episode series in December 2020, and it finally premiered in June 2022. Stormy waters first surfaced in 2021, when the series was trimmed in half to eight episodes, officially ending production in Australia.

Through their personal production firm, On the Day Productions, creator and executive producer Ben Falcone was set to star alongside his wife, Melissa McCarthy. Months later, it was revealed that Kevin Dunn, Leslie Bibb, Yanic Truesdale, and Usman Ally, among others, had been cast as extras. Michael McDonald (MADtv) will direct and executive produce every episode of the series.

God’s Favorite Idiot is available in bite-sized parts of rough twenty-five to thirty minutes per episode, making it ideal for watching aimlessly over a longer period. Melissa McCarthy, who previously appeared in Netflix’s Perfect Strangers, is returning to the streaming service with her husband and colleague Ben Falcone (Tammy, The Boss).

Falcone authored God’s Favorite Idiot and plays Clark, a typical middle-aged tech worker clumsily enjoying his best life until he is struck by lightning one day. This appears to be a divine act, as he begins to glow and develop powers.

In the first few minutes of the broadcast, Clark sings along to Harry Styles’ “Sign of the Times” and talks to his cat while wearing a bathrobe. While wandering outside, looking for his other cat Skittles, he looks up, notices a cloud above him, and is struck by a lightning bolt. His newfound abilities are initially perplexing, but his soon-to-be-girlfriend (McCarthy) and family are now sure that this is an act of God.

Also read: Eve’s Scandal: An Interesting melodramatic K-Series with a dash of revenge

One thing is definite about the show: it introduces notions that many Western viewers are familiar with, such as Satan, God, and War, but then uses these characters and settings to riff on these familiarities to generate chuckles. God’s Favorite Idiot makes no contribution to the philosophical or moral implications of what it means to save the world or what these concepts of good and evil actually are.

Perhaps if the program had dug a little deeper and gone beyond the surface level of comedy, it might have been more memorable. Instead, it’s a basic comedy that plays on scenarios that many people may already be familiar with and like before pushing play.

Their coworkers and other characters are relegated to the background of the screen, appearing only when a brief joke or two is required, or to scale down McCarthy’s Amily and how she feels Clark glows after running into him at the office late one night. What she says is correct, yet everyone believes she is intoxicated or on drugs.

Despite Amily’s portrayal as an absent-minded individual at times, this scene is a touch unnerving. Although done for comic effect, it evokes the historical portrayal of women’s issues as hysteria. Her suspicions are validated later, as Clark does indeed shine, but as the show attempts to create this female-positive world in which Satan is a woman—a concept that is quite difficult.

In Christianity, women are frequently regarded as one of the world’s original crimes, making them a scapegoat for being the source of all evil.

When it comes to depicting women, Satan is a temptress, which is yet another old archetype. Given that the main character is a man, it heavily relies on the idea that his life is now ruled by God, a girlfriend (Amily), and Satan, who is another furious woman attempting to drag everyone down with her for no apparent reason.

Instead of being a solid form of representation in the entertainment world, this is damaging and perpetuates age-old stereotypes if Satan is not given enough characterizations to contradict the underlying expectations that already exist.

At the same time, when Clark tells his employees about God’s word, he is not often questioned. Amily is offered wine when she is tempted by Satan, cementing her image as a ditzy blonde addicted to booze and drugs. This lowers women on the patriarchal totem pole. McCarthy’s abilities and skills are underutilized in God’s Favorite Idiot, making her appear at times more like a prop than an actual character. While she is not taken seriously, Clark is now regarded as God’s mouthpiece, spreading the news about his disciples.

Some scenes stand out for their hilarious timing and hilarity, but God’s Favorite Idiot as a whole falls short of expectations. The team and Clark, who has been attempting to redeem the world from Satan, make a heroic effort, but it falls short.

The writing, too, falls flat at times and is somewhat underdeveloped in its explanations for why certain events occur at specific periods. After a certain point, it seems a little too handy, throwing doubt on how well-developed the plot was.

Perhaps this was done on purpose, to create a show that people would watch mindlessly on a Sunday night. It has a good premise, but it should go far deeper than it does. There is a little story to move the action and tension forward, therefore most of the eight episodes consist of characters simply talking to each other about what is going on.

None of the characters develop, and they remain stuck in their roles as the uncomfortable IT man, his more outgoing girlfriend, and somewhat helpful coworkers who help them sort out their problems.

In the end, it appears to be a series that does not want to take too much thought. It wants the viewer to become immersed in the world it has created. However, no matter how hard it tries to include Alexa or Harry Styles, that universe is not immersive enough.

Even with repeated attempts to create a funny effect throughout, the audience is left wondering: so what? The world may never see the final eight episodes of the series, as there is no news on when or if they will be released, but keep tuned to see whether episodes nine through sixteen may ever emerge from the void.