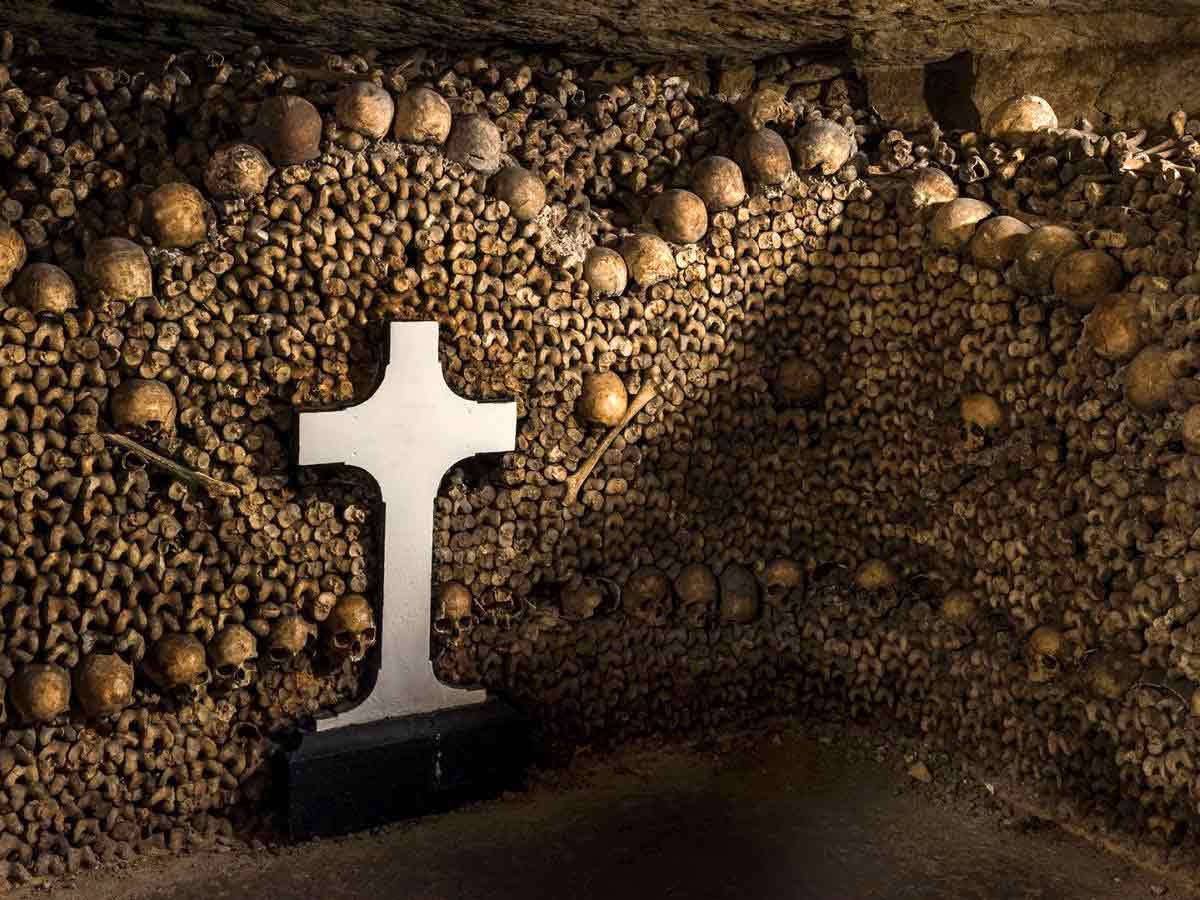 Earth is a lovely and bizarre place, studded with breathtaking sights as well as some strange and unusual locations. There is no shortage of strange locations in the world that are both fascinating and peculiar. Some mysteries have rational explanations for their strangeness, while others remain stubbornly unsolved.

Various mystery locations on the earth demonstrate that strange may also be fascinating. They may not be typical tourist destinations, yet visiting them can result in some of the most memorable experiences of a lifetime.

So, we’ve carefully curated a list of strange places to visit in 2021 that are worth seeing at least once in a lifetime. They can capture, perplex, and astonish you all at the same time

Paris is famous for its iconic architecture, artistic treasures, vibrant street markets, and legendary bistros. ‘The Catacombs’, on the other hand, are one of the strangest places in the world that you should see in 2021. There are tunnels beneath the streets of Paris that are lined with bones and skulls.

Death’s Empire, just beneath the ‘City of Lights!

By the 17th century, Paris’ cemeteries were so overcrowded with graves that bodies couldn’t be confined inside. People who lived near cemeteries complained about the stench of decomposing flesh. This public health issue prompted a decision to relocate the bones from cemeteries to an underground location, which was originally quarries.

It took 12 years to transfer the corpses’ bones! Six to seven million corpses were transported and elegantly arranged in the centuries-old caverns. Some of the oldest date back more than 1,200 years to the Merovingian era. The catacombs are the final resting place of some well-known historical figures.

Tourists can explore a little more than a mile of catacombs. Tunnels extend for several kilometers beyond, although trespassing is prohibited.

Endorheic valleys, 13,000-foot mountain ranges, and lush forests can be found in Nevada. This is the most mountainous state in the country, with snow-capped mountains.

The most astonishing aspect of this location is the juxtaposition of parched plains and a pleasant desert. One other item that makes Nevada one of the most spectacular places on the planet is the Fly Geyser. Man-made accidents sometimes have incredible effects, and here is one such case.

The consequence of human error and nature’s miracle!

On a private island in Nevada, one of the strangest places on Earth exists as a result of human error and natural wonder – Fly Geyser.

Fly Geyser, located on the outskirts of the Black Rock Desert, is nearly 100 years old. Locals struggled to locate water for irrigation back then. In the desert, a well was sunk and a geothermal boiling water point was discovered (200 degrees). They left because the water was too hot to drink.

It resulted in a calcium carbonate deposit of 10 to 12 feet. In 1916, the first geyser erupted. Similarly, the second geyser was accidentally generated in 1964 when a geothermal power firm excavated another well about 100 feet distant from the first geyser. The well was either not capped or was capped incorrectly. Boiling water gushed from the well, and calcium carbonate deposits formed.

The three enormous mounds were formed as a result of these deposits. These sediments have grown to be 6-foot tall and colorful. The geyser trio is still spewing scalding water 4 or 5 feet in the air.

The color on the mound’s exterior is caused by thermophilic algae, which thrive in a moist and heated environment. Quartz can also be found in the mound. Normally, geysers do not contain quartz before 10,000 years, however, Fly Geyser does, despite being only 100 years old!

Northern Ireland is a component of the United Kingdom and has a rich history. Northern Ireland has some spectacular natural features to go along with its world-class cuisine, fascinating history and culture, and live music scenes. Aside from these, the country has a wonderful and similarly strange site called The Giant’s Causeway.

The Giant’s Causeway is located on the Antrim Plateau’s edge in Northern Ireland, at the foot of a basalt cliff. It has over 40,000 hexagonal stepping stones. A volcanic outburst over 60 million years ago developed this UNESCO World Heritage Site. These huge basalt block columns protrude into the water.

The Lower, Middle, and Upper Basalt were formed by several episodes of volcanic crushing, burning, and cooling. The remarkable amphitheaters of hexagonal columns are formed by the Middle Basalt Rock.

According to tradition, the landscape was cut out by the huge Irish giant Finn McCool, who fought alongside the Scottish giant Benandonner. Finn erected a stepping stone causeway to Scotland, which was ripped by Benandonner, resulting in the Giant’s Causeway.

Its beauty is breathtaking, as it shifts the light from crisp greens to greys to mellow tobacco brown. The perplexing geology of this location makes it one of Europe’s most outstanding natural and strange places.

Oregon, on the West Coast of the United States, is known for its magnificent beaches, shimmering cascades, marble caves, and scenic coastal vistas. It is also home to a bizarre yet intriguing site – a sinking hole in the Pacific, for which there are numerous hypotheses.

A gigantic open crater on the Oregon Coast edge never fills up, despite being in the middle of the sea. Thor’s Well, also known as the “Pacific Drainpipe” and “Gateway to Hell,” is a bowl-shaped hole on the rugged basalt seashore.

This hole looks to drain water from the ocean, and no one dares to come any closer to the well during high tide. The 20-foot-deep hole was formed by years of waves crashing across the same spot, causing erosion.

Thor’s Well is an odd spot because, during high tide, the waves roll underneath the hole and fill it from below. The water then pours up in torrents. However, after a while, the water begins to move inside. And the cycle continues indefinitely.

It’s becoming popular among adventure photographers. It is preferable to arrive one hour before high tide to watch the fascinating occurrence of the well filling and emptying from a safe distance.

The Land of Unsolved Mysteries!

Countless ships, planes, and people have vanished here for no reason. The Bermuda Triangle, which covers an area of 440,000 miles in the sea, is rumored to be a mystery site with numerous fantastical notions.

According to certain theories, the area has some unusual local magnetic abnormalities. According to this idea, the compass is redirected due to the unusually strong pull of the earth’s natural magnet. Some have firmly suggested that paranormal activities and the existence of aliens play a role.

Another possibility for some of the disappearances is the presence of huge fields of methane hydrates on the continental shelves.

Some experts believe that releasing such gas into the water could cause ships to sink and flights to crash. And all in a matter of seconds!

Triangle in the Atlantic Ocean between Miami, Puerto Rico, and Bermuda.

Turkey has a rich cultural and historical legacy. It is well-known for its ancient monuments, magnificent landscapes, huge mountains, and natural beauty. Aside from all of this, there is one more place here that is both strange and wonderful – Pamukkale.

Pamukkale is noted for its gleaming white calcite travertine overflowing with warm, mineral-rich water. These weird and clear lakes dangle like falls of a massive waterfall. Pamukkale translates to “Cotton Castle” in Turkish.

These stunning travertine terraces were formed millennia ago from limestone deposited by plentiful hot springs. Tourists can even take a dip in the beautiful warm water pools (around 36 degrees Celsius). Pamukkale has been designated a UNESCO World Heritage Site.

Denizli, Turkey is the location.

Tanzania is known for its scenic beauty. It is also one of the most hostile environments for the bulk of flora and fauna. That location is known as Lake Natron, and it is located in the Arusha region of Tanzania.

One of the World’s Most Caustic Lakes!

Lake Natron is a salt lake that is exceptionally alkaline due to the high concentration of chemical natron (a mixture of calcium carbonate and baking soda) in the water.

The pH level of the water is as high as 12, and the temperature can reach 60 degrees Celsius. The lake’s color is caused by the presence of halophiles, which are alkaline water microbes that create red pigment.

The lake, which is inhospitable to most species, supports an ecology of salt marshes, flamingos, and wetland birds.

Northern Tanzania is the location.

Mexico is a haven for adventure seekers, with palm-fringed beaches, wildlife-rich lagoons, lush green jungles, chili-spiced cuisines, and snow-capped peaks. Along with other gorgeous spots, Mexico has a strange place that has become a landmark for the city of Chihuahua – The Giant Crystal Cave.

Crystal Cave, located 300 meters beneath the Sierra de Naica Mountains, was created almost 26 million years ago. The cave is about 30 meters long and 10 meters wide, and it has been filled with groundwater for tens of thousands of years. Anhydrite is a mineral found in this water. The magma beneath the sea keeps it warm.

The temperature of the water eventually dropped, resulting in the breakdown of anhydrase and the water is rich in calcium and sulfate.

Naica, Chihuahua, Mexico is the location.

Also read: The Crooked Forest : Mysteries that were hidden from the world

For those who enjoy the great outdoors, New York is a fantastic trip. It is home to natural wonders as well as hidden treasures. Among these is Eternal Flame Falls, which is both beautiful and strange.

The Unknown Flame Beneath the Waterfall!

A flame burns in a little cave at the base of the waterfall at the Shale Creek Reserve. Eternal Flame Falls is so named because the flame never goes out.

The temperature of the rock must be around 100 degrees Celsius for this event to occur, such that the carbon molecules break down and emit natural gas, resulting in a burning flame.

Natural eternal fires arise when gas seeps through the soil and bacteria consume the methane, converting the gas to carbon dioxide. At Endless Flame Falls, however, the gas is not transformed into carbon dioxide; instead, it is contained and leads to an eternal flame.

Ladakh is a Trans Himalayan region known for its stunning scenery. It is a sanctuary for nature lovers and outdoor enthusiasts. Along with the beautiful scenery, there is a strange and intriguing site in the area known as Magnetic Hill.

A little piece of road defies gravity and is located 30 kilometers from Leh on the Leh-Kargil Highway. Magnetic Hill is a force that pulls stationary vehicles upwards. Some numerous hypotheses and beliefs are supported by compelling evidence. According to the peasants, there was once a route that led to heaven.

According to scientists, the hill emits a powerful magnetic field that draws automobiles into the area. Another commonly recognized hypothesis holds that it is simply an optical illusion that makes the road downslope appear to be an upslope. Basically, when the car appears to be driving uphill, it is actually going downhill.