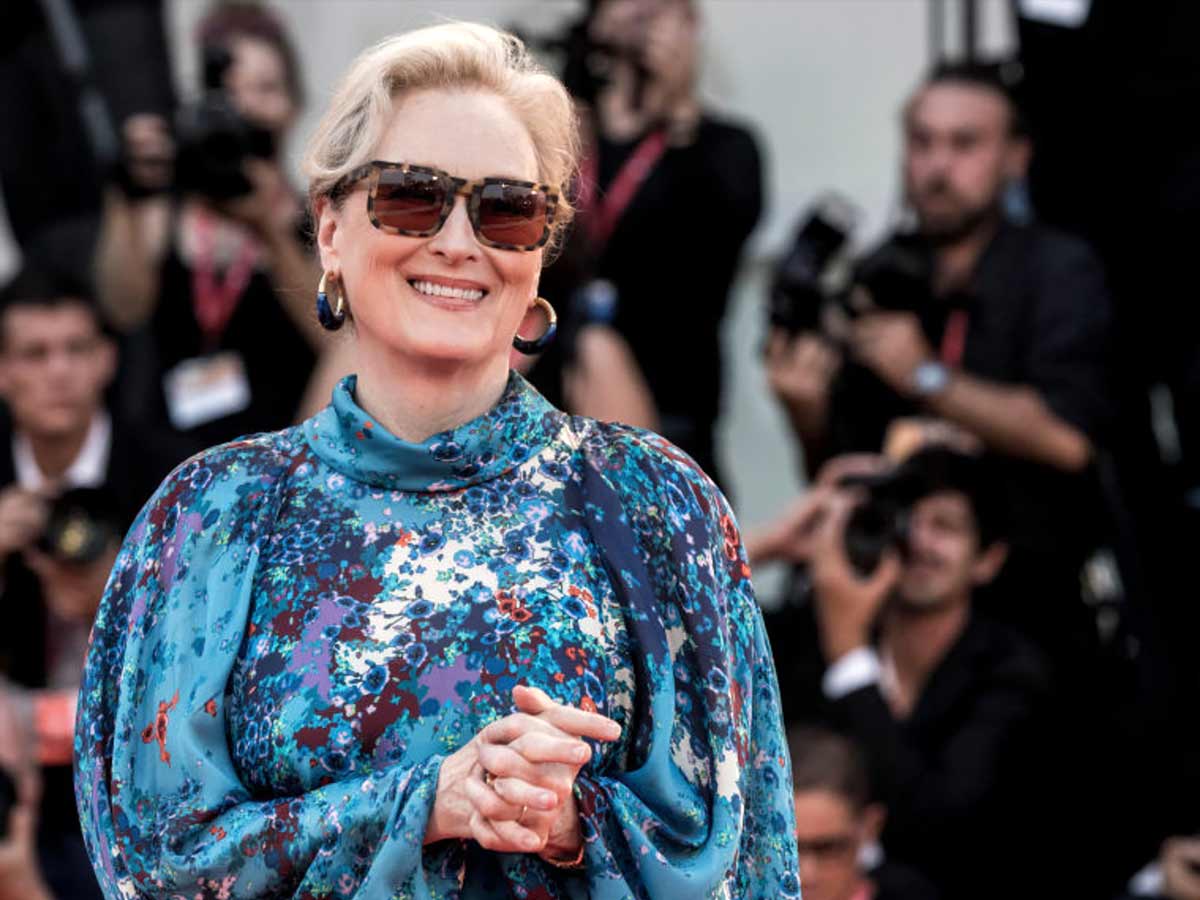 Meryl Streep is one of the most successful actors, receiving nominations for every role she has played. We’re going to rank the best Meryl Streep movies.

Meryl Streep has been in far too many movies to count. But, of course, we counted. She has appeared in 75 movies and counting since 1977. We couldn’t determine which were our favorites because there were so many.

Many younger people are familiar with Meryl Streep from her memorable roles as Miranda Priestly in The Devil Wears Prada and Amanda Seyfried’s mother in Mamma Mia. Despite how many fans can quote Miranda Priestly’s legendary monologue about Andi’s cerulean blue sweater, performed by Anne Hathaway, neither of these movies cracked best Meryl Streep movies.

So, if you’re a fan of one of her generation’s great actresses, here are some of the finest Meryl Streep movies.

Meryl Streep plays frigid editor-in-chief Miranda Priestly in this immensely popular comedy, one of her most memorable performances. Streep delivers a notably nasty portrayal in “The Devil Wears Prada,” taking direct influence from real-life Vogue magazine editor Anna Wintour. When the two eventually met on camera in 2017, Wintour declined to acknowledge the film and its gruesome depiction.

This is possibly the most rewatchable film of Streep’s resume. There is no limit to how many times we will see the “cerulean blue” speech.

Even those who aren’t fans of fashion or workplace conflict will enjoy this comedy based on Lauren Weisberger’s eponymous novel. Miranda Priestley, the chilly workaholic editor, is played by Meryl Streep. But we can’t get enough of her couture looks and the terror she instills in her helpers with a single glare, jacket throw, or subtle clapback regarding sweaters. 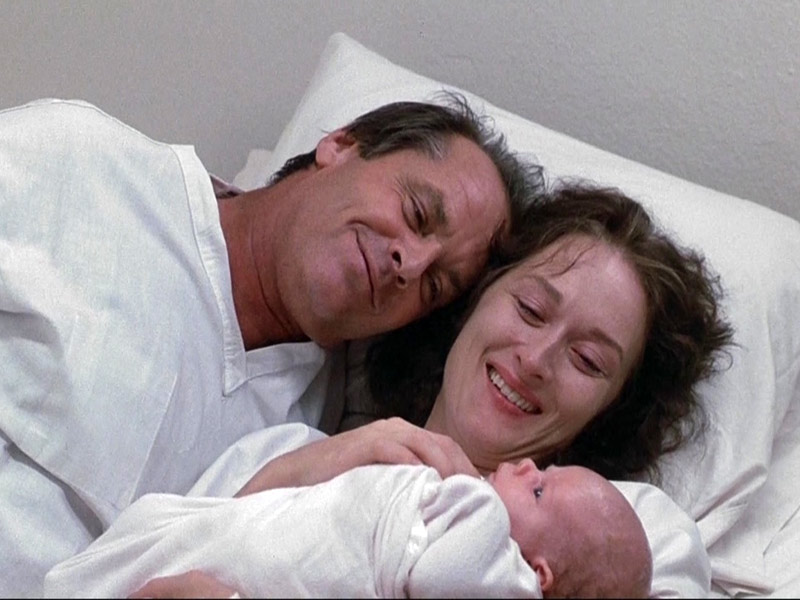 Heartburn (1986), a book-to-film adaption, is based on Nora Ephron’s novel, based on her real experiences while married to Carl Bernstein but is semi-fictionalized. Heartburn is about a cuisine writer, played by Meryl Streep, married to a womanizer, portrayed by Jack Nicholson. Despite marrying him despite her concerns about his background, she finds her spouse is having an affair when pregnant with her second child and regrets her mistake.

Streep suffers from heartbreak in more ways than one in this 1986 rom-com. Streep and Jack Nicholson play a marriage on the verge of divorce following his character’s adultery in this adaptation of Nora Ephron’s novel. Simply told, it’s difficult to criticize this Ephron narrative.

Our isn’t the only film on this list with these two performers; they also appear in the following film on the list, Ironweed.

Ironweed (1987), a totally different picture, again portrays Meryl Streep and Jack Nicholson as a couple, but this time as a homeless couple in the aftermath of the Great Depression. William Kennedy created the screenplay and received the Pulitzer Prize for the novel, based on a book of the same name. As a group of Albany residents resolves to go to any length to rid the city of homeless people, Jack Nicholson, playing the main character Francis, struggles to deal with his past. 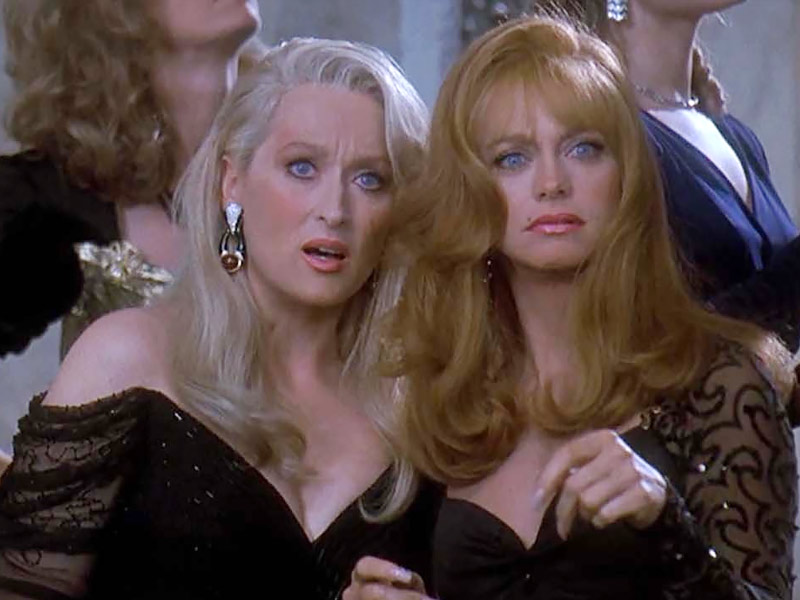 Death Becomes Her (1992), starring Goldie Hawn, Bruce Willis, Isabella Rossellini, and Meryl Streep, is the rivalry between Goldie Hawn’s character Helen Sharp and Meryl Streep’s character Madeline Ashton Melville. Dr. Ernest Melville, played by Bruce Willis, grants them immortality. While they cannot die, their physical bodies are altered when they “perish.” Not wanting to be surpassed by the other, the ladies compete throughout the film, resulting in funny results.

We’ll be horrified and fascinated for the rest of our lives by the ageless beauty’s ability to extend her neck and twist her head. Yes, it’s the type of belly-achingly funny, body-contorting humor.

Death Becomes Her, one of Meryl Streep’s funnier and odder portrayals, has a cult following, particularly within the LGBTQ+ community, akin to The Devil Wears Prada. 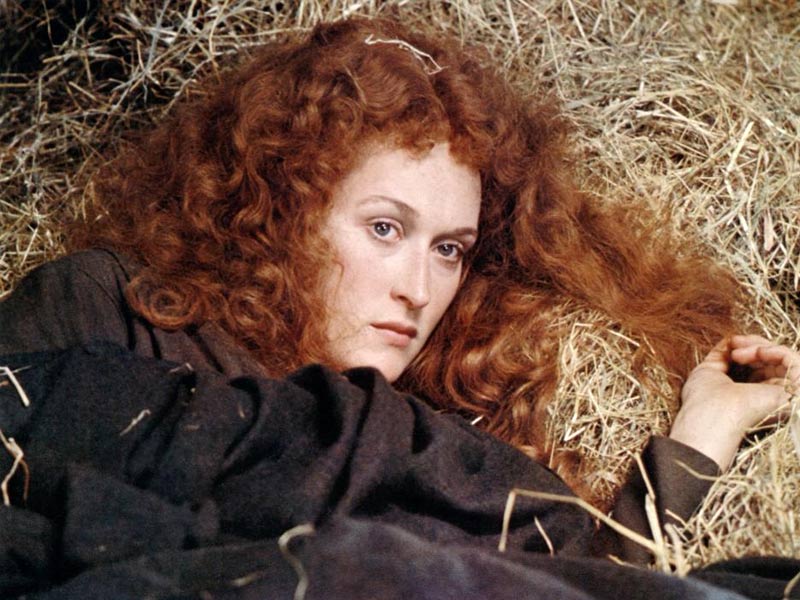 This is the third film on this list based on a novel; it appears that Meryl Streep was born to play literary adaptations. Is it because she’s gifted and well-read? The French Lieutenant’s Woman (1981) is based on John Fowles’ 1969 novel.

This one gets great marks not only because Meryl Streep is amazing as always, but also because directors could adapt its difficult tale from John Fowles’ Victorian-era novel. Streep manages to portray both Sarah and Anna without breaking a sweat.

The film is highly meta, blurring the borders between fiction and reality on several levels. Sarah and Charles, a Victorian couple in love, are played by Meryl Streep and Jeremy Irons. Soon, even the two performers begin to confuse fiction and reality, their method of acting reaching new heights. Because of their outstanding performances, the film was nominated for five Academy Awards. 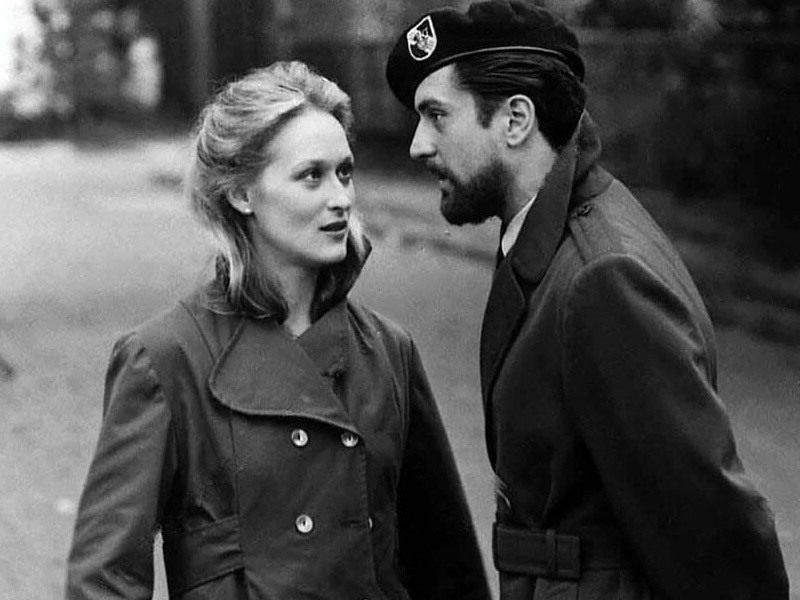 The Deer Hunter (1978), an epic military drama film, is the only one on the list in which Meryl Streep has a supporting part. It depicts the lives of individuals living in a tiny industrial town in Pennsylvania and the repercussions of the United States’ Vietnam War on their lives.

At the time of filming, John Cazale, who played Stan, was battling cancer and couldn’t pay his medical expenditures. Robert DeNiro paid for Cazale’s medical insurance. He refused to participate in the film if he was dismissed to keep his co-worker on set and healthy. 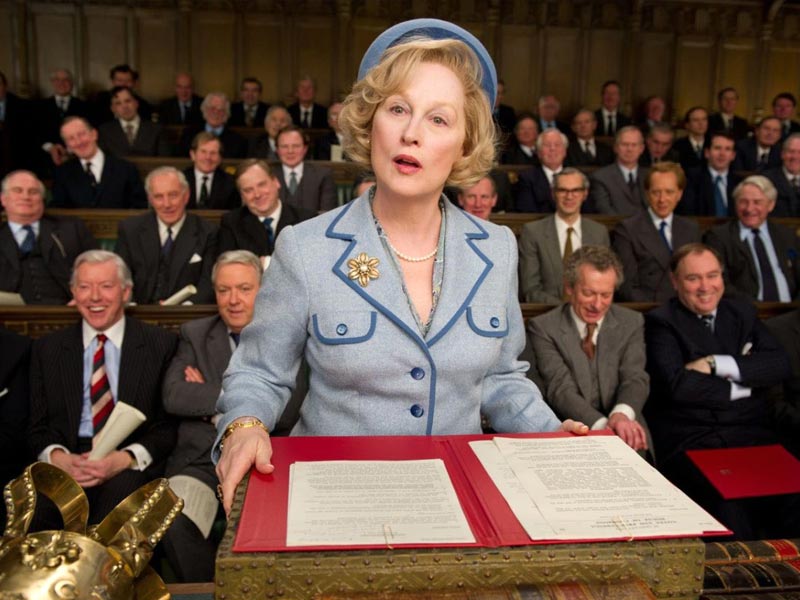 The Iron Lady (2011), the most recent of Meryl Streep’s films on this list, is a biographical drama that depicts the life and career of Margaret Thatcher, a British politician who became the first female Prime Minister of the United Kingdom in the twentieth century, as well as the longest-serving Prime Minister. Alexandra Roach plays the younger Thatcher, while Meryl Streep portrays the older Thatcher.

Streep vanishes in the character of Margaret Thatcher, Prime Minister of the United Kingdom from 1979 to 1990, in a portrayal that garnered her an Oscar for Best Actress. It’s difficult to tell the difference between her as the eloquent British stateswoman and the actress. And, though it isn’t the best biopic we’ve ever seen, movie rates high because of how well Streep humanizes such a divisive political figure.

While this part helped Streep win several Oscars, one of The Iron Lady’s most iconic moments came when she won her third Oscar, 29 years after her second. 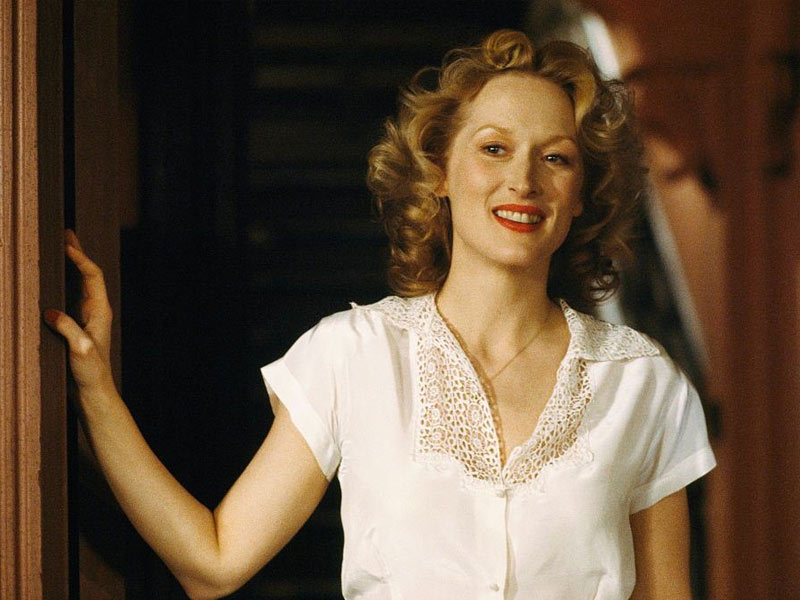 Sophie’s Choice (1982) tells the story of Sophie, a Holocaust survivor played by Meryl Streep, and her violent lover, Jewish-American Nathan, who is fascinated with the Holocaust. As they encounter Stingo, a writer and the film’s narrator, their tumultuous relationship is influenced by this fixation as well as Sophie’s terrible history.

It’s simple to understand why Streep won an Oscar for her performance in 1982. She performs the title part with such tenderness that the film will stay with you for years.

While most of the tale was made up, just one of the characters in the film was based on a genuine person: Rudolf Hoess, an actual Auschwitz commander. 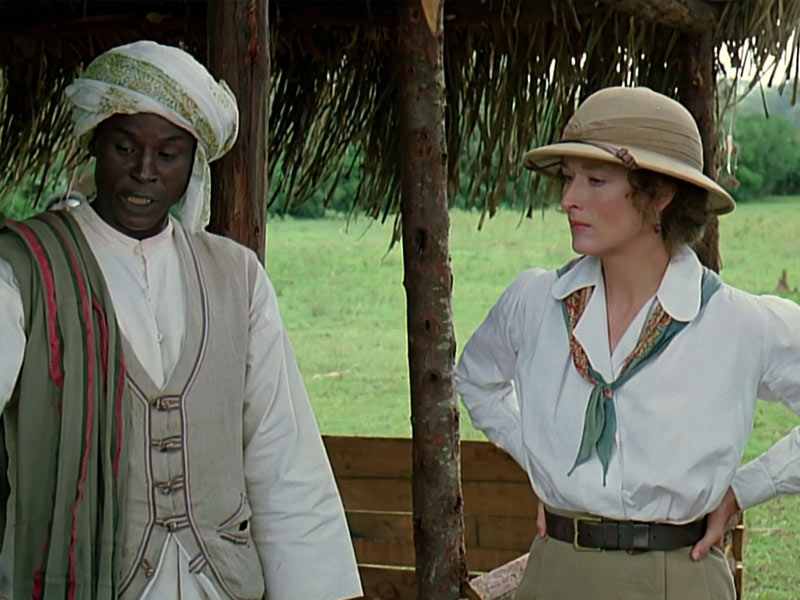 Karen Blixen, a Danish baroness and plantation owner, is played by Meryl Streep. Out Of Africa (1985) is set in the twentieth century and relates the story of Karen Blixen and Denys Finch Hatton, a big-game hunter, and their torrid romance as she flees the disappointment of marrying Baron Bror Blixen, who turns out to be a failure and a terrible businessman.

Like most of the other films on this list, Out of Africa is an adaptation loosely based on Isak Dinesen’s autobiographical novel of the same name. Only the two last narrations were adapted from the book, with the remainder of the script written by Kurt Luedtke. He attempted to replicate the original writer’s style.