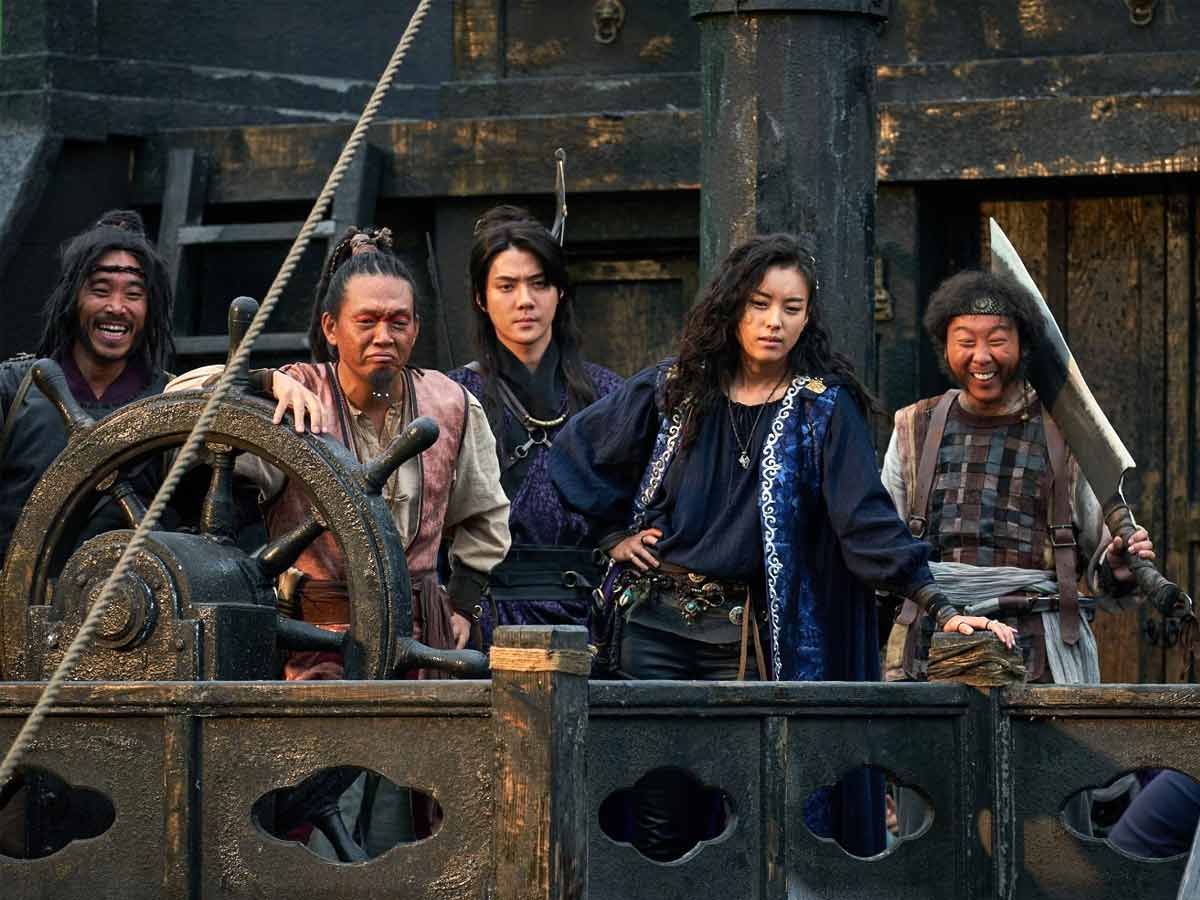 On March 2, 2022, Netflix released the Korean action-adventure film The Pirates The Last Royal Treasure. The Pirates is a sequel to filmmaker Jeong-hoon Kim’s 2014 film.

The plot follows Captain Hae-Rang and her crew on an adventure that will bring them to a hidden treasure trove.

Captain Hae-Rang is a courageous and daring pirate ship captain. She is determined to conquer all obstacles and lead her people to the secret wealth of a forgotten kingdom, buried across hazardous waters on a deadly island. She is beautiful, talented, sensitive to her crew, and ambitious in her visions.

The Pirates The Last Royal Treasure will have you cheering for them through the battle.

The film opens with Hae-ship Rang’s colliding with a band of robbers commanded by their master, Woo Moo-chi. Following some initial conflicts and much friction between the Captain and the Boss, the two parties ultimately joined forces. They headed off to hunt for gold, following a map that claimed to take them to the treasure. After a few double-crosses and betrayals, the Captain ultimately gathers a squad of brave Joseon pirates and outlaws to embark on an adventure braving rough waters, following cryptic clues, and doing outrageously perilous exploits to obtain the promised riches.

The hunt, however, appeared to be riskier than planned. After a few dead ends and accumulating clues that would eventually lead them to their objective, the gang set off for their final destination, linked by loyalty. On the journey, the pirates come into a deadly and brutal rival crew on the same mission as them and will stop at nothing to get their hands on the riches. The two factions engaged in a brutal battle with sword fighting and cannon fire as one gang attempted to eliminate the other to steal the wealth.

Also Read, Juvenile Justice: A Complex Courtroom Drama with a Dash of Reality

In the midst of all of this, romance grows between the Boss and the Captain as they learn to trust each other and save each other from various dangerous circumstances.

The Pirates The Last Royal Treasure isn’t very profound or surprising, making it a relatively calm and uninspiring movie at moments.

The director does an incredible job of bringing this story to life with a combination of gritty action sequences that feel real enough that you might forget you’re watching fiction; gorgeous shots that make you want to ditch your day job and join one of these ships yourself; and actors who are so convincing as pirates that anyone could believe they were born at sea.

The Pirates The Last Royal Treasure lives up to the anticipation, with fights, romance, devotion, and betrayal. There is no shortage of great action sequences in the film, but it lacks a plot. The film endures for more than two hours on a lightly written storyline that sometimes appears too fake. In terms of events, there isn’t much in the picture, but there are lots of battle sequences interspersed with romance now and again.

The storyline twists of The Pirates The Last Royal Treasure are predictable, and nothing particularly startling occurs. It’s your typical pirate adventure film, with a bunch of pirates going on a treasure hunt, competition and tension giving way to romance, and everything ending on a pleasant note.

Despite this, Last Royal Treasure has some solid gags and an intriguing cast of performers who do their best with their scripts. For those who have seen the previous film, Last Royal Treasure largely rehashes the same concepts, with a dash of Pirates of the Caribbean: At World’s End thrown in for good measure.

The most exciting parts of the picture are the superb action sequences shot with tremendous elegance and persistence. Director Kim Jung-hoon fires the action-packed scene pieces with a flair for the theatrical. Still, the picture is infused with emotional depth to make it more than just a succession of more complex visual effects.

In terms of visuals, the CGI in several parts was inadequate, especially since an action-adventure picture should have superior images. The penguins were more fabricated than in an animated picture. The film’s depiction of nature’s wrath elicits no thrill in the viewer. Overall, the aesthetics are uninspired and unsatisfying.

The Pirates The Last Royal Treasure Reveals a Unique Twist, Set in the Joseon Dynasty

Despite the script’s flaws, The Pirates The Last Royal Treasure has some amusement. The physical humor and several funny dialogues are worth noting and provide a pleasant reprieve from the long, drawn-out, threadbare narrative.

It’s not flawless, and it doesn’t compare to some of the great maritime adventures out there. Still, if you’re looking for some high-octane action and can overlook the plot’s shortcomings, you should find enough to enjoy warts and all.

Overall, The Pirates The Last Royal Treasure is a fun film with nothing too difficult or serious. It has some wonderful punchlines that will keep viewers entertained.

The Pirates The Last Royal Treasure is now available on Netflix.