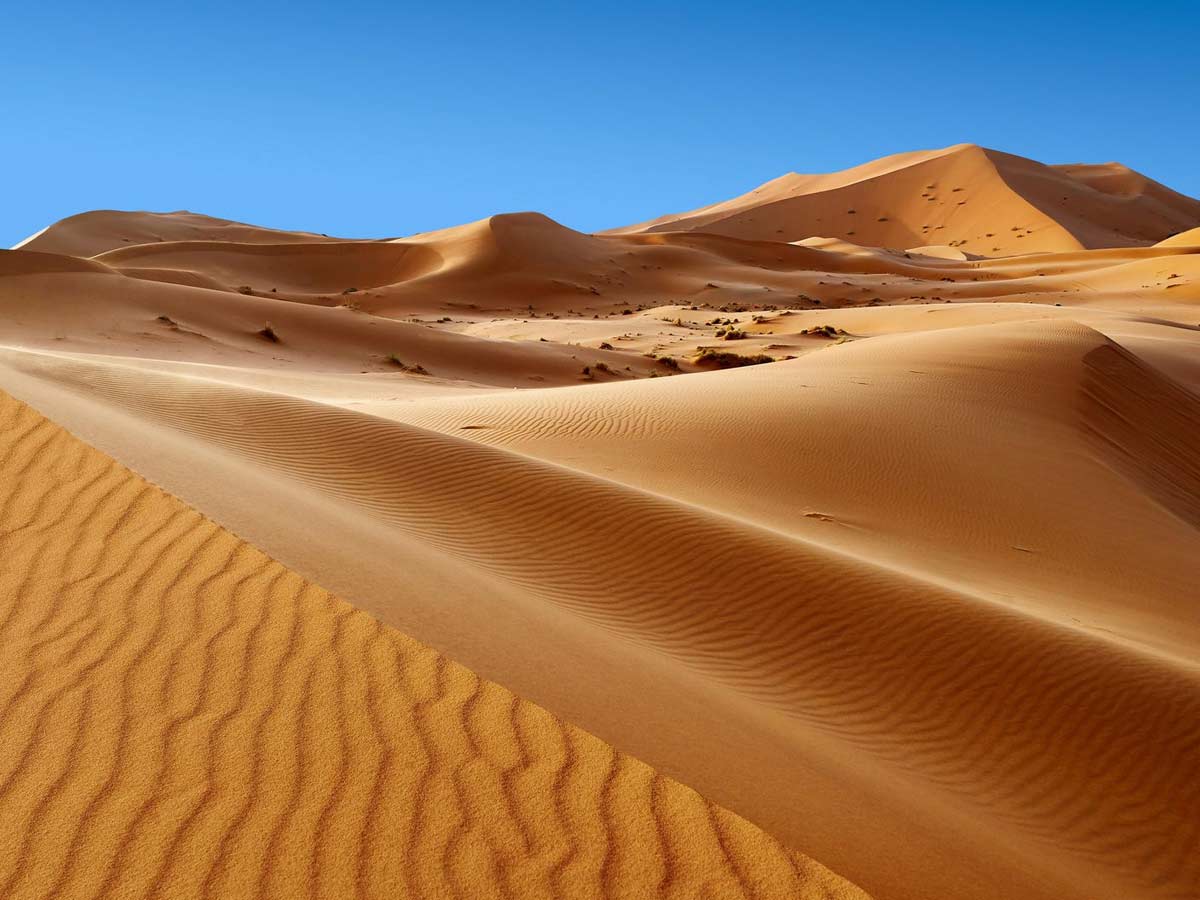 Deserts are harsh, unforgiving environments. Home to a select few creatures capable of sustaining these harsh temperatures, as they are very hot during the day, terribly cold at night, and receive very little rainfall throughout the year.

Plants in the desert have a distinct appearance from those found in other parts of the world. They are frequently bloated, spiky, and have small, seldom brilliant green leaves. Their unusual look is a result of their amazing adaptations to the desert climate’s obstacles.

How do they survive?

Drought tolerance, succulence, and drought avoidance are the three basic adaptations of plants in the desert to survive better.

Each of these adaptations is unique yet effective in allowing plants to thrive under circumstances that would kill them in other areas.

The capacity of a plant to endure desiccation without dying is referred to as drought tolerance (or drought dormancy). During dry seasons, plants in this group drop their leaves and go into hibernation. The transpiration through leaf surfaces accounts for the majority of water loss. Hence losing leaves conserves water in the stems.

Resinous coatings on the leaves of plants that do not ordinarily shed their leaves help prevent water loss. Drought-tolerant plants and trees have more widespread roots that reach deeper into the earth than succulent roots. In some cases, they reach extreme depths (e.g., mesquite). The majority of a mesquite’s roots, on the other hand, are within three feet (0.9 m) of the ground.

Water is stored in succulent plants’ fleshy leaves, stems, and roots. The soil dries quickly under the harsh heat, and desert rainfall is frequently modest and fleeting. Succulents have vast, shallow root systems to adapt to these environments. The water-absorbing roots are usually found in the top half-inch of the soil. When the stomates are closed, most species’ stems and leaves have waxy cuticles that make them practically waterproof. Reduced surface areas help to save even more water.

CAM, or Crassulacean Acid Metabolism, is water-efficient photosynthesis seen in many succulents. At night, CAM plants open their stomates for gas exchange and carbon dioxide storage. Photosynthesis is carried out utilizing the stored carbon dioxide during the day when the stomates are closed.

To better understand Drought avoidance, we can take the example of Annual plants. Annuals are plants that bloom, set seed, and die all in the same season. The ultimate purpose of these creatures is to replicate themselves. By not existing, annual plants can avoid adverse environments, therefore avoiding droughts. They reach maturity in a single season and perish after expending all of their life energy on generating seeds rather than saving some for future Survival.

Most Desert annuals germinate only within a small window in the fall, when the summer heat subsides but before the winter chill sets in. For most species, a drenching rain of at least one inch is required during this window of opportunity. This combination of needs provides survival insurance: 1 inch of rain in the moderate fall weather will give adequate soil moisture for germinating seeds to grow and generate seeds even if there is nearly no further rain.

Now that we know how Plants in the desert have adapted themselves for Survival, we will now look at which plants grow in a desert 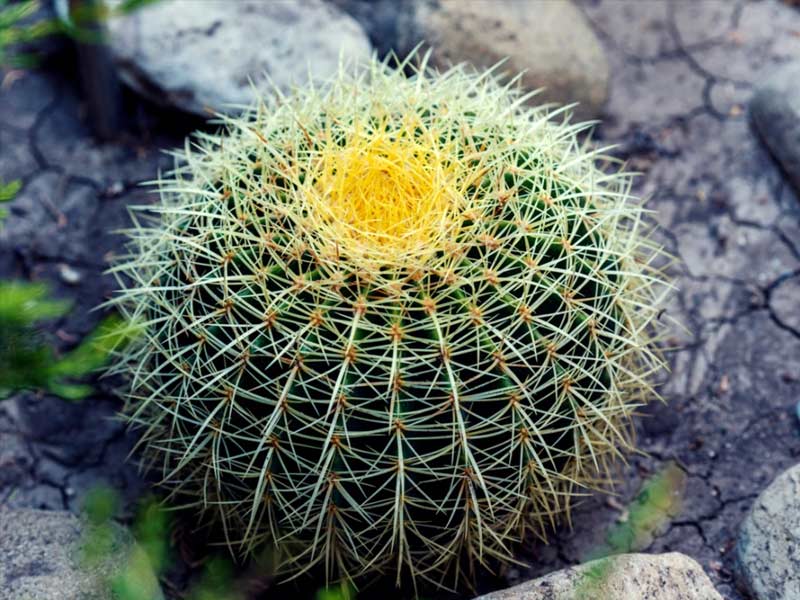 Barrel cactus is spherical, thick plants with rows of strong spines that defend them from grazing animals. Some barrel cactus may reach a height of over 1 meter (3.3 feet) and survive for over 100 years. The genus Echinocactus and the genus Ferocactus both have species that are known as barrel cacti. Echinocactus and Ferocactus are two genera of barrel cacti that can be encountered in the deserts of Southwestern North America. The Mojave Desert in southern California has some of the biggest examples.

Cacti, like barrel cacti, are one of the desert’s most hazardous vegetation. When human skin gets punctured by their spines, not even antibiotics can help, and it can take months to heal a wound or stop the bleeding. It’s also been stated that if the juice in the cactus is swallowed or simply sniffed, it may be lethal. 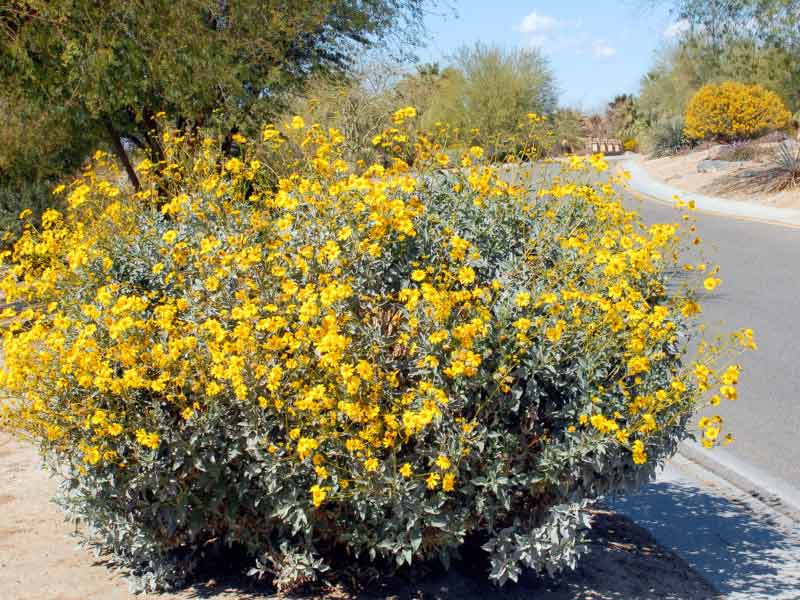 The daisy family includes the Brittlebush. It has evolved to thrive in arid environments, storing water in its thick stems and losing its leaf during the dry season. Brittlebush is a plant that grows in the southwestern United States and Mexico and is named after its brittle stems. It stands from 1 and 5 feet (30 and 150 cm) tall and has a spherical form. It has long, round, silver-grey leaves with a fuzzy texture. The brittle, woody branches contain an aromatic resin and are brittle and woody. And small yellow blooms appear on long stalks high above the green stems in late winter and early spring.

Brittlebush is best known for restoring landscapes and stabilizing damaged regions. It stores water in its thick stems and drops its leaves during the dry season. The Brittlebush is well-known for its aromatic resin. 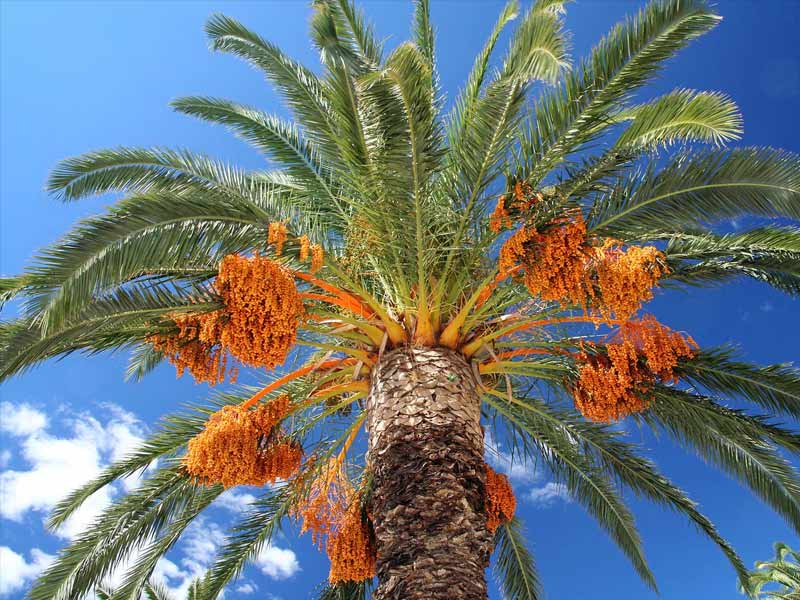 Phoenix dactylifera, often known as date or date palm, is a flowering plant species in the Arecaceae palm family grown for its tasty sweet fruit. The plant is commonly farmed in Northern Africa, the Middle East, and South Asia. It has become naturalized in many tropical and subtropical climates across the world. For thousands of years, the tree’s fruit has been an essential source of sustenance for people living in arid locations; dates were consumed by the ancient Egyptians, who also used the fruit to produce wine.

Also Read, 5 Most Breathtaking Deserts In The World 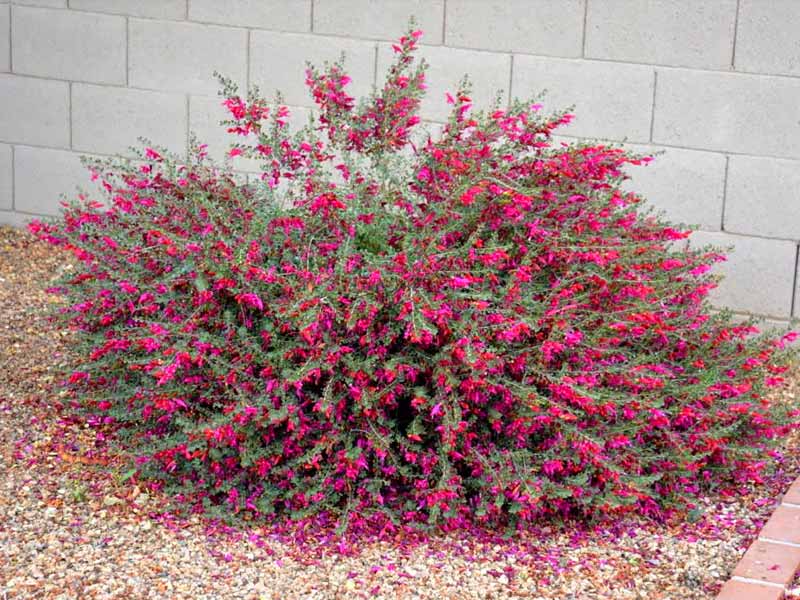 Eremophila means “desert-loving,” which describes the emu plant and other plants in the genus Eremophila’s characteristic environment. This Australian plant may be found in a wide range of arid and semi-arid environments. Emu Bush (Eremophila maculata) is a medium-sized shrub with tiny, spherical green leaves that grow in a dense, symmetrical pattern. This hardy, evergreen shrub is native to Australia.

It is popular in the arid southwest due to its minimal water requirements and extended winter bloom season (as a decorative plant). Northern Territory Aboriginal tribes used emu bush leaf concoctions to cleanse wounds and wounds, occasionally gargled. In the last decade, it was discovered that the plant’s leaves had the same potency as certain well-known antibiotics. 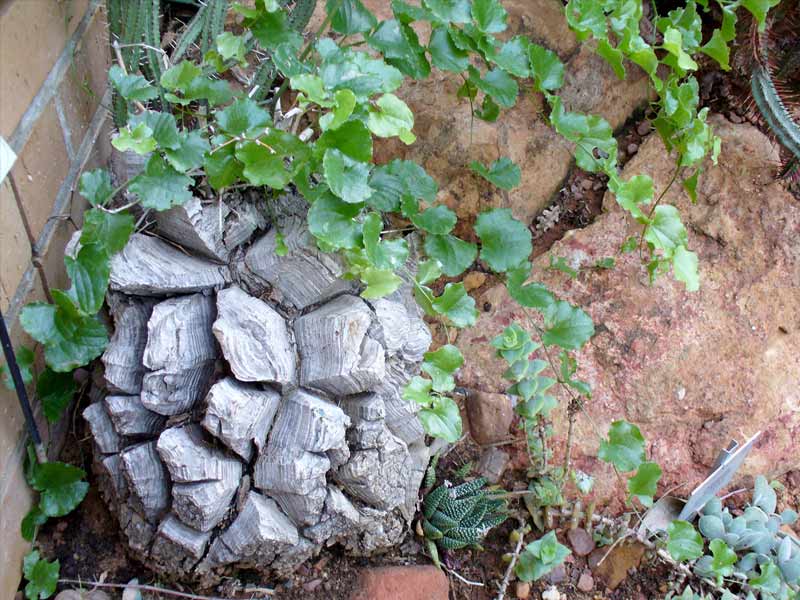 The elephant’s foot is a South African desert shrub. It is a climbing plant with a big tuber that may grow to be more than 10 feet (3 meters) in circumference. The tuber, which is coated in thick, scale-like layers, mimics an elephant’s foot, thus the plant’s English name. These plants’ leaves are edible and have a tangy flavor. Elephants, wild wildlife, and tortoises graze and consume the plant in its natural environment. Elephants chew sections of the plant and spit out the leaves and seeds, which aid in plant propagation. It blooms in the southwest desert in late winter to early spring and produces pink, star-shaped flowers. The blossoms are an excellent source of nectar. 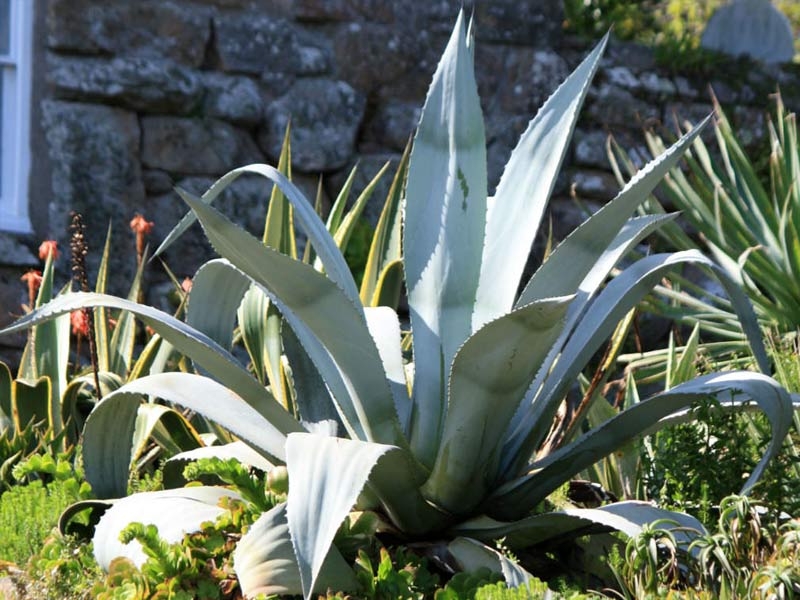 Agave americana, also known as sentry plant, century plant, maguey, or American aloe, is a plant species in the Asparagaceae family indigenous to Mexico and the United States in Texas. It is now grown as an ornamental plant all over the world. The species has a cluster of huge, broad leaves with spiky edges and a pointed center spike. However, not as long-lived as its name indicates, the century plant can live for up to 30 years. It only blooms once, toward the ending of its life. This plant’s sap is toxic and can cause extreme skin irritation or intestinal issues. 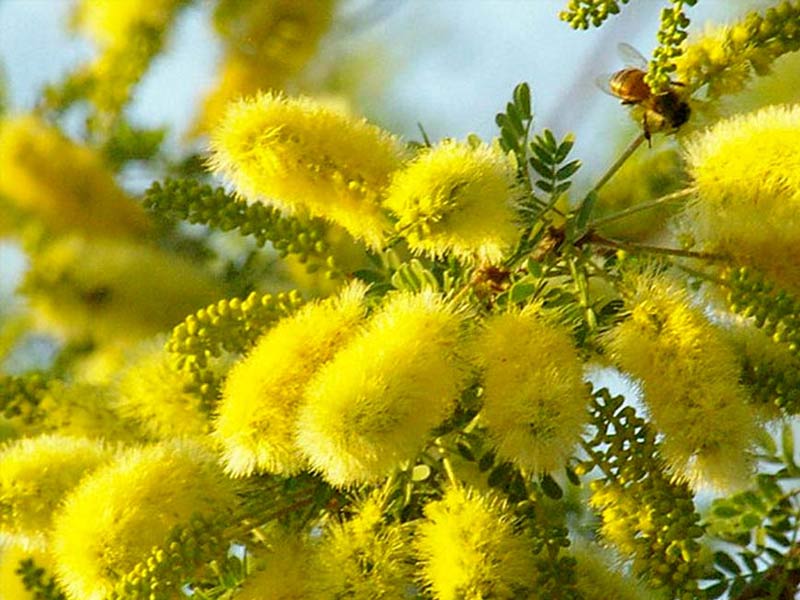 Cat’s claw acacia grows as a shrub or small tree in dry regions of the United States and Mexico. The cat’s claw acacia is also known as the ‘wait-a-minute-bush’ because of its sharp, curving spines. Depending on the availability of water, it can grow to be 6 to 25 feet tall. Once grown, catclaw acacia requires minimal upkeep and attention. Cat’s claw is a well-known herbal supplement made from a tropical plant. It is said to aid in treating a variety of conditions, including infections, cancer, arthritis, and Alzheimer’s disease. Catclaw acacia has evolved extremely deep roots to live in the desert. Roots may reach depths of up to 18 feet into the earth.

We now have an idea of how adaptations of plants in the desert allow them to not only survive but thrive in those harsh environments. Truly the Survival of the fittest.