Home Arts & Entertainment Poetry Because I could not stop for Death: Find Beauty in Death with... 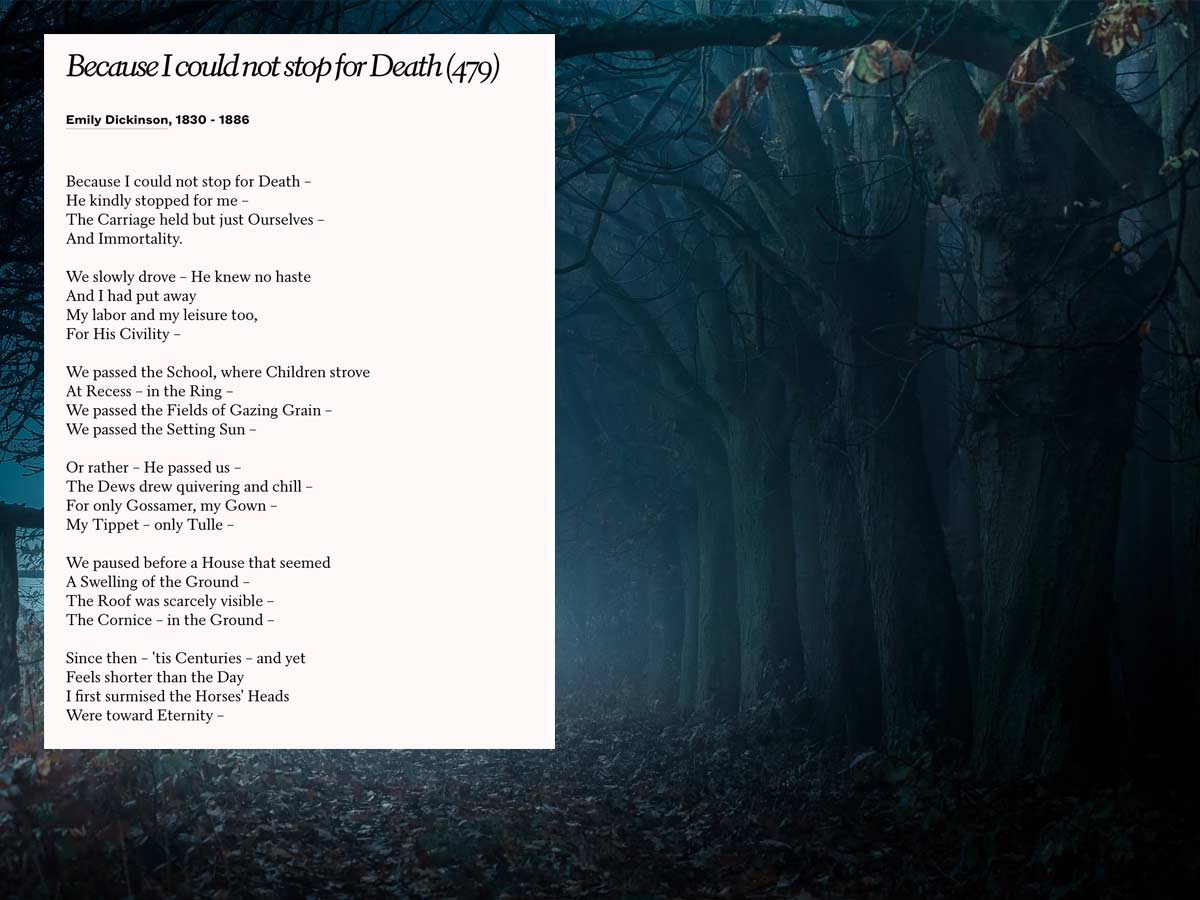 One of the renowned lyrical poems by one of the famous American poets, Emily Dickinson. The poetess was known to have an eccentric and isolated personality. Her personality became more mystical after her penchant for wearing white clothes. She has written about 1800 poems in her lifetime, but only a dozen of them got published when she was alive.

And one of her most widely read poems is “Because I could not stop for death”. This lyrical poem by Emily Dickinson got posthumously published in ‘Poems: Series 1’ in the year 1890. The poem was published under the title ‘The Chariot. The poem personifies Death as a gentleman who accompanies the speaker on a carriage ride to the grave.

CRITICAL APPRECIATION of BECAUSE I COULD NOT STOP FOR DEATH

“Because I could not stop for death-

He kindly stopped for me-

The carriage held but just ourselves-

The poem begins. These lines convey the message of the narrator or speaker that he was not ready for death. And this shows the personification of death by the poetess as a gentleman who has come to take her away in a carriage that moved towards immortality. However, these lines are contradictory semantically, as how can a person be immortal? But when thought twice and carefully, we get to realize that a mortal person, i.e. a living person, can die, but how can an already dead person die? And hence it makes sense when the poetess says that both she and death are heading towards immortality.

Also Read, Ode on a Grecian Urn: The Beauty of Odes by John…

In the next stanza, the poetess explains calmly that they both (death and poetess) are not in any hurry. Also, she puts her labor and leisure aside and she is saying that for her civility. She wants to portray that; the death was civil to her, and that is why she has kept those things aside which she was doing and had to do, including her hobbies and work where she finds pleasure and peace. Then, in the next stanza, Emily has tried to express a dual view through his intellectual lines.

When she says, “We passed the school, where children strove At recess- in the ring-“, she meant that the carriage not only passed through the school where children were playing in the recess but also she tried to symbolically represent her childhood. With the lines that the carriage passed by the school, she tried to tell us that her childhood has passed away. In the next few lines, too, she has expressed some similar symbolical meanings that have been mentioned for a better poetic experience for the readers.

The carriage passes through the fields of grazing grains. This metamorphically portrays the youth of the speaker. Then both the death and speaker pass the setting sun. And here the phrase, “setting sun”, symbolizes ‘old age’.

The poetess in the poem has beautifully and wisely portrayed the entire journey of her life from her childhood to youth to old age has passed peacefully and smoothly. The life of human beings is just like the dewdrops, fresh and quivering alive and the forever chilled demonstrating quietness. The poetess is now ready to meet her death. She wore her gossamer gown and shawl, made up of a very soft material. Here, the poetess has very intellectually symbolized her body, which is as soft and delicate as the clothes she is wearing.

In the next stanza, the poetess is telling about her permanent house, i.e. her grave. And after death, the material reality, which she has experienced as a living person, is of no importance. Both the roof and the ground are one and the same. Then in the final and last stanza, the poetess is feeling coolness and solemnness and is feeling the true eternity. Now, she is in the grave for a very long time, but even the centuries seemed as if they were shorter than a day. In the lines concluding the poem, she realizes that the carriage attached to the horses was leading to eternity.

“I first surmised the Horses’ Heads,

In this poem, “Because I could not stop for death”, Emily Dickinson has beautifully and smoothly had expresses the whole process, the journey of life towards death. The journey, expressed by the poetess is so beautiful, peaceful, calming, civil, and quiet that readers can’t stop admiring it.

The poem conveys the message that death is not at all frightening, in fact, it is a beautiful journey with a death personified as a gentleman taking us towards the grave. Death cannot be more civil than this. The poem expresses the beautiful way of meeting death and heading towards eternity.

Jabberwocky: A Nonsensical poem with a Beautiful Meaning