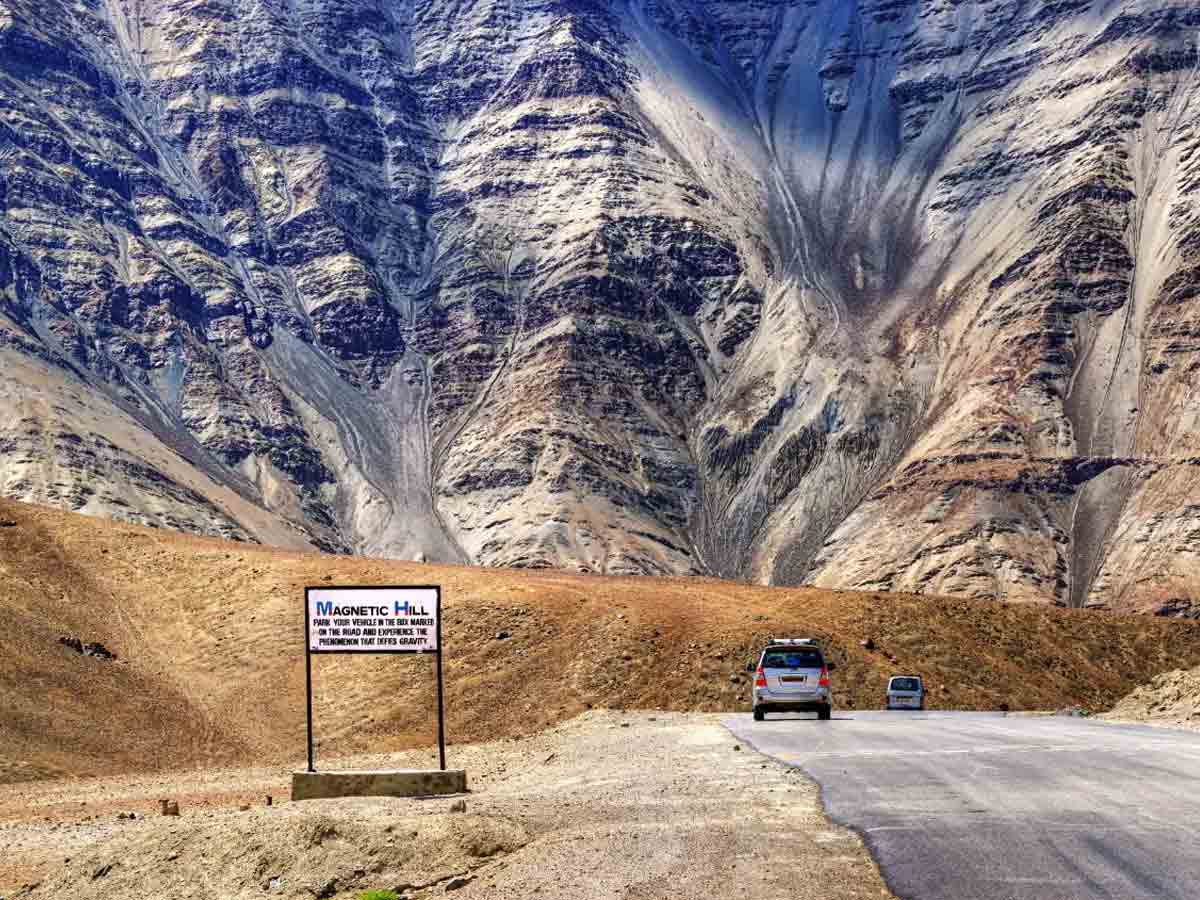 A small stretch of road located 30 kilometers from Leh on the Leh-Kargil Highway defies gravity. The magnetic hills, which pulls stationary vehicles upwards, is the reason. It is also called the Magnetic Hill in the region of Ladakh and is one of the famous tourist destinations. It also serves as a convenient rest stop for tired riders on the highway.

As there are numerous theories that support this strange natural wonder that we live in. Except for superstitions such as “the magnetic road is a straightaway to heaven,” all of them propose a different logic and are supported by strong reasoning.  Here’s what each of these beliefs and theories has to say about the mysterious Magnetic Hills.

THE MYTH ASSOCIATED WITH THE MAGNETIC HILLS

Villagers who live in the area of these mysterious magnetic hills of Ladakh have a belief that there was once a road that led to heaven. Those who deserved it were drawn directly to the path, while those who didn’t could get there.

Following that is a reasonable theory, which is also the most widely held. It claims that the hill emits a strong magnetic force that pulls vehicles within its range. Travelers from all around the world have been a witness and have testified to the strange and weird occurrence on the Leh-Kargil highway. In fact, the infamous hill has forced Indian Air Force planes to divert their route in the past to avoid magnetic interference.

THE OPTICAL ILLUSION THEORY ASSOCIATED WITH THE MAGNETIC HILLS

Another widely accepted theory associated with the Magnetic Hills holds that the hill is not a source of magnetic force, but rather an optical illusion that makes the road leading to Magnetic Hill Ladakh, India, appear to be an upslope. As a result, when you see the vehicle moving uphill, it is actually moving downhill.

ANOTHER PHENOMENON ASSOCIATED WITH THE MAGNETIC HILLS

Some people believe Magnetic Hills are the same as Gravity Hills, which can be found all over the world. Tulsishyam in Gujarat, Electric Brae in Scotland, and Gansu in China are some well-known examples of Gravity Hills.

Also Read, 8 Dishes from Ladakh , You’ll Regret if Missed For Sure

Do you want to know which months are the best to embark on your enthralling journey to this mystical hill? The months of July and September are ideal for visiting the Ladakh Magnetic Hill. At this time of year, the roads are clear and the weather is ideal for exploring Ladakh and its natural beauty.

Magnetic Hill, located on the Trans-Himalayan region’s Leh-Kargil-Baltic National Highway at an elevation of 14,000 feet, is a beautiful sight. The Sindhu River flows to the east of Magnetic Hill, framing the landscape. The mysterious magnetic road in the Ladakh is where travellers can stop to witness the strange, gravity-defying phenomenon. It is blessed with amazing natural beauty and mysterious magnetic abilities.

A yellow-coloured box is marked on the magnetic road, just a few metres from the mysterious Magnetic Hill road in Ladakh, gives the indication that the vehicle must be parked in neutral gear.

HOW TO REACH MAGNETIC HILLS?

By Air- The nearest airstrip to these beautiful and mysterious magnetic hills is the Leh International Airport, which is very well connected to the other major airports in India. The Ladakh Magnetic Hill is located on the Leh-Kargil-Baltic National Highway and can be reached by taxi from the airport.

By Train- Jammutawi, 700 kilometres from Leh Ladakh, is the nearest railhead. Jammutawi is well-served by railways that connect it to Delhi and other major Indian cities. A taxi can be used to complete the remaining distance.

By Road- If you are coming from Delhi, the Manali-Leh highway is the most direct and convenient route to Leh. From a magnetic hill in India’s Himachal Pradesh to Leh Ladakh, state buses and private buses run frequently. Travelers prefer to drive their own vehicle from Manali to Leh (490 km).

Magnetic Hill is surrounded by barren land for miles, so a day trip from Leh is recommended. You can visit Magnetic Hill on the same day that you plan to visit the local Sham Valley attractions such as Gurudwara Pathar Sahib, the Nimmu Confluence of the Indus and Zanskar, the Basgo Plains, Alchi, and Likir monasteries, or nearby monasteries from Leh.

Travelers are advised to consult their doctors before embarking on this journey, as it can be exhausting and demanding, and the climatic conditions can be extreme. Aside from being unbearably cold in the winter, AMS (acute mountain sickness) is bound to strike even the most seasoned travellers due to the high and vertiginous altitude. Carry altitude sickness medications and allow plenty of time to acclimate when you arrive in Leh.

On your way to the Magnetic Hill from the Leh, you can have a stop-over at the Gurudwara Pathar Sahib, which is about 23 kilometres away. This Gurudwara was built during the beginning of the 16th century in order to commemorate the Guru Nanak Dev’s visit to Ladakh. It is very much important to note that there are very few options of fooding and lodging near these mysterious Magnetic Hill, so it is best to make a day trip from Leh and return by evening. Also, stock up on food and water before heading to Magnetic Hill in case you don’t like what’s on offer in Nimmu village.