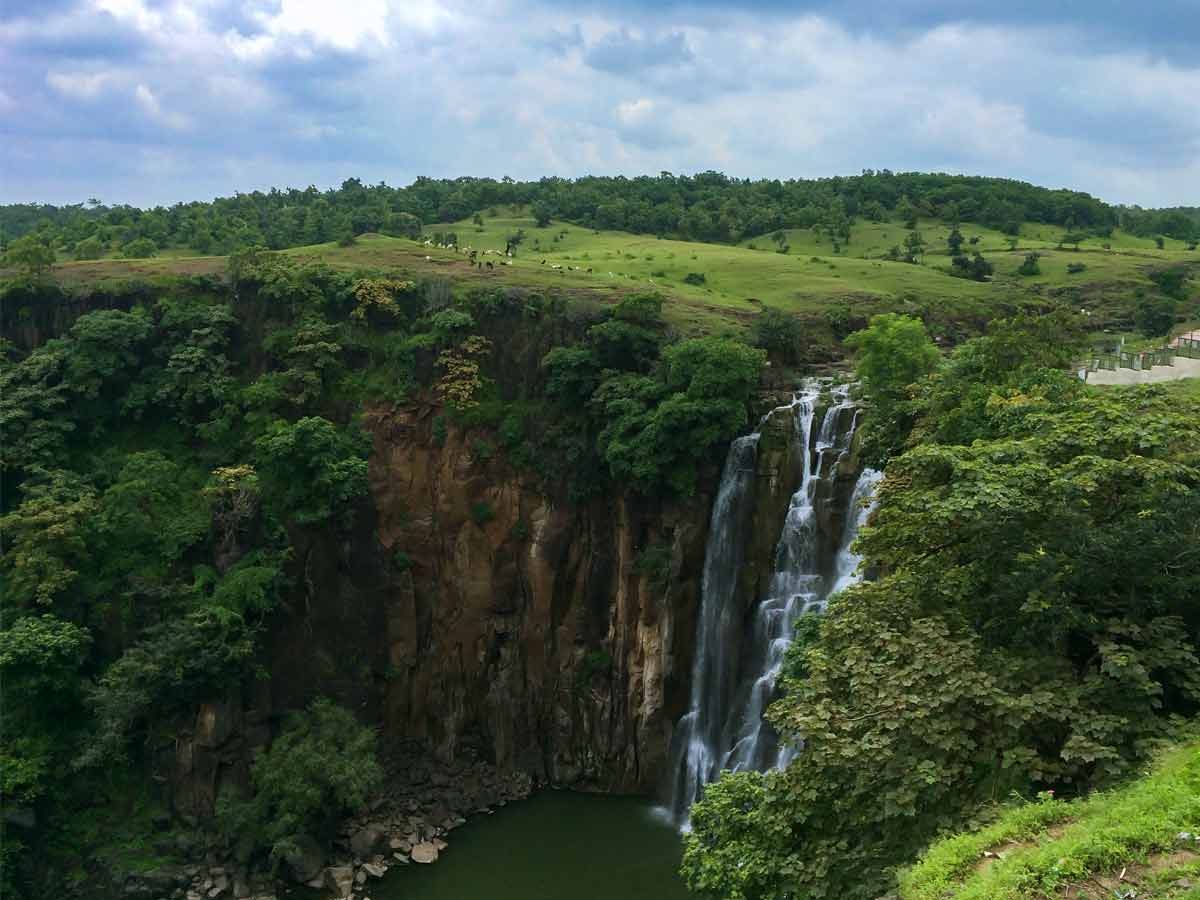 Patalpani Waterfalls, the mesmerizing waterfall is located in the Indore district of Madhya Pradesh. The spectacular waterfall towers over 300 feet. Patalpani Waterfall serves as a popular picnic and trekking destination. Immediately following the rainy season, the water flow is at its peak (usually after July). During the summer, it almost completely dries up, and the stream becomes a trickle. The folklore of the place claims that the pit (kund) at the base of the falls is as deep as Patal. As a result, the falls are known as Patal-pani, with pani referring to water in Hindi.

Patalpani Waterfall is located near Indore. It is located 35 kilometers south of Indore. On weekends, a large number of people come here. The picturesque waterfall becomes photogenic during the rainy season when the waterfall receives adequate rainy water and the fall is at its peak. Because it is a seasonal waterfall, it provides a serious surprise of water during the rainy season, resulting in numerous accidents.

Because it is located in a down-flow, during the monsoon season, the water flow here suddenly increases due to rainfall in nearby areas, leaving no time for rescue, so it is best to observe from a distance. The waterfall has a great scope of adventurous activities hence swerves it as a perfect spot for adventure lovers.

The monsoon season, from June to October, is the best time to visit the Patalpani Waterfall.

HOW TO REACH PATALPANI WATERFALLS?

The closest airport is 40 kilometers away, at the Indore Airport. And, while there is a Patalpani station, it is connected by a narrow corridor, making it inaccessible to other major cities. Indore railway station is 35 kilometers away and the nearest major railway station. There are regular taxis that run from Indore to Patalpani, or you can drive your own car up to the falls. There are also regular buses to Mhow, which is only 6 kilometers from Patalpani, and from there you can ride a taxi up to the falls.

ALSO READ: Omkareshwar: One of the 12 Jyotirlinga to Worship

NEARBY ATTRACTIONS OF PATALPANI WATERFALLS

This zoo, also known as the Kamla Nehru Prani Sangrahalaya, covers an area of more than 51 acres and is home to a diverse range of mammals, birds, and reptiles. There are 57 animal species and approximately 628 specimens in a lush Green environment right in the heart of the city. Every day, a large number of tourists visit this location.

Choral Dam, located approximately 19 kilometers from Patalpani Falls, is an excellent monsoon destination. All visitors can also use the dam’s boating facilities, which include speed boats and paddle boats. The area is not overcrowded, and one can always enjoy some quiet time with great views and as far as the eye can see green pastures.

Tincha falls, located in Madhya Pradesh’s Indore district, are about 30 kilometers from Patalpani falls. The falls get their name from the nearby Tincha village. The falls flow through a narrow canyon before plunging off a cliff at a height of more than 300 feet, surrounded by deep green valleys. It is a popular monsoon destination among locals, and it is ideal for a short day picnic amidst the picturesque backdrop of green landscapes, majestic hills, and valleys. There is also a small pond nearby where visitors can go for a swim or take a dip in the water.

Pipliyapala Regional Park, located on A B Road near the Choithram Hospital crossing, is a lovely park with a wide range of activities for visitors of all ages. The park features a large lake that flows along its entire length, as well as a canal that runs the length of the pond from one end to the other. The park encompasses an area of 80 acres, 42 acres of which are occupied by the lake, and the remaining 38 acres are occupied by land facilities. Locals call the Pipliyapala Regional Park Atal Bihari Vajpayee Regional Park, after India’s former Prime Minister.

The Lal Bagh Palace, built during the Holkar era, is located about 30 kilometers from Patalpani Falls via the Khargone-Indore Highway along the banks of the Khan River. It is an architectural marvel with European and Mughal influences that offers a glimpse into the illustrious past of the Holkar dynasty. The palace was used for royal deliberations and royal functions. The palace’s gates are said to be a replica of Buckingham Palace’s gates. The marble columns, stained glass furniture, ornate chandeliers, and fine antiques only add to the rich history of the Holkar clan’s glory days.

The temple is located on the Khargone-Indore Highway, approximately 30 kilometers from the Patalpani Falls. The temple is dedicated to the Goddess of Food, Annapurna. Within its premises, the temple also houses shrines to Lord Shiva, Lord Hanuman, and Lord Kalabhairava, as well as a Pravachan Hall where spiritual leaders engage in enlightening conversations with devotees.

The architecture and structural intricacies of the Annapurna Temple are said to bear a striking resemblance to those of the Meenakshi Temple in Madurai. The temple entrance gates are adorned with four life-size elephant sculptures, which welcome visitors with rustic charm.