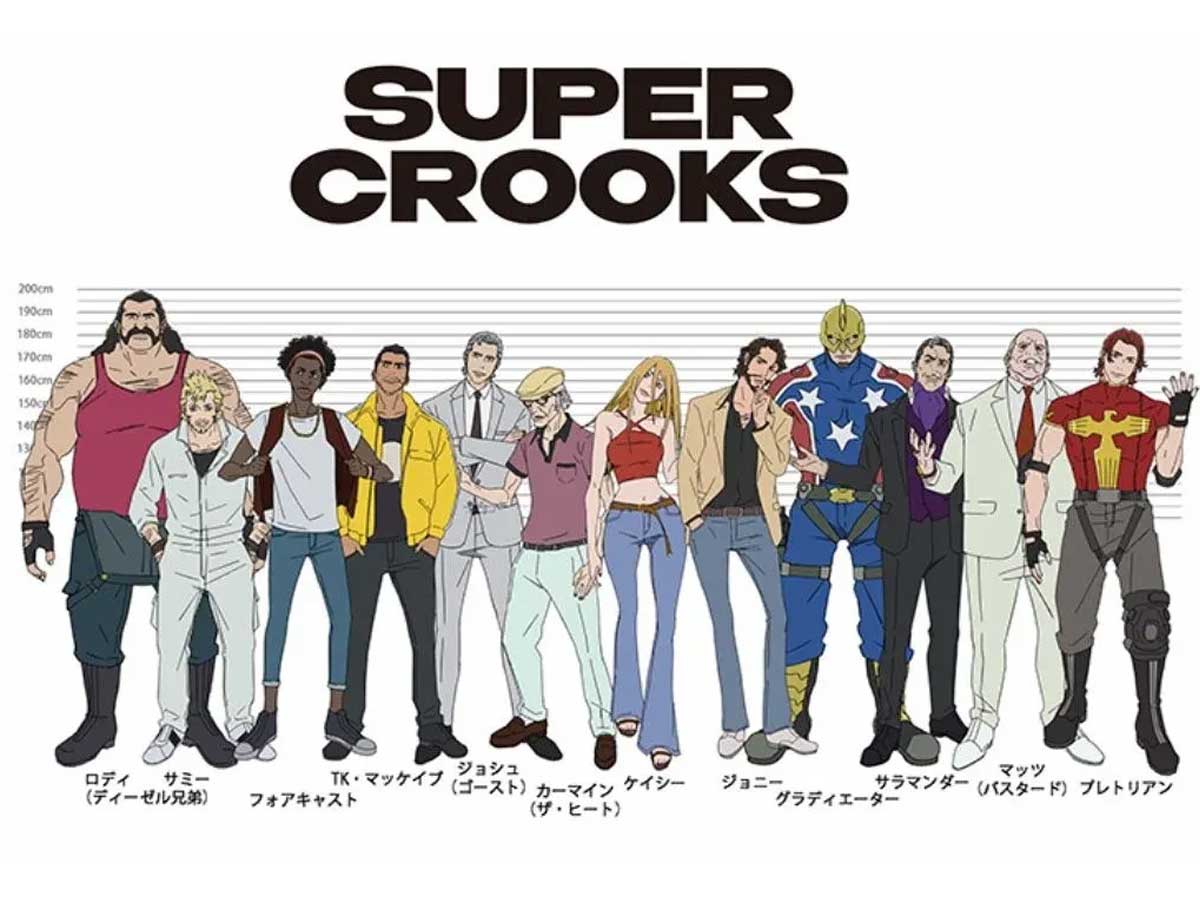 For the anime lovers, this year has brought up one more amazing anime television series and i.e. Super Crooks. This Japanese superhero anime series is based on the comic book series of the very same name as the writer Mark Miller and the artist Leinil Francis Yu. The anime is 13 episodes and has been premiered on the OTT platform of Netflix on the 25th of November of this year. This amazing anime is a spin-off of Jupiter’s legacy. The series is the directorial debut of Motonobu Hori. Let’s know a little more about this new anime and find out whether to stream it or skip it!

The anime opens up with a TV broadcaster telling us, “an invincible team of the greatest heroes”, which involves the fearless leader The Utopian and another hero that is named The Flare. However, the story of Super Crooks revolves around a kid named Johnny Bolt who is stuck in a nowhere town with his deadbeat mom and has nothing to look forward to but watching Union of Justice on television and hanging out with his best buddy, artist, and superhero obsessive, Tom.

But the things appear to be looking up when Johnny discovers something by accident. And that discovery involves that Johnny can control the electricity with his mind. And about this discovery, he tells Tom, of course, as he was his best buddy and also humblebrags by switching the traffic lights so that he can ride his bike through the crosswalk.

Also, the girlfriend of one of his enemies, Janice, is the unattainable girl of the dreams of Johnny. And Janice has once said that she once encountered a member of the Union of Justice in Oakland, in California and she dreams of meeting a hero again in her life. Then, Tom and Johnny give Johnny a superhero look by crafting him a sleeveless muscle-T, felt lightning bolts taped to the ski mask, the whole bit and they plot their big reveals for the summers.

They have planned of using the still-fresh powers of Johnny, he will hover over the community pool, and will announce his ownership over the whole town. However, Johnny then suffers from some serious injuries and significant ancillary damage and realizes that his powers can also control the ATMs and so on.

Basically, Super Crooks is the story of Johnny Bolt who is a criminal with the petty power of controlling the electricity. The anime has everything that is expected in the classic heist genre, from jailbreaks, huge battles to car chases and huge battles. The action in the anime is pretty well-executed and the plans flow in fun ways. The characters in the anime are funny and engaging that is very likable to the audience. Both in English and Japanese, the voice acting is also up to the mark. The fans of anime will be pleased with the subs and the dubs of this anime.

However, the script is hit or miss throughout as a few jokes fall flat and a few of them hit the mark. Also, sometimes a plot element or two goes in some unwanted and unpleasant directions. The series portrays some of The Boys-esque elements of satire to the series, by portraying some of the superheroes as self-centered and corrupt and some of them even as criminals. However, it is fun to watch the characters involved in the series. The main antagonist is somewhere that appears functionally identical to the Wilson Fisk of Marvel.

A time skip occurs in the series that brings the storyline to a screening halt that resets the stakes completely and this really hurts the climax of the plot. The twists and turns in the series somewhere kill the flow of moments. Also, there are some great set pieces in the anime, Super Crooks too, as the animators at the very famous Studio Bones find out uncountable funny ways to use the fairly simple powers of the main casts. The studio has worked pretty well to show the worth of the look of the action of superheroes all alone and this is clearly visible in the series.

The best part of the anime is its execution of heists and the way the disparate players come together and make their powers work in the concert needs an applaud for sure. The dynamic action in the anime is incredible. The Super Crooks is a seamless melding of two genres having all the expected aspects from each of them. So, what are you waiting for? Just go and binge-watch this amazing anime of the year!