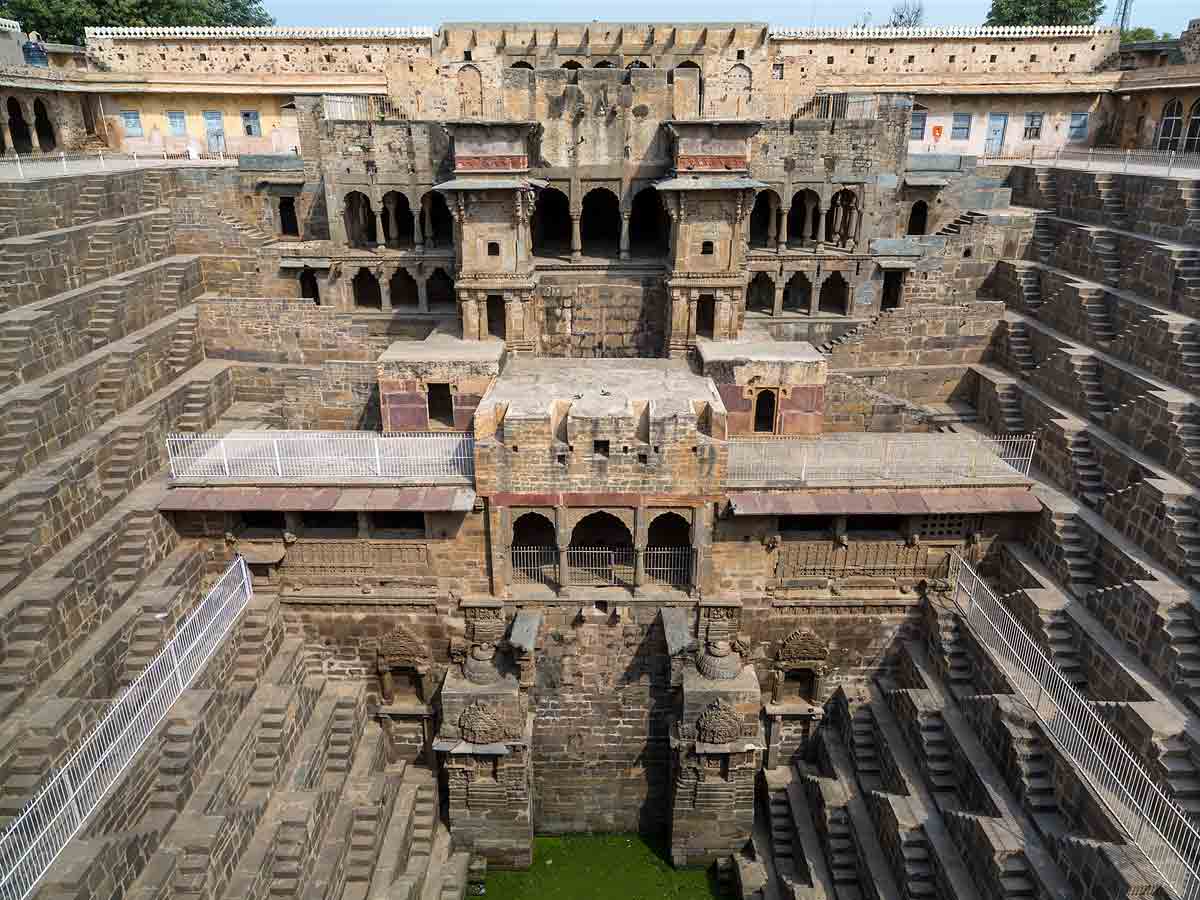 Abhaneri is a village in Dausa district of Rajasthan and it is approximately 95 kilometres from Jaipur. The settlement was previously known as Abha Nagri, which means “city of brightness,” but the name was altered to Abhaneri over time owing to a mispronunciation.

Ghoomar, Kalbeliya, and Bhavai are among the Rajasthani folk dances performed in Abhaneri hamlet. Ghoomar is a Bhil tribal dance, whereas Kalbelia is a Kalbelia tribal dance performed by women who live off collecting snakes and selling their venom. Bhavai is a ritual dance done before Amba Mata, also known as Mother Earth.

The city of brightness, or Abha Nagri as it was previously known, is now in a decrepit state; yet this little hamlet continues to attract visitors from all over the world. Abhaneri is known for its baoris, which were used to collect rainwater throughout the summer. Chand Baori is the most well-known of the stepwells here and is well known for its magnificent stone construction. It’s one of the largest and deepest stepwells in India. Harshat Mata Temple is also a renowned tourist destination that showcases mediaeval India’s magnificent architectural magnificence. Harshat Mata is the goddess of pleasure and happiness, and the temple is devoted to her.

Chand Baori was named after a local monarch named Raja Chanda, according to legend. However, no epigraphic evidence for the construction of the Chand Baori or the adjacent Harshat Mata Temple has been discovered. The Baori can be dated to the 8th-9th century based on parallels in style and sculptures with the tiered temples of Paranagar and Mandore. It was most likely built before the temple.

According to Morna Livingston’s book Steps to Water: The Ancient Stepwell of India, the Chand Baori is one of the rare Step wells that has “two classical phases of water construction in a single location.” The step-well’s earliest portions date from the 8th century onwards. A higher palace building was constructed on the site, which can be seen from the Chauhan kings’ tabulated arches and the Mughals’ cusped arches. Tourists are no longer allowed access to these rooms. During the Mughal Empire, the top floors with the columned arcade around it were erected during the 18th century.

The Mughals surrounded the well with art galleries and a keeping wall. Old sculptures and carvings, which were said to be in the temple or in other chambers, are still visible today. The adjacent Harshat Mata Temple was a pilgrimage destination that, along with the spring, constituted a complex. Many of these step-wells, like Chand Baori, were used for a variety of purposes, including water collection and religious or ceremonial ones.

In the current monument, this unique style of underground well-architecture has remained consistent since the 7th century. The Archaeological Survey of India presently keeps the temple’s excavated stones in the well’s arches. Chand Baori is an essential element of western India’s primary stream of architectural development. The Chand Baori is a four-sided deep hole with a vast temple on the rear face. The monumental well’s fundamental architectural features include a lengthy corridor of stairs down to five or six floors below ground level, which may be seen on the site. Chand Baori is a 13-story building with 3,500 tiny stairs.

It reaches around 30 meters (100 feet) into the ground, making it one of India’s deepest and largest step wells. Because Rajasthan is dry, the design and final construction of Chand Baori were created with the goal of conserving as much water as possible. The building of wells, canals, tanks, and dams, as well as their effective management and upkeep, were mentioned in ancient Indian texts. Many of these enterprises were merged at this location to provide for easy access to local water.

The air is 5-6°C cooler at the bottom of the well than at the top, and Chand Baori was used as a community meeting spot for people during seasons of extreme heat. A Haveli pavilion and royal resting chamber may be seen on one side of the well.

The original temple appears to have been constructed in the Panchayatana style, which comprises a main shrine surrounding by four smaller shrines. Only a few sections of the main shrine remain, and they’ve been destroyed and altered throughout the ages, with the towering shikhara tower being replaced with a roof-dome. Much of the platform exists, along with parts of the original structure’s carved stones, but most of the sculptures have been transferred to museums in Amber and Jaipur.

The temple’s construction is unknown, although historians assume it was erected in the early ninth century, shortly after the Chand Baori step well. The original function of the temple is unknown, although historians believe it was erected by a Gurjara-Pratihara monarch in collaboration with a local Chahamana vassal. The Archaeological Survey of India currently protects the temple, although it is still used for religious purposes.