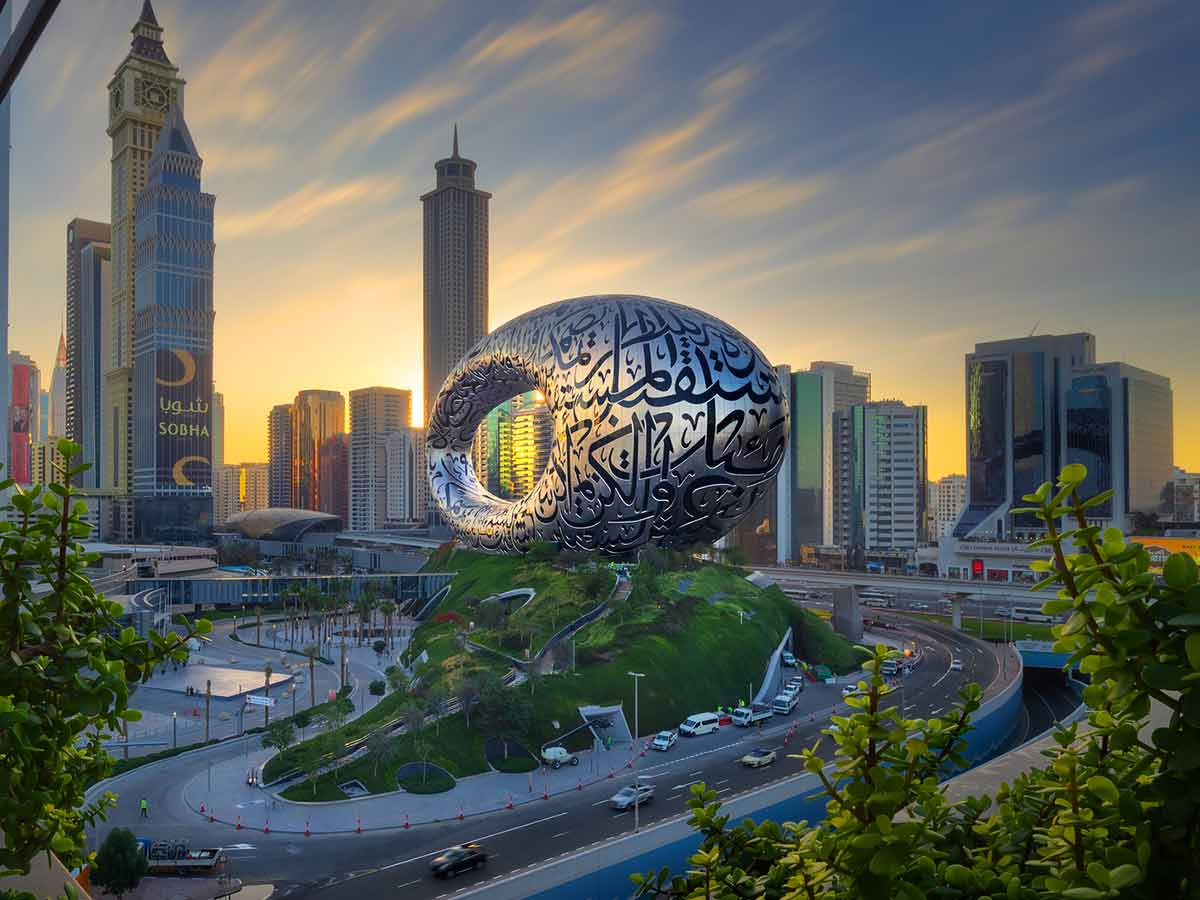 The Museum of the Future showcases cutting-edge and futuristic ideologies, services, and products. The Museum of the Future, located in Dubai’s Financial District, consists of three main elements: a green hill, a building, and a void. The Dubai Future Foundation established it. It was supposed to open in 2021, but it hadn’t done so as of December of that year. The museum was later opened by the government of the United Arab Emirates on February 22, 2022. The date was officially chosen because February 22 2022, is a Palindrome date.

The mission of this museum is to promote technological development and innovation, particularly in the fields of robotics and artificial intelligence. While the Museum is still under construction, it has hosted several individual exhibitions in recent years.

History of Dubai’s Museum of Future

After showcasing the Museum of the Future during the Government Summit in February 2015, Mohammed bin Rashid Al Maktoum, ruler of Dubai and Vice President and Prime Minister of the UAE, announced plans to establish it on March 4, 2015.

As part of the World Government Summit 2016, Mohammed bin Rashid inaugurated the Museum of the Future exhibition on February 7, 2016.

Structure of a Building

The Museum of the Future, one of the world’s most complex structures, was designed by Killa Design architecture studio and engineered by Buro Happold. The building aims for a LEED Platinum rating in terms of green rating.
Emirati artist Matar Bin Lahej created the Arabic calligraphy engraved quotes on the Museum of the Future in Dubai.

This torus-shaped shell sits atop the building and comprises 1,024 fire-retardant composite panels clad in stainless steel, each with a unique 3D shape to create the Arabic script.
Killa Design and Buro Happold collaborated to create new parametric design and Building Information Modelling (BIM) tools, including a growth algorithm that uses digital means to expand the internal steel structure. Danem Engineering Works was one of the project’s steel structure contractors.

The museum is divided into seven floors, each of which houses a different exhibition. Three floors are dedicated to developing outer space resources, ecosystems and bioengineering, and health and well-being. The other floors feature near-future technologies that address health, water, food, transportation, and energy. In contrast, the last floor is dedicated to children.

The museum’s futuristic shape is defined as a torus with an elliptical void in the architectural world. Still, a giant hula hoop may be a more accessible reference point. The Museum of the Future’s executive director, Lath Carlson, prefers to compare it to an eye. “It’s a little difficult for us to describe the building to people who haven’t seen it,” he admits. “There’s nothing that comes close to evoking the shape.”

The shape was designed by Killa Design, a local architectural firm that won the museum’s design competition in 2015. According to the architect, the solid part of the structure represents our current knowledge. The void represents everything we don’t know yet – in other words, the future.

The building’s unusual profile isn’t the only thing that distinguishes it from the hundreds of other construction sites across the emirate. More of the Arabic calligraphy that will adorn the exterior of the 78m-high museum comes into view as each facade panel is fixed in place. The museum’s directors have not revealed what the words say.

Still, they are known to be poetry phrases written by Dubai’s ruler, Sheikh Mohammed Bin Rashid Al Maktoum, the vice president and prime minister of the United Arab Emirates. The cursive scripts also serve as the museum’s windows. By day, they cast dappled light throughout the column-free interior; at night, they will be dramatically illuminated by 14 kilometres of light.

The project’s lead consultant is UK-based BuroHappold Engineering, claims it would have been impossible to accomplish without parametric design and Building Information Modelling. The process of metric design is based on algorithmic thinking. It allows specific variables or parameters to be manipulated to change the outcome of an equation. Bim is a three-dimensional model-based technology that allows construction professionals to design and document projects collaboratively. Even though Bim has been around for a long time, the industry has been slow to embrace it.

What can you expect at the Museum of the Future?

The landmark development will improve humanity and a stronger global economy by demonstrating how next-generation solutions – incorporating everything from artificial intelligence to augmented reality – can improve our lives in 50 years.

Visitors will be able to interact with this game-changing technology. Each floor of the museum is designed to look like a large, interactive movie set, with expert storytellers, technologists, and visionary artists bringing it to life. The future of space travel and living, climate change and ecology, health, wellness, and spirituality are considered. Aside from groundbreaking innovations, there will be special workshops and talks from some of the world’s most brilliant minds.

Children aged three to ten can enjoy an open-world experience in the Future Heroes environment. This dedicated area encourages young people to reach their full potential.

Tickets, which can be purchased on the official website, cost AED145, with children under the age of three, people of determination, and Emirati senior citizens receiving free admission.