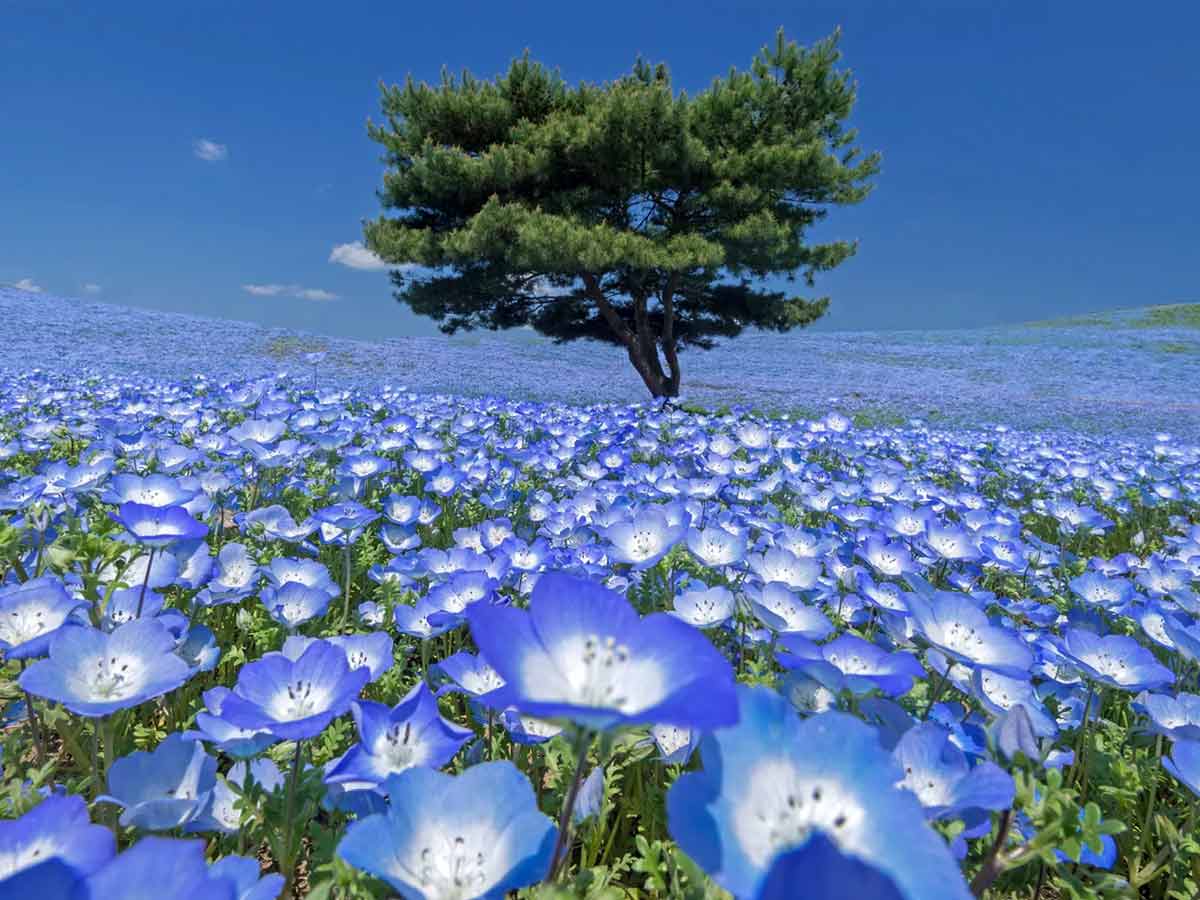 Hitachi Seaside Park is a large park near Mito in Ibaraki Prefecture with 350 hectares of green space and seasonal flowers, as well as an amusement park and several cycling and walking trails.

The park was established in 1991 on the site of a former US military base. This location is now a true floral kingdom, with a wide variety of plants such as tulips, cherry blossoms, lilies, daffodils, and poppies.

The blue nemophila, which covers Miharashi Hill in the spring and mimics the color of the sky, is the park’s iconic flower. The flowers usually bloom from late April to mid-May. Paths wind their way up the hill, providing views of the Pacific Ocean and the rest of the park. The hill is covered in green kokia bushes in the fall, which gradually turns red as the weather cools. These autumnal colors are typically at their peak from early to mid-October.

Although the nemophila is the most well-known flower in the park, other flowers bloom throughout the year. Near the park’s main entrance is a large forested area with the Suisen Garden, where narcissus bloom in mid-March and tulips bloom across the lake in late April.

Also Read: 10 Things To Do In The Beautiful Jeju Island

The park, which spans 190 hectares, is home to blooming flowers all year. The park has become known for its baby blue-eyes flowers, with 4.5 million of the translucent-petaled blue flowers blooming in the spring attracting visitors. Aside from the annual “Nemophila Harmony,” the park has a million daffodils, 170 varieties of tulips, and numerous other flowers. Cycling trails and a small amusement park with a Ferris wheel are part of the park.

Although flowers are a seasonal highlight, the park is open all year. The extensive Hitachinaka Nature Forest has walking trails, and the Dune Garden displays plants native to Japan’s coastline. Even when the rest of the park is crowded, this area is frequently quiet.

Hitachi Seaside Park also has a small amusement park with over 25 rides and attractions, such as a 100-meter-tall Ferris wheel, putter golf, a BMX course, and a roller coaster. The majority of the rides and activities have additional fees. There are restaurants and rest areas scattered throughout the park, as well as a BBQ area for picnics.

Because of the park’s size, there are two other ways to get around besides walking. Rental bicycles start at 450 yen for three hours of use, and nearly eleven kilometers of cycling paths – separate from pedestrian paths – provide easy access to the park’s various areas. A small train (on tyres) also circles the park, stopping at various locations. A one-day pass on the train costs 600 yen.

In May, the Japanese Hitachi Park resembles a massive sky-blue blanket due to the blooming of the nemophila, or American baby-blue eyes. The festival “Harmony of the baby-blue eyes flowers” commemorates such an occasion. Thousands of tourists visit Hitachi Park during this time to witness this mind-boggling spectacle for themselves.

Poppies bloom at the beginning of June. The fields turn a brilliant red and are absolutely stunning. By July, the fluffy kochia bushes have completely covered them. Despite their soft appearance, these plants are actually quite thorny.

By September, the kochia has turned orange and crimson-red, which contrasts beautifully with the bright blue sky. Cosmos flowers appear in the middle of autumn. They create an incredible palette when combined with kochia. Everyone should see these views at least once in their lives!
The park contains one of the oldest private properties in Eastern Japan. It was discovered 350 years ago in the city of Inashiki. It was renovated and relocated to Hitachi Park in 2010.

Aside from admiring the magnificent flowers, you can also ride attractions, visit the zoo, and swim in the pool at Hitachi Seaside Park. After a long walk in the fresh air, you can stop for a snack at one of the many cafes.

Furthermore, the park is equipped with cycling trails, making it even more appealing to explore the park’s territory on a bike. You have the option of riding your own bike or renting one in the park. The following are the rental rates: