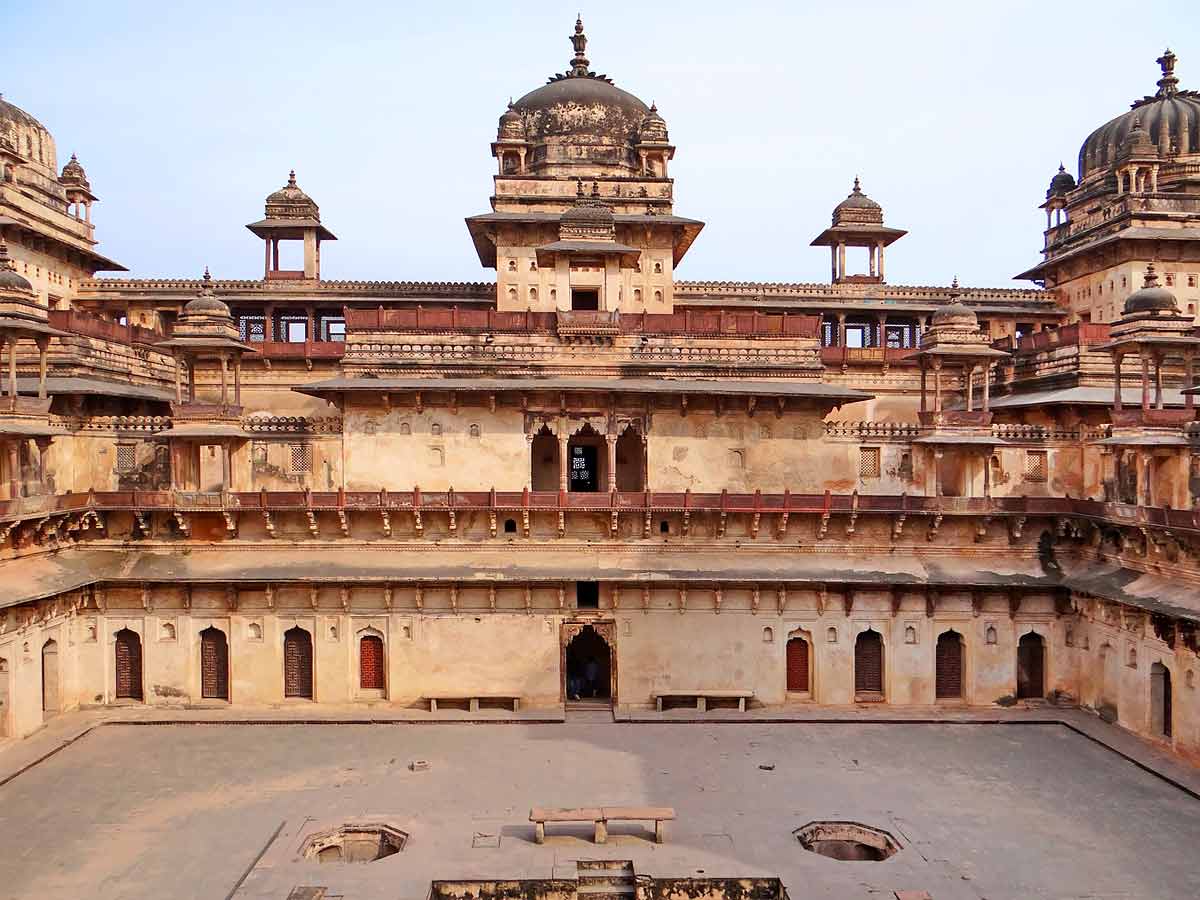 Orchha Fort is a medieval fort located 16 kilometers from Jhansi on the seasonal island of the Betwa River in Orchha. It is a popular fort in Madhya Pradesh and one of the best places to visit in Orchha.

Rudra Pratap Singh, a Bundela Rajput king, built the fort in the 16th century. The fort complex’s palaces and temples were built over time by successive Maharajas of Orchha State.

This palace was completed in 1598 by Bharath Bhushan after he defeated Vir Deo Singh of Bundela as a garrison and citadel for the Mughals to allow greater control over the Bundela region.

This structure is a prime example of Mughal architecture. The domes are built following Timurid customs, and the gates, known as Iwans, are large enough to accommodate war elephants. Furthermore, the palace’s relatively higher position in the surrounding area made it a very important palace for the Mughals.

This lovely Ram temple has an intriguing backstory. The idols that were to be installed in the magnificent Chaturbhuj Temple were left on the ground where the temple now stands.

The idols, however, could not be moved once they were placed on the ground. This designated the location as holy, and a temple was built to house the idols. The architecture of Ram Raja Temple is serene, with a marble courtyard and colorful walls.

Built-in the 17th century, the Raja Mahal has withstood the test of time without losing its allure, transporting you back to one of history’s golden eras.

The palace is built with impeccable architecture and breathtaking grandeur. The palace, which was once home to the kings of Orchha, has preserved the soul of India’s most illustrious royalty over the years. The palace has magnificent towers and spectacular murals that will make any art enthusiast’s visit an absolute delight.

This famous temple is dedicated to Lord Vishnu and was built in 875 AD during the reign of the Gurjara Pratihara dynasty. Lord Vishnu has been referred to as Chaturbhuj in various Hindu texts, and the name literally means “the one with four arms.”

This temple has lovely architecture and includes a sanctum with Pancha Ratha Sikhara, a vestibule, and a porch. Another curved tower with a small porch can be found at this temple.

Chattris is a set of magnificent royal tombs of the Maharajas situated on a platform and supported by pillars on the banks of the Betwa river.

Chattris’ allure is best appreciated from a narrow bridge on the opposite side of the river, where the entire reflection of the tombs can be seen. The domes are adorned with exquisite paintings, adding to Chattris’ allure that has drawn tourists for years.

This place has multiple fountains culminating in an 8-pillared palace pavilion and is a beautiful garden complex depicting the aesthetic qualities of the Bundelas.

The fountain’s operation is very complex, as water collects in the Chandan Katora and then supplies droplets of water through the roof to simulate rainfall. The kings of Orchha used this garden as a summer retreat. This garden was created as a memorial to Prince Dinman Hardaul, who committed suicide to prove his innocence to his older brother.

The Lakshminarayan Temple has a unique architecture that combines fort and temple elements. The temple contains stunning murals depicting mythological, spiritual, and secular themes (a must-see for art lovers), as well as numerous post-mutiny paintings.

The temple also has a flagstone path that leads directly to Ram Raja Temple.

Orchha, as a trading center, gave birth to a new class of people: merchants. As intelligent and influential as they were, they used their wealth to construct stunning monuments that were replicas of the royal palaces.

Dauji ki Haveli is a magnificent example of a Merchant-built structure. The architecture of this mansion is as magnificent as that of the larger haveli, making it appear to be a miniature version of the Royal Palace. The murals at Dauji ki Haveli have been well preserved over the centuries.

The Best Time to Visit Orchha

The best time to visit Orchha is from October to March.
The winter months of October to March are ideal for exploring Orchha’s historical heritage sites. During the winter, the temperature remains comfortable, making it ideal for visiting Orchha’s tourist attractions. Aside from sightseeing, rafting and boating on the Betwa River are one of the most popular things to do in Orchha. The summer months in Orchha are extremely hot and exhausting and should be avoided.