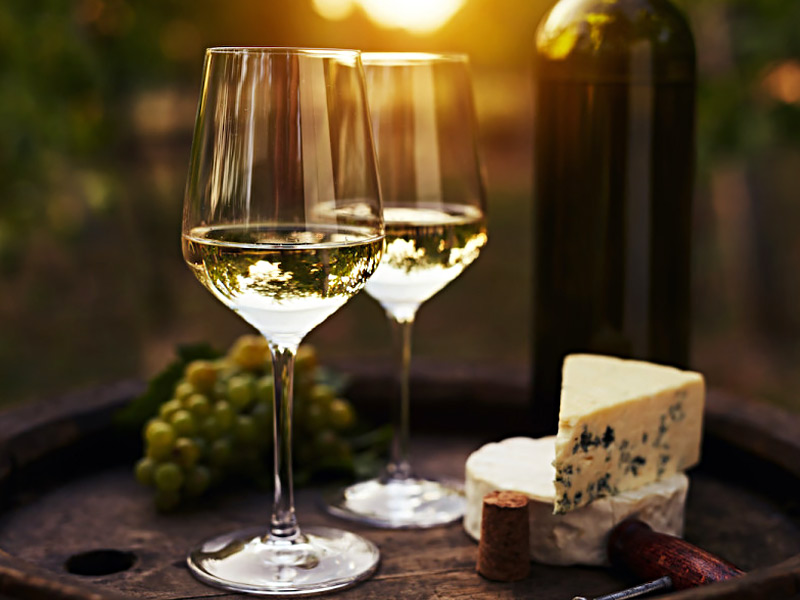 These advantages are due to the naturally occurring key ingredients in red wine, which include heart-healthy antioxidants, cholesterol-lowering polyphenol resveratrol, and anti-cancer polyphenol ellagic acid. What about white wine, though?

Nothing beats a glass of crisp pinot grigio with a light pasta dish or a buttery chardonnay with a shellfish feast. A refreshing white wine goes down as easily as water—which, let’s be honest, can be a little dangerous on a romantic patio date, a backyard summer BBQ with friends, or alone on the sofa after a long workday. It’s time to consider what happens to your body when you consume white wine. What kinds of effects can a single glass produce? Or how about three?

“White wine can certainly be a part of a healthy diet, especially when consumed in moderation,” says Sandy Younan Brikho, RD of The Dish on Nutrition. She also mentions that the American Heart Association recommends no more than one glass of wine per day for women and two glasses per day for men.

Although not as thoroughly researched as its red counterpart, white wine does have some health benefits. Indeed, some studies have shown that white wine has a distinct set of health-promoting chemicals and antioxidants that distinguishes it from red wine.

So, whether you’re allergic to red wine, don’t like the taste, want something light and refreshing for the summer, or simply prefer white wine, here are five health benefits of white wine that may inspire you to pour a glass:

Heart and metabolism health White wine consumption has been shown by researchers to improve cardiovascular and metabolic function. In one study, 224 patients with well-controlled type 2 diabetes were randomly assigned to drink either red wine, white wine, or mineral water with their dinners for two years to determine the effect of moderate wine consumption.

The health of the lungs. White wine may have an advantage over red wine in this area of health. While both white and red wine can improve lung function, white wine appears to be more effective.

Researchers from the University of Buffalo assessed 1,555 participants for lifetime alcohol consumption, lifestyle habits, body measurements, and lung function in one study. Wine drinkers had the highest concentration of protective antioxidants in their blood, according to the findings.

Furthermore, in an analysis of all alcohol intake variables and lung function, recent and lifetime wine consumption had the strongest associations with forced vital capacity and volume forcibly expelled in one second. Surprisingly, white wine had a stronger association.

“Red wine in moderation has been shown to be beneficial to the heart, but the relationship was stronger in this case for white wine.”

We also discovered that antioxidant levels in both the diet and the blood serum are related to lung health and function. “We believe that the antioxidants in wine are responsible for our current findings,” study author Holger Schünemann, MD, PhD, said.

Renal wellness. According to researchers, one particular compound, caffeic acid, may be responsible for white wine’s health benefits. In a study published in PLOS ONE, for example, Italian researchers isolated and investigated caffeic acid for its purported antioxidant properties.

Mental health. According to some studies, the unique antioxidants found in white wine may offer protection against cognitive decline. In one study published in the Journal of Nutritional Biochemistry, researchers extracted polyphenols from the white wine and fed them to mice for two months to see how a white wine-enriched diet affected the brain for Alzheimer’s disease-like pathology. These mice had a lower risk of developing cognitive problems that led to Alzheimer’s disease at the end of the trial.

Glycemic control. White wine, like red wine, may help lower cholesterol levels. In one study of 146 people at low to moderate risk of cardiovascular disease who were followed for a year, those who exercised at least twice a week and drank white or red wine saw significant improvements in their LDL cholesterol levels.