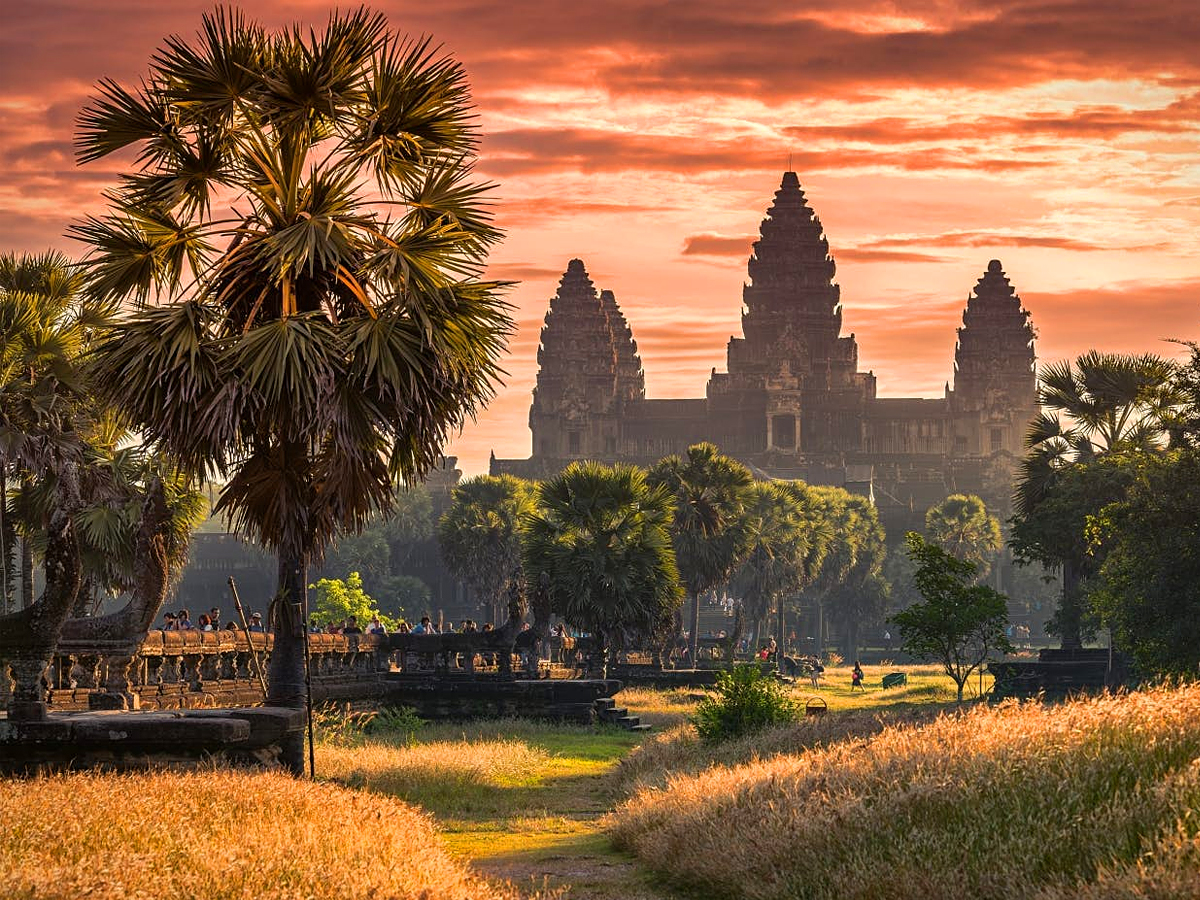 While Southeast Asia is famous among travelers for the beautiful beaches of Thailand or natural sites and historic structures in Vietnam. But where do you head after you have had enough of these places? What do you seek when you are bored of beaches? An appropriate answer to all these questions in Cambodia. Bordered by Thailand to the northwest, Laos to the northeast, and the Gulf of Thailand to the southwest, Cambodia is a beautiful country with a rich history and beautiful landscapes that keep the travelers engaged.

The major religion in Cambodia is Buddhism and thus, you can see many Buddhist temples that are a perfect display of ancient engineering. The ancient culture and modern lifestyle can co-exist beautifully and Cambodia is one of the biggest proof of it. The diverse landscapes and beautiful architecture in the country provide travelers with a variety of unique experiences. From beautiful villages to busy cities, there’s a lot to explore in Cambodia. While it is almost impossible to cover the entire country, 6 such places hold almost all the values and features of the country.

6. Koh Rong:  Koh Rong is among Cambodia’s top tourist destinations due to its beautiful beaches. Koh Toch is one of the most popular beaches in the island paradise Koh Rong. It allows you to spend a night at the traditional huts located next to the beach. This region has a rich marine life and you can spot diamond fish, seahorses, sergeant fish, and parrotfish while doing snorkeling. This is the perfect spot in Cambodia for enjoying water sports like diving and kayaking. Another key attraction here is the famous rope adventure park where you can go zip lining. Lonely beach and Coconut beach are some other places of attraction here. 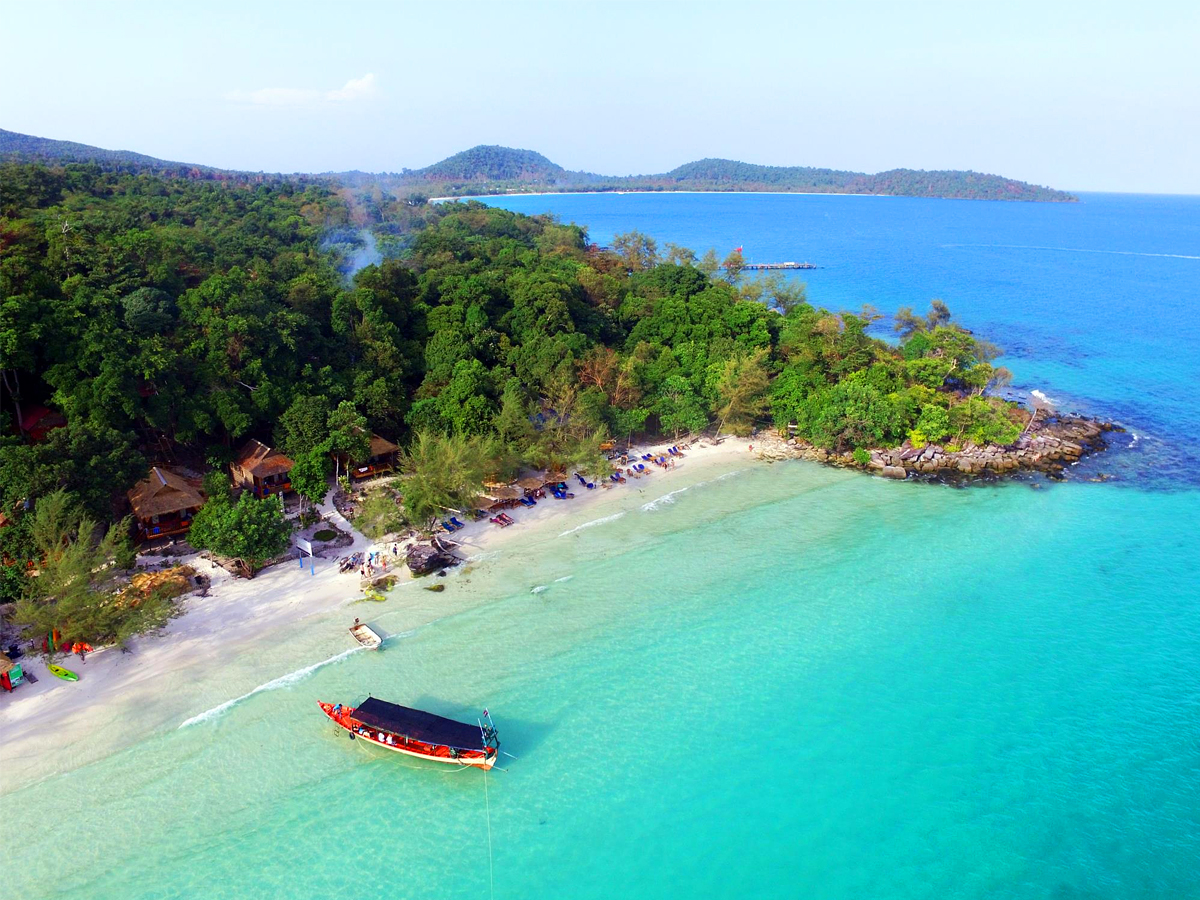 5. Battambang: The second most populous city in Cambodia, Battambang is one of the best places to visit if you want to witness the city life in the country and want to learn more about its history. It was once a part of the French Indochina and the colonial structures in the city make the countryside look exotic. The best way to explore Battambang is on the TukTuk. The cafes in the city that serve delicious food make it one of the most tourist-friendly cities in the country. A bike ride along the paddy fields located along the lakes and streams will enhance your experience. 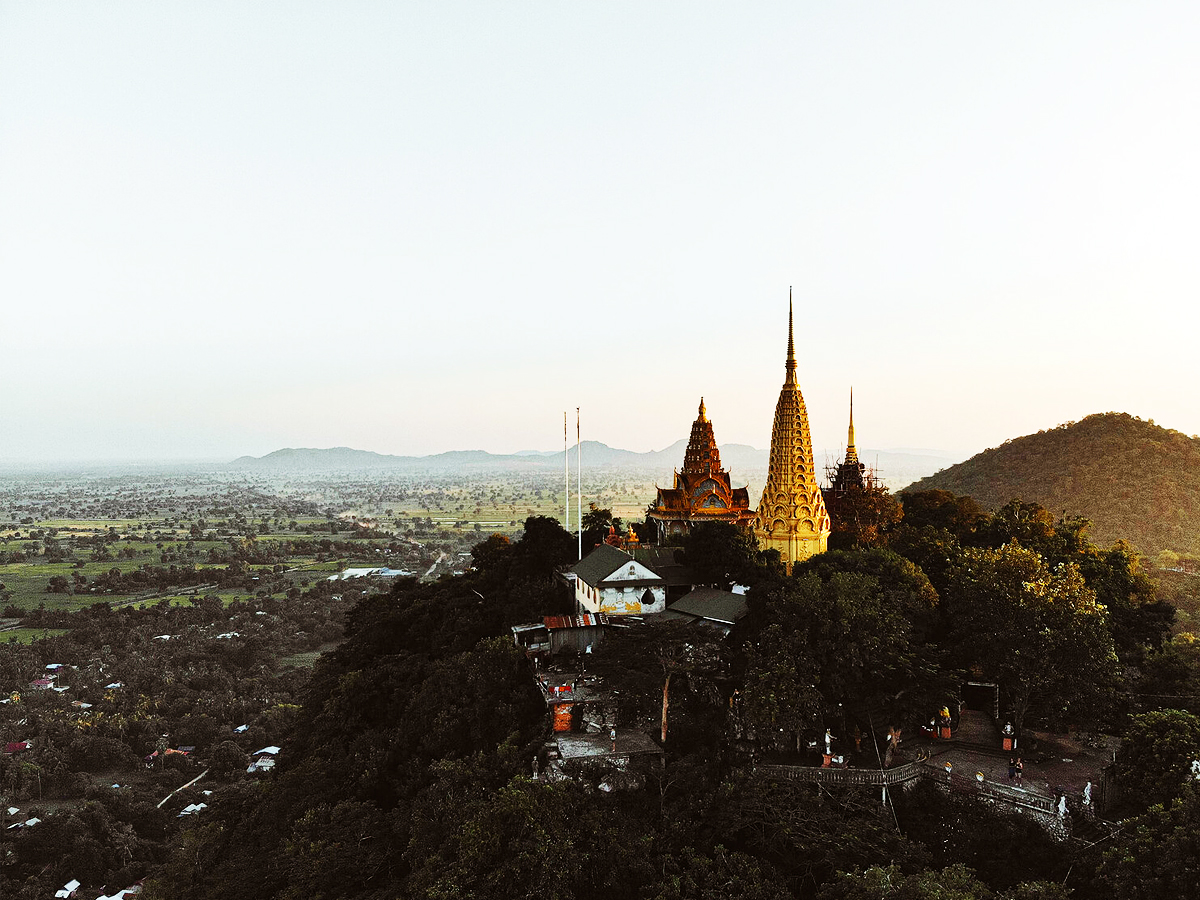 4. Siem Reap: It is the fastest growing city in Cambodia. The resort town located in northwestern Cambodia depends mainly on tourism for revenue and the tourism industry has transformed the appearance as well as the fate of the Siem Reap. The town is particularly important for tourists as it serves as a gateway town to the famous Angkor Temples. Apart from temples, travelers prefer staying in the town due to its budget-friendly hotels and hostels and quirky cafes that serve delicious local and continental food. From 5-star hotels to pocket-friendly hostels for backpackers, Siem Reap never disappoints anyone.

3. Koh Ker: Everyone knows that temples are the primary reason why people from across the world visit Cambodia. The country holds a significant value for Hindus, Buddhists, and History buffs. Koh Ker is the second most important temple in Cambodia. Located at a distance of 120 km northeast of Siem Reap, it was the capital of the Khmer Empire between 928 and 944 AD. It was then that many famous temples including this one were made. The key attraction in the Koh Ker temple area that mostly comprises ruins, is Prasat Thom, a 30 meter (98 ft) tall temple pyramid rising high above the surrounding jungle. You can spend hours at this calm place and click beautiful pictures of the ancient engineering marvel. 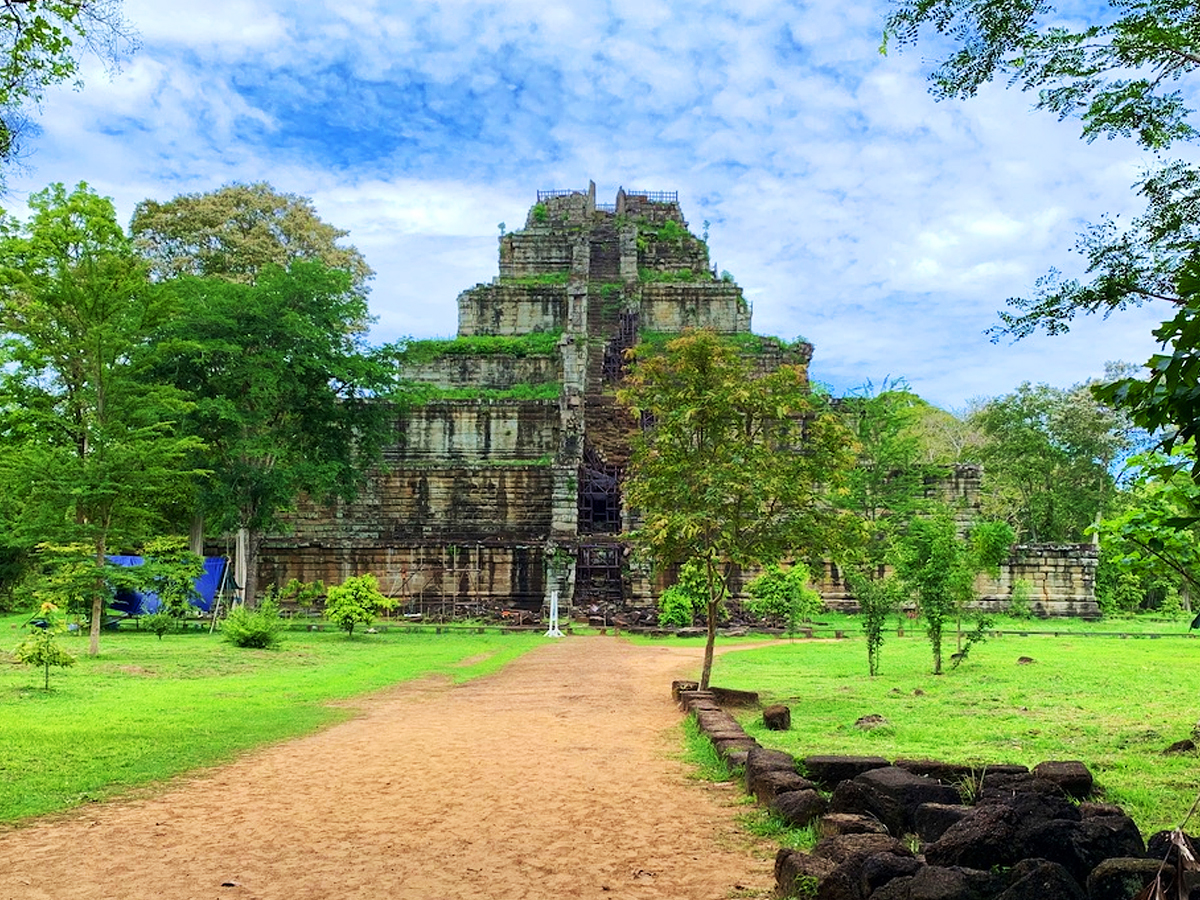 2. Phnom Penh: Phnom Penh is the capital city of Cambodia and is also the largest city in the country. It was also known as “the pearl of Asia” and has been the capital of the country since the French colonial days. While the city is developing swiftly, you can spot the after-effects of war and revolution that the city is still recovering from. You will find several Buddhist temples and colonial structures here. Among the key places of attraction in Phnom Penh, the Royal Palace and the Silver Pagoda are the most significant ones. The Silver Pagoda has a life-size golden statue of Buddha that is covered with diamonds. The nightlife in Phnom Penh is equally happening and lively hence, you will not miss the city vibes here. The Royal family of Cambodia resides here in the Royal Palace. 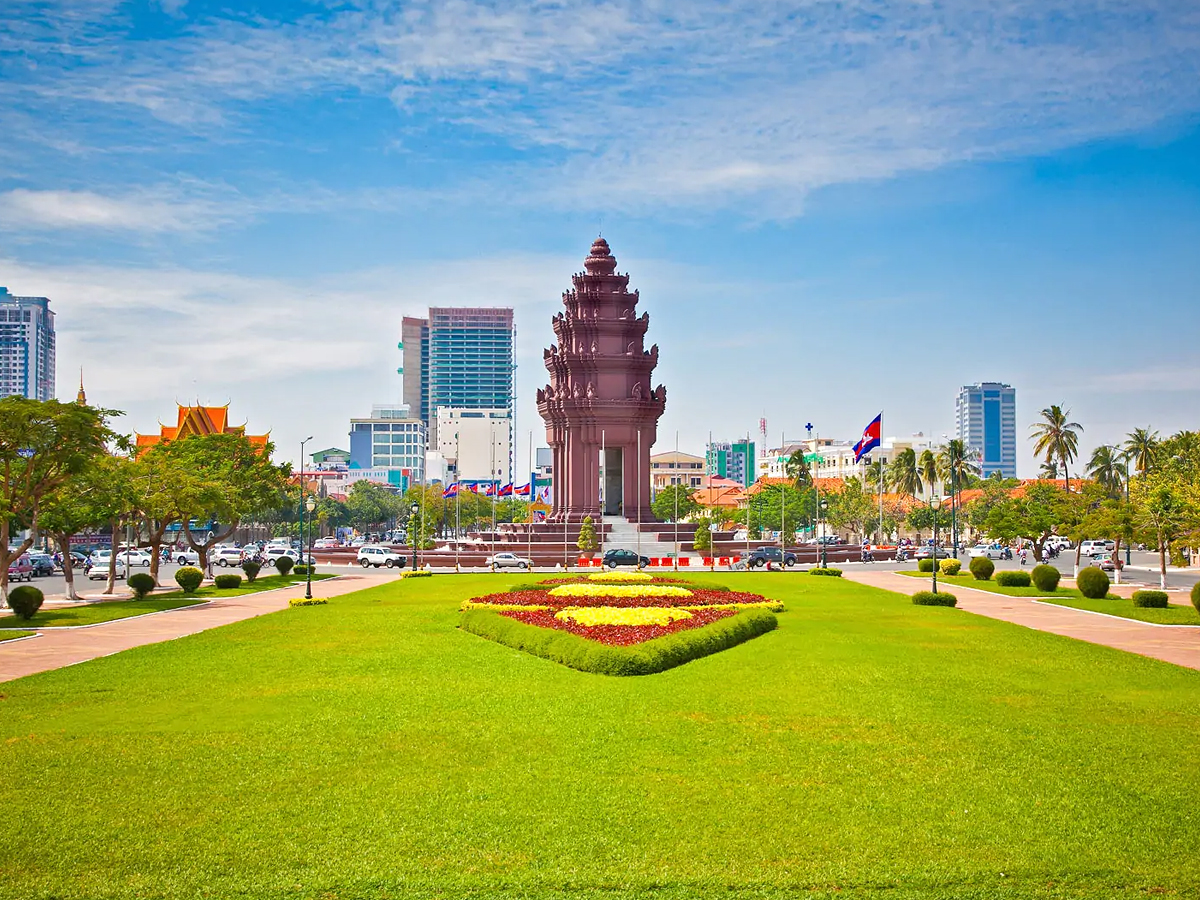 1. Angkor Wat: It is one of the key reasons that most of the world knows about the existence of Cambodia on the world map. A Buddhist temple complex spread over an area of nearly 163 hectares, it was built in the early 12th century as a Hindu temple. It is said to be the largest temple in the world and holds a significant value for both Buddhists and well as Hindus. Not only Cambodia, but Angkor Wat is also the most significant archaeological site in Southeast Asia. It is a group of thousands of temples located amidst dense forests and rice fields. This is the reason, this place is a heaven for photography lovers. While many temples here have been restored, it is nearly impossible to restore all of them as the complex homes of thousands of temples. Angkor, which was the capital of the Khmer empire from the 9th to 14th century, underwent many religious conversions between Hinduism and Buddhism. This is why the complex has both Hindu as well as Buddhist temples. 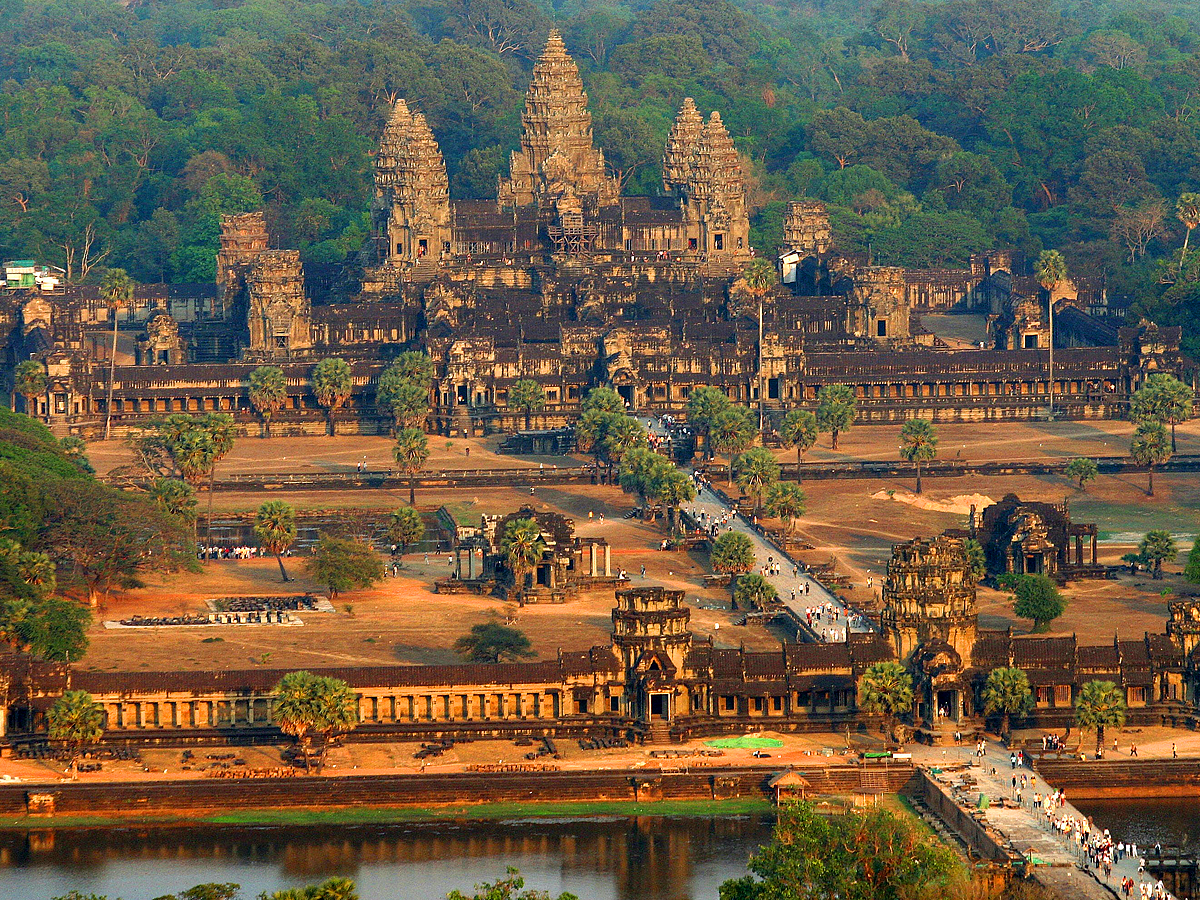