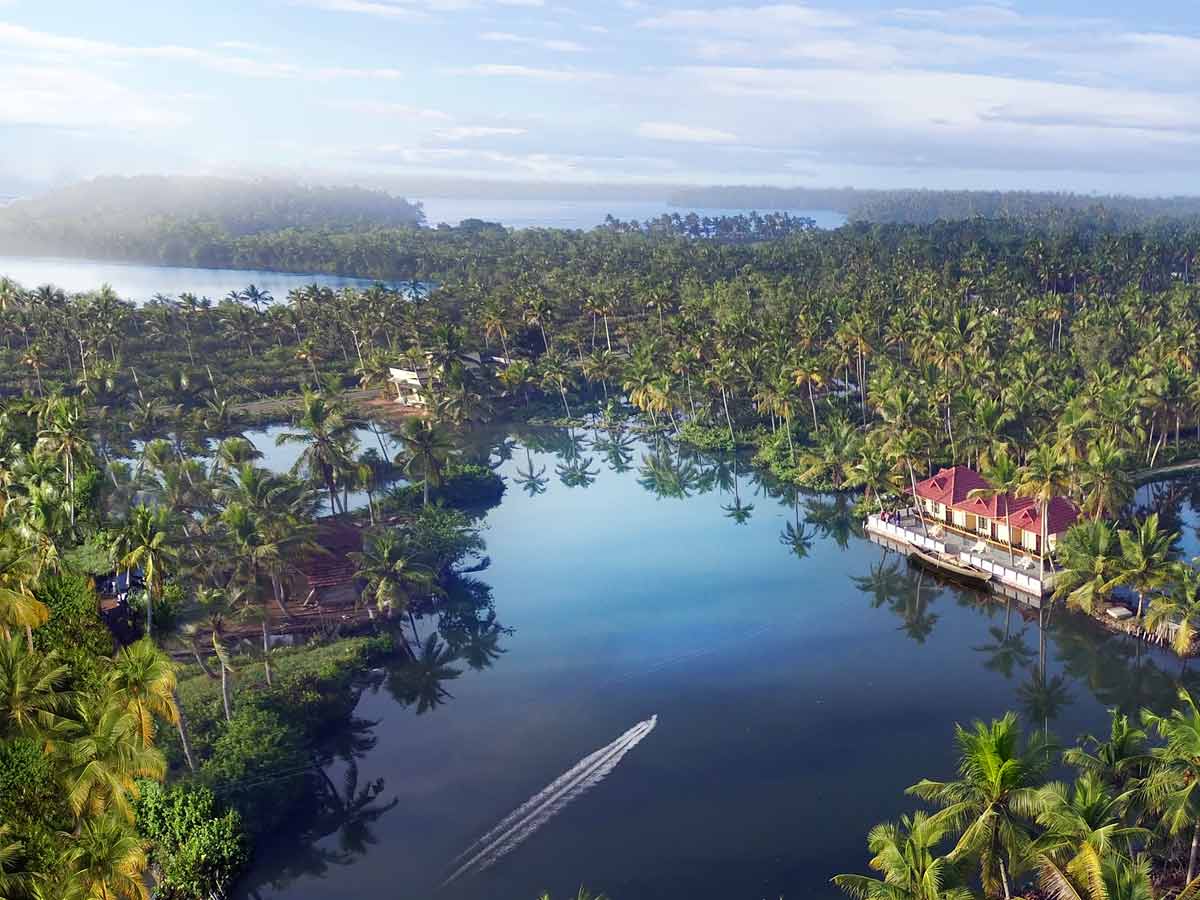 Munroe Islands is an inland island situated at the confluence of the Kallada River and Ashtamudi Lake. Located in Kerala’s Kollam district, the island comprises eight small islets and covers an area of nearly 13.4 km sq. One can reach the island by road train or inland water navigation. Located 25 kilometers from Kollam, Munroe Island is a very popular tourist attraction in Kerala. It is also known as Mundrothuruth in local language. The island gets its local name from the administrative village of the same name. The name ‘Munro Island’ was given to it in honour of Resident John Munro of Travancore.

One can learn a lot of things about how businesses flourish in the region while exploring the island. You can witness processes like fishing, coir weaving, prawns feeding, coir retting process, narrow canals and waterways. With its rich flora and fauna, Munroe Island is a very special place for nature lovers. One of the most famous boat races- Kallada Boat Race, is held at Kathrikadavu- Muthiraparambu nettayam in Munroe Island. Munroe Island has nearly 10,000 residents and the population here is declining steadily.

With its mesmerising backwaters, Munroe Island is also a great spot for Canal cruise. There’s a lot to explore on the island.

The picturesque island is mainly popular for activities like cruise canal boating and boat racing. It is one of the less travelled to backwaters destinations in Kerala and if you want to beat the crowd during the peak seasons, Munroe Island could be a perfect alternative.

When at Munroe Islands, you simply can’t miss the opportunity to enjoy a cruise. There’s a different charm in exploring the backwaters and looking at the creation of mother nature while sailing through narrow waterways. You will be greeted by colourful flowers and dense green fields while enjoying the cruise.

Munroe Islands is one of the cheapest places in India to enjoy a cruise. You can book your slot for as low as Rs. 500. There are fixed time slots for cruises on the island. The morning cruise starts at 9 am onwards whereas the afternoon one starts after 2 pm.

Boat Race is known as Vallam Kali in the local language. The boat race takes place on Kallada river and hence, is popularly called the Kallada Boat Race. People from different parts of the country visit the island to get a glimpse of the much talked about boat race, which is a rare occurrence in any other part of the world. The boat race event in Munroe Islands is like any other grand festival and is celebrated with great enthusiasm by the local community, that is predominantly Malayali. The grand boat race starts after a magnificent sail past followed by a mass drill. You must have your camera ready to record every bit of the event.

While the boat race is the main event, there are several side events that make the whole arrangement look like a grand festival. The attire of the locals is another thing that will leave you amazed. Kallada Boat Race is one of the many fragments of the diverse Indian culture. A country boat sightseeing across Munroe Island is also conducted by the Tourist Promotion Council of Kollam. There are a lot of other activities to take part in besides the grand boat race that is organised 28 days after Onam.

Another great experience that you can’t afford to miss while exploring the island is the Canoe Tour. It is the best way to explore the backwaters in the state. You can book your Canoe tour either with DTPC or by private operators.

The best time to visit Munroe Islands is between October and May. Avoid visiting the islands during the monsoon as floods are a very common occurrence in Kerala.