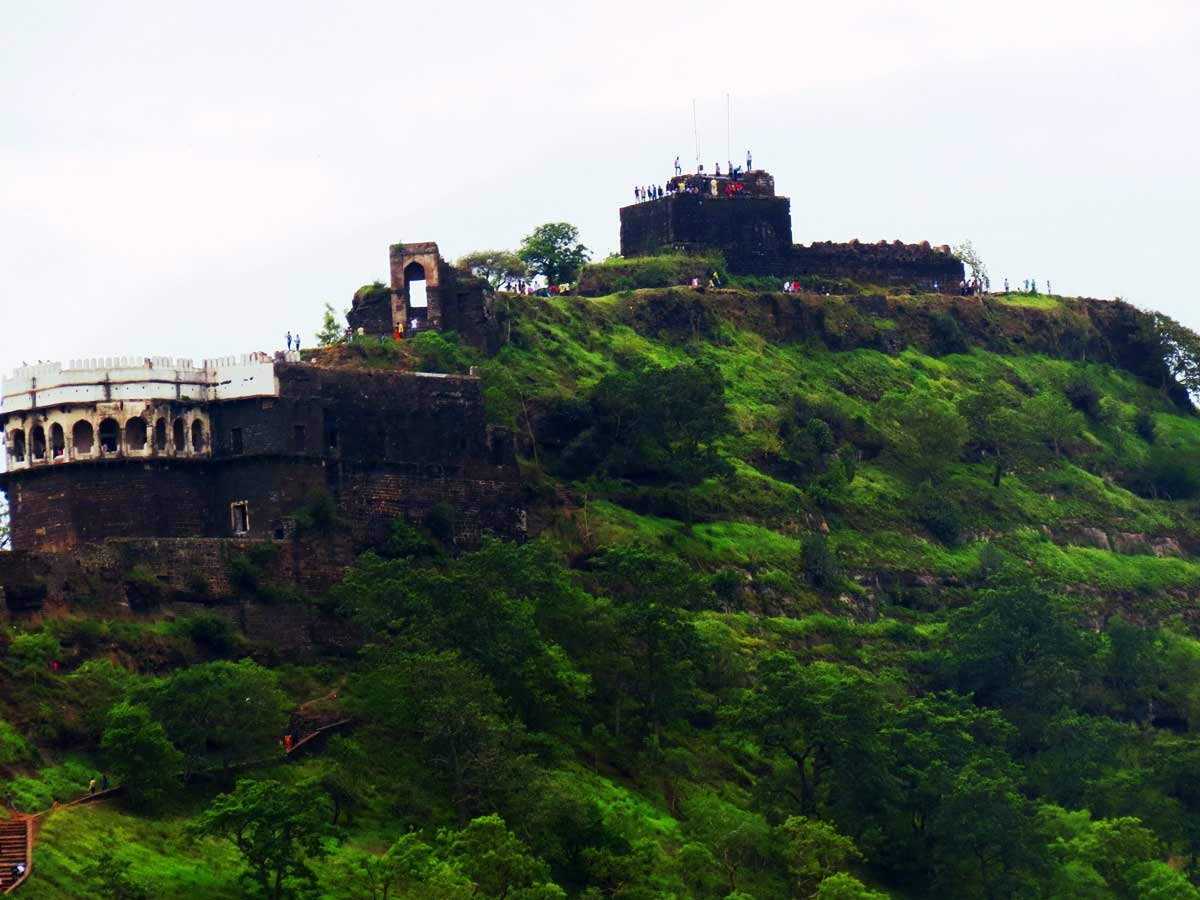 Daulatabad Fort is a historic citadel that rises imposingly from the middle of lush countryside, 15 miles from Aurangabad‘s main city. This architectural wonder, which is frequently praised as one of the “seven marvels of Maharashtra,” is said to have been constructed around the 12th century.

Perhaps the most alluring feature of this fort, also known as Devgiri, is its setting, from which you can get a spellbinding view of the entire city. Although it takes about 750 steps to reach the top, the view of the ground below is really breathtaking.

The Daulatabad Fort’s design, which makes it one of the most potent castles of the medieval era, is among its most inspiring features. It is situated on a 200-meter-tall conical hill, giving this massive castle a commanding vantage point, stunning architectural features, and defense from the enemy.

The engineering brilliance of the massive Devgiri Fort is another distinctive feature. It not only provided an invincible defense against enemy forces but also effectively controlled valuable water resources. The antique structure stands out beautifully against Aurangabad’s verdant fields, creating a scene that transports you back in time.

The Daulatabad Fort is one of the best-preserved forts in the nation because of its strategically sound and robust design. It is perched atop a conical hill, and to keep intruders out, a moat surrounding the bottom portion of the structure is filled with crocodiles. Multiple bastions surround and protect the entire fort.

It was further fortified by several cannons during the Tughlaq dynasty, and a sturdy 5 km-long wall was constructed to guard the enormous structure. To strategically stop strangers from entering the magnificent fort, several mazes and puzzles have been constructed there. During Tughlaq’s tenure, a 30-meter Chand Minar was also constructed inside the fort.

The Devgiri Fort was built in an unusual way that was intentional so that any adversary marching in its direction would be diverted. There was only one door in the fort, and it was used for both entry and egress. This was done to prevent any enemy troops from entering the fort in search of an exit and being stuck there.

Elephants that had consumed alcohol were once used to open the forts’ gates. The Daulatabad Fort has a particular feature of spikes on the gates that delivered the enormous beast an instant death to prevent such a situation.

To mislead the enemy, Dauatabad did not have parallel gates, and the fort’s flag mast was located on the left-hand side. The enemy attempted to attack the same, but when they turned left, the exit gates were on the right, trapping them further inside the maze-like fort.

The opposition was made to feel uneasy by serpentine entryway patterns, false doorways, oddly shaped walls, and other ruses, which ultimately led to their defeat. Even the hill’s rounded, the smooth shape was employed to defend the Daulatabad Fort from would-be mountain lizard climbers who would utterly fail to ascend the peak. These resource placements, along with numerous more, deceived the adversaries.

Getting to the top of this massive structure, which can only be reached on foot, is one of the most difficult aspects of visiting the Daulatabad Fort. Depending on your speed, climbing 750 stairs could need anywhere from one to three hours.

The route is easy to moderately difficult, however, you should carry a torch because there are a few dark spots. You will also get to experience the quirks of Daulatabad Fort, which are extremely intriguing to note and observe as you move around. For example, no two entrances are in front of one another.

Daulatabad was formerly referred to as “Devgiri,” which is Sanskrit for “the hill of gods.” Raja Bhillamraj Yadav, a member of the Yadava dynasty, built the entire township in 1187.

The fort, which has endured for years without change, is regarded as one of the best-preserved forts in the nation. The Tughlaq dynasty of Delhi, led by Mohammad Bin Tughlaq, conquered the rich Yadava dynasty and seized control of the town of Devgiri as well as the two forts.

The shortage of water in the region led the kings of Delhi to flee the city. The Tughlaq dynasty moved its capital back to Delhi in less than two years, leaving Daulatabad in an abandoned state.

The distance between Aurangabad and Daulatabad Fort is 27 kilometers, approximately a 30-minute trip. Buses routinely travel from Aurangabad to Daulatabad Fort, or you can hire a private vehicle from a tour company.