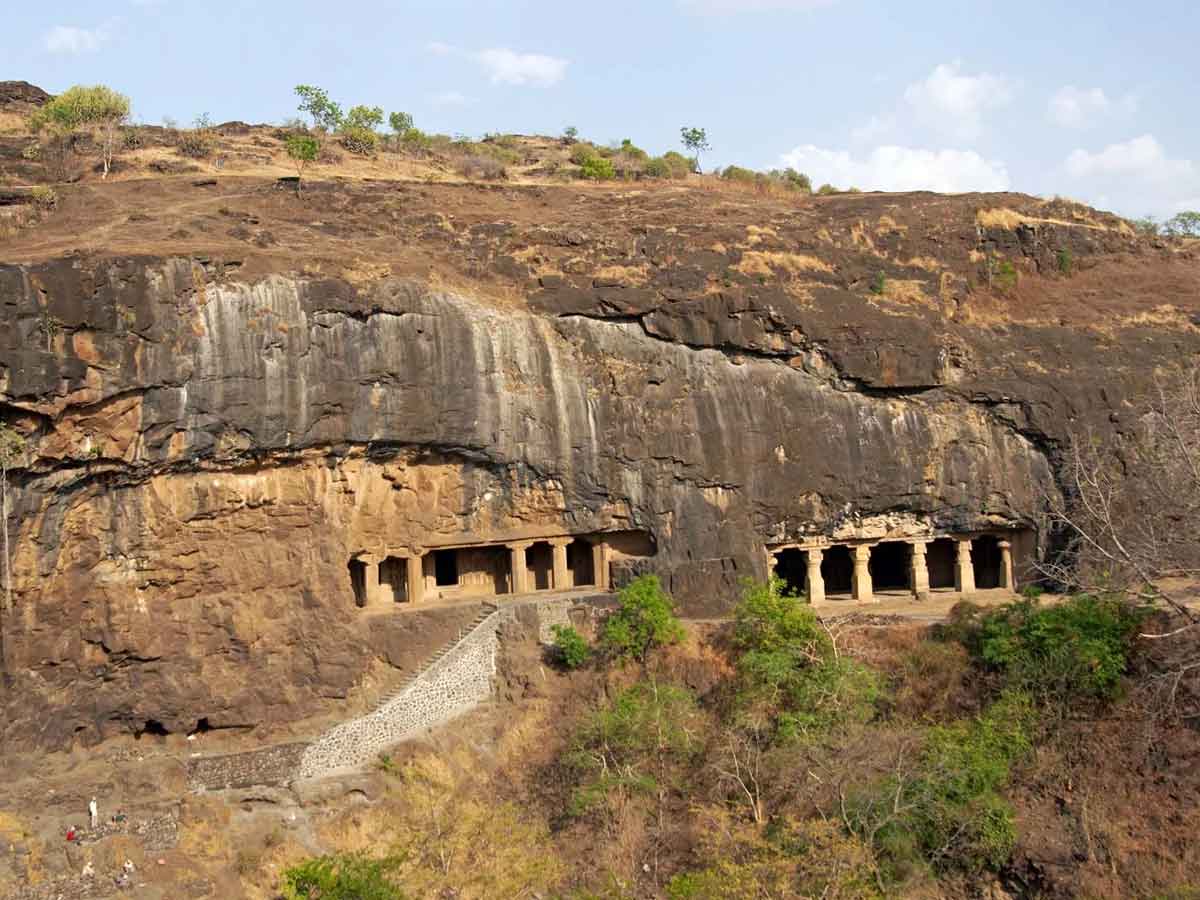 Ellora often spelled Elura and Elapura in the past, is a holy place in Maharastra, central India. The Hindu, Buddhist, and Jain temples and monuments in the Ellora Caves, which are recognized by UNESCO as a World Heritage Site, were carved out of the area’s cliff rock between the sixth and eighth centuries CE. The Kailasa temple, built in the eighth century CE and standing 32 meters tall, is the most impressive example.

Ellora is the most significant second-wave site of historic rock-cut architecture in India, and it is situated in the Sahyadri highlands close to Aurangabad.

35 caverns and rock-cut temples may be found in the western face of one hill made of basalt rock, which was formed primarily during the Kalachuri dynasty‘s rule in the sixth and seventh centuries CE.

The Hindu Ramesvara (no. 21) is the oldest cave and was formed in the sixth century CE. An inner sanctum (garbhagriha), a circumambulatory corridor for worshipers to go around, vestibules with double porticoes, and elaborate decorating via high-relief friezes and carvings depicting scenes from the Puranas sacred books are all characteristics of early Hindu temples.

The façade of Cave 21 features carvings of river goddesses, the entrance features a Nandi sculpture, and the interior features both Durga destroying the buffalo demon king and a huge dancing Shiva accompanied by musicians. Other noteworthy features are reliefs of elephants and mithuna (lover) figures as well as the use of pair figures as brackets (salabhanjikas).

The Kailasa temple (structure no. 16) is the largest rock-cut edifice in the world and one of the most magnificent structures in existence. Built by Krsna I of the Rashtrakuta dynasty (r. 756-773 CE) to commemorate his triumph over the Pallavas, it added to the splendor of Ellora, which Dantidurga, Krsna’s predecessor, had made the capital after his victory over the rival Chalukyas in around 753 CE. The Kailasa, which resembles the Kailasanatha in Kanchipuram, is the most northern example of the southern Dravida temple style. A pancayatana, or five-shrine temple, is what it is.

The temple was devoted to Shiva and may have attempted to imitate his palace on earth, as suggested by its name (the name of Shiva’s mythological residence in the Himalayas). The carved depiction of Ravana being imprisoned beneath Shiva’s mountain that was placed beneath the temple itself is evidence that this was the architect’s goal. The entire temple is built on a high platform that worshippers must ascend using two grand staircases, giving it a further mountain impression.

The Buddhist caverns were carved later than the Hindu ones, most likely during the 7th and 8th century CE, and are among the largest ever discovered. Their floor plans are more intricate, and the colonnades’ capitals either have vases and foliage or cushions with chamfers. The size and depth of Cave 5 are very impressive. It comprises 17 cells as well as a sizable rectangular hall with two rows of 10 columns separated by rows of placed stone benches. Beyond the assumption that monks congregated there for gatherings of some type, the purpose of these is still unknown.

These caves’ interiors are decorated with statues of the Buddha in all of his forms and numerous Bodhisattvas, some of which are among the earliest examples, like Tara. There are Bodhisattva figures on either side of several of the inner sanctums. The carving in Cave 8 is the earliest example of a four-armed figure reflecting Hindu influence that has been found so far.

A Hindu cave known as Ravana Ka Khai or the Abode of Ravana is located next to Cave 12 at Ellora, 350 meters from Kailasa Temple and 400 meters from the Ellora Caves Bus Stop.

There are a total of 17 Hindu caves, numbered 13 through 29, that was dug out of the hill’s west face and have been dated to between 650 and 900 AD. The principal examples of this category are Caves 14, 15, 16, 21, and 29. These caves are located in the middle of the cave complex, clustered on either side of Ellora’s renowned Kailasa Temple. The early Brahmanical excavations immediately follow the Buddhist caves, hence they are extremely similar to the

Cave 10, also known as Viswakarma Cave, is located next to Cave 9 and is the most well-known of all the Buddhist Caves at Ellora. It is located 600 meters from the Ellora Caves Bus Stop and 500 meters from Kailasa Temple.

Locally, the Viswakarma Cave is also known as the Carpenter’s Hut (Sutar-ka-jhopra). The neighborhood’s carpenters frequently go to the cave and revere Buddha as Viswakarma, the protector of their trade. In this group of caves, which were built about the seventh century AD, is the lone chaitya.

Another Hindu cave in Ellora is Cave 29, which is 850 meters from Kailasa Temple and 900 meters from the Ellora Caves Bus Stop. It is located to the north of Kailasa Temple. At Ellora, this is the first and final phase of Hindu excavations.

Another significant excavation at Ellora near Sita-Ki-Nahani, a pool made by a waterfall in the Elaganga River, is Cave 29, also known as Dumar Lena. The Elephanta Caves in Mumbai are claimed to have impacted the design of Cave 29, which dates to the late sixth century AD.

Aurangabad sometimes referred to as the “City of Gates,” is one of the most well-known historical destinations around Pune. Malik Ambar, the prime minister of Murtaza Nizam Shah of Ahmadnagar, created the city in 1610 AD, and his son Fateh Khan changed the name of Khadki to Fatehnagar. The Delhi Sultanates, Bahamani Sultans, Nizam Shahis, Mughals, and Hyderabad Nizams all had authority over the regions near Aurangabad. The Nizam Shahi dominions, including Fatehnagar, came under the control of the Mughals in 1633 AD after the Mughals captured Daulatabad.