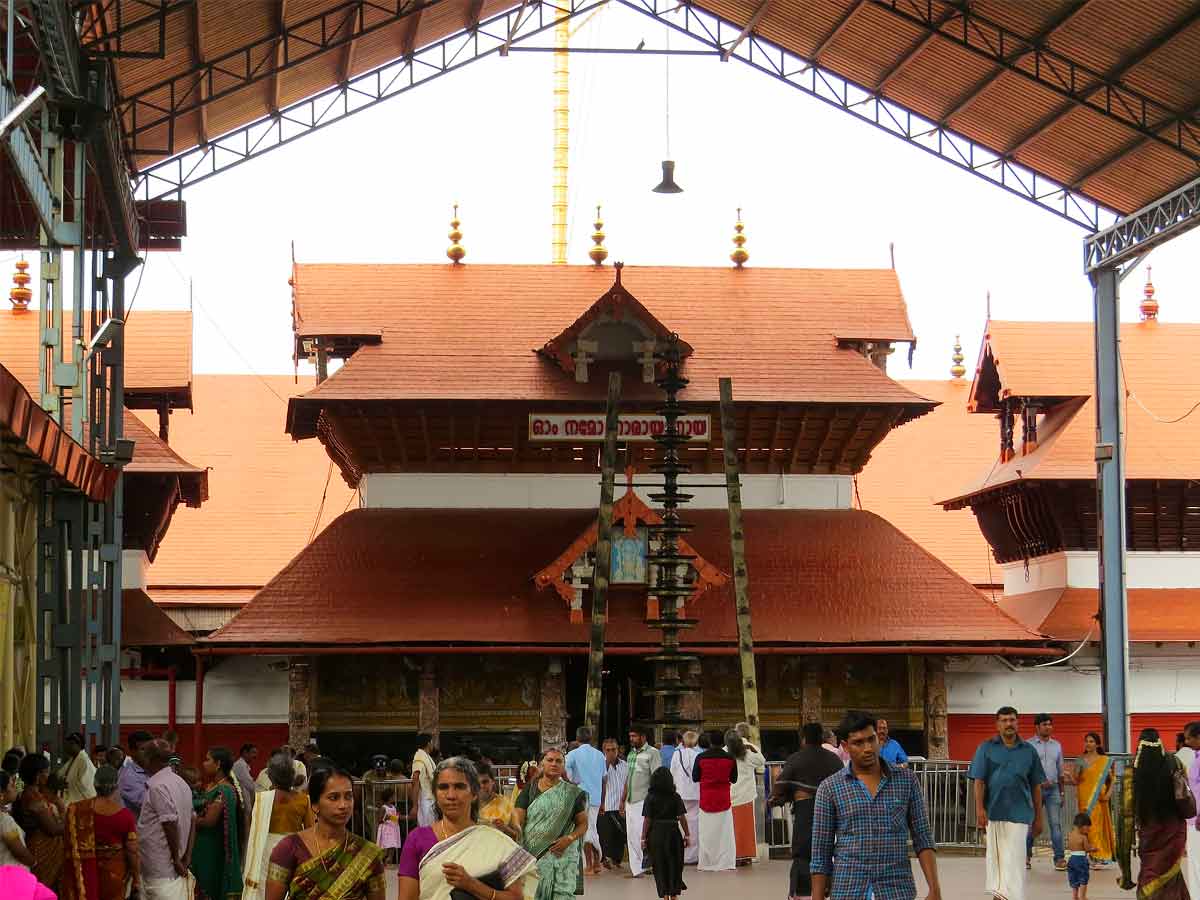 Guruvayur Temple is a significant and well-known pilgrimage site in Kerala. Guruvayur Temple is located in the Thrissur district of Guruvayur town and is easily accessible by frequent bus services throughout Kerala. The nearest airport is at Kochi, which is 90 kilometers away from Guruvayoor. The nearest railway station is in Thrissur, which is 29 kilometers away from the temple.

Guruvayur Temple is said to be 5,000 years old. It was known as “Bhooloka Vaikunta” during the time (Abode of God on Earth). The term ‘Guruvayur’ is claimed to be derived from two words: ‘Guru’ (god’s preceptor) and ‘Vayu’ (god of winds). Lord Krishna, also known as Guruvayoorappan, is the subject of the temple. Guruvayur Temple is also known as ‘Dakshina Dwaraka’ due to its respect (Southern Dwarka).

The Guruvayur temple is devoted to Lord Guruvayoorappan, a manifestation of the Hindu deity Vishnu. As a result, the temple is also known as Guruvayur Sri Krishna temple. Lord Vishnu’s Guruvayoor form has four arms. One holds the conch Panchajanya, another holds the discus Sudarshana Chakra, the third holds the mace Kaumodaki, and the final holding a lotus with a Holy basil garland.

Krishna’s Guruvayoorappan form is Lord Vishnu, as witnessed by Krishna’s parents Vasudeva and Devaki at the time of his birth. As a result, it’s no surprise that Guruvayoor has gained the moniker “Dwarka of South India.” Dwarka is an ancient north Indian city where Krishna is said to have been born. 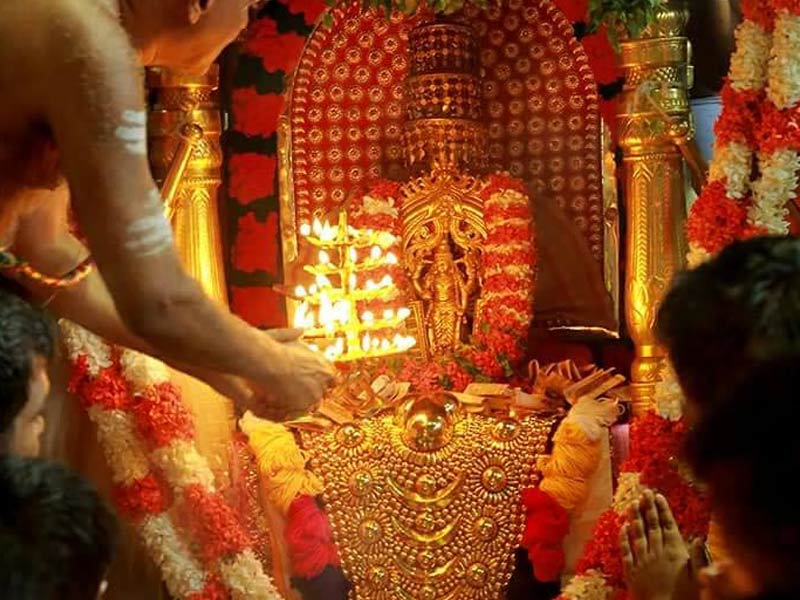 This temple has a main priest named Mesanti, accessible for prayers and rites around the clock. It is said that the priest enters the sanctum santorum early in the morning and fasts until the midday prayer procedures are completed.

Why is Guruvayur temple so well-known?

The Guruvayur Temple is a well-known Shri Krishna temple and one of the most prominent places of worship for Hindus. It is also known as “Bhooloka Vaikuntam,” which corresponds to the holy abode of Vishnu on Earth. 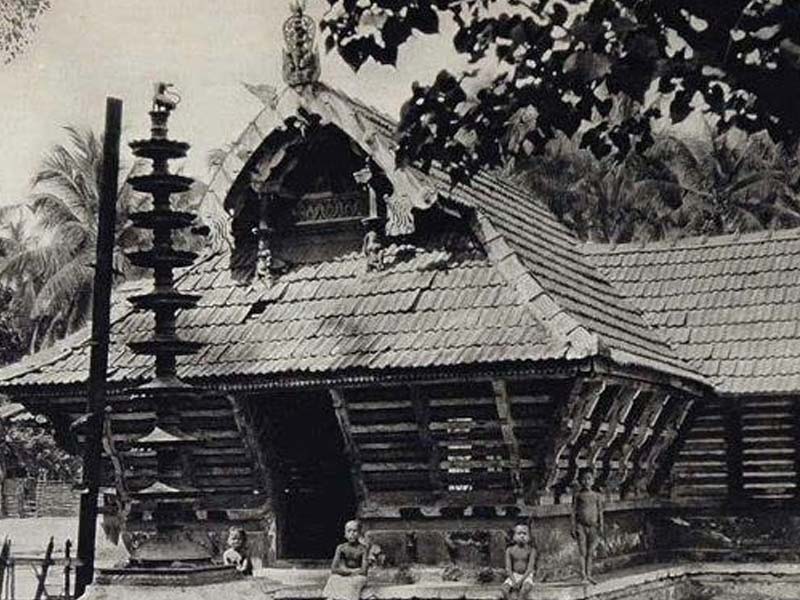 You should be familiar with the story of the shrine’s origins and essential information about Guruvayur’s history. According to folklore, the deity in Guruvayur is almost 5000 years old. The center shrine was constructed in 1638 A.D., according to legend. By then, it had become the most famous pilgrimage site in Kerala, owing mostly to the five devotees who spread the glory – Poonthanam, Melpattur, Vilvamangalam, Kururamma, and Prince Manadevan (Zamorin).

In the year 1716. The Dutch pillaged and burned down the temple. In 1747 AD, it was rebuilt in the year 1766 AD. Haider Ali conquered Calicut and Guruvayur but saved the temple in exchange for 10000 Ferams paid by Vatakkepat Variyar. The general sense of unease prevailed; the flow of pilgrims and the annual payment of tenants both ceased. On the advice of the Governor of Malabar, Srinivasa Rao, Haider Ali gave the temple a ‘Devadaya’ (free gift) in 1780 AD, saving the temple from extinction.

Tipu Sultan, Haider Ali’s son, and successor arrived in 1789 to fight the Zamorin and convert Hindus to Islam. Fearing for the image’s destruction, the Mulavigraha (Main deity) was concealed below. The Utsavavigraha (processional god) was transported to Ambalapuzha. Tipu set fire to the shrine and robbed it. A timely shower and a celestial voice, however, avoided a massive disaster. Both vigrahas (deities) were reinstated after the English drove Tipu out. From 1875 through 1900, the Ullanad Panikars stepped in. They offered the Lord their free secures in addition to contributions from their family properties.

The Madras government returned the Devadaya to Tipu Sultan in 1841. Slowly and surely, the temple prospered. All of the sections were rebuilt, refurbished, and embellished. Various improvements were implemented at the temple under its manager, Sri Konti Menon, towards the start of the twentieth century. In 1928, the Zamorin was once again in charge of the temple’s management.

A Sathyagraha was started in 1931-32 under the direction of Kerala Gandhi, i.e., Kelappan, a notable Kerala group leader, to ensure the admittance of untouchables into the temple. This culminated in the Travancore Temple Entry Proclamation in 1936, followed by similar steps in British Malabar in 1946 and Cochin in 1947. Since then, every Hindu has been permitted to see the Lord outside the sanctum sanctorum (Sree kovil). Nonetheless, the Namaskara Sadhya (feast) was only served to Brahmins at the Uttupura (dining hall). Finally, this custom was extinguished. Since January 1, 1982, the Devaswam has fed 500–1000 pilgrims with Prasadam (Prasada Oottu). Devotees can also make a donation of any amount for free feeding.

A terrible fire broke out in the temple on November 30, 1970, after the sixth day of the annual Ekadasi celebration. Hindus, Muslims, and Christians fought the firing shoulder to shoulder. Despite the raging fire for 5 hours, the Srikovil, Guruvayurappan’s vigraha, and the sub-shrines of Ganesha, Ayyappa, and Devi, as well as the flagstaff, remained undamaged — a modern-day miracle. 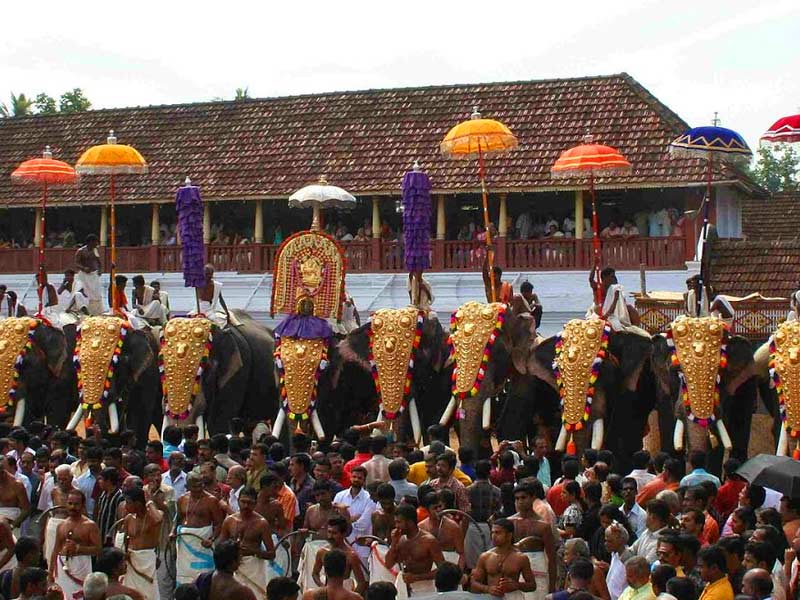 Some prominent festivals observed at Guruvayur Temple include Ulsavam, Vishu, Ashtami Rohini, Mandalam, Ekadasi, Ashtami Rohini, Kuchela’s Chembai Music Festival, and Narayaneeyam Day. The religious pictures are brought out for a procession in Guruvayur town on certain occasions. During festivals, the entire area is decked with priceless butter lamps, giving the appearance of a bygone era. 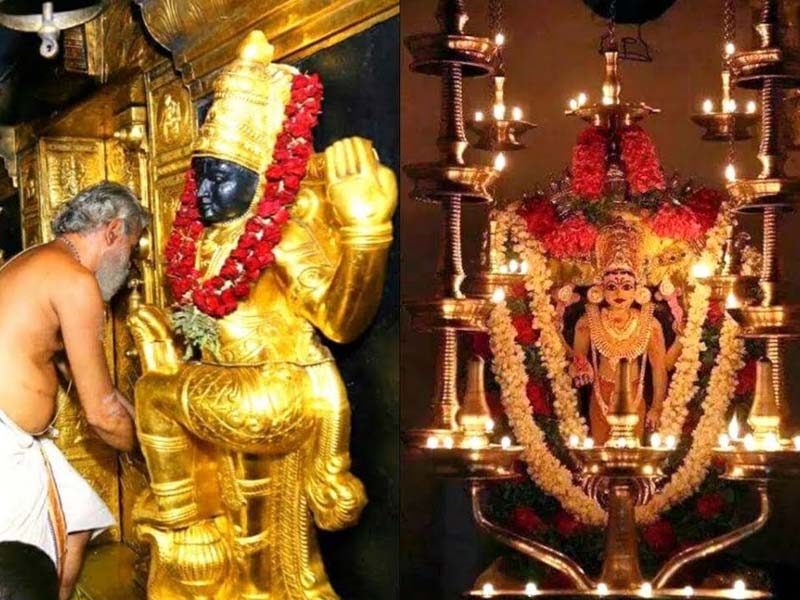 Brihaspati (Guru) and Vayu have installed the main idol with the blessings of Lord Shiva and Goddess Parvati. According to legend, when the temple of Dwarka was drowned under the water, Guru and Vayu were tasked with finding an equally sacred location for a new temple. When they discovered the spot, it became known as Guruvayur, and the deity, Guruvayurappan.

The first mention of Guruvayur can be found in the fourteenth-century Tamil text ‘Kokasandesam.’ It is referred to as Kuruvayur in this scripture. Guruvayoor is mentioned numerous times in 16th-century writings. Melpathur’s ‘Narayaniyam’ helped make the temple famous. Every year, the greatest number of marriages take place at the Lord’s home.

The temple’s structure is reminiscent of traditional Kerala temple architecture. Vishwakarma, the celestial architect, is said to have designed the temple. On Vishu, the temple is built so that the Sun God (Surya) himself pays respect to Vishnu. At this point, the first rays of the Sun fall straight on Vishnu’s feet. The primary entrance to the shrine is on the east side. The Lord’s idol may be seen from the main doorway.

The ‘Chuttambalam’ in the temple is a gold-plated ‘Dhwajastambham’ or flag-mast 33.5 meters tall. Another interesting attraction is the ‘Dipastambham,’ or lamp pillar, illuminated in the evenings. Just ahead of this pillar is the entrance to the inner sanctum. On either side of the passage, ten magnificently carved pillars stand on two high plinths. It was here that the golden slokas of ‘Narayaniyam’ in honor of Lord Guruvayur were penned.