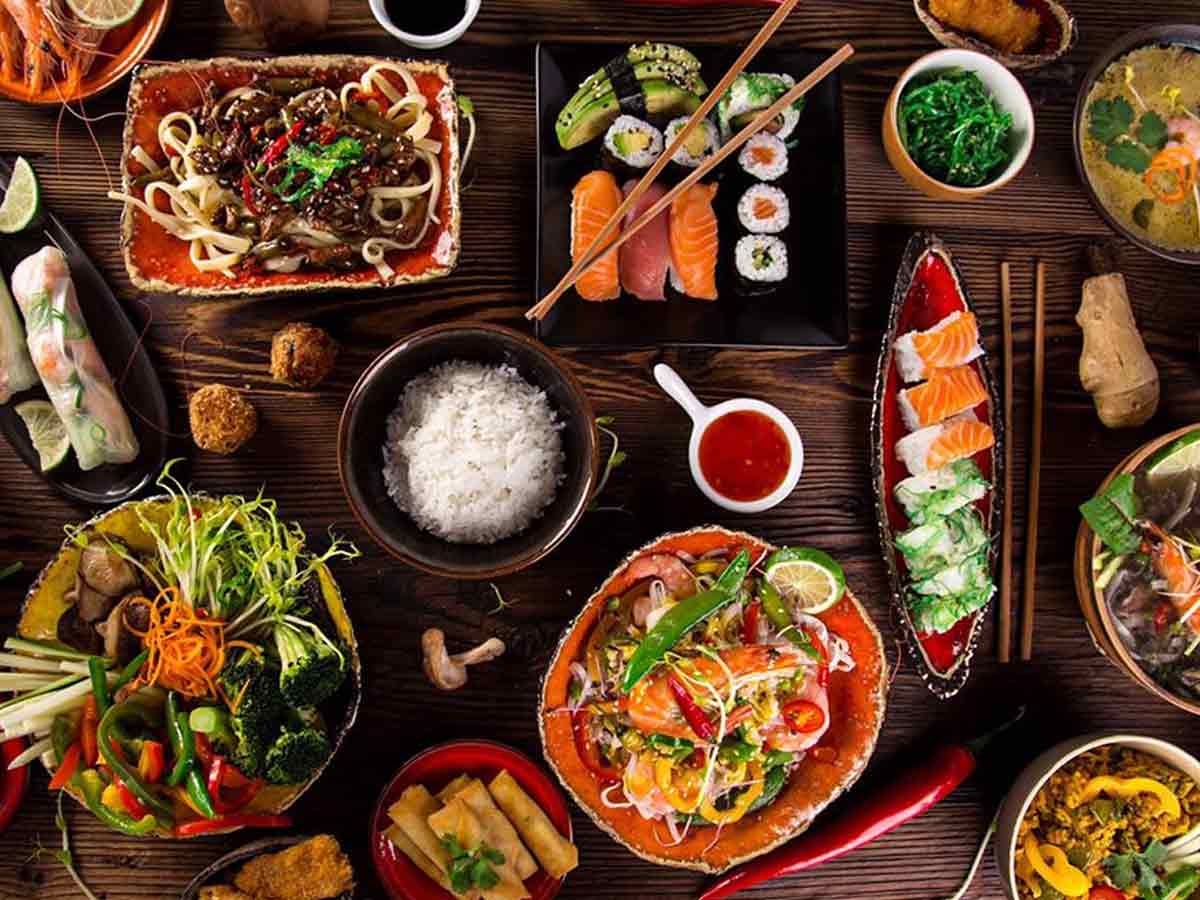 As many of you are probably aware, Japan is well-known for its delectable and distinctive food. However, the first thing that springs to mind when we think of Japan food is fish and rice. This blog article will offer you a broader perspective on Japanese culinary culture and educate you on what to order from the minute you sit down at a restaurant.

For a good reason, Japan food is one of the most popular in the world. Traditional Japan food stresses diversity and balance and is based on the “rules of five.”

It’s no surprise that Japan’s cuisine is so delicious and highly valued by people worldwide, with its aesthetic of attractively presented food and the use of fresh, high-quality seasonal ingredients. This is accomplished by combining five colors (black, white, red, yellow, and green), five cooking methods (raw food, grilling, steaming, boiling, and frying), and five tastes. Even a single meal of one soup and three sides coupled with rice, Ichiju-Ju, San-sai, embodies these concepts. If you want to learn more about Japan food, 8 of the greatest traditional Japan food.

Japanese cuisine is world-renowned, but there is so much more to taste in Japan than sushi! Of course, many of us are familiar with sushi, tempura, and ramen. However, Japanese culinary culture is far more diverse.

So, what Japan food should be on your bucket list if you visit the country?

To help you decide, we’ve produced a list of a few delectable Japan food that everyone should taste. 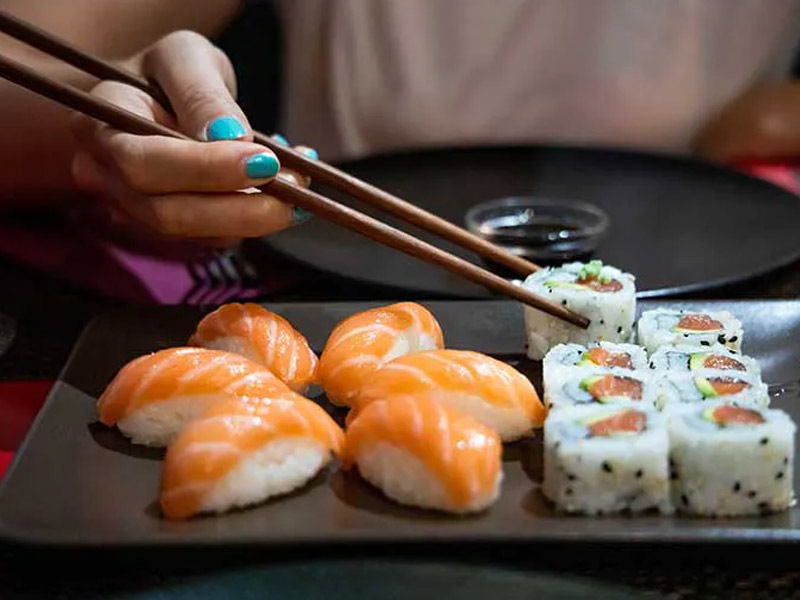 Sushi is one of the most well-known Japan food in the world. It is available in a variety of formats and prices, ranging from the entertaining Kaiten-Sushi (conveyor belt sushi), where visitors can enjoy sushi for a reasonable price of about 100 yen per plate, to expensive, traditional Edomae sushi (Edo-style sushi), where you will sit at a quiet counter, the sushi is prepared and served right in front of your eyes.

Sushi is typically defined as a meal of pressed vinegared rice with a piece of raw fish or shellfish on top, known as a Neta. Sushi is often served with soy sauce and wasabi. However, individuals who dislike wasabi can request “Sabi-Nuki” (meaning “without wasabi”).

Sushi may be eaten with chopsticks or by holding it in your hand. However, there is one point you should keep in mind. When dipping the sushi in soy sauce, flip it over and apply the soy sauce to the Neta rather than the rice. This is done to keep the rice from soaking up too much soy sauce and masking the natural flavor of the “Neta.”

Another must-try dish is sashimi. Sashimi is raw fish cut into bite-sized pieces, similar to sushi but without the rice. The exceptional quality of the fish collected in all parts of Japan makes it an excellent choice whether in Tokyo, Kyoto, or elsewhere in Japan.

Sashimi, like sushi, comes in a plethora of variations. More frequent and popular varieties are Maguro and other tuna types, salmon, mackerel, and sea bream. Clams, uni, or sea urchin, and salmon roe are additional options. Order a range of fish and seafood to see which ones you prefer.

Sashimi is often flavored with soy sauce. It is optional to add a dot of wasabi on the top of the sashimi for added heat. Certain types of fish, like horse mackerel, will be served with ginger instead of wasabi. 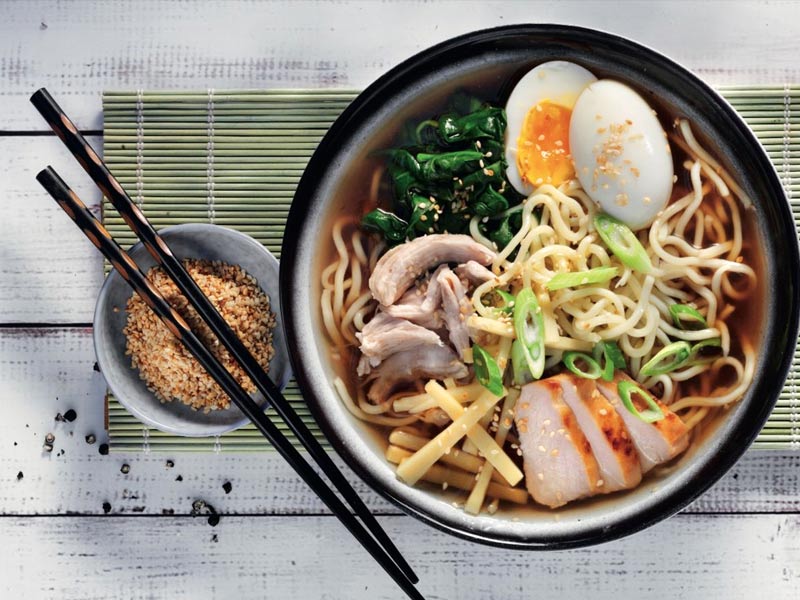 Most people are familiar with ramen, particularly the world-famous instant type. Still, while visiting Japan, you will be astonished by its wonderful flavor (certainly not similar to its cup equivalent) and the vast array of diverse options.

The broth can be made with chicken, pig, beef, fish, or vegetables. It can be seasoned with soy sauce, miso, dashi, or a variety of other flavors. Typically, scallions, seaweed, tofu, and bamboo shoots are added. Still, there are so many ways to serve this meal that it’s hard to describe them all.

Not only does each area have its own recipe, but each restaurant has its own as well, resulting in some extremely unique and excellent dishes.

The noodles are produced particularly for ramen and have a distinct feel, soft but with a bite. Miso, salt, soy sauce, and curry are the most popular soup stocks.

Ramen is most likely the most popular Shime (the last meal at the end of a day or night out). It’s considered quick food, and while certain varieties can be served cold, it’s typically served hot, which is a blessing on cold days. 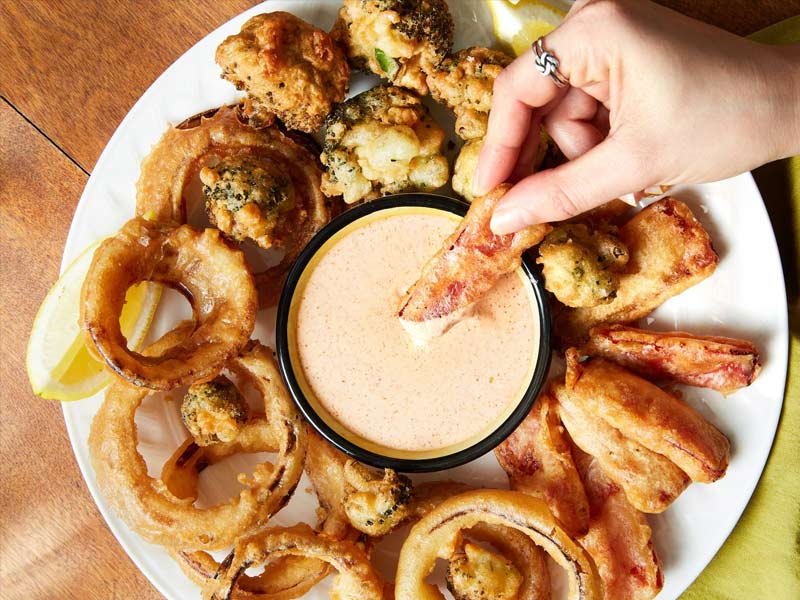 Tempura is a meal that consists of battered seafood, meat, and vegetables that are deep-fried in oil. Typically, the batter comprises flour and an egg. Before eating, tempura is normally dipped in the special sauce called tentsuyu. Tentsuyu is a sauce prepared with cooked broth from kombu or dried bonito, mirin, and soy sauce in a 4:1:1 ratio. For a more refreshing flavor, add ginger or shredded radish to taste.

Tempura is a battered and fried fish, seafood, or vegetables. Special attention is paid to the way the ingredients are chopped and the temperature of the batter (ice cold) and oil (extremely hot) for deep-frying to ensure that every mouthful is crisply fried to perfection. Tempura is eaten with a dipping sauce in the Kanto region surrounding Tokyo. In contrast, it is dipped in seasoned salt in the Kansai region around Kyoto and Osaka. 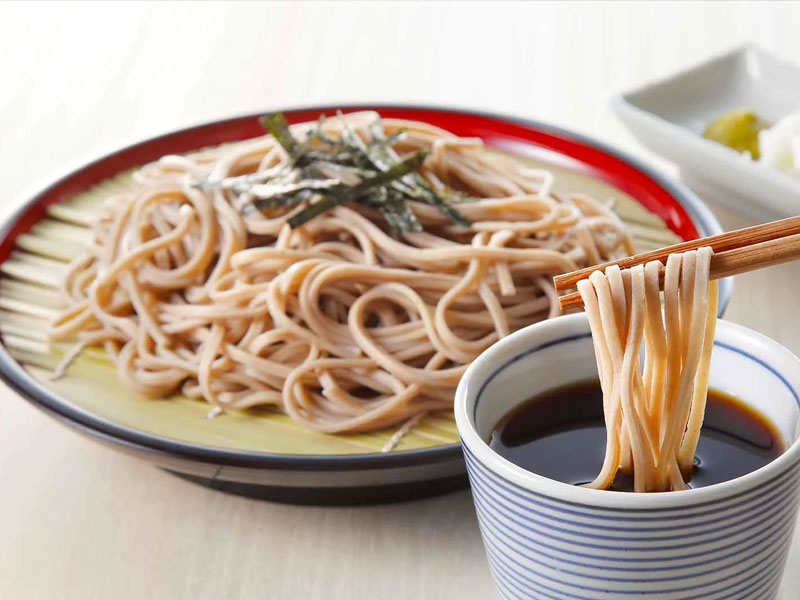 Soba is another sort of noodle dish that has been consumed for generations in Japan. Soba is a noodle dish prepared with buckwheat flour, water, and flour that has been thinly distributed and sliced into noodles with widths ranging from 1cm to 2cm. After cooking the noodles in hot water, they are eaten dipped in cold soup or with hot soup poured over them. The soba broth (Tsuyu) is essential for a good soba experience. It is generally made with kombu or dried bonito broth, seasoned with soy sauce and mirin.

Soba may be eaten hot or cold, making it a year-round favorite. This meal comes in a variety of flavors based on the season and area you visit. Remember to order a soba dish the next time you visit a Japanese restaurant!

Also Read, 7 Anime Themed Restaurants that will make you Otaku 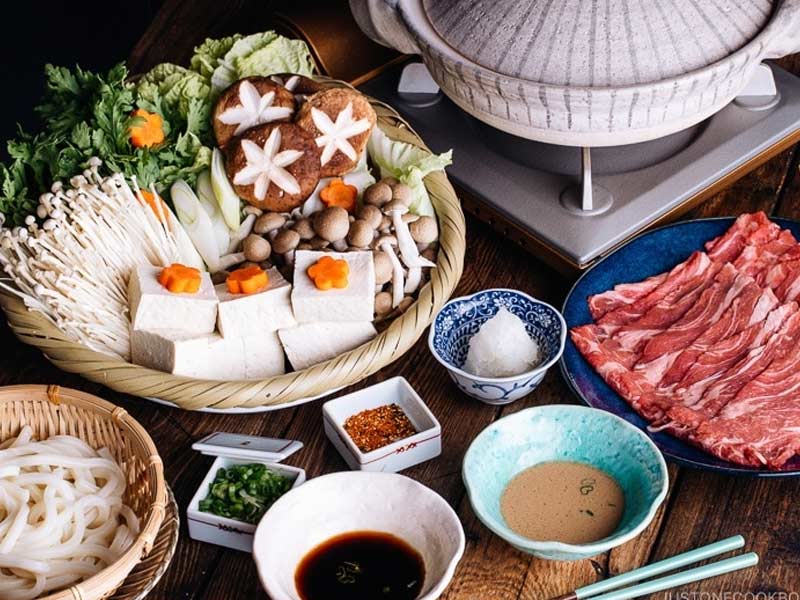 Nabe is a Japanese word that means “cooking pot.” It is also known as Nabemono (literally, “things in a cooking pot”). The name already tells you all you need to know about preparation. Still, it doesn’t begin to create a picture of the vast array of nabe available in Japan. This meal is available all year, but it is especially delicious during the winter months.

The meal is popular both in Japanese nabe restaurants and at home, is made by boiling various items in seasoned or unseasoned water, including meat, fish, shellfish, vegetables, and tofu.

Nabe is also well-known as the preferred meal of Sumo wrestlers. When we talk about sumo nabe, we specifically mean “Chanko nabe.” Meatballs, poultry, veggies, and noodles are common ingredients in Chanko nabe. It is intended to be provided with additional components for wrestlers to gain weight.

Shabu-shabu is another well-known name in the nabe family.

Shabu-shabu gets its name from the movement made while putting thinly sliced beef into a hot saucepan. The meal includes meat (typically beef and pig), veggies, and tofu. The meal is then accompanied by a sesame dipping sauce, ponzu (a lemon-based dressing), or a combination of the two.

Yose nabe (yose=putting together) is a type of nabe in which everything, i.e., meat, fish, veggies, and tofu, is cooked together in the same pot at the same time. Sukiyaki is a shabu-shabu variant in which the ingredients are simmered in sweetened water and soy sauce and served with a raw egg dip. It is often based on a miso or soy sauce soup.

The variety of nabe available in Japan is astounding, so go out and get some, experiment, and enjoy! 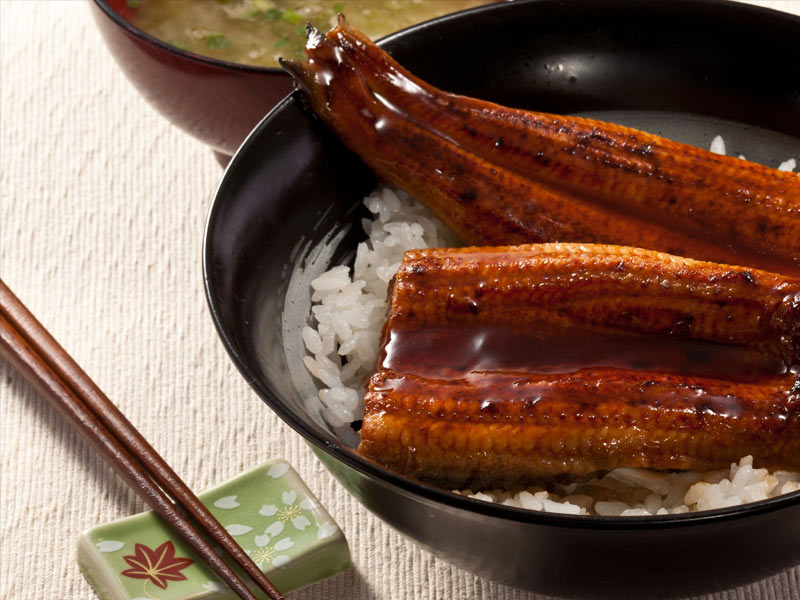 Unagi, sometimes known as eel, is a river-dwelling fish. It is a delicacy in high-class Japan food in Japan. Several informal eateries serve unagi dishes. At unagi restaurants, you can have Kabayaki, which is unagi skewered and cooked with a special sauce made of soy sauce, mirin, sugar, and sake. These restaurants also serve unadon, a dish of Kabayaki on top of white rice.

Another must-try traditional meal is Hitsumabushi, a Nagoya specialty. Its look may be surprising––cut-up Kabayaki on top of white rice––but it may be eaten in various ways, including with condiments like green onion and wasabi, or as Ochazuke by pouring warm green tea or some broth over it. Unagi is also popular as a health food to avoid summer heat exhaustion due to its high protein content and digestive benefits. 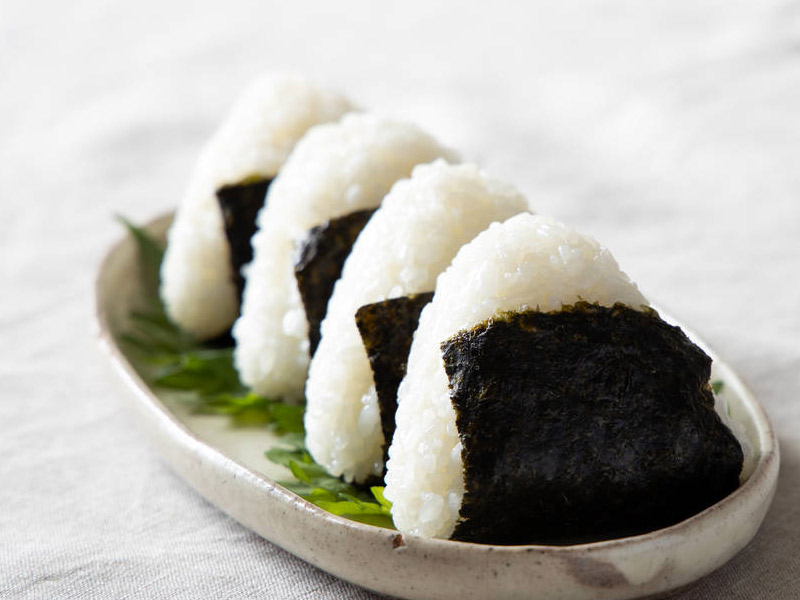 Who hasn’t seen the iconic Japanese rice ball, onigiri, in anime, movies, videos, or documentaries? While not commonly found on restaurant menus, this is the king of on-the-go meals. It’s available at almost every grocery shop and convenience store. This is a traditional option for a snack or light supper.

Onigiri, also known as Omusubi, may appear simple rice. Still, they frequently include a savory filling and are wrapped in a salty sheet of nori seaweed.

Kelp, pickled plum (umeboshi), salmon, and bonito flakes are popular tastes for onigiri. There are many different tastes available; visit a convenience shop or supermarket to discover what’s available.

Although you may make onigiri at home and buy it cheaply, some restaurants provide onigiri during a sit-down dinner, created by hand by chefs using high-quality ingredients. For its excellent rice balls, Onigiri Asakusa Yadoroku in Tokyo has won a Michelin star. 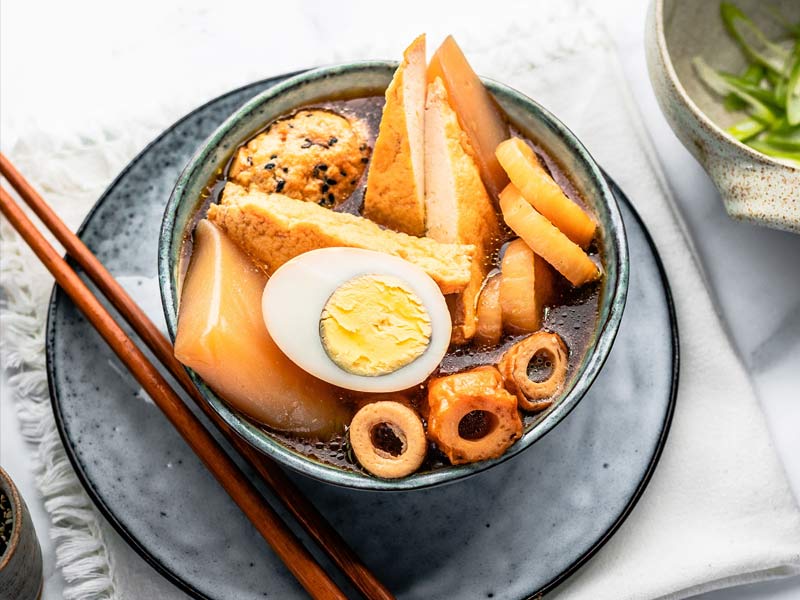 Oden is a delicious, light, hot dish that would be ideal on a chilly winter day. Another type of one-pot meal consists of numerous items (often eggs, konjac, fish cakes, and daikon) served in a dashi and soy soup.

While certain restaurants specialize in this dish, Oden may also be found in many Japan’s fast-food franchises and deli stores. Oden can be cooked in various ways (and its name changes from time to time). In Nagoya, for example, it may be referred to as Kanto-ni). How the components are cooked varies according to location. Oden is a fantastic, inexpensive, and unique food that will never tire you, especially if you’re traveling around Japan.