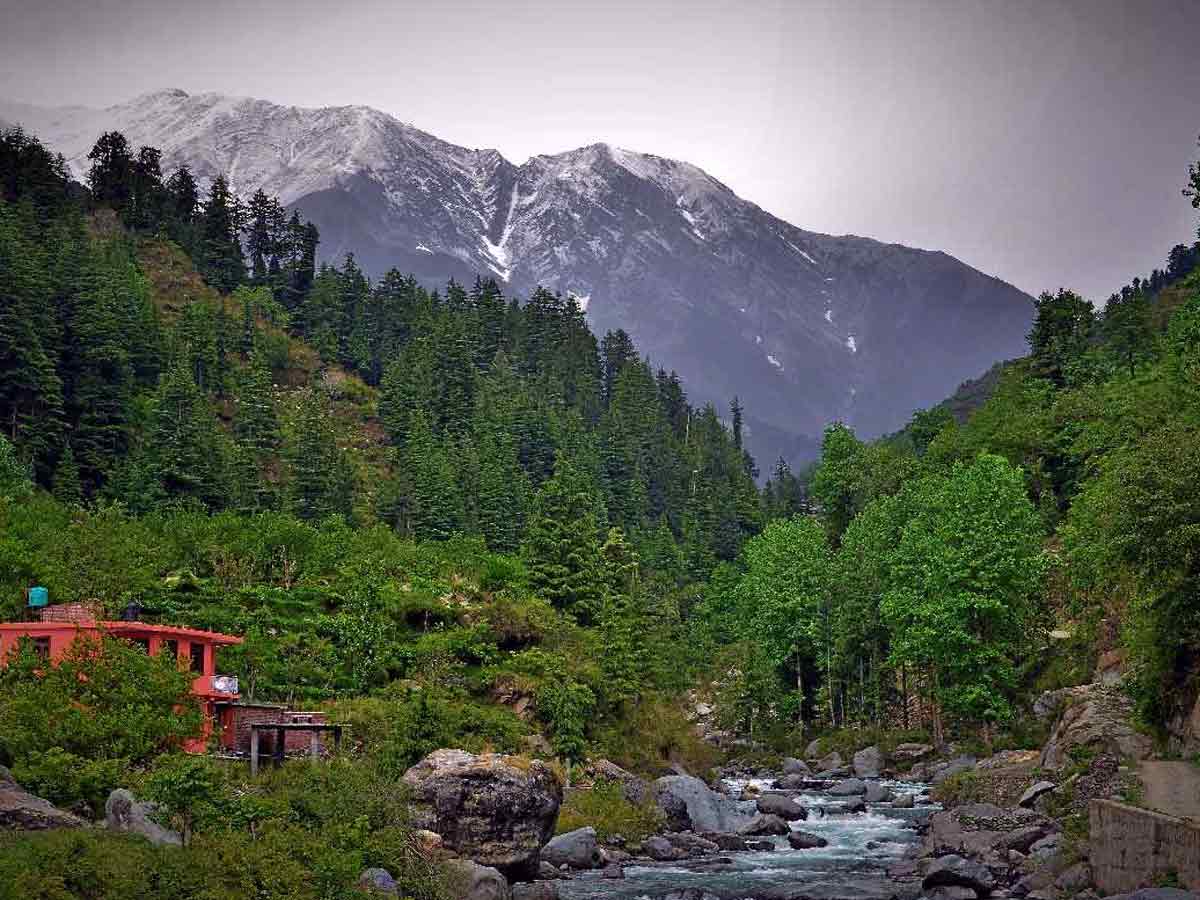 A secluded vacation location with minimal information available online. These two pieces of information were enough to pique my interest in visiting this quick escape Barot valley. It is an unspoiled valley, barely delineated by signboards or milestones, that held me captivated from start to finish.

When we arrived at Barot Valley, it was clear why it has been dubbed the “trekker’s paradise.” Rough terrain with freshly powdered snow on either side and thorny vegetation on either side. This unpolished jewel of Mandi district, at an elevation of 6000 feet above sea level, is also a part of the Uhl river valley.

The valley was once part of the Hydel Project, but it was subsequently dotted with modest villages and little stores. The valley is well-known for its trekking, trout fishing, and camping, all of which will have you going back for more.

The location is ideal not just for the adventurous traveler, but also for a family holiday. The valley, which is surrounded by pleasant stay homes and camping grounds, is a picnic location that should be on the itinerary of anybody planning a trip to Himachal.

The scent of newly produced mustard oil, the sound of the Uhl flowing through the valley, the touch of the finely embroidered shawls, and the sight of the gorgeous scenery all combine to make Barot valley a feast for the senses.

How Do I Get To Barot Valley?

The valley, like many other places in Himachal Pradesh, is easily accessible from large cities such as Delhi and Chandigarh. Although it is not a popular tourist destination, Barot is accessible by all modes of transportation.

There is always the alternative of flying for individuals who would prefer to escape the hectic peak hours on the road. The Kullu airport in Bhuntar is 100 kilometers from the valley. It’s only around a 4-5 hour trip south to Barot. There are daily flights from both Delhi and Mumbai. Another alternative is the Gaggal airport near Dharamshala, which is around 110 kilometers from the valley. Kullu is a more convenient option because cabs and public transportation to Barot Valley from the airport are constantly available.

The Jogindernagar railway station, 36 kilometers from the valley, links trains from Chandigarh, Palampur, Ghatasni, and other locations. The railway station is also linked to Pathankot by a narrow gauge rail network, and the Pathankot-Mandi road is only 96 kilometers away from Barot Valley.

There are two simple ways to the valley from Delhi: one from Mandi and one from Jogindernagar. They travel almost the same distance and in the same time. The journey through Mandi is one of the most unforgettable, and it would be an excellent road trip with friends or family.

If you prefer public transportation, Himachal Road Transport Corporation buses are available. Buses run frequently, usually every half hour, particularly from the Jogindernagar railway station. This is based on the premise that you would take a bus from Delhi to Barot.

The journey time would be between 13 and 15 hours. Valley public transportation has an enduring allure. This occurs to me once again as the bus travels around the hairpin curves of the local roads, rounding corners into the huge alpine greenery.

When Is the Best Time to Go?

Except for the monsoon season, the valley does not endure severe weather. It receives a lot of rain because of its high elevation. This makes it unsuitable for activities like hiking.

Aside from that one element, the valley may be visited by year. The average temperature is approximately 16° C, with winters and summers providing just the balance of warmth and cold. Because most visitors stay for only a few days, the climatic conditions are excellent.

Pastel colors were everywhere throughout the valley, and they didn’t go unnoticed. The natural colors of the river, trees, and paths were all pleasing to the eyes. This charming small valley has so much to offer that I couldn’t put it into words.

This is the valley’s only natural and clean source of water, coming from the Thandar glaciers. It was soothing just to see the Uhl flow smoothly from the Dhauladhar mountains. The region is surrounded by emerald forest lines that pass through the barrage and reservoir.

This is a popular tourist destination in the area and a great place to camp. If you hike with a pre-arranged group, they will equip you with weatherproof tents and sleeping bags. If you’re traveling alone or want a more private setting, you may bring your camping gear and pitch a tent in one of the camping areas. There are additional homestay alternatives available in this area.

Explore the diverse and picturesque Nargu wildlife refuge by walking to the river’s edge. The park, which has a crescent-shaped border, is home to a diverse range of inhabitants, including the unique Himalayan monal and Ghorals, which are miniature antelopes. The park, which was established in 1962, has the age-old allure of biodiversity parks.

The months of April-May and August-September are great for visiting the refuge. The climatic conditions are ideal for going animal watching. This also helps the park’s trekking experience. From a short walk to the Barot settlement, which is next to paths leading up to Kullu.

Chuhar Valley is in Himachal Pradesh’s Mandi district. This valley includes Barot, as well as Jhatingri hamlet and Hurang Narayan temple, which are also important attractions. Another important draw to this location is the International Mandi Shivratri festival, which is held yearly by the valley’s residents.

If tranquility were a place, it would surely be Mandi’s Chuhar valley. The valley, around 35 kilometers from Barot, is home to well-known spiritual sites like as the Jhatingri and Huang Narayan temples. The temple, built in the original Pahari architectural style, is regarded to be one of the most important religious monuments in Mandi.

According to legend, the Nad (priests) of Huang Narayan’s court reincarnates with his authority every five years. The Mad community is one of the most revered and honored. In this modest home of Lord Shiva, the international festival of Mandi Shivratri is celebrated. Three deities have been summoned to meet the great Lord Radha Madhav (King of Mandi).

In addition, the village is a no-tobacco zone, and smoking is strictly forbidden. The air around here is of the purest composition, and it was a pleasant time for me.

A historical tour of the Shanan Hydel Project

This endeavor was the seed that grew into the valley. The Shanan Hydel Project is at the valley’s center. The site is notable for being the first-ever megawatt hydro plant in India, and it also acts as an edutainment destination in Barot.

The Shanan powerhouse is next to the project setup. This is one of two hydroelectric power plants in Himachal. The power station’s ease, which is now operated by the Punjab state, will be transferred to the Himachal Pradesh government in 2024.

Fishing for trout at Barot Farm

Fishing with a hook and line will never go out of fashion. Fishing, whether for a beginner or an experienced angler, is a sport that teaches patience while rewarding with an equally exciting catch.

The Trout farm, built in 1959, is only a 15-minute walk from the Uhl barrage. The farm’s crystal clear waterways are ideal for catching the fish. Trout fishing is quite popular here, and any local would be delighted to show you around the farm and fishing area.

Trekking through the notorious snow-laden slopes of Bada Bhangal, Kullu Manali, Bir Billing, and Kothi, the number of trekking paths that lead from Barot is simply infinite and enthralling. The air surrounding Barot is so clean and untainted that you’ll never want to return to the smoke-filled city life.

Throughout your journey, the deodars and pines form an arch around you. The valley has its own rhythm, which is often disturbed by the crunch of leaves and the sounds of the waterfalls.

The low-pitched talk and sing-songs of the tribes who return home from the highlands add to this lovely beat. I was fortunate to have passed two of them, who stopped and handed us freshly selected fruits to keep us going for the rest of the trek.