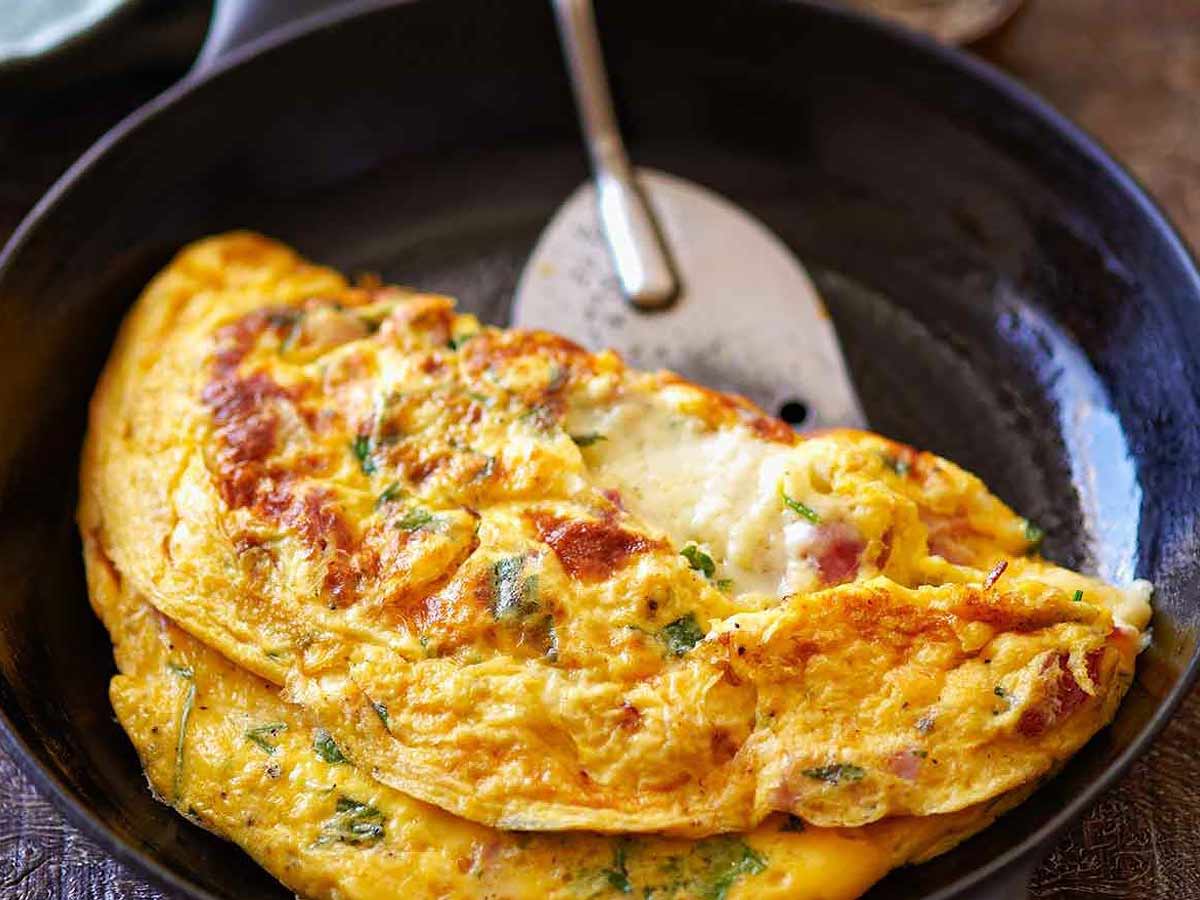 An omelette or omelet is a meal prepared from beaten eggs cooked without stirring in a frying pan with butter or oil, similar to scrambled eggs. Folding the omelet over ingredients like chives, veggies, mushrooms, meat (typically ham or bacon), or a mix of the abovementioned is fairly popular. A tiny quantity of milk, cream, or water is commonly used to beat whole eggs or egg whites.

Now that we have the technical definition of an Omelet let us look at the origins or the history of this versatile and amazing dish.

It is thought that the first omelets were invented in ancient Persia. They were “almost indistinguishable” from the Iranian delicacy Kookoo Sabzi at the time but slowly gained their individualistic quality over time. As evident in the culinary book “Breakfast: A History,” the French word omelet was said to have been first used in the mid-16th century.

There are also rumors of a local legend about Omelets and the famous French general Napolean Bonaparte. The tale tells how Napoleon Bonaparte and his army were passing through southern France when they stopped for the night near the village of Bessières. Napoleon ate an omelet made by a local innkeeper and declared it a gastronomic pleasure. He then told the villagers to collect all of the eggs in the village and cook a massive omelet for his troops the next day. This is thus the story of how the omelet came to be: a dish loved by all classes of people due to its versatile nature.

Omelet recipes around the World

There have been many recipes created since then. Still, the best and easiest omelet recipe, according to the majority, would be the omelet recipe with cheese!

Nonetheless, here are some Omelet recipes that are sure to tickle your tastebuds! 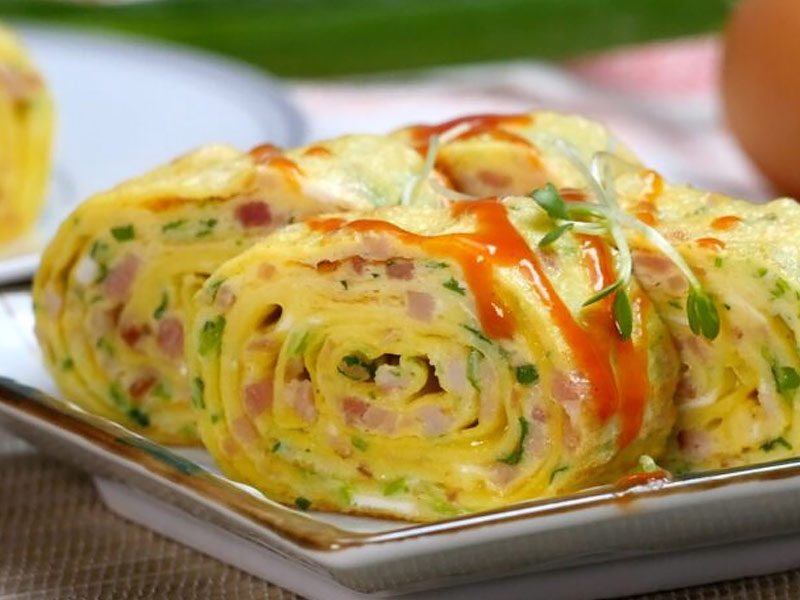 Tamagoyaki is a classic Japanese omelet recipe made with eggs, mirin, soy sauce, bonito flakes, sugar, and water, then fried in a rectangular frying pan. Cooking the omelet involves cooking a small layer of egg mixture and swiftly rolling it up with chopsticks to make a sausage shape in one end of the pan. A thin coating of an egg is then added to the bottom of the pan and rolled over to the other end of the pan, with the original rolled, cooked egg in the center.

This technique is continued until the egg is completely depleted, resulting in a thick cylindrical omelet with numerous thin layers. Using a sushi mat, this is then pressed into a rectangular or circular cross-section and cut into segments for serving. Some chefs use this omelet recipe to create omelet art. 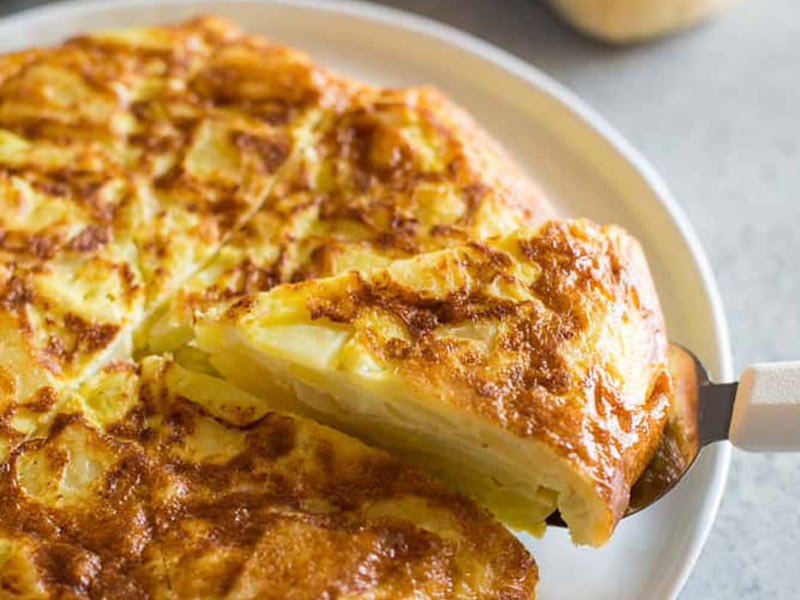 The Spanish tortilla de Patatas, also known as the ‘Tortilla Espanola in all other Spanish-speaking regions, seems to be a thick omelet recipe made with potato slices sautéed in cooking oil. It usually has diced onions and, less frequently, various ingredients like cheese, bell peppers, or chopped ham. 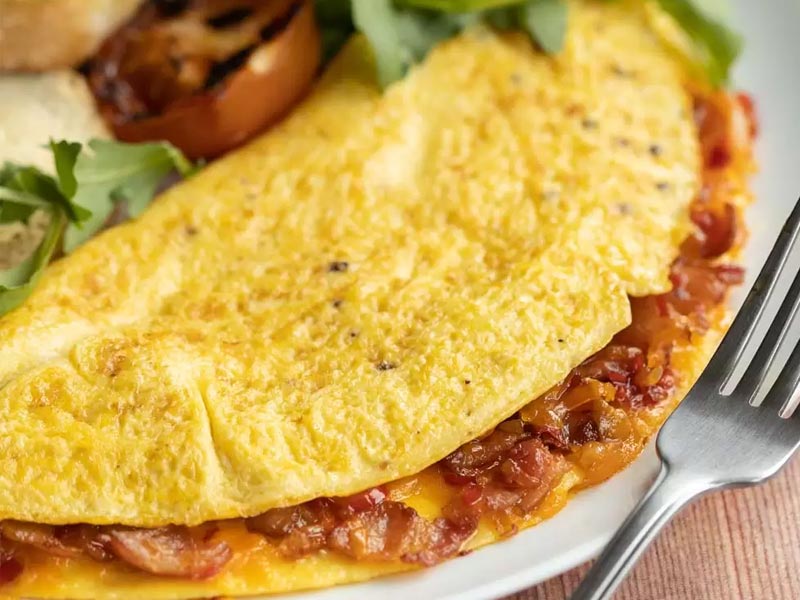 This Omelet recipe is one for the fitness freaks. It’s healthy with the perfect balance of guilty!

It’s not often that you see the terms “low calorie” and “bacon” in the same phrase. However, this omelet recipe makes it plausible. Substitute the turkey bacon in the fatty pork bacon, and then use skim milk instead of full fat. The caramelized onion in this omelet recipe adds a smokey sweetness. Using egg whites instead of whole eggs reduces cholesterol levels. Although be careful when you substitute egg whites for one entire egg because you’ll need at least one yolk to hold everything together. 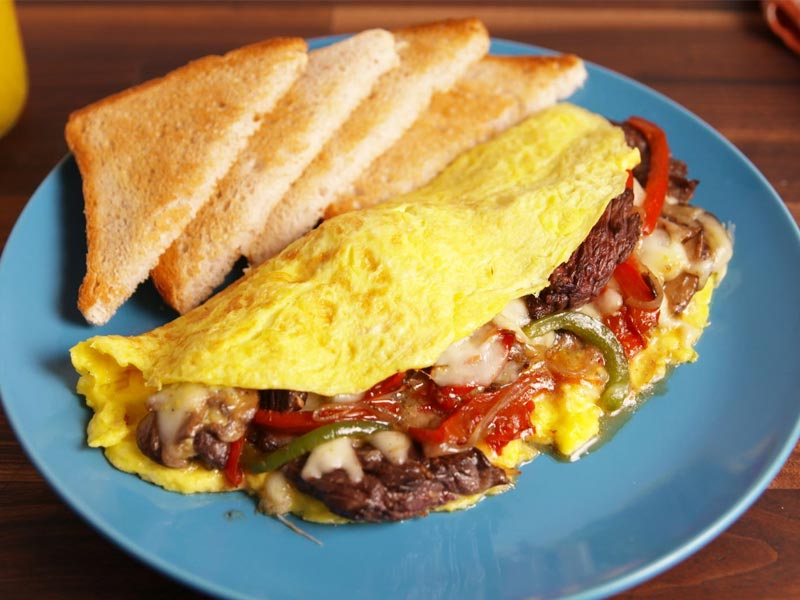 The Philly Cheese-stake Omelet recipe is maybe one of the most loved omelet recipes in the US. Philadelphians have firm beliefs about what sort of cheese to use, so be forewarned. If you choose the incorrect kind of cheese, you’ll get an earful from this cheese-obsessed city. The classic American cheese melts well, but you may use any sort you like. Shaved flank steak or leftover steak pieces work well for this omelet recipe, and sizzling onions can be added to complete the dish. If you want to amp up the savouriness, drizzle with a little sriracha before serving. 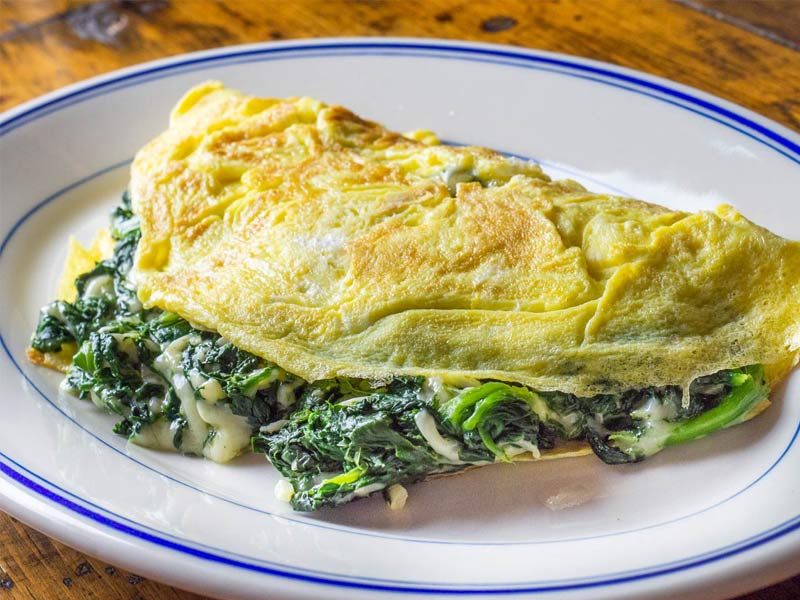 The Palak or Spinach Omelet recipe is a great way to utilize leftover spinach from last night’s dinner or when you want something healthy and eggy for breakfast. All you have to do is mix the spinach in your omelet mix and add a pinch of salt and some water (to make the omelet fluffy). Then you add ghee to the frying pan, pour the mixture into the pan and then put the lid on top for approximately 2 mins before flipping the omelet to its other side.

You can store the mixture in the refrigerator for 10 mins if you want to add more flavor to the Spinach omelet recipe. 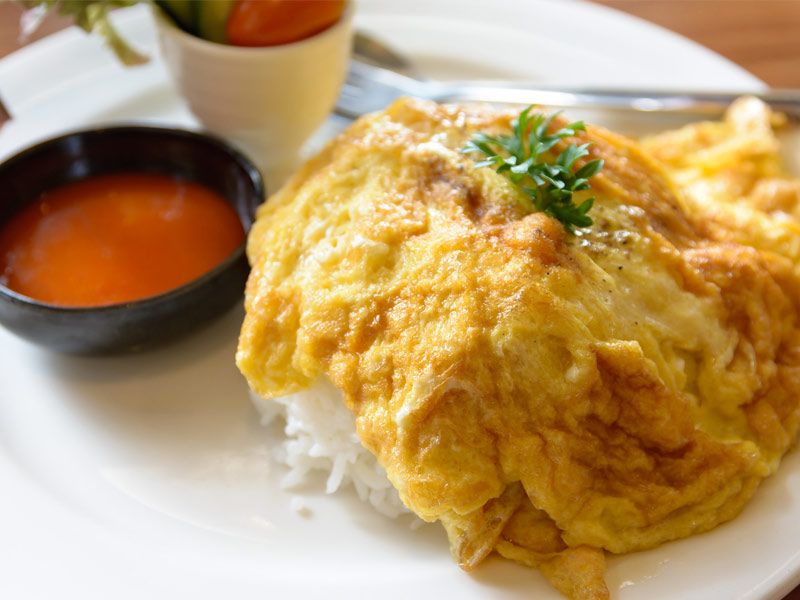 A classic Thai omelet is known as Khai Chiao or ไข่เจียว (Khai meaning “egg” and Chiao meaning “oil-fried”), and it is made by deep-frying beaten egg mixture with a little amount of fish sauce in a wok filled with 1-2 cups of vegetable oil and served over steamed rice. Sriracha sauce and cilantro are frequently offered alongside the meal. Khai Chiao Songkhrueang is a variant on this meal. A simple egg omelet recipe is served with a meat and vegetable stir-fry. Khai yat sai, or “eggs packed with filling,” is another form of Thai omelet.

The basic and easy omelet recipe is lightened up to make this delectable Greek omelet by simply only using egg whites. Still, I don’t believe this means the flavor is compromised. Because the salty feta cheese, kalamata olives, luscious cherry tomatoes, and iron-rich spinach make the omelet taste like they’re straight from the Greek islands. A side of grilled pita bread completes the image, making you feel as though you’re in the lovely city of Athens!