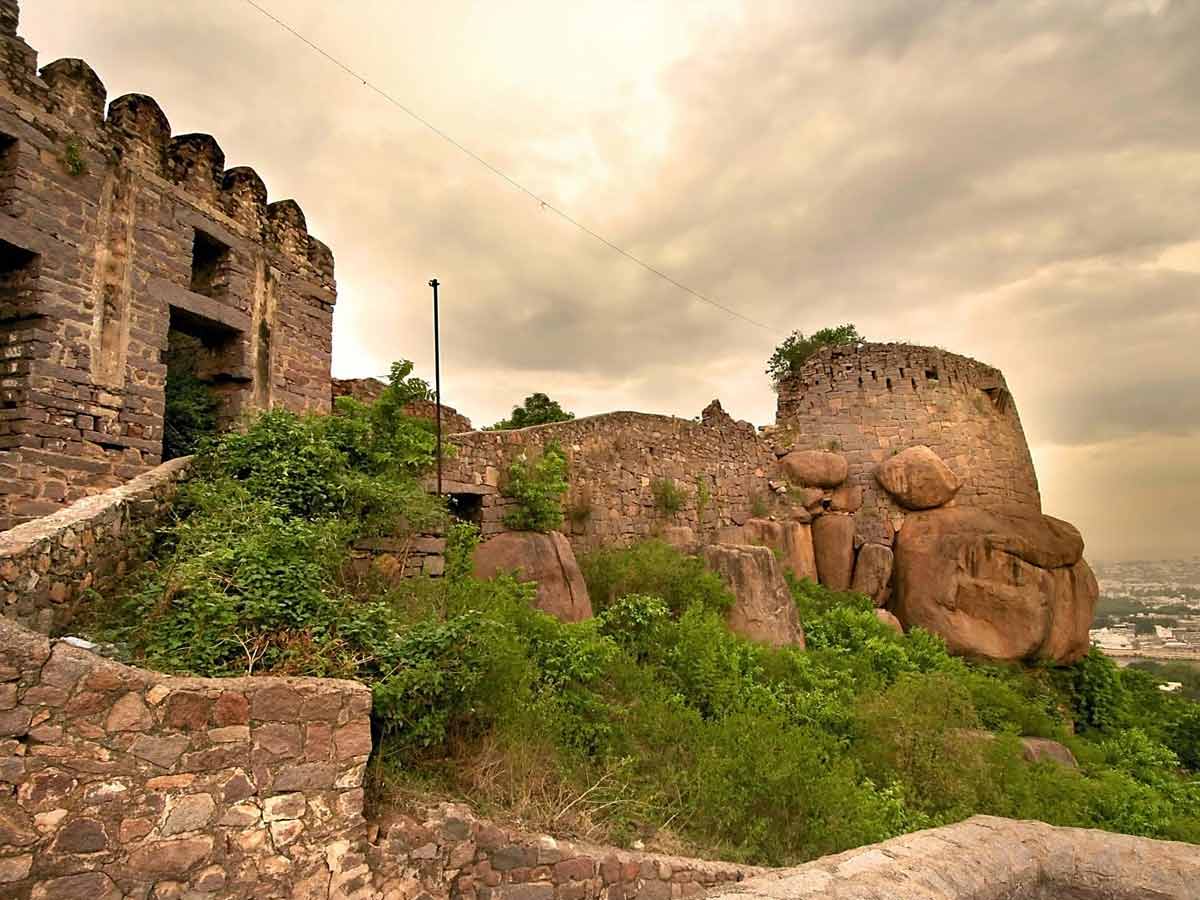 Golconda Fort, near Hyderabad, Telangana, India, is a fortified fortress erected by the Kakatiyas and an early capital city of the Qutb Shahi dynasty (c. 1512–1687). Golconda prospered as a trading centre for big diamonds, known as the Golconda Diamonds, due to its proximity to diamond mines, particularly the Kollur Mine.

The region is home to some of the world’s most famous diamonds, including the colourless Koh-i-Noor (now owned by the United Kingdom), the blue Hope (US), the pink Daria-i-Noor (Iran), the white Regent (France), the Dresden Green (Germany), and the colourless Orlov (Russia), Nizam and Jacob (India), as well as the now-lost Florentine Yellow, Akbar Shah, and Great Mogul diamonds.

In 2014, UNESCO placed the complex, along with others in the region, on its “tentative list” to become a World Heritage Site, under the designation Monuments and Forts of the Deccan Sultanate (despite there being several different sultanates).

Shepherd’s Hill was its original name (Golla Konda in Telugu). A shepherd child, according to folklore, found upon an idol on this rocky hill. The news was passed on to the governing Kakatiya ruler, who built a mud fort around the holy site. The fort was taken over by Bahamani kings after 200 years. Golconda gradually grew to prominence under the Bahmani Sultanate.

Around 1501 Sultan Quli Qutb-ul-Mulk (r. 1487–1543), a Bahmanid governor dispatched to Golconda, founded the city as the seat of his authority. During this time, Bahmani power eroded, and Sultan Quli declared independence in 1538, establishing the Qutb Shahi dynasty in Golconda.

The first three Qutb Shahi sultans developed the mud fort into the current edifice, a vast granite stronghold reaching roughly 5 kilometres in circle, over a period of 62 years. The capital of the Qutb Shahi dynasty remained here until 1590, when it was moved to Hyderabad. The fort was extended by the Qutb Shahis, whose 7-kilometer outer wall encircled the city. Golconda had a thriving cotton-weaving business in the early seventeenth century.

Cotton was manufactured in large quantities for both domestic and foreign markets. Muslin and calico were used to make high-quality plain and patterned textiles. Plain fabric came in white or brown, bleached or dyed, and was available in bleached or coloured varieties. Persia one of the most ancient civilizations on the planet. Prints produced with indigo for blue, chay-root for red, and vegetable yellow for yellow were used to create patterned textiles. Exports of patterned textile primarily went to Java, Sumatra, and other eastern nations.

After an eight-month siege at the hands of Mughal emperor Aurangzeb, the fort ultimately fell into disrepair in 1687.

The renowned Koh-i-Noor and Hope diamonds, as well as other jewels, were originally held in a vault within the Golconda Fort.

Golconda is known for the diamonds cut in the city during the Kakatiya period, which were discovered in the south-east at Kollur Mine in Kollur in Guntur district, Paritala and Atkur in Krishna district, and located near Kollur in Guntur district. India possessed the world’s only known diamond mines at the time. Golkonda was the diamond trade’s market city, and stones traded there originated from a variety of mines. The diamond trade was well-known in the fortress-city behind the walls.

Also Read, Shekhawati: The Unexplored Beauty with an Ancient Past

Its name has been connected with tremendous riches and has taken on a generic connotation. This classification is used by gemologists to describe a diamond that is nitrogen-free (or almost nitrogen-free); it is also known as “Golconda” material. The mines of Golconda are thought to have produced a number of famous gems, including:

By the 1880s, English speakers were using the term “Golconda” broadly to refer to any very wealthy mine, and later to any source of tremendous riches.

The word “Golconda” gained a mythical aura and became linked with immense riches during the Renaissance and early modern times. The mines yielded wealth to the Qutb Shahis of Hyderabad State, who controlled Golconda until 1687, and then to the Nizam of Hyderabad, who dominated after independence from the Mughal Empire in 1724 until 1948, when Hyderabad was absorbed into India. The Golconda siege took place in January 1687, when Mughal Emperor Aurangzeb led his armies to besiege the Qutb Shahi dynasty at Golconda Fort.

The Qutub Shahi Tombs are located in Hyderabad, India, near the famed Golconda Fort, in the Ibrahim Bagh (garden area). They house the graves and mosques erected by the Qutub Shahi dynasty’s successive kings. The galleries of the smaller tombs are one storey high, while those of the bigger tombs are two stories high.

Each tomb has a sarcophagus in the centre that overlies the real burial vault in a crypt below. The domes were originally covered in blue and green tiles, of which only a few fragments are now visible. UNESCO included the complex to its “tentative list” of World Heritage Sites in 2014, along with others in the region, under the designation Monuments and Forts of the Deccan Sultanate.

Naya Qila is an expansion of Golconda Fort, which was converted into the Hyderabad Golf Club amid opposition from local farmers and NGOs. After the residential section with several towers and the Hatiyan ka Jhad (“Elephant-sized tree”)—an old baobab tree with a huge girth—the ramparts of the new fort begin. It also has a war mosque. Because of the Golf Course, public access to these locations is restricted.