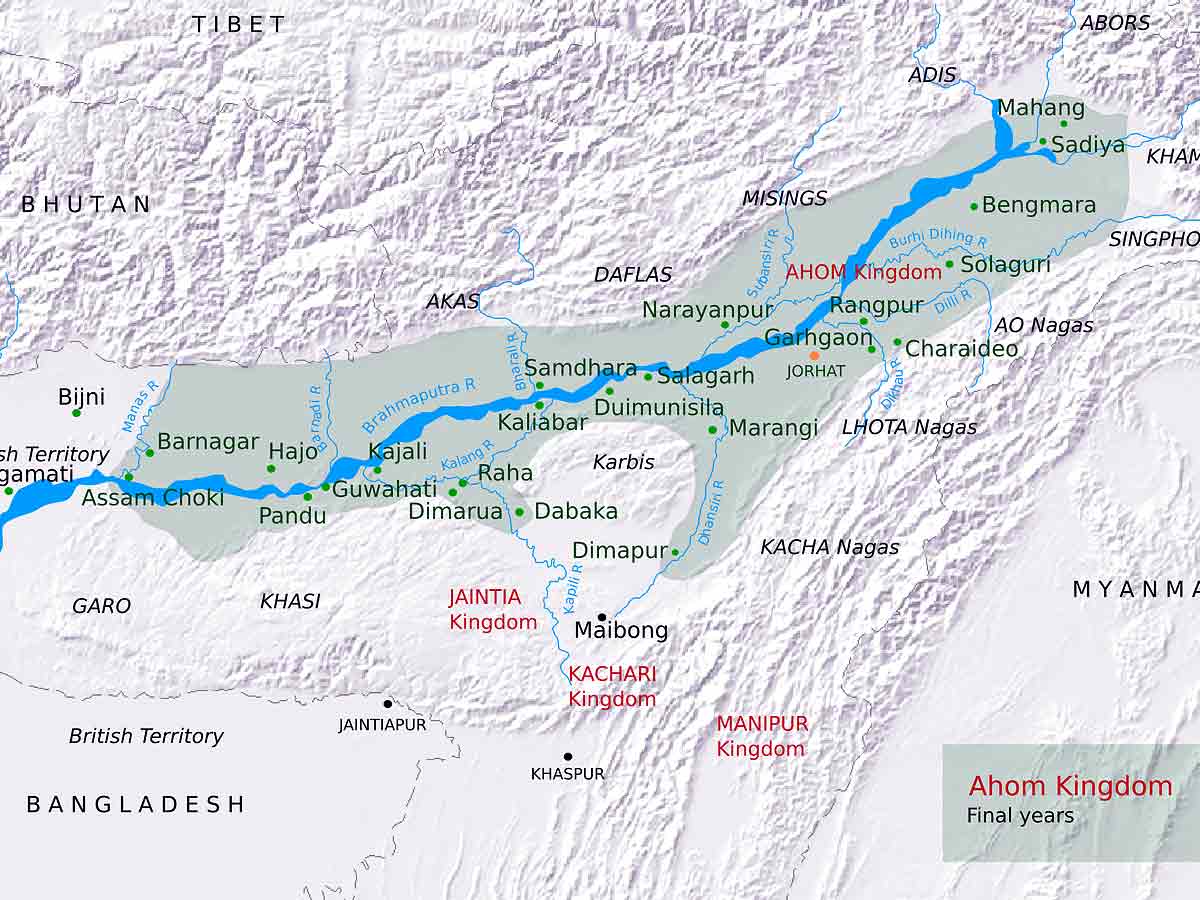 The Ahom kingdom also known as Ahom Empire was a late medieval  kingdom in Assam’s Brahmaputra Valley. It successfully resisted Mughal expansion in Northeast India for nearly 600 years, allowing it to retain its sovereignty. Sukaphaa, a Tai prince from Mong Mao (modern-day Yunnan Province, China), founded it as among in the upper reaches of the Brahmaputra based on wet-rice agriculture. It grew rapidly under Suhungmung in the 16th century and became multi-ethnic, having a significant impact on the political and social life of the entire Brahmaputra valley.

With the rise of the Moamoria rebellion, the kingdom weakened and fell victim to repeated Burmese invasions of Assam. With the defeat of the Burmese in the First Anglo-Burmese War and the Treaty of Yandabo in 1826, the East India Company gained control of the kingdom.

Though it became known as the Ahom Empire during the colonial and subsequent periods, it was largely multi-ethnic, with the ethnic Tai-Ahom people constituting less than 10% of the population near the end.

Ahomisation is the process by which people from various ethnic groups became a part of the Ahom population. The Ahom people’s identity in this kingdom was fluid, with the king controlling who belonged to it and who did not. Until 1401 (Assamese: xunor-xophura; English: casket of gold), the Ahoms called their kingdom Mong Dun Shun Kham but later changed it to Assam. After 1838, the British-controlled province, and later the Indian state of Assam, were known by this name. Until the end of its rule in the nineteenth century, the kingdom maintained close political ties with other Tai-states, particularly Mong Kwang (Nara).

The Ahom Empire was established in 1228 when the first Ahom king Sukaphaa arrived from Mong Mao and crossed the rugged Patkai mountain range to enter the Brahmaputra valley.

Sukaphaa was supported and joined in his journey from his homeland and settlement in the Brahmaputra valley by other Tai chiefs and common followers totaling approximately nine thousand people. On 2 December 1228, he crossed the Patkai and arrived in Namruk (Namrup), occupying a region on the south bank bordered by the Burhidihing river in the north, the Dikhau river in the south, and the Patkai mountains in the east.

The Ahoms brought with them wet rice cultivation technology, which they shared with other groups. People who adopted the Ahom way of life and polity were assimilated into their fold through a process known as Ahomization. As a result of this process, the Barahi people, for example, were completely subsumed, and some other groups, such as some Nagas and Maran peoples, became Ahoms, significantly increasing the Ahom population.

This process of Ahomization was especially significant until the 16th century when the kingdom under Suhungmung made large territorial expansions at the expense of the Chutiya and Kachari kingdoms.

The Ahomization process could not keep up with the rapid and massive expansion, and the Ahoms became a minority in their kingdom. As a result, the kingdom’s character shifted, and it became multi-ethnic and inclusive. Hindu influences were first felt at the end of the 14th century under Bamuni Konwar but did not become significant until the mid-17th century.

The Assamese language entered the Ahom court and coexisted with the Tai language for a time in the 17th century before eventually supplanting it.  The state’s rapid expansion was accompanied by the establishment of a new high office, the Borpatrogohain, on par with the other two high offices, and not without opposition from them.

The Sadiakhowa Gohain and the Marangikowa Gohain were established to oversee the territories captured from the Chutia and Kachari kingdoms, respectively. The Paik system was used to organize the subjects of the kingdom, which was initially based on phoid or kinship relations, which formed the militia. The kingdom was attacked by Turkic and Afghan rulers of Bengal, but it resisted. On one occasion, the Ahoms led by Ton Kham Borgohain pursued the invaders until they reached the Karatoya river, and the Ahoms began to regard themselves as the rightful heirs of the former Kamarupa kingdom.

The kingdom was also involved in countering Burmese aggression against other Shan states, particularly during the reign of Ahom king Suklenmung (1539–52), who intervened in a border dispute between the Burmese and the Mougkawg at the request of Mougkawg ruler Chao Siu-Kwei.

The Ahom capital Garhgaon is said to have been built on the advice of Chao Siu-daughter Kwei’s Nang Sao Seng, who was married to Suklenmung.

Pratap Singha (1603–1641) gave the Ahom Empire many of its mature characteristics. The kinship-based phoid system was replaced by the professional khel system, which reorganized the Paik system. The offices of the Borphukan and the Borbarua, as well as other smaller offices, were established under the same king. Until the end of the kingdom, no major restructuring of the state structure was attempted.

For several years, the rebels were able to capture and maintain power in Rangpur, but they were eventually driven out with the assistance of the British under Captain Welsh. The ensuing repression resulted in a large depopulation as a result of emigration and executions, but the conflicts were never resolved. A greatly weakened kingdom succumbed to repeated Burmese attacks, and control of the kingdom finally passed to the British after the Treaty of Yandabo in 1826.

The economic system of Ahom Empire

The Paik system, a type of corvee labor that is neither feudal nor Asian, served as the foundation of the Ahom Empire. Suklenmung introduced the first coins in the 16th century, though the Paik system of personal service persisted. When the Ahom Empire expanded to include former Koch and Mughal areas in the 17th century, it came into contact with their revenue systems and adapted accordingly.