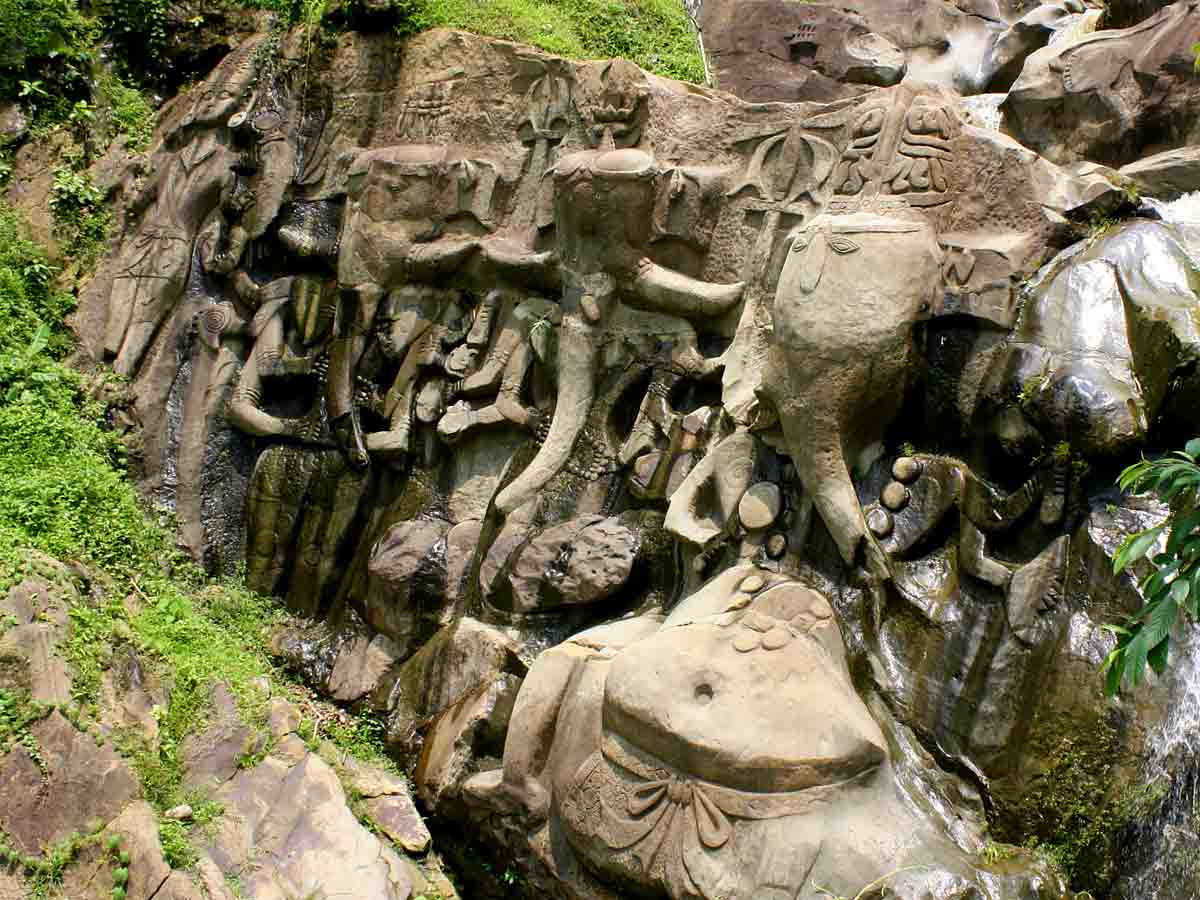 Unakoti is a famous hill 178 km from Tripura’s capital city, Agartala. A significant Shaiva pilgrimage site, Unakoti remains hidden from the eyes of most of the travellers and begs to be explored. The word Unakoti means one less than a crore. As per the legends, the hills of Unakoti had one 99,99,999 rock-cut images of Gods and Goddesses. Unakoti hills are on a part of the Jampui Hills, that are known for a dense forest cover. It is one of the most important historic sites in South Asia.

According to archaeologists, the famous stone sculptures were made somewhere between the 7th century and the 13th century. Some of them are of the opinion that these sculptures belong to two different periods. The locals have a lot of stories to tell about Unakoti, and some of them are entirely different from the other ones.

The Bas-Relief Structures of Unakoti

Bas-Relief structures are special types of sculptures when an image is projected at a shallow depth. This technique was used in parts of ancient Egypt and several civilisations in the east. In India, Unakoti is one of the largest bas-relief structures. The hills are surrounded by a dense green cover.

The Best time to visit Unakoti is during Spring or Monsoon. Summer could get a little harsh, just like other parts of India.

How To Reach the isolated Unakoti?

The condition of the road from Dharmanagar to Unakoti is not great, and it’s better to leave early. You can hire a cab or a taxi to reach Unakoti. However, the poor condition of the roads can be ignored for the mesmerising landscape you come across during the journey from Dharmanagar to Unakoti. Tripura is gifted with a vast green cover, and Unakoti is no different. From the Jampui forests to tea gardens, the landscapes are decorated with nature’s creations.

There’s no entry fee for visiting Unakoti and it is absolutely free to visit this impressive work of medieval construction.

If you are looking for a calm place in Tripura, you must visit Unakoti as most of the people still don’t know about this place.

After climbing down a few stairs, you will be greeted by a huge face carved out from a cliff. While the face may appear like that of Buddha, it is not as Unakoti is a Shaivite pilgrimage. After walking further, you will be greeted by another face, which is like the first one. This face is next to a waterfall or a small water stream known as Dhaluchhora. For the next few minutes, you need to follow the path of the stream and after a few hundred feet, you’ll find another cliff face and one more waterfall.

A huge bas-relief structure of Lord Ganesha is among the key attractions in the area. It is not the only structure near the cliff. There are some other structures as well that are dedicated to Lord Vishnu.

While you’ll be required to move downwards or straight mostly of the exploration, the experience will be like any other adventurous activity, such as trekking. As you move forward following the muddy trails, you’ll come across some other sculptures. After exploring the rocks downwards, you can take the steps going uphill to visit some more statues kept in a locked room.

The most famous sculpture in the entire Unakoti is Unakotishwara Kal Bhairav, an enormous image of Lord Shiva. The image’s height is nearly 30 feet. Unakoti got its name from Lord Unakotishwara. There’s also a sculpture of Nandi Bull just before the sculpture of Lord Shiva or Lord Unakotishwara. While little information is found about Unakoti in historic texts, it is believed to be over 1,000 years old. Some records hint the sculptures were made by Kamu Kamar, a great devotee of goddess Parvati. Kamar was reportedly asked by Goddess Parvati herself to make 1 crore sculptures to impress Lord Shiva.