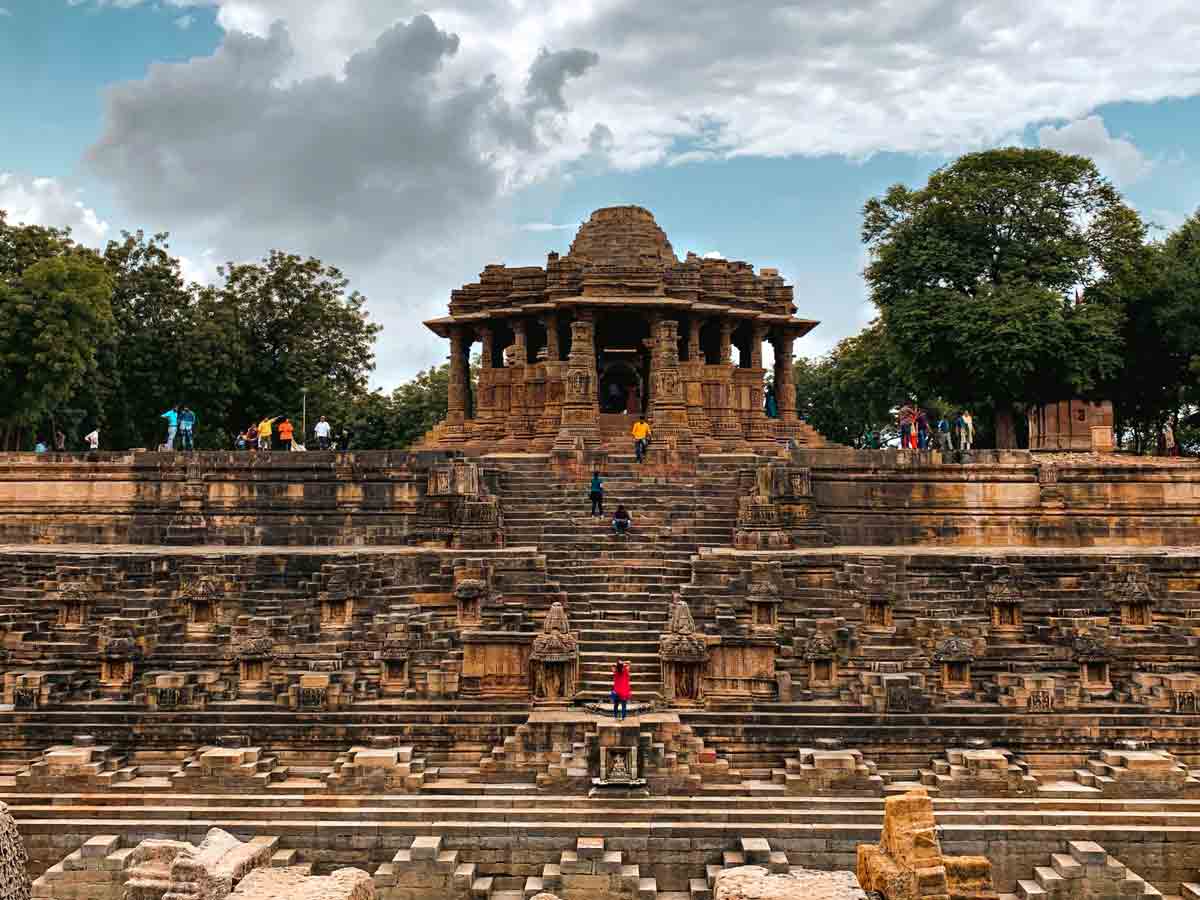 The Sun Temple is a Hindu temple in Modhera village, Mehsana district, Gujarat, India, devoted to the sun deity Surya. It was constructed between 1026 and 1027 CE, under the Chalukyas dynasty’s Bhima I dynasty. There is no longer any worship conducted. The site is now a protected monument managed by the Archaeological Survey of India. Gudhamandapa, the shrine hall; Sabhamandapa, the assembly hall; and Kunda, the reservoir, make up the Sun temple Modhera complex. The façade and pillars of the halls are elaborately carved. There are steps down to the bottom of the reservoir, as well as several tiny shrines. 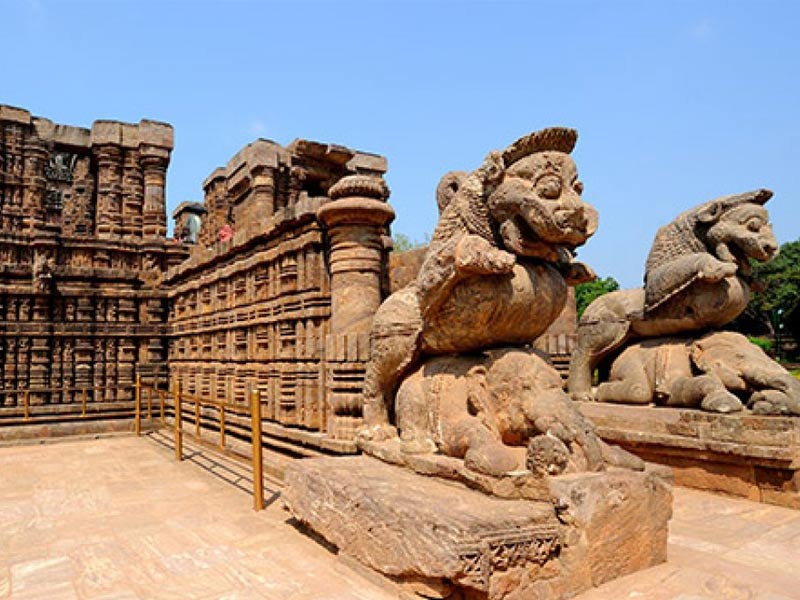 The Mru-Gurjara style is used to construct the Sun temple complex (Chaulukya style). The Sabhamandapa is not a continuation of the Gudhamandapa but rather a distinct building located a short distance away. Both are constructed on a paved surface. Their roofs have long since fallen, leaving just a few lower-most courses. Both roofs have a diameter of 15′ 9″ but are built differently. The platform or plinth is fashioned like an inverted lotus.

Parts of the Sun Temple Modhera- 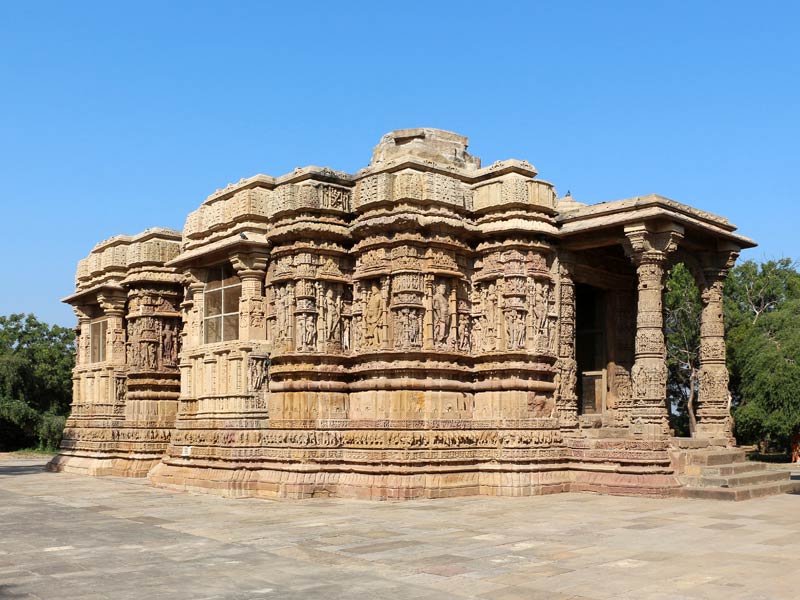 The shrine’s exterior walls are ornately adorned. The shrine and hall’s foundation and walls are separated into numerous lengths, each with its carvings. The Pitha or adhisthana has two square members called Bhat and a cyma recta sculpture on the base. Padma or Padmaka, the molding in the shape of an inverted lotus, comes next. Above this is a Patta with Chhaja (thin molding) on the lower border. The next Chhaja is a linga, which is separated by the neck. The elephant-carved Gajathara is the next broadband, Patti. The next band, narathara, features males in various poses.

The Garbhagriha, or sanctum sanctorum, is a square shrine that measures 11 feet from the interior. The shrine contained two cells, one below the level of the upper cell and the other above it. The floor of the top chamber, which originally contained a deity’s picture, has now collapsed. The image’s seat has fallen into a pit. The lower compartment was most likely utilized as a storage space.

The shrine’s interior walls are simple, but the exterior wall is embellished. Surya, sitting, is depicted in panels around the entryway, surrounded by dancers and loving lovers. The pictures on the door lintel have been entirely obliterated, and all of the figurines have been disfigured.

Also Read, Experience the Serenity and Peace at Bodh Gaya 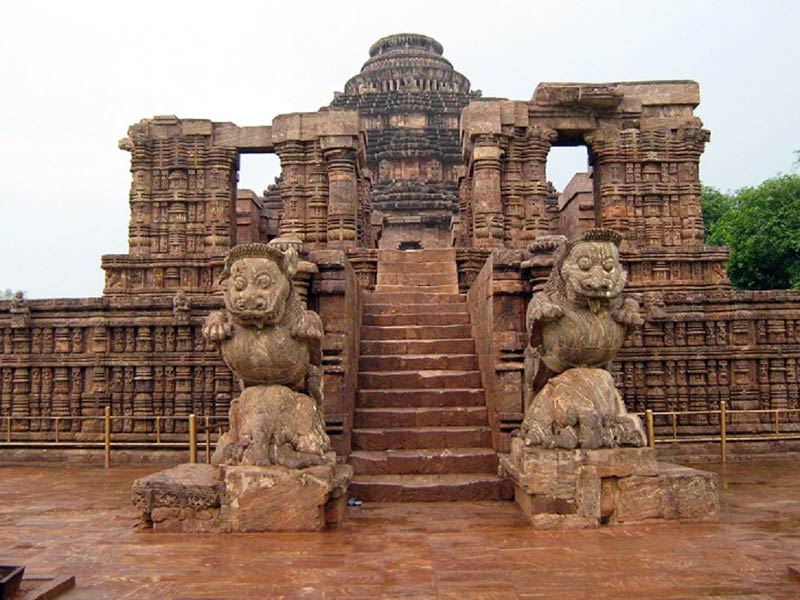 The wall moldings at Mandovara begin with Kumbha, a pitcher. It features a broad undecorated band at the bottom and is decorated with oval discs in the middle. It is followed by a pitcher, Kalasha. Above the primary paneled face of the wall known as Jangha, there is a narrow fillet.

The gods are depicted on these panels, but Surya’s images stand out more than the rest because the temple is dedicated to him. Dancers and other individuals are seen on other panels. Surya’s images are conspicuously carved in three niches in the shrine itself, as well as on either side of three windows in Gudhamandapa’s exterior wall. Surya is shown standing with two arms holding lotuses and being pulled by seven horses. It has a Persian flavor to it. Surya is represented by 12 niches on the walls, one for each month. 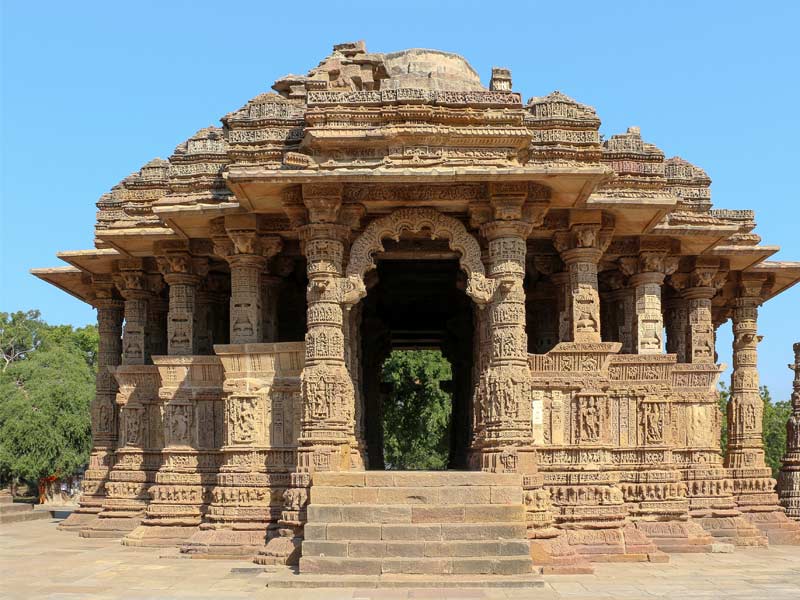 The assembly hall or dance hall, Sabhamandapa or Rangamandapa, is a parallelogram in layout with rows of pillars opening diagonally on each side. The intricately carved exterior features a succession of recessed corners that give it a star-like appearance. There are 52 pillars with exquisite carvings. According to Madhusudan Dhaky, the sabha mandapa may have been added later based on its style and structure. The Pitha is virtually identical to the Gudhamandapa, although it is smaller because of the omission of two fillet stages. Here, the Padma is ornately carved with floral embellishments. 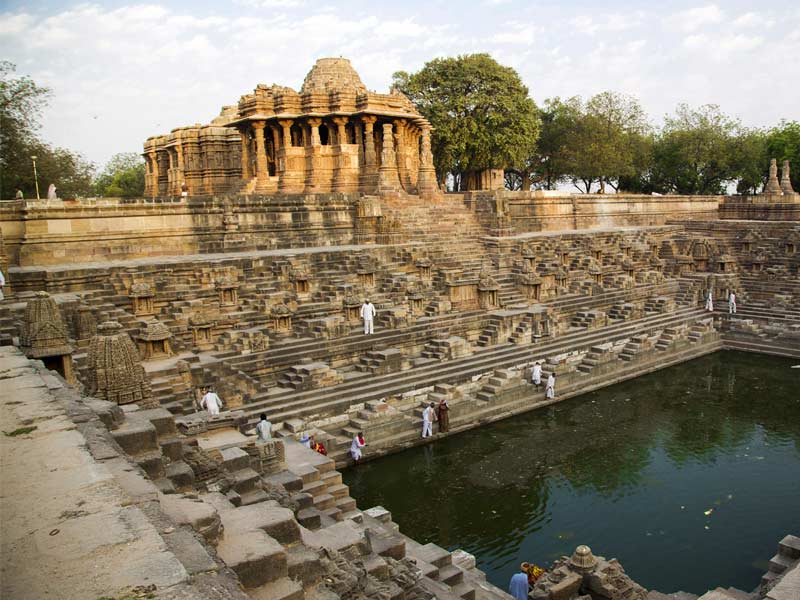 Ramakunda or Suryakunda is the name of a tank or reservoir known as Kunda. The reservoir is reached through a flight of steps through Kirti-Torana. It has a rectangular shape. From north to south, it is 176 feet, and from east to west, it measures 120 feet. It is entirely paved with stones. To get to the bottom of the tank, you must descend four terraces and sunken stairs.

There are steps to get from one terrace to the next on the right angle to the terrace. Except for the first step of each flight of stairs, semicircular, these steps are rectangular or square. Images of gods, including several Vaishnavite deities and goddesses, may be seen in several small shrines and niches in front of the terrace wall.

Sabhamandapa and Gudhamandapa have two types of pillars: short and tall. The roof is supported by the short pillars that rest on the walls. The floor is pierced by towering pillars. 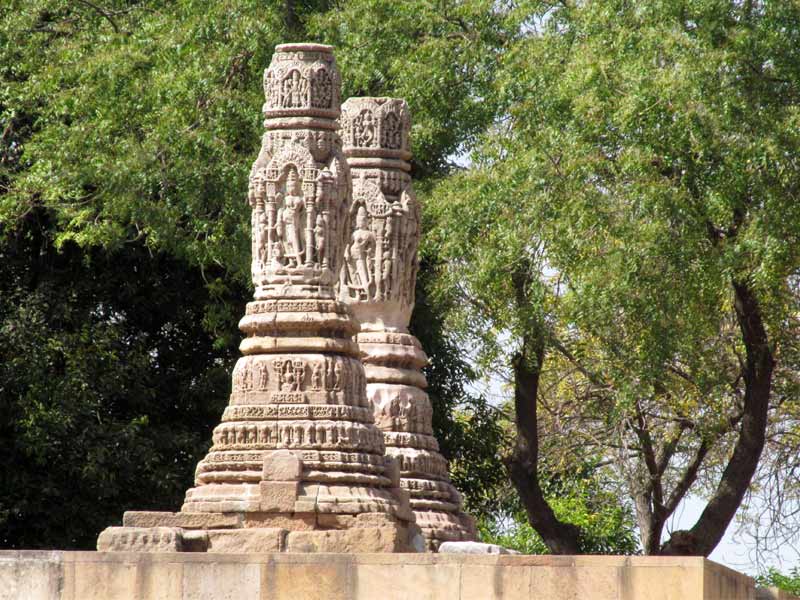 They have a square or octagonal base with triangular decoration on each face, called Kumbhi. It is kalasha that is above it. Following it is a deep band, followed by a Kevala with chaitya windows. On all eight faces, it is originally adorned with standing figures. Usually, dancers, surrounded by ringed pilasters. The circular pillow-like band separates the following band, which has scenes of humans and creatures. A smaller band, with sixteen standing human figures divided by a tiny annulet below, follows. A belt of leaves follows. The shaft then turns circular, with three or four bands, each with a row of male warriors, lozenges, circles, and, finally, Kirtimukha.

The shaft is square for the first half of its height, then the vase, and finally an octagonal shaft. It has a capital and a bracket on top of it. Each side of the face features a flower pattern in a circle on the square portion. The vase’s corners are similarly embellished. The octagonal portion is divided into four bands, the highest of which features kirtimukha. Three annulets adorn the capital.

Also Read, Did you know in-depth about the famous temples? 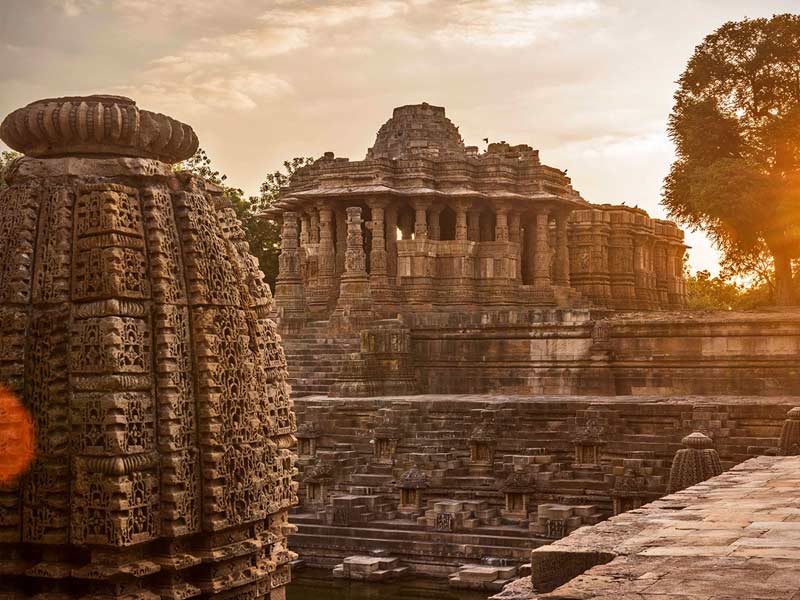 Modhera is a great place to visit if you want to get away from the hustle and bustle of city life for a day. The serene environment and impressively inviting temple complex will transport you from the dull routines of everyday life to the golden periods of the Golden Age.

If you enjoy listening to stories, go for the purohit or priest who has been looking after the temple and remains in the area. Request that he tell or explain the narratives and episodes from epics and legends etched on the 52 pillars that give the temple portion elegance and poise. The Gujarat Tourism Corporation organizes an annual festival of Indian traditional dances at the Sun Temple Modhera. The goal is to portray traditional dance forms in the context in which they were first performed. Every year in January, the festival takes place. 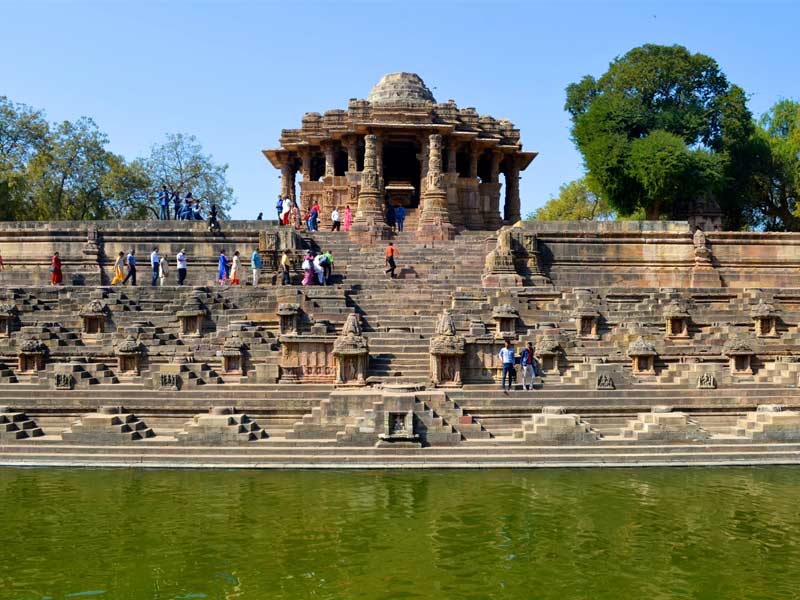 Modhera is a small Gujarati hamlet best known for its Sun Temple Modhera. Though the location may be visited at any time of year, the summers can be hot and humid, while the winters are mild. Modhera is best visited between October and March. This is an excellent time to go sightseeing and participate in other activities.

The summer months of April through June are hot and dry. The maximum temperature is 41 degrees Celsius, while the lowest temperature is approximately 20 degrees Celsius. Despite the heat, visitors flock to the location because of the numerous discounts. From July through September, Modhera is pounded by rains. Come to Modhera if you enjoy monsoons.