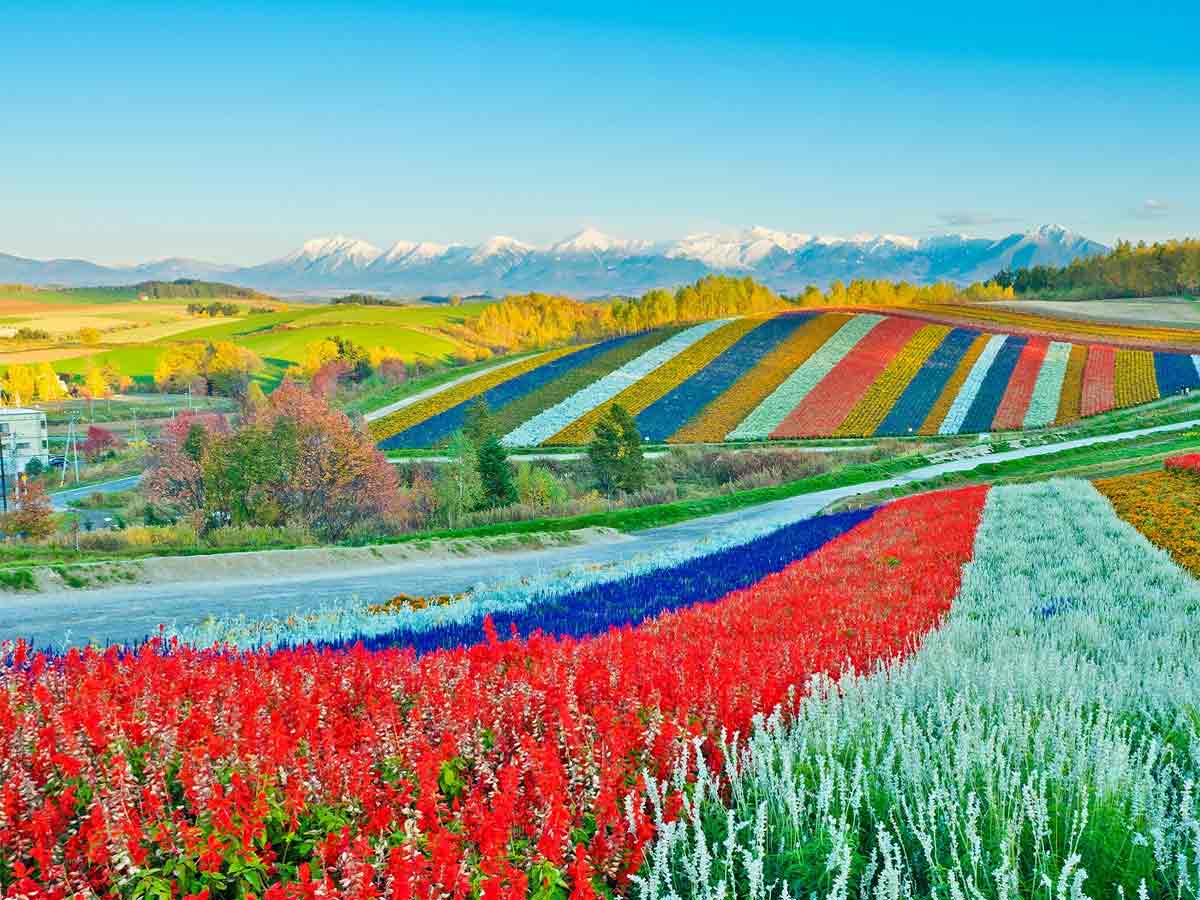 Hokkaido has a distinct history from the rest of Japan. In contrasting contrast to Japan’s mainland, where farming-based cultures flourished initially, Hokkaido retained a hunting and fishing-based society until roughly 2,000 years ago, when it was replaced by Ainu culture.

Before 1869, Wajin (ethnic Japanese) called Hokkaido Ezo. While the Japanese believed Ezo to be within their sphere of influence, and there was a Japanese zone (Wajinchi) near the southern point of Ezo from the 16th century, Ezo was a foreign and distinct land inhabited by Ainu people.

Unlike other parts of Japan, Hokkaido consumes a lot of mutton and lamb. One of Hokkaido’s most well-known dishes is “Genghis Khan,” which consists of lamb and vegetables such as kabocha pumpkin, cabbage, and bean sprouts roasted on a helmet-shaped grill dipped in a special sauce.

Hokkaido has established a reputation as one of Japan’s top tourist destinations. The island is guaranteed to please even the most seasoned traveller, with unspoiled natural views, festivals, historical landmarks, seaside communities, and the best seafood in the country. There are several reasons to visit Hokkaido, but we have selected ten of the greatest.

Hokkaido is home to some of Japan’s most tranquil and magnificent onsen (hot spring) resorts. Locals and visitors travel to the onsen to rest, recharge, and relax, as it is traditionally regarded as a remedy for almost any form of injury or illness.

The mountains here, which hosted the 1972 Winter Olympics, have some of the best ski conditions in the world. It’s no wonder that skiers and snowboarders from all over the world rush to Niseko, Kiroro, and Rusutsu resorts to experience Hokkaido’s best powder snow.

Seasonal festivals in Hokkaido keep things lively all year; from cultural activities to beer festivals, ice sculptures to flower viewing, there is something for every type of traveller here. If you visit in the winter, don’t miss the famed Sapporo Snow Festival, a week-long celebration that includes giant ice sculptures, athletic activities, cuisine tastings, and even a beauty pageant.

Also Read, The Best Japanese Food you Must Try (Apart from Sushi and Ramen)

Hokkaido’s steep topography, lush sceneries, and deep valleys have earned it the title of “ultimate trekking destination.” Several mountain trails will lead hikers across still active volcanoes, which are sure to satisfy adrenaline seekers and explorers.

Markets on the street of Hokkaido

Hokkaido, known as the “Kingdom of Food” among the Japanese, provides the country’s finest seafood, fruit, and dairy goods. Sapporo’s curbside markets allow locals and tourists to shop locally (and at wholesale prices). For guests searching for a quick lunch, various sushi and sashimi eateries are located throughout the marketplaces.

Any meal named for a Mongolian warlord is likely to carry a punch; diners may tuck into a heaping amount of lamb/mutton and veggies roasted on an iron dome skillet. According to legend, the skillet’s shape represents the helmets of Mongolian soldiers. This could be real or false, but that doesn’t make it less wonderful.

Hokkaido has some of Japan’s most impressive parks and world heritage sites, thanks to its abundant wildlife, pure lakes and rivers, and active volcanoes. The island’s largest park, Daisetsuzan, is over 2,300 square meters in size, while the other five national parks include trekking, hot springs, wildlife sanctuaries, and the famous Lake Shikotsu Ice Festival.

Farms in the Community

Hokkaido’s undulating hills, lush vegetation, fresh fruit, and dairy farms are a must-see for those who need some fresh air. Cycling lovers might visit the “Road of Patchwork” in the little village of Biei, a broad field where flowers of alternate colours are planted.

The little fishing towns and port cities that run down Hokkaido’s coast are ideal for couples, families, or anybody looking for a bit of relaxation. Otaru is a charming and comfortable town noted for its local charm and romantic environment.

Unlike other parts of Japan, Hokkaido consumes a lot of mutton and lamb. One of Hokkaido’s most well-known dishes is “Genghis Khan,” which consists of lamb and vegetables such as kabocha pumpkin, cabbage, and bean sprouts roasted on a helmet-shaped grill dipped in a special sauce. Few must-eats are :

Jingisukan has a peculiar odour that perplexes many people who have never tasted lamb before. It’s served similarly to yakiniku (BBQ) dishes around Japan but with more meat (a good thing).

The name is derived from the Mongolian historical figure Genghis Khan. However, it is pronounced differently in Japanese. When sheep were initially transported to Hokkaido in the early 1900s, this meaty meal became popular. During the war, sheep were employed to generate wool for military uniforms and blankets, and they were soon exploited to produce meat.

The Sapporo Beer Garden is one of the most well-known locations for this carnivorous spread, where you can enjoy great lamb on a budget. It’s best washed down with Sapporo’s famed beer.

Soup and curry in one dish? The fusion may appear to be a step too far, but it’s not the horrific combination of tomato soup and green curry you’re envisioning.

Consider a thin, curry-flavoured soup prepared to your liking, full of chicken and vegetables, and ideal for slurping on cold winter nights. Common ingredients include lotus root, eggplant, and carrots.

In Sapporo, Ajanta Indian Curry (Ajanta Indo Kari Ten) delivers an authentic meal that symbolizes the Japanese-Indian mix. The soup is a little thinner than at other restaurants, but it has a very rich flavour usually derived from beef stock. Green peppers are an excellent complement.

This eatery is well-liked by locals, so you know it’s authentic. You’ll come upon it.

Because of the chilly temperature of Hokkaido, local fisheries can keep and prepare a fresher product than in Japan’s warmer locations.

Many Japanese individuals believe Hokkaido’s 100 sushi bars are better than their more pricey counterparts abroad. Because of the availability of wonderful fish, superb sushi is available practically anywhere in the prefecture!

Ikameshi is a speciality from Hokkaido’s Oshima Peninsula. As you might expect from the name, which translates as “squid rice,” the dish consists of the insides of a squid that has been stuffed with rice and roasted. It began during the Second World War when rice was in short supply.

The Japanese cow monopoly has generated a beautiful atmosphere around Hokkaido’s dairy industry. After visiting other parts of Japan, try the milk, butter, yoghurt, and cheese in Hokkaido to see how high-quality their products are, and other prefectures are not even close.

The characteristic ramen dish, appropriately named Hokkaido Butter Ramen, is one of the more intriguing uses of Hokkaido’s dairy. The miso-flavoured soup is topped with a pat of locally produced butter, which gives it a distinct, creamy flavour. There’s no getting away from the regional bowl, available in practically every ramen shop in the prefecture and even as an instant noodle cup.

While ramen is the most well-known product of Hokkaido’s wonderful dairy, the actual star is the native ice cream. It’s among the most coveted in the country, and Furano city’s lavender-flavoured soft serve is a popular variation of this milky delight.

With Hokkaido’s cuisine fame, you’d think they’d worship the land from whence the food is grown. They do, and one such object of adoration is Yubari King Melon.

Hokkaido Yubari King Melon at Japan’s Hakodate Market! For $5,800, this had better be the best melon!

Melons that are pleasant to the eye are usually completely round. Elite, god-level melons have sold for roughly $5 million, demonstrating how dedicated people are to this fruit’s messiah.  Of course, you can purchase much cheaper ones at the grocery, with the same smooth inside coated by a soft rind.

Melon Terrace, where you can have a buffet course with gorgeous mountains views around the named melon location, is one of the more interesting venues to eat such fruit.