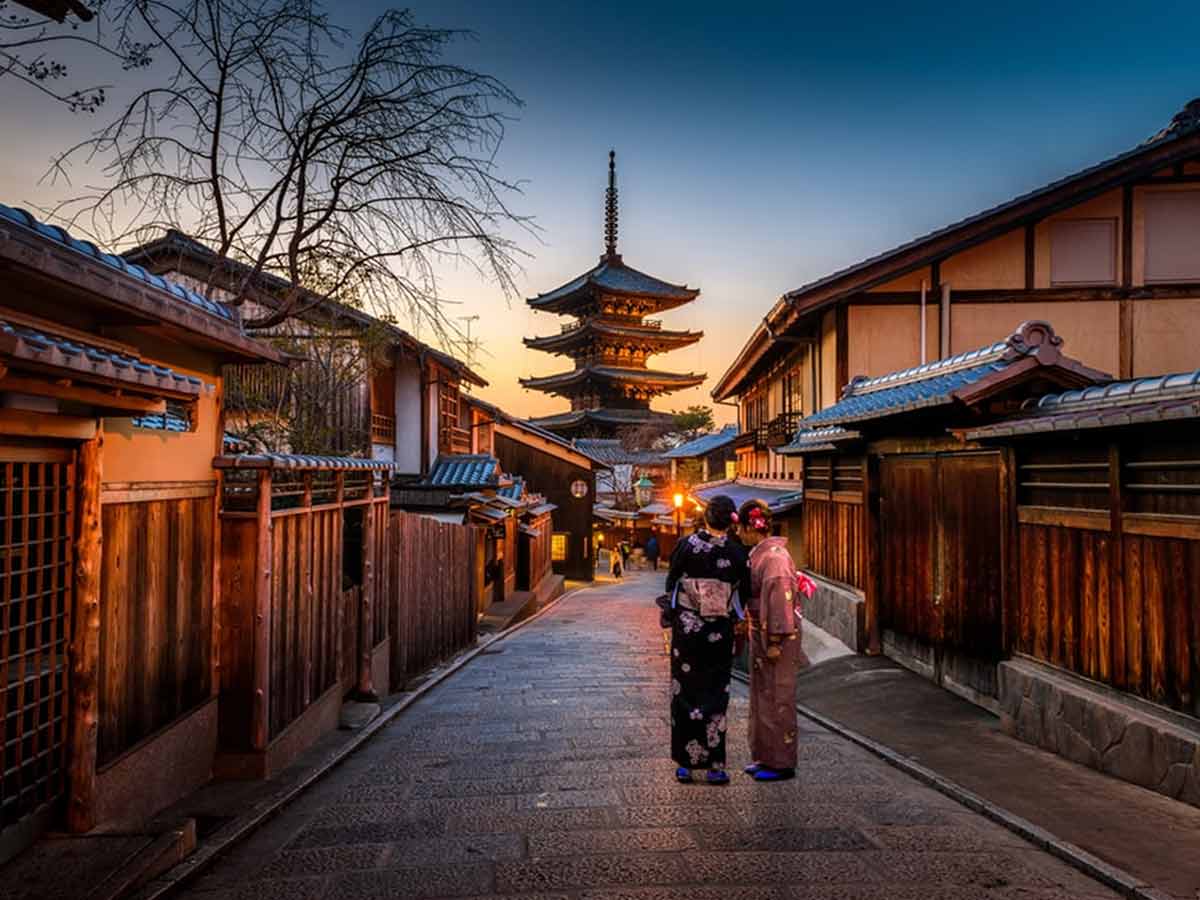 The spiritual heart of Japan and once the capital of it, Kyoto is a city of some 2000 temples and shrines. Kyoto, in Japan, is a masterpiece in its genuine sense of religious architecture. No matter how much modernization buzzes in the city, a waft burning of incense sticks and its sweet aroma remind that the roots of Kyoto are still connected to its spiritualism and hence, it is still the spiritual heart of Japan. The old ways are still clinging in this city and it is alive in the great traditional art and craft of artisans. And how can we forget about the great manga, the comic culture of Japan which can also be found in Kyoto’s atmosphere?

However, over the centuries,

Kyoto has suffered great destruction because of several wars and fires, but never lost its beauty and exceptional historic value. If you are also crazy to know more about Japan’s culture and tradition, then this spiritual heart of Japan, Kyoto, can be the perfect destination to pay a visit. And, here is an ultimate guide to Kyoto, so keep scrolling!

TOP ATTRACTIONS AND ACTIVITIES IN KYOTO

Nijo Castle is one must-visits in Kyoto and was built in the year 1603, and served as the residence of Tokugawa Ieyasu, the first shogun of the Edo Period. Once the Tokugawa fell in the year 1867, this castle was used as an imperial palace and then was donated to the city and is now opened for the visitors as a historic site. In the year 1994, this castle has been included in the list of UNESCO world heritage sites. Its splendid architecture is the major attraction of so many tourists and reflects traditional Japanese culture and history.

Strolling through the soaring bamboo stalks in the dense forests of Bamboo is a heaven-like experience to witness in Tokyo. The shadows of the first morning light are incredibly beautiful and to watch them gives the utmost pleasure and serenity. It is one of the iconic spots in Kyoto and while visiting it, don’t forget to carry your cameras with you for some Instagramable pictures.

Also Read, Beaches In Japan: The best they have to Offer!

How can you not feel the spirituality while being in the spiritual heart of the country. You can best feel it at Fushimi Inari Shrine. This beautiful shrine with thousands of orange torii gates snaking up the Inari Mountain makes it a great icon of the city. This beautiful and spiritual shrine is dedicated to Inari, the god of rice and the patron of merchants and business as per the culture of Japan. Those who want to get their wishes fulfilled make a donation here and a tori gate is erected in their name.

Stroll the path of philosophy

How can one miss strolling the path of philosophy while being in Kyoto? It is an incredibly beautiful route along the canal. The path is named after a great Japanese philosopher who used to practice meditation on his regular walks along the canal. It is one of the most stunning and picturesque spots in the city of Kyoto. And its beauty is really very mesmerizing during the season of cherry blossom. However, a lush green environment and a colorful backdrop are maintained throughout the year.

How can one miss spotting Geisha while being in Kyoto? And Gion is the Geisha capital of Japan. It is an entertainment district dotted with traditional Japanese teahouses and restaurants. This place is considered the birthplace of the culture of the geisha. It is frequently possible to see a geisha hurrying along the streets between engagements. But yes! Don’t get confused with the visitors who are dressed as Geisha as this activity is largely offered by many studios in Kyoto.

Offer your prayers at Shorenin Temple

Shorenin Temple is one of the monzeki temples, a temple whose head priest was traditionally a member of the Imperial Family of Japan. The premises of this temple instill serenity, tranquillity, and peace. One of the major highlights of this temple involves the three gardens of the temple. The temple offers positive and peaceful vibes for its devotees.

This amazing palace in Kyoto was once the residence of the ruling family of Japan up to the mid of a 19th century before they moved to the Imperial Palace of Tokyo. The architecture, beauty, and grandeur of the palace are really mesmerizing and hence it attracts several tourists.

Eat the mouth-watery delicacies in Kyoto

Visiting Kyoto without tasting the wide range of special delicacies of Japan is not fair, right? And for this, Kyoto is one of the best places offering amazing mouth-watering traditional Japanese cuisines. Here, to experience the perfect traditional Japanese flavor, you can try visiting the renowned Nishiki Food Market. In the market, you can find some super amazing stalls serving their delicacies and that too in several varieties. From Japanese knives to roasted chestnuts, you can find ample cuisines here in the market. So, try the delicacies in Kyoto.