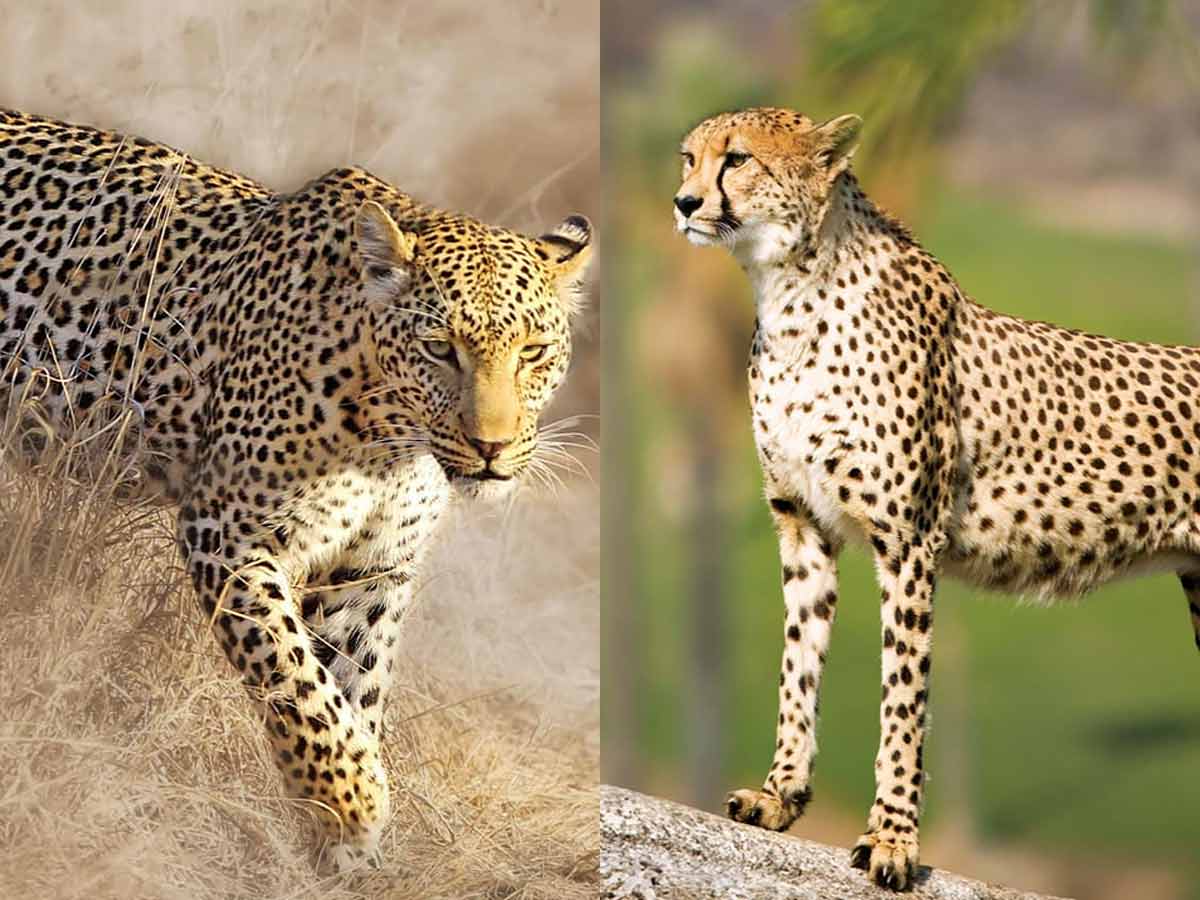 Although cheetahs and leopards can seem identical at first sight, they are, in fact, two very different cats.

The following guide outlines the main distinctions between leopards and cheetahs, so the next time you go on safari, you’ll be able to tell the two cats apart like a pro. Some distinctions, such as body form, behavior, or habitat, will help you see the difference from a distance. In contrast, others, such as marks and claws, will need you to come a little closer.

So, here’s our guide to the cheetah vs leopard debate – you’ll know which one you’re looking at in no time: 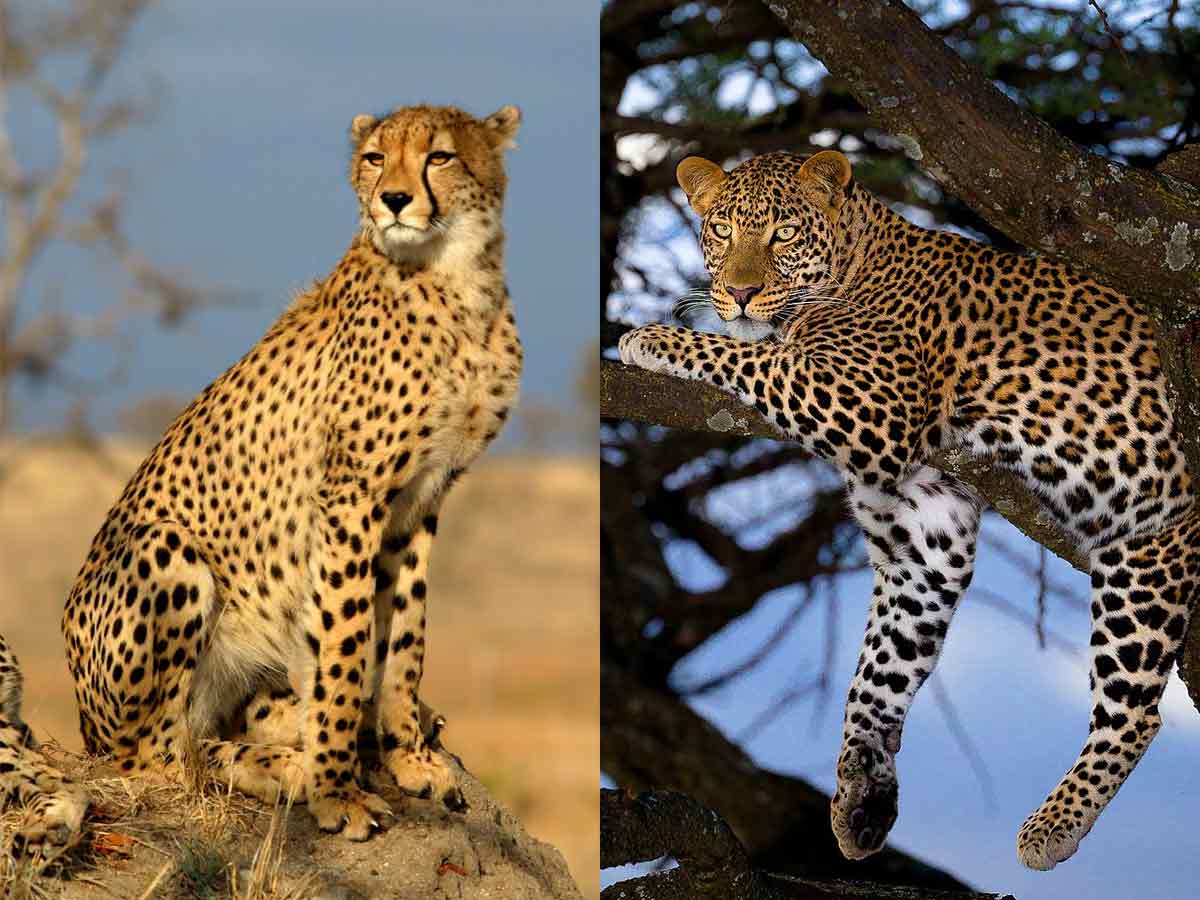 Cheetahs are larger at the shoulders and stand higher off the ground than leopards, but they are much more compact species. Weighing up to 72 kg, much of their muscle has been lost to make them sleek. A body shape optimized for agility evolved to help them become the fastest land mammal, achieving a maximum speed of 120 km per hour.

Their aerodynamic build consists of extremely long bodies with an exceptionally flexible spine to allow quick changes of direction, a short, rounded head. A high chest with a narrow waist and exposed shoulder blades.

Leopards are the smallest of the large cats, but they are bulkier and stronger than cheetahs (weighing up to 100 kg). Leopards are much stronger animals than cheetahs, stalking and ambushing prey and then carrying their kill up the trees to cover their dinner.

Because of the power disparity between the two animals, a leopard will scare away any cheetah that threatens its territories in the wild. 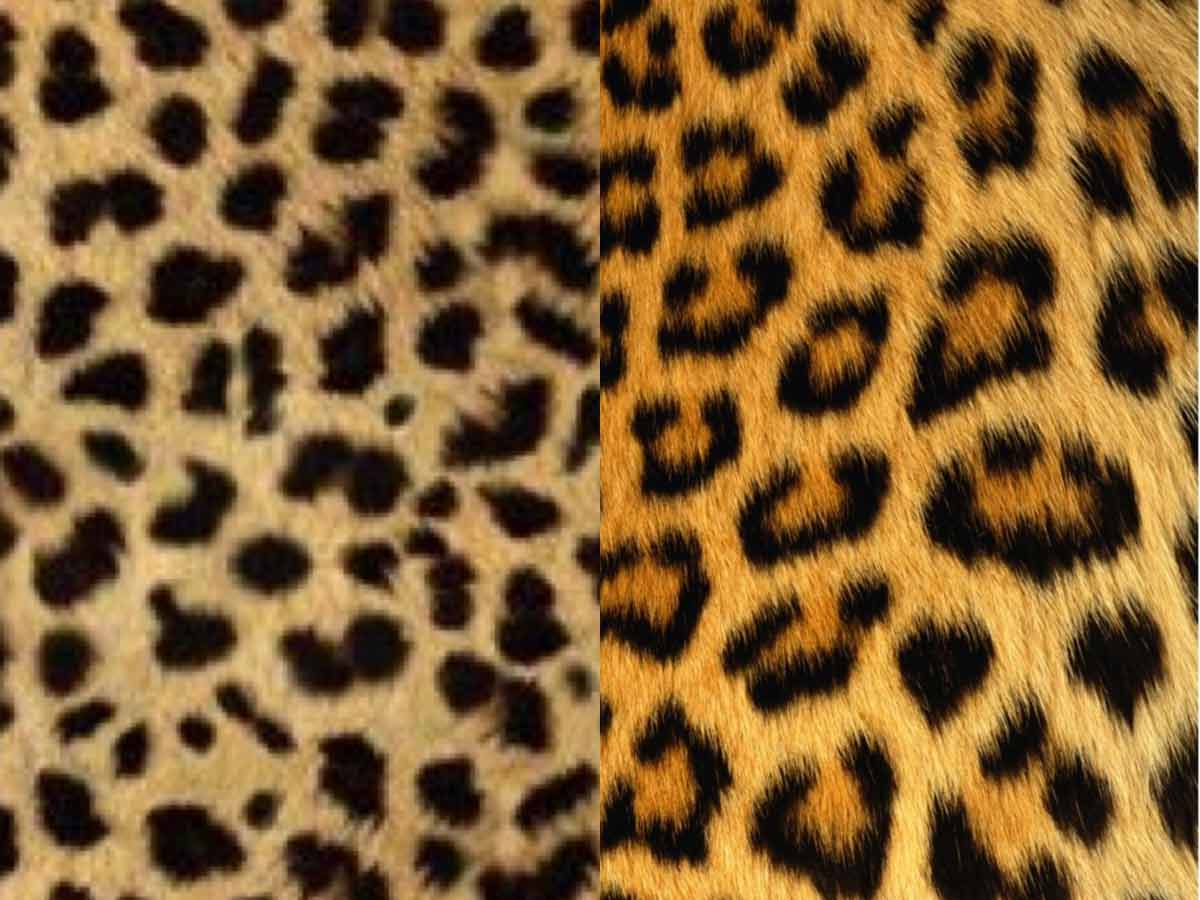 Leopard print vs cheetah print might be the fashionista’s way of telling the difference between cheetah and leopard. Still, the coat pattern is unmistakable if you know what you’re looking for.

At first sight, both cats seem to have black streaks on their yellow coats, but closer inspection reveals:

In both cases, the cat’s spots are used to make it blend in with other species, allowing it to get close to its prey before attacking. 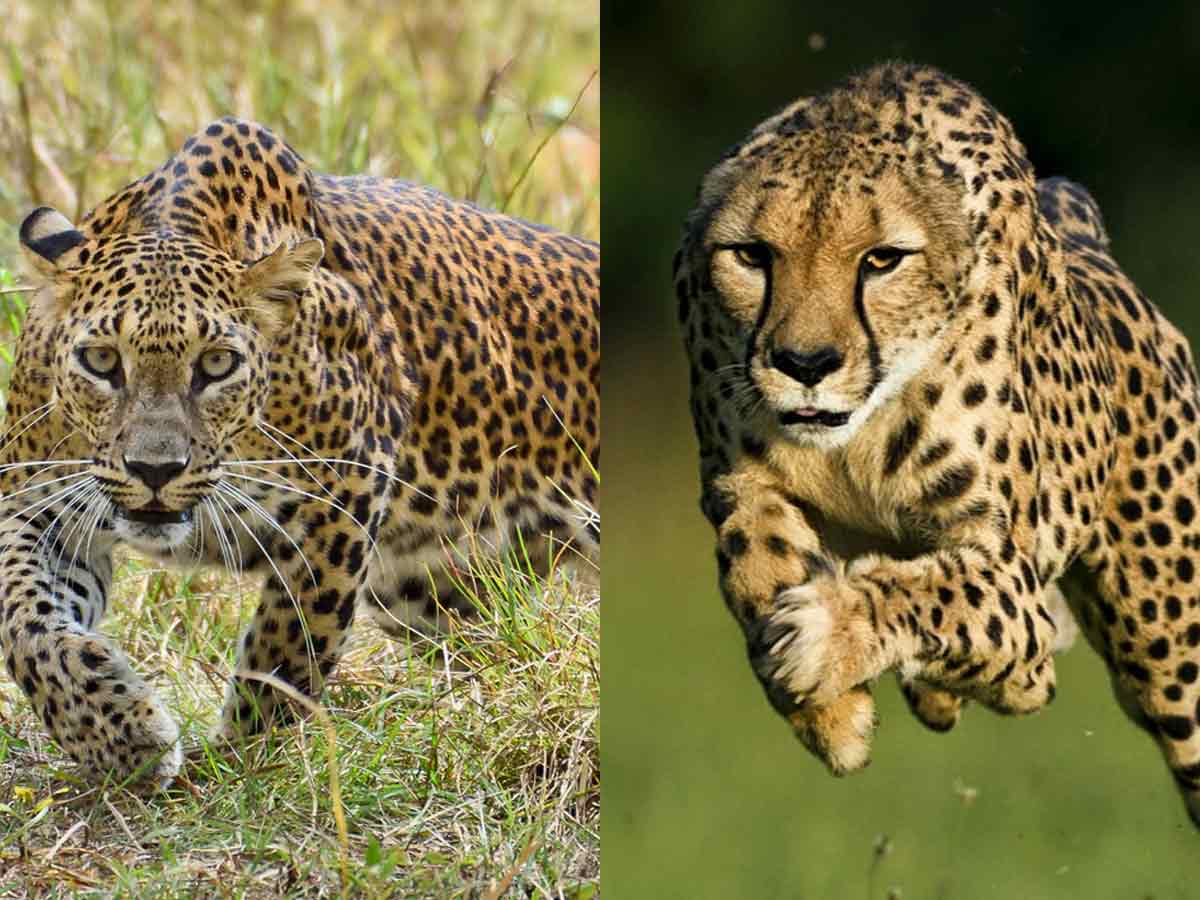 The stripes on their faces distinguish a cheetah from a leopard if you get close enough.

Although a leopard’s face is shrouded in continuation of their rosette pattern, cheetahs are distinguished by a black ‘tear line’ that runs from the inner corner of their eyes down to the sides of their mouths. According to one hypothesis, these tear marks trap sunshine and minimize reflection in the cheetah’s eyes when hunting.

Another distinguishing feature of the face is the color of the eyes. Cheetahs have amber eyes, while leopards’ eyes can range from light blue to bright orange. 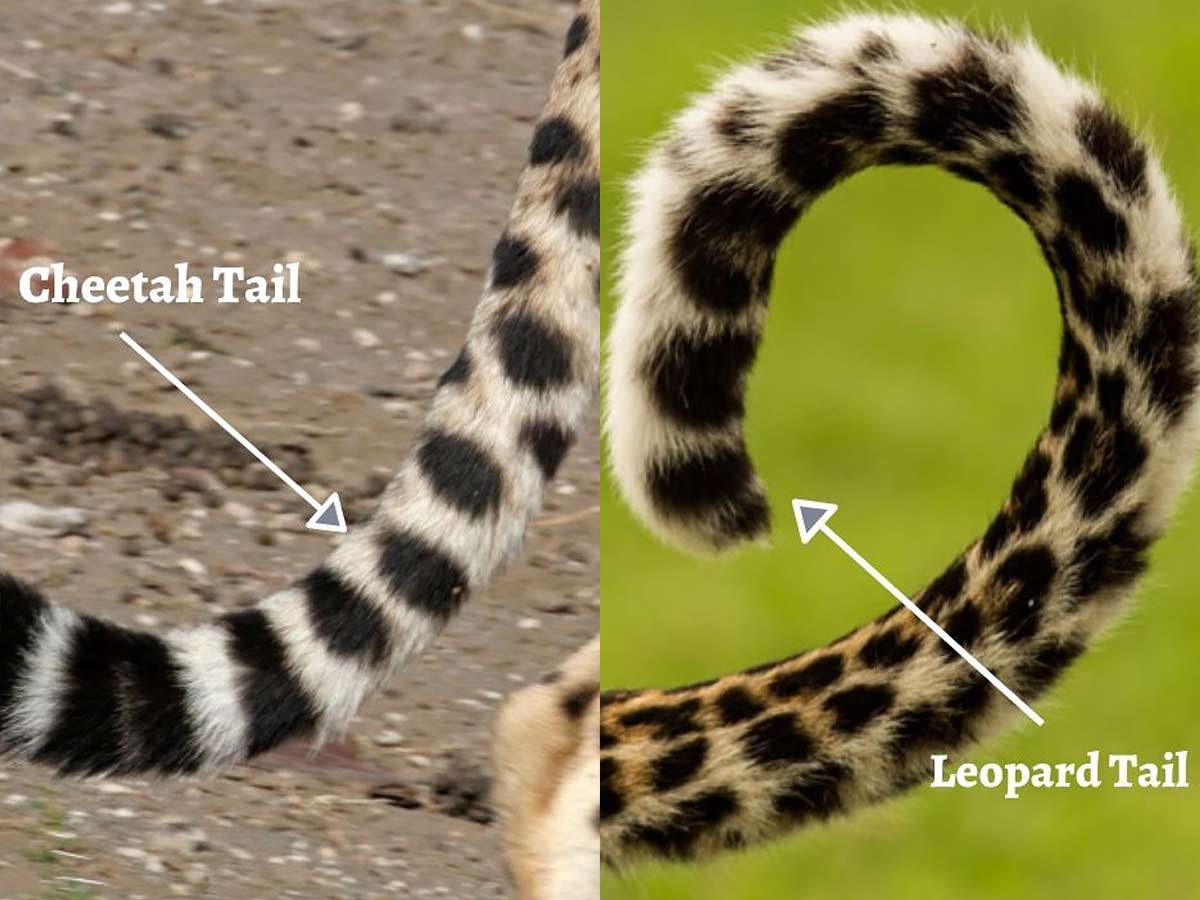 Cheetah tails have a smooth and wide look. Cheetahs use their rudder-like tails as a counterbalance to help them change course rapidly when pursuing prey at high speeds.

Leopard tails have a tubular appearance. Leopards use their tails to balance themselves, particularly while walking in trees or dragging kills up trees.

Cheetah vs Leopard – Claws and feet 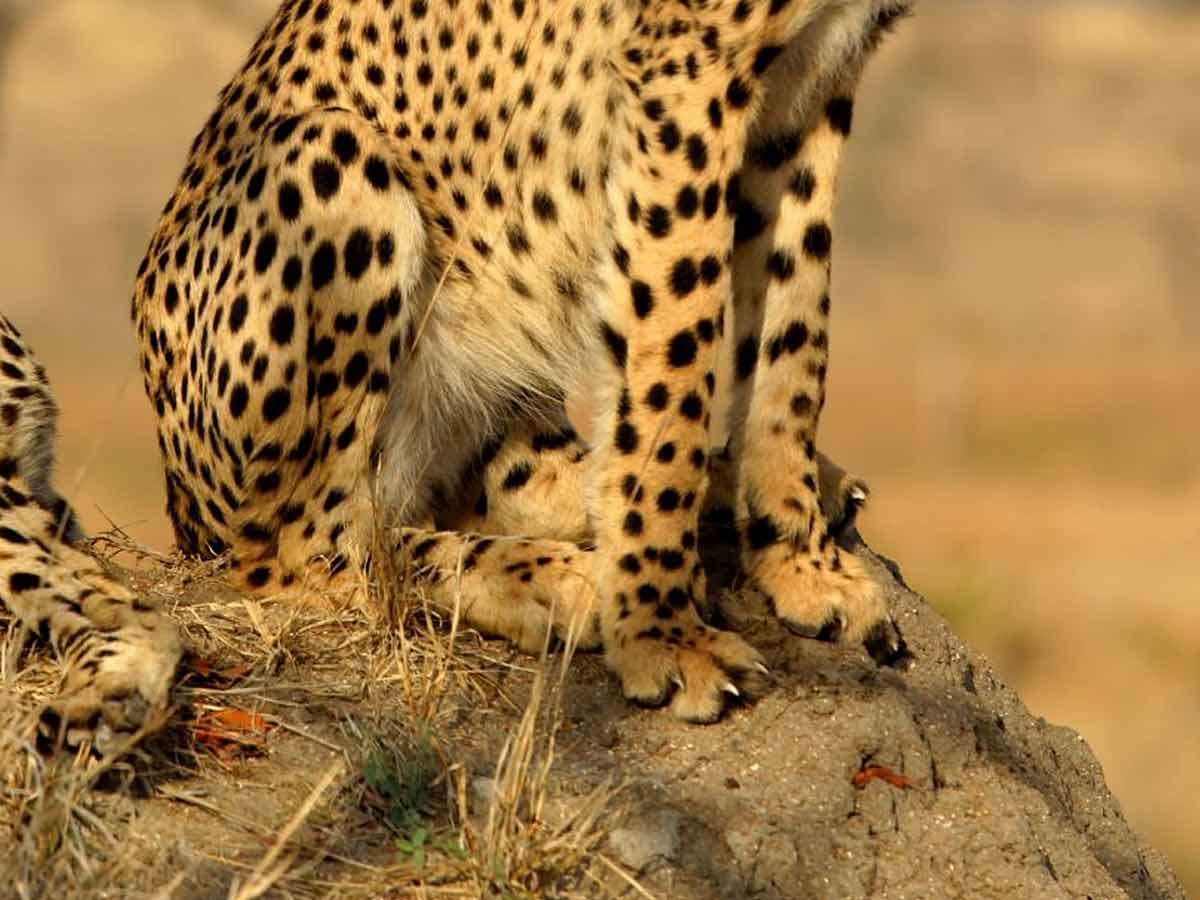 Leopards have wider front feet than back feet to protect their massive and bulky forequarters, which aid in hoisting carcasses up trees. Like nearly all cats, Leopards have retractable claws that they only use as necessary – climbing trees, fighting, or pouncing on prey.

On the other hand, Cheetahs require explosive speed and have big back feet that aid in their massive acceleration. Another adaptation for acceleration and spinning at high speeds is that cheetahs’ paws are only partially retractable, allowing them extra traction.

The distinction in paws and claws between cheetah and leopard tracks is obvious.

The classification of cheetahs as large or medium-sized cats is a point of contention. According to one school of thought, big cats are characterized by their tendency to scream. Jaguars, leopards, lions, and tigers all have an evolved larynx and a special section of the throat known as a hyoid apparatus that allows them to emit a deep, noisy roaring sound.

Unlike leopards, who can growl and scream, cheetahs can only purr:

While all cats can be seen in overlapping terrain, the cheetah and leopard prefer relatively separate areas due to their different hunting behavior.

Cheetahs use vast open spaces to complete a high-speed hunt, commonly found in grasslands and savannas. On the other hand, Leopards hunt by stalking and camouflage because they prefer deeper brush and heavily covered areas such as wetlands, woodlands, and scrub, where they can conceal more easily.

Leopards often spend even more time in trees than cheetahs, often lounging and resting in a tree all day before going out to hunt at night. For instance, leopards like to take any kill up into a tree to eat at their convenience, away from the possibility of hyenas or lions stealing it.

Although cheetahs can climb trees and are often seen off the ground on fallen trees or termite mounds searching for food and predators, they are not as at ease in trees as leopards and are not large enough to hoist a kill into a tree.

Cheetah vs Leopard – Behavior while hunting

Leopards are nocturnal animals, which means they are more aggressive – and hunt more often – at night. They have many light-sensitive cells in their eyes to sense movement and form in the dark and large pupils to maximize light absorption.

Cheetahs are diurnal, which means they prey mainly during the day. Having said that, cheetahs are often seen hunted by the light of a full moon, and leopards can hunt through the day if the opportunity arises.

Leopards are hunters that hunt and pounce. They spend a lot of time crouching low to the ground, sneaking up on their quarry, hoping to get near enough to jump on it and kill it by accident.

Cheetahs hunt off their prey at fast speeds, tripping them with a swipe at their hind legs rather than jumping on them.

Cheetahs normally drag their prey across the land to a secluded or covered location after killing it. They feed quickly because they lack the stamina to fend off bigger predators like lions and hyenas, who would attempt to take their kill. On the other hand, Leopards use their bulky bodies to pull their prey over the ground and up into a tree, where they can feed at their leisure while being hidden from other predators.

Which is bigger, the cheetah or the leopard?

Despite being the smaller of the two cats, Leopards are also larger creatures – more muscular and tougher than cheetahs.

Is it possible for a cheetah to kill a leopard?

Can a cheetah and a leopard have a relationship?

A brief description of the leopard:

Leap is the name of the group.

Leopards live in more habitats than any other large cat. They are at home in almost any setting, including deserts, rainforests, woodlands, grassland savannas, mountains, scrub, and swamps. Leopards are one of the few large game animals that can be found outside of national parks.

A brief description of the cheetah:

The coalition is the name of the group.

The cheetah is the world’s fastest land mammal, reaching speeds of 92 kilometers per hour.

Cheetahs stalk small to medium-sized animals, including hares, impalas, wildebeest calves, and gazelles, either alone or in small family groups.

Cheetahs are present in Eastern and Southern Africa (though they are also found in Iran and Afghanistan). They are primarily restricted to very limited, scattered areas of savannahs, dry and scrub forests, and grasslands.