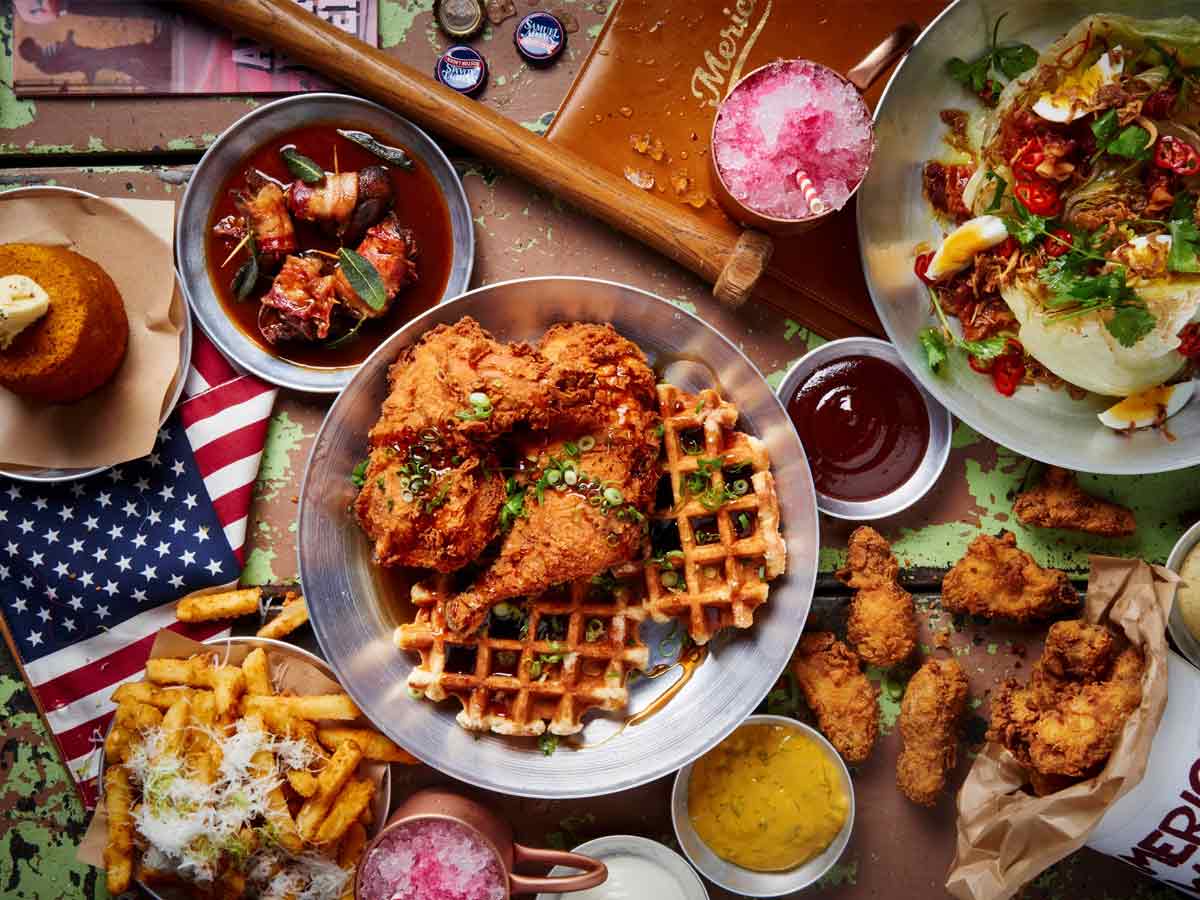 Over the last century, the United States has gone from being revered for having one of the best food cultures in the world — American cuisine so delectably unique that wealthy Europeans would travel to America for retreat simply to enjoy the delightful food — to being the focus of international ridicule for having a food culture monopolized by junk foods, fast foods, and processed frozen meals. Anyone up for some string cheese and SPAM?

We’ll dine at world-famous American restaurants from the 1890s before marching through the Great Depression to explore how it influenced American cuisine. We’ll discover how World War II drastically altered American eating patterns, and then we’ll ride in a wonky-wheeled shopping cart through the 1950s “dark ages” of American food, complete with huge supermarkets selling frozen TV meals and Jell-O salads.

We’ll look at the key “innovations” made by processed food producers in order to dominate the American home table. In the end, we’ll discover that what Americans ate over the decades had a significant influence on American society, culture, and family time. “You are what you eat,” as the adage goes. Can what Americans eat tell us anything about who they are as a country?

EVERYTHING YOU NEED TO KNOW ABOUT AMERICAN CUISINE’S HISTORY

This blog will analyze the history of American cuisine since 1945, focusing on a few significant events that drastically altered how and what Americans ate. Over the last 70 years, the country has transitioned from a relatively nutritious and nourishing food system to what critics could refer to as a “Cheez-Whiz food culture,” loaded with fats, sugar, and ultra-processed unhealthy foods. Diet-related factors are now responsible for six out of every 10 fatalities in the United States. Even Duke University’s Dean of Public Policy has stated that Americans are now living in a “toxic food environment.”

How did this happen? Is it truly that bad? We’ll look at how a couple of crises — the 1967-68 racial riots and the early 1970s economic issues — prompted measures that assisted solve these problems but resulted in a drastic shift in what Americans ate. Between 1967 and 1999, fast food expenditure increased from 14.3 percent of total eating out receipts to 35.5 percent as the government collaborated with big food businesses to flood the market with cheaper, quicker, more highly processed (and harmful) meals.

For decades, suspicious foreigners—including millions of Americans—thought there was no such thing as American cuisine. Burgers, hot dogs, and pizza have been believed to characterise the American palate in recent decades. That is not the case, according to culinary historian Paul Freedman, who argues that there is a vibrant and diverse, if not always cohesive, American cuisine that represents the nation’s past.

From the colonial period through the Civil War, there was a patchwork of regional culinary traditions that created regional standouts like gumbo from southern Louisiana or clam chowder from New England. Later, this sort of regional identity was twisted for historical purpose, such as in Southern cookbooks that mythologized generous “plantation hospitality,” making the African Americans who invented most of the region’s food invisible.

As the industrial revolution brought about fast changes in many aspects of life, the American taste moved significantly from local to processed.

The age of homogenised American cuisine was well underway by the early twentieth century. Food businesses convinced customers that industrial food tasted good and, more significantly, was convenient and healthy, with the help of nutrition “experts,” marketing consultants, and advertising executives. No group was more vulnerable to advertisements than women, who were led to believe that if their husbands were not happy with the meals supplied at home, they would wander.

The 1970s saw the peak of processed-food hegemony, but also the start of a food revolution in California. The blandness of standardised food was rejected in favour of the genuine taste and enjoyment offered by seasonal, locally grown ingredients, which became known as New American cuisine.

Americans, like the rest of the world, are passionate about food, but historians like Freedman argue they share some important culinary qualities that are distinctively American and we’re not talking about deep frying everything. Fast food will always be an American icon, even if they eat less of it these days, but we’re more than McDonald’s and cheese in-a-can, and we’ve even exported some distinctly American eating habits. France, you are correct. You’ve also picked up a few tips from us.

Let’s look at five significant events in the history of America’s eating habits to see what they all have in common.

Back in the day, sugar was healthful.

People consumed things that filled them full until the late 1800s. Dairy, beef, hominy, oatmeal, and sugar were all mainstays; vegetables were not. Vitamins were not completely recognised until the twentieth century.

Food journeys around the country

Black chefs have been a part of our cuisine from its inception. Their influence was so pervasive from south to north that its significance was long underestimated.

The story of ice cream is only one example. Thomas Jefferson’s enslaved chef, James Hemings, travelled to France with the family, learned how to make ice cream, and brought it back to the US along with copper cookware, European-style mac ‘n’ cheese, and French fries. Then, in the late nineteenth century, it’s New England’s satisfying, but somewhat monotonous, food that comes to the fore.

Scientific concepts about food have always existed, but in the late 1800s, individuals stressed unseen aspects of food learning, such as avoiding illnesses like scurvy, beriberi, and pellagra. Vegetables became increasingly essential, although after being cooked for extended periods of time.

A woman’s kitchen became her laboratory, and her cookbooks served as her textbooks. What was considered “nutrition” was extremely essential, but women couldn’t or didn’t want to learn how to cook from their mothers.

That’s a lot of strain on your meatloaf. Fortunately, Americans received help even when they did not deserve it.

When Americans are given something they do not deserve,

Immigration, migration, and industrial variety are where America and American Cuisine truly establish eating patterns that distinguish us from other countries. While immigration occurs in every country, it occurred on a massive scale and very early in America.

The Eastern Europeans contributed their fondness of sour dishes, while the Italians added their love of garlic. When they arrived in America, their cuisine developed, with Italians preferring delicacies like olive oil and aged cheeses. Back in Italy, they were only available as pricey exports, but in the United States, Italians could buy them and used them extensively.

That is also true for Chinese food, which spread slowly across the country at the same time that prejudice against Chinese people grew. Kevin Kim studies the history of Chinese people in the Deep South and is now working on a project for the Smithsonian Anacostia Community Museum about the ongoing displacement of urban immigrant communities.

The Chinese Exclusion Act of 1882 should keep away Chinese labourers who immigrated to the United States in search of many jobs, although it included exceptions. Merchants who owned shops and grocery stores were excluded, and subsequently, restaurant owners were as well. From the early nineteenth century until the mid-twentieth century, the number of Chinese restaurants more than doubled.

Another explosion occurs when immigration is opened up in 1965, attracting individuals from all around Asia. While immigration infiltrated American cuisine, greater diversity emerged as American industry sped up into a new age.

Processed goods, such as cake mixes and powdered eggs, existed prior to the Great Conflicts, but they reached new heights after the wars ended. Canned and frozen goods that fed troops en masse were still being manufactured at breakneck pace, and producers sought to find a new market for them.

As a result, businesses concentrated their efforts on women at home. Grocery shops will play: their product needs a lot of work and most of it is thrown away, unlike those rows and aisles of canned tomatoes.

The current state of American cuisine

We now eat a wide variety of foods, both processed and fresh, both familiar and unusual. As shown by the immense popularity of food television, food magazines, food museums, and food exhibitions, Americans adore it all. These are global phenomena.