Home Life Travel Feel lost in History, in the Historical town of Hampi 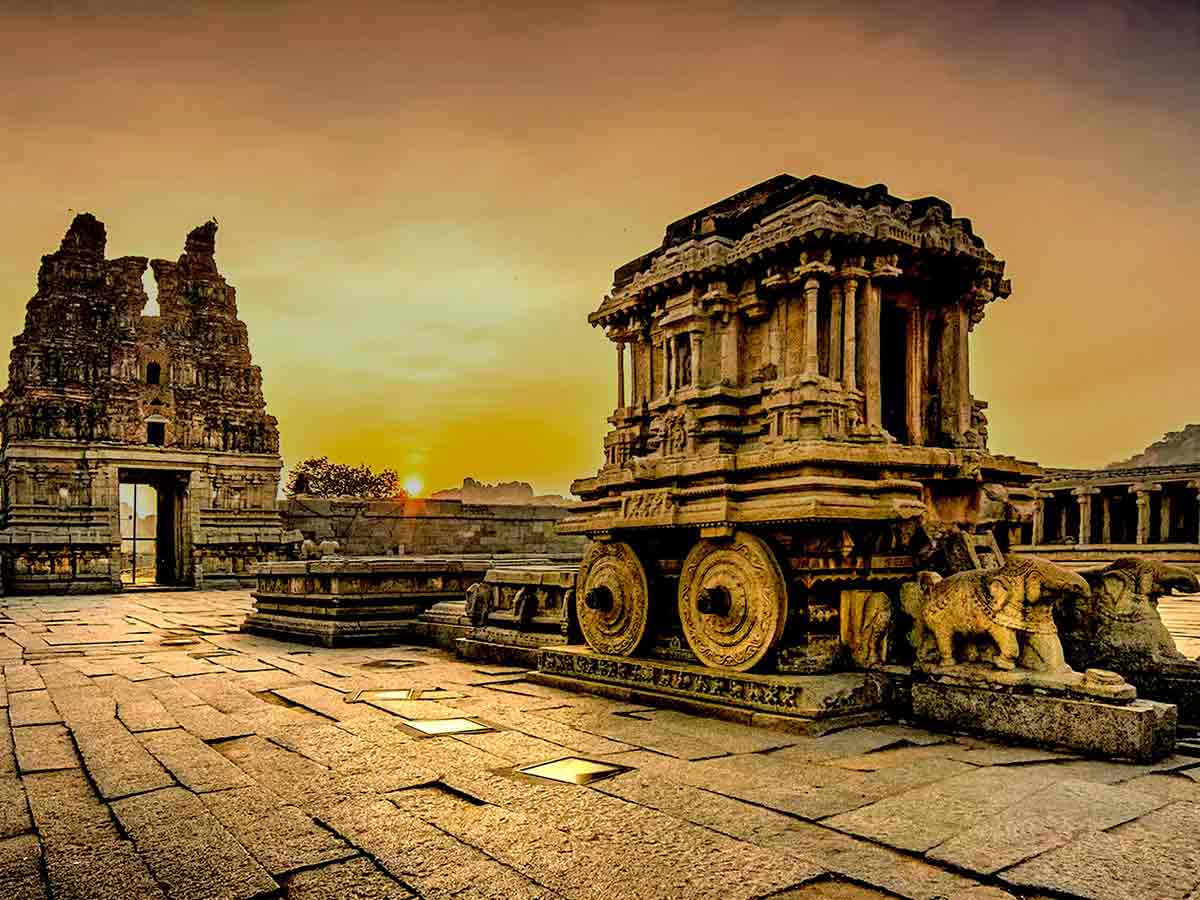 For a long time, Hampi has been on our bucket list. The location has everything that could entice us to visit there – the narrative of a lost kingdom, architectural marvels from our past to brag about, and a rough yet appealing environment. Hampi is a UNESCO World Heritage site was an extra bonus. So, when we visited Karnataka this year, we had to include Hampi in our itinerary.

Where can I find the historical city of Hampi? 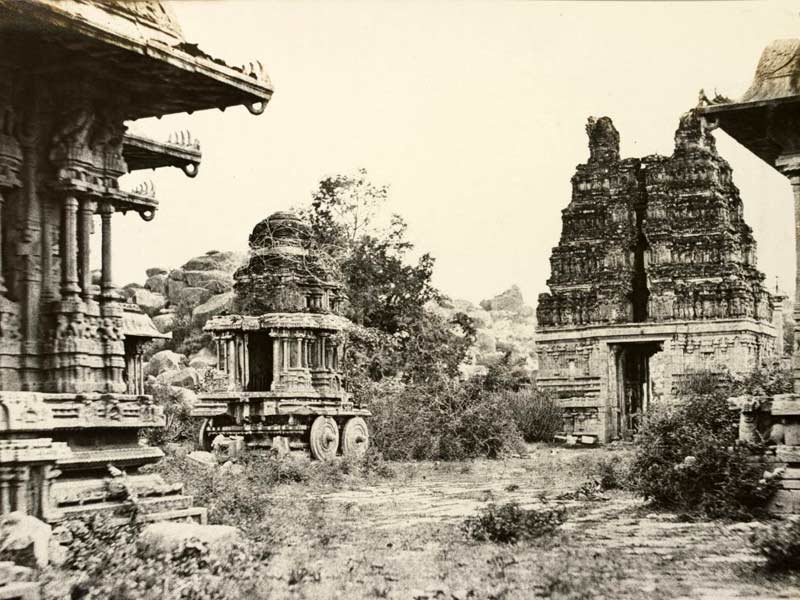 What is Hampi’s History?

Hampi is rich in stories — both historical and legendary ones. In reality, the place’s history progressively mingles with folklore and finally merges with mythology.

Pampa Kshetra and Kiskinda Kshetra are other names for Hampi. These Hampi magical legends are inextricably interwoven with Hindu mythology.

Pampa was Lord Brahma’s daughter. She was a devout follower of Lord Shiva. The Lord, pleased with her dedication, desired to bestow a favor upon her. She desired him to be her spouse. Lord Shiva had to give in to Pampa’s demand, but not before penance at the Hemakuta Hills. Then it began to rain gold on the hill. Because “Hema” is the Sanskrit word for gold, the hill became known as Hemakuta Hills.

Kiskinda Kshetra is another name for Hampi. Hampi was the setting for the Kiskinda episode in the Hindu epic Ramayana. According to legend, the Vanara kingdom of Kiskinda from the Ramayana was present. In fact, it is said that Hanuman was born in Anjaneya Hills.

Those were the mythical legends associated with Hampi. The legend goes that two local chieftains, Hakka and Bukka, were on a hunting excursion when they came across an unexpected sight. It was common for a dog to chase a hare. But, all of a sudden, the hare became all-powerful and began chasing the dog. This odd occurrence was reported to Hakka and Bukka’s guru (master), Vidyaranya. The Guru anticipated that the location would be exceptional and instructed his disciples to relocate their local capital to that location. As a result, one of the richest and most beautiful kingdoms was formed.

In 1323, the two brothers established the Sangama dynasty, the first rulers of Vijaynagar, the City of Victory. Four dynasties ruled over Hampi for over 200 years, making the Vijaynagar kingdom one of the richest and most famous empires. Hampi was also one of the most important commercial centers of the period. The markets of Hampi were always bustling with dealers and merchants not just from India but from all over the world. It’s no surprise that Hampi has so many marketplaces! 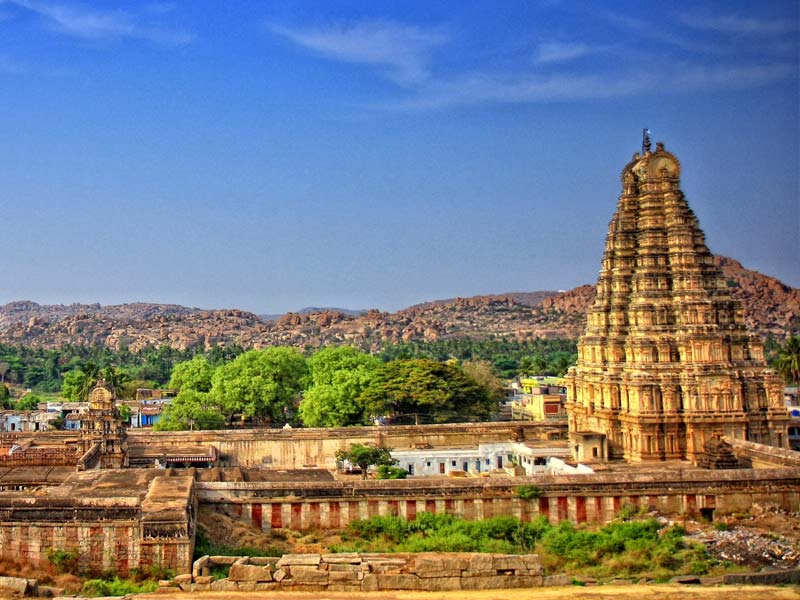 Hampi reached its zenith under the reign of Krishna Deva Raya of the Tuluva dynasty, who reigned from 1509 until 1529. Under the innovative and worldwide commercial methods of the period, Hampi rose to tremendous heights. Art and architecture thrived as well, with gorgeous and majestic temples being built all around the city.

However, Hampi’s golden age did not endure long. The Deccan Sultans launched a devastating attack against the kingdom in 1565, and Hampi was among the targets. For over six months, the Deccan Sultans plundered and destroyed the city, leaving nothing but devastation.

The temples were vandalized, and the marketplaces were looted; eventually, there was nothing left of the mighty empire. Following the catastrophic invasion, the empire was governed by several rulers. Still, it was never able to reclaim its former splendor. The city eventually lost its strategic importance and faded into obscurity. The city has become a ghost town.

Also Read, Mysore: A Beautiful Land in South to Mesmerize you

The legend of Hampi’s boulders: 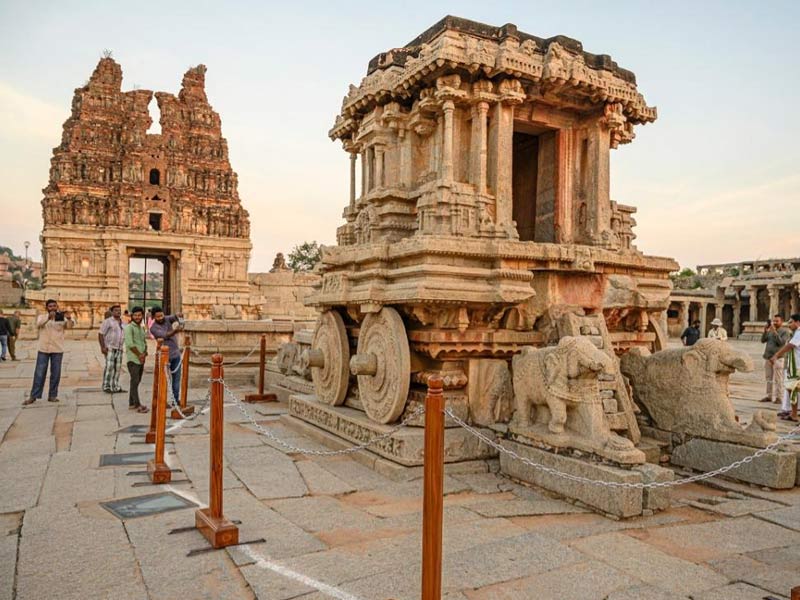 Granite is used to making the boulders at Hampi. These stones have undergone extensive metamorphism. They are a part of the Eastern Dharwar Craton. A craton is a portion of the Earth’s crust that has existed as a solid since its formation and has not been altered by plate tectonics.

On the other hand, Hindu mythology provides a more dramatic and colorful explanation for the Hampi boulders. The location was Kiskinda, and there was a power struggle between the two monkey brothers Bali and Sugreeva. The army flung stones at each other during the intense struggle between the two brothers, and these boulders piled up all around Hampi. Almost everything in India has a mythical underpinning.

What is Hampi famous for?

Hampi is a magical place. The location is similar to an open museum in that you may explore it at your own leisure and find its appeal. And come prepared to be astonished even in unassuming locations, for Hampi is captivating even in ruins.

As a result, we’ve compiled a list of things you shouldn’t miss when visiting Hampi. 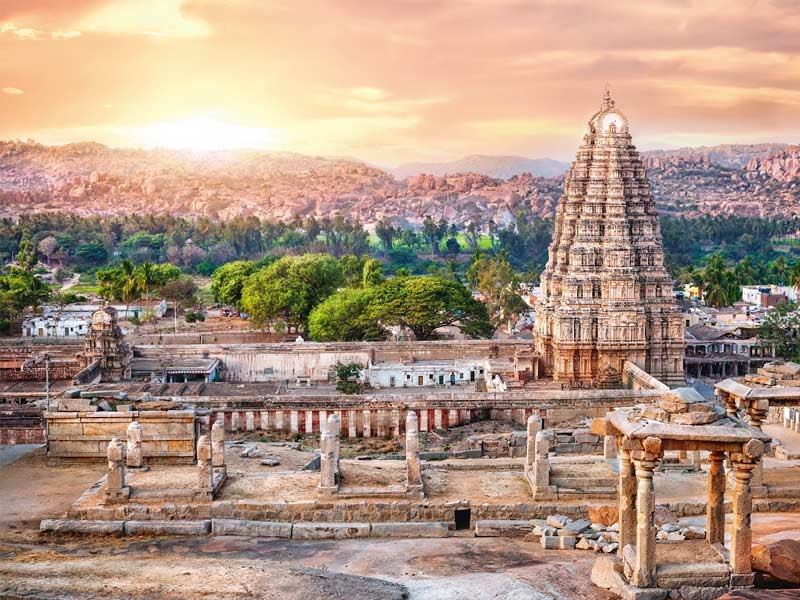 The Virupaksha Temple, located on the southern banks of the Tungabhadra River, is one of Hampi’s most notable buildings. The temple, which stands towering near the market area, is difficult to overlook. It is a significant location of worship for all Shiva devotees. The temple is a huge tower with several smaller shrines, pillared halls, and gates spread across a wide region. The temple also has an intriguing engineering wonder – the operation of one of the first pinhole cameras may be viewed here. 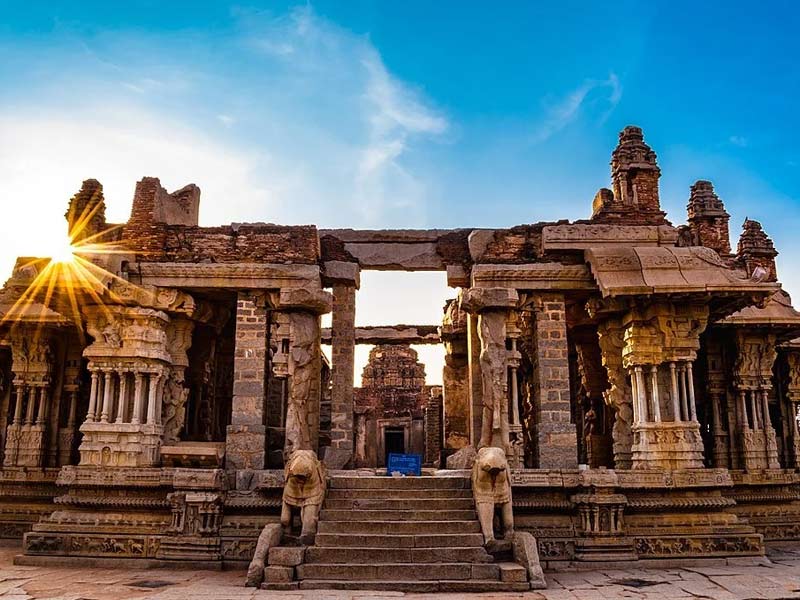 The Vijaya Vittala Temple is Hampi’s most magnificent architectural marvel. The temple is stretched out over a huge complex with various rooms, pavilions, and entrances. Other remains can be found outside of the main temple complex. It appears that a whole town has been established there. It is, in reality, the ruins of the ancient settlement of Vittalapura. In the temple, Vittala, another form of Lord Vishu, was worshiped. The stone chariot is the temple’s most notable feature. 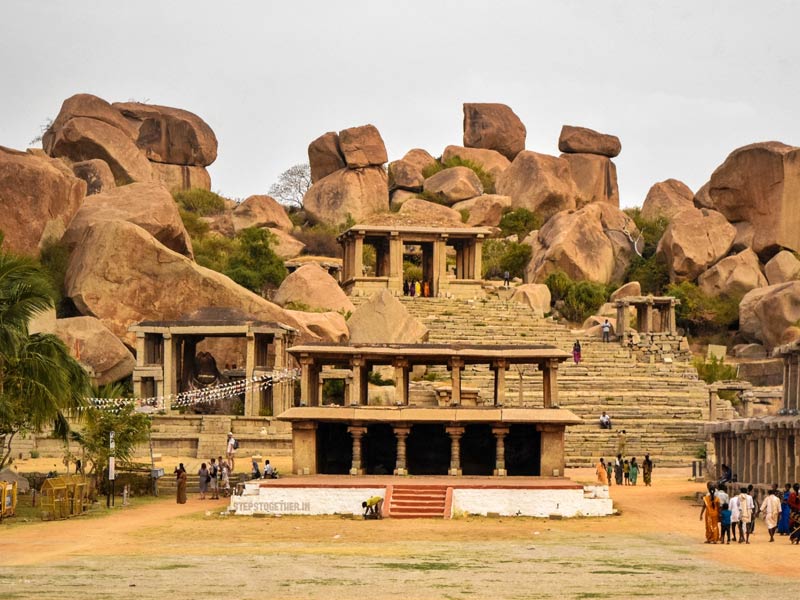 The historic Hampi Bazar is located near the current Hampi market. The Virupaksha Bazar, located in front of the temple, is another name for the market. The sides of the roadway are lined with ancient pavilions that used to house marketplaces in the past.

The Temple of Lakshmi Narasimha 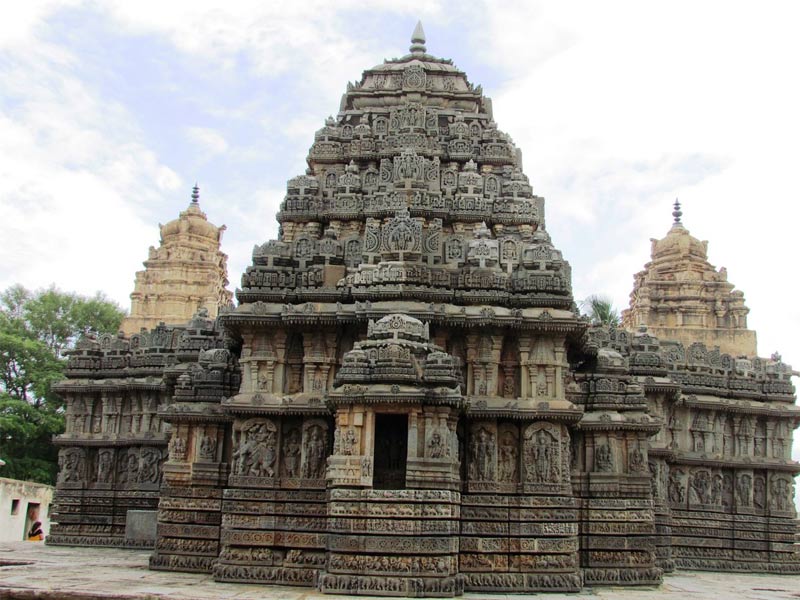 The largest statue in Hampi is the Lakshmi Narasimha statue. Narasimha is perched on the coil of Seshnag, a massive seven-headed snake. The statue depicts Lord Vishnu in his Narasimha form as threatening (incarnation). The original statue depicted Goddess Lakshmi sitting on God’s lap. However, the monument was severely destroyed with the fall of the Vijaynagar kingdom.

King Krishnadevaraya constructed the Krishna Temple in 1513 AD to celebrate his victory against the kingdom of Udaygiri or Utkala (in the present-day Odisha). The image of Balakrishna was the primary idol within the temple (Lord Krishna as an infant). This idol is presently on display in Chennai’s state museum. Inside the temple, there is a massive stone that narrates the narrative of Utkala’s conquering. 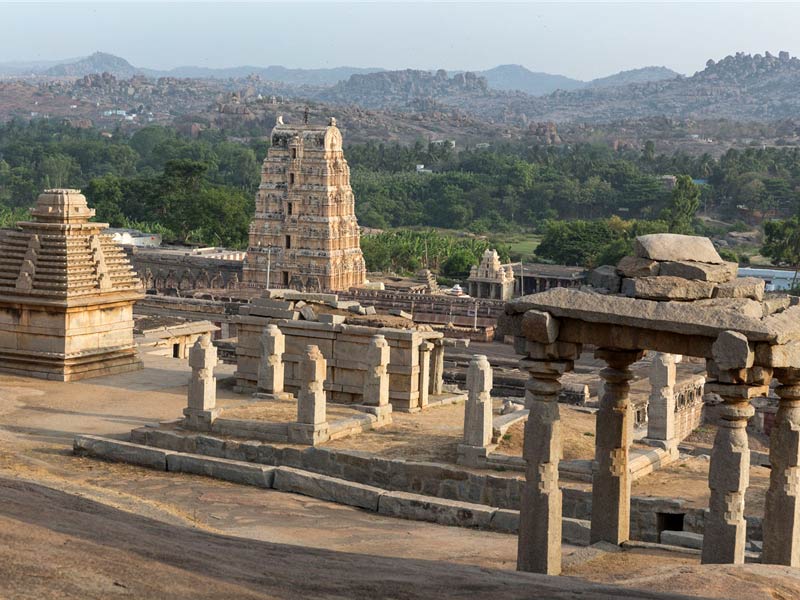 The temple is close to the Hemakuta hills and a bit south of the Kadalekalu Ganesha Temple. This is a massive Ganesha statue.

This temple is located on the Hemakuta Hills’ north-eastern slope. A massive statue of Lord Ganesha made of a single stone may be found here. This statue’s belly resembles a Bengal gram (Kadalekalu in the local language), thus the name.

While in Hampi, don’t miss the beautiful sunset from the Matanga Hills. We didn’t get to see the sunset in Hampi this time because it rained severely on both evenings of our visit! The Matanga Hill is located in the heart of Hampi and provides a bird’s eye perspective of the entire city.

Devaraya II, the monarch of Vijaynagar, erected the Hazara Rama Temple in the early 15th century. This modest yet lovely temple is located in the heart of the royal district. The temple was originally the private shrine of the Vijaynagar empire’s royal household.

The name “Hazara Rama” literally means “a thousand Rama,” The temple has the Ramayana narrative etched on stone. The remains unearthed in this temple are among the most comprehensive in India.

The Anjaneya Hill and Temple 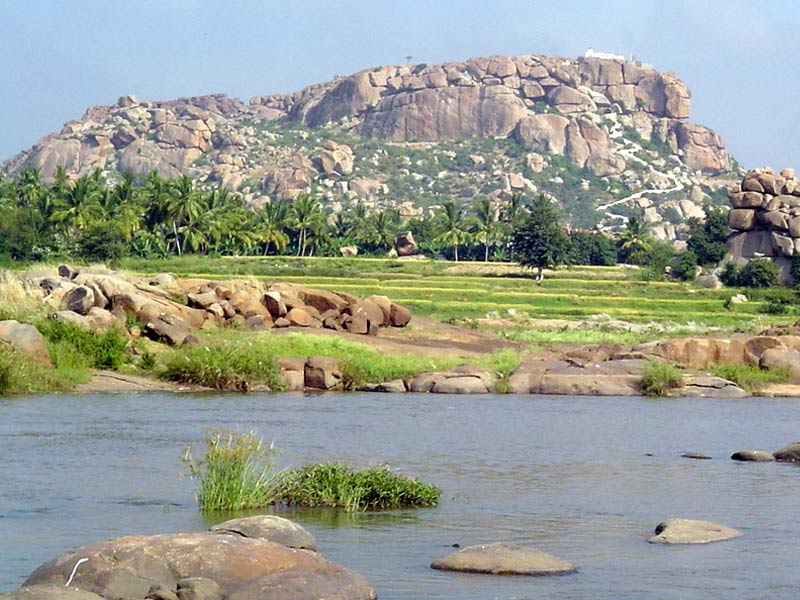 Lord Hanuman is said to have been born on Anjaneya Hill. The hill is located in the Anegondi Area, on the other side of the Tungabhadra River. On the summit, there is a shrine devoted to Lord Hanuman.

The Pampa Sarovar, located near the Anjaneya Hills, is one of the Hindus’ holiest ponds. Next to the pond is a temple dedicated to Lord Shiva and his spouse Pampa Devi.

The Durga temple is also placed on a tiny hilltop on the Anegondi side. The temple is at the foot of a fort. As a result, it is thought that its name is derived from the word “Durg,” which means “fort.” We proceeded away from the temple and toward the fort’s main gate. There were several tombs during the Vijayanagar period. We hiked a little higher and came to the edge of a rock. The setting was absolutely out of this world. The entire city of Hampi was in front of us — we had a bird’s-eye view of the entire area. Didn’t I warn you Hampi will surprise you in the most unexpected places? We had no idea the location would be so lovely.

How to Get to Hampi

The Bengaluru airport is the closest to Hampi.

Places to stay and eat:

Hampi provides a wide choice of lodging alternatives. You may stay near the market area near the Virupaksha Temple, where you can discover various alternatives. The Rocky Guest House was where we stayed.

The greatest locations to dine for less money are roadside stores. We enjoyed delicious South Indian food by the side of the road at a very reasonable price.

When is the best time of year to visit Hampi?

Hampi may be visited at any time of year. However, because you will be traveling around Hampi, the winter season is the best time to visit. Every addition, the Hampi Festival is held in November.

What is the most convenient method to go about Hampi?

Hampi is a location that should be found and explored on your own. Bicycles may be rented for a very low price in Hampi. Bicycles without gear will cost Rs.100/- per day, while bicycles with gear would cost Rs.150/- per day.

Depending on your vehicle, scooters and bikes are available for rent at the Anegundi location for Rs.250-400/- per day. You may also hire a moped for Rs.200/- per day. There are no scooters or bikes for rent on the temple side of Hampi.

The cost of the cars may also change according to the season. There are also autorickshaws that you may use to go about Hampi.

Why should you travel to Hampi?

If you’re interested in tradition and history, or if stories from the past pique your interest, then Hampi is a must-see. Each stone at Hampi offers a tale, whether it’s about the Vijaynagar empire or the mythical myths that are fascinating to hear.

Visit Hampi if you enjoy historical buildings. The best specimens of architecture are the Virupaksha Temple and the Vittala Temple. The exquisite patterns and craftsmanship of these constructions will just take your breath away.

If you enjoy adventure, you must go to Hampi. You will have a fantastic opportunity to go bouldering. The Tungabhadra river coracle trip is equally breathtaking.

Visit Hampi if you enjoy nature. A tiny temple village along the Tungabhadra river, studded with rocks, appears to be a playground for nature’s construction.

Simply go to Hampi. You will have no idea why you should visit Hampi unless you get there.