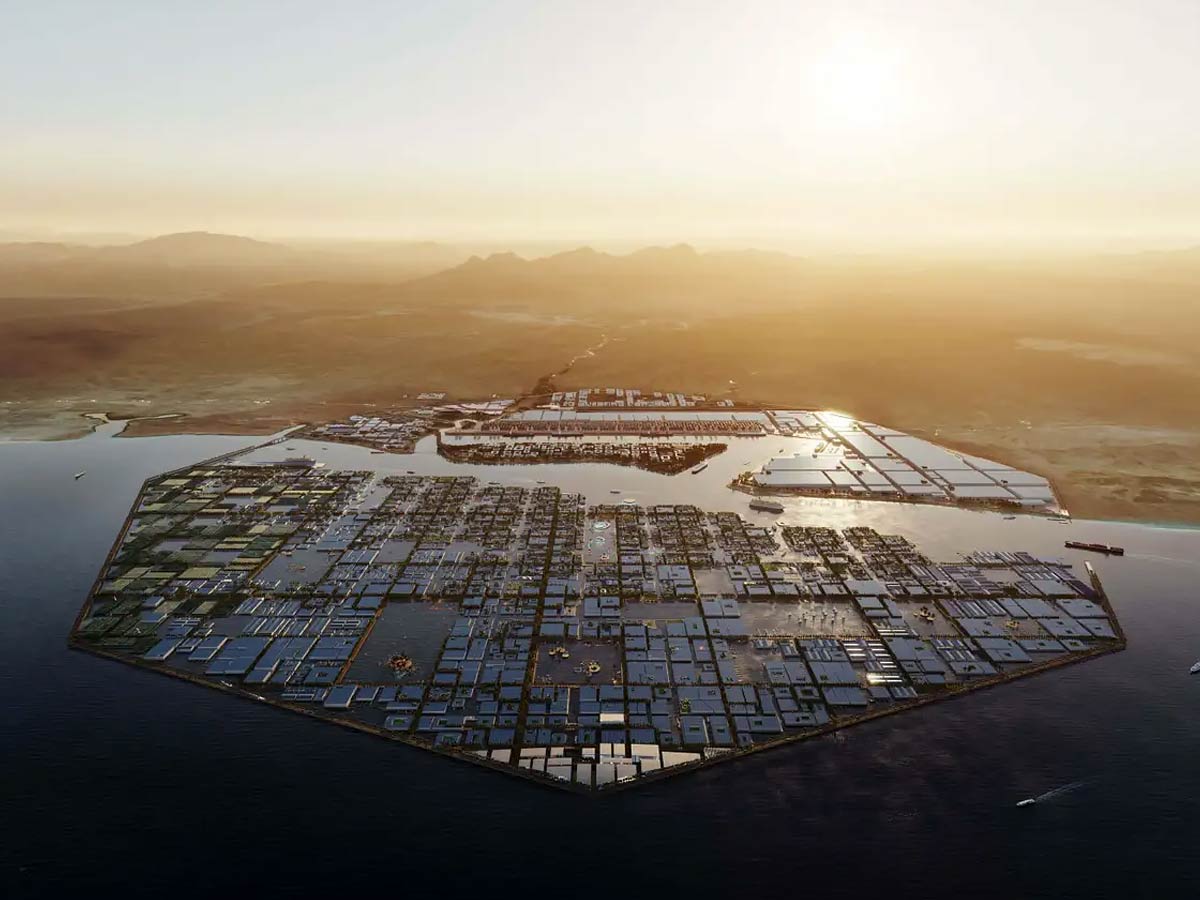 Saudi Crown Prince Mohammed bin Salman has announced the creation of Oxagon, a futuristic new industrial metropolis in the sea. The city will be the world’s largest floating industrial complex. “Oxagon will be the driver for economic growth and diversification in Neom and the kingdom, furthering our aspirations under Vision 2030,” said Prince Mohammed, who is also the chairperson of Neom.

It is near the Suez Canal on the Red Sea, and it will encompass the current port of Duba, which is presently part of OXAGON. The Red Sea accounts for approximately 13% of global commerce, and OXAGON is positioned to be one of the world’s most technologically sophisticated logistics centres, with state-of-the-art integrated port and airport connections. According to a statement issued by Saudi Press Agency, OXAGON complements the same idea and principles as THE LINE, which was revealed in January, and would offer great livability with nature.

For NEOM, OXAGON will create the world’s first fully integrated port and supply chain ecosystem. The port, logistics, and train delivery facilities will be combined, resulting in world-class production levels with net-zero carbon emissions, and setting worldwide benchmarks in technology adoption and environmental sustainability. The net-zero city will be powered by 930 sustainable energy sources and will serve as a meeting place for industry leaders who want to lead the way in developing sophisticated and clean factories of the future.

“It will help Saudi Arabia’s regional trade and commerce, as well as encourage the creation of a new focal point for global trade flows,” he added. “I am glad to see that business and development have begun, and we look forward to the city’s quick growth.”

Also Read, Oxygen on Moon: Here is How you Can breathe on Moon in 22nd Century

For Neom, Oxagon will build the world’s first completely integrated port and supply chain ecosystem. It will be created as an industrial city to show a radical new paradigm for future manufacturing hubs, one that will help to conserve the environment while also producing employment and growth for Neom.

“OXAGON will be a driver for economic growth and diversification in NEOM and the Kingdom, helping us to realise our Vision 2030 aspirations.” OXAGON will help to reshape the world’s approach to industrial development in the future, while also safeguarding the environment and producing employment and growth for NEOM. It will help Saudi Arabia’s regional trade and commerce, as well as enable the establishment of a new focal point for global trade flows. “I am glad to see that business and development have begun on the ground, and we look forward to the city’s quick progress,” says the mayor. Prince Mohammed bin Salman, chairperson of the NEOM Company Board of Directors, stated.

Through Oxagon, Neom’s Chief Executive Officer Nadhmi Al Nasr stated, “The world’s perception of industrial hubs will undergo a fundamental transition. Oxagon will be a complete cognitive city with outstanding livability for its citizens “.. Oxagon’s goal is to create a net zero metropolis powered entirely by sustainable energy.

The dynamic and integrated physical and digital supply chain and logistics system will enable real-time planning, which will cause secure on-time delivery, efficiency, and cost-effectiveness for industrial partners.

The adoption of innovative technologies such as the Internet of Things (IoT), human-machine fusion, artificial and predictive intelligence, and robotics will be at the heart of OXAGON, which will be coupled with a network of fully automated distribution centres and autonomous last-mile delivery resources to drive NEOM’s ambitions of providing a seamless integrated, intelligent, and efficient supply chain.

The net-zero city will be powered entirely by clean energy and will serve as a focal point for industry leaders seeking to pioneer change in order to build the innovative and sustainable factories of the future.

The nucleus of OXAGON’s industrial growth comprises seven areas, with innovation and new technology providing a critical foundation for these businesses. Sustainable energy, autonomous mobility, water innovation, sustainable food production, health and well-being, technology and digital manufacturing (including telecommunications, space technology, and robotics), and modern construction methods are among the industries that will be powered entirely by renewable energy.

Nature will be interwoven into communities.

Many of THE LINE’s attributes that make it a great place to live are mirrored in the urban landscape of OXAGON. Communities will be walkable or accessible by hydrogen-powered transportation. Sustainable industry will be constructed around communities, reducing commuting time and delivering great liveability by seamlessly integrating nature into the urban environment.

Education, research, and innovation will compete with global hubs.

OXAGON will innovate to build a genuinely circular economy through a collaborative environment centred on research and invention: OXAGON’s innovation campus will house an Education, Research, and Innovation (ERI) ecosystem capable of competing with established worldwide institutions.

OXAGON development is well advanced, and enormous manufacturing facilities are being designed. These facilities include the world’s largest green hydrogen project, a joint venture between Air Products, ACWA Power, and NEOM; the world’s largest and most advanced modular building construction factory with Gulf Modular International; and the region’s largest hyperscale data centre, a joint venture between FAS Energy and NEOM.

With a best-in-class regulatory structure for mass support, OXAGON will expand quickly and welcome its first manufacturing tenants in early 2022.

NEOM is a human development accelerator and a vision of what a New Future may look like. It is a Red Sea region in northwest Saudi Arabia being constructed from the bottom up as a living laboratory – a location where entrepreneurship will map the way for this New Future. It will be a destination and a home for those who have glorious dreams and want to be a part of developing a new paradigm for excellent liveability, successful enterprises, and environmental protection.

More than a million people from all over the world will call NEOM home and work. Hyper connected, cognitive towns and cities, ports and industrial zones, research institutions, sports and entertainment facilities, and tourism sites will all be part of it. Entrepreneurs, business leaders, and corporations will converge to this innovation centre to explore, incubate, and commercialise innovative technologies and enterprises in novel ways. Residents of NEOM will exemplify an international attitude and embrace a culture of exploration, risk-taking, and variety, all while being protected by progressive legislation that is compatible with international norms and conducive to economic success.