Home Life Travel The Mounds of The Ahoms: India’s Own Version of Pyramids 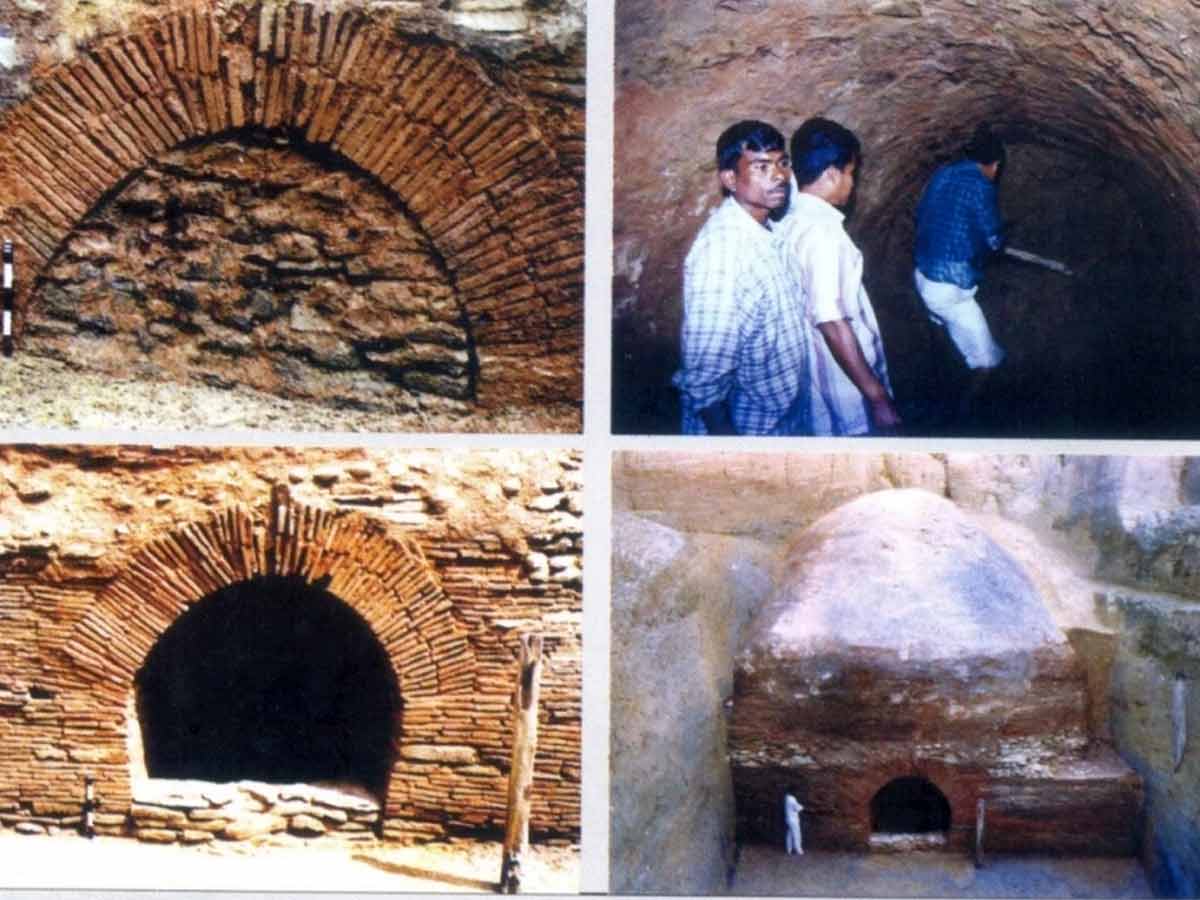 History plays a huge role in deciding what lies in the future and history must be told. India has had a glorious past of thousands of years and there are enough stories and anecdotes to tell for a lifetime. Being one of the oldest civilisations on the planet, India has seen hundreds of empires rise and fall. Some rules for centuries while some crumbled under the pressure from different agents. The vastness of India and the uniqueness in the culture is due to different empires calling this part of the world their home.

One such kingdom was the Ahom Kingdom.

The Ahom dynasty ruled the Ahom Kingdom for nearly 598 years from 1228-1826. It was only after the arrival of the Britishers that the empire fell. The Ahom kingdom lay in the Brahmaputra valley and included present-day Assam and parts of Arunachal. The term Assam originates from ‘Asama’ which is a word for Ahoms in the local language. 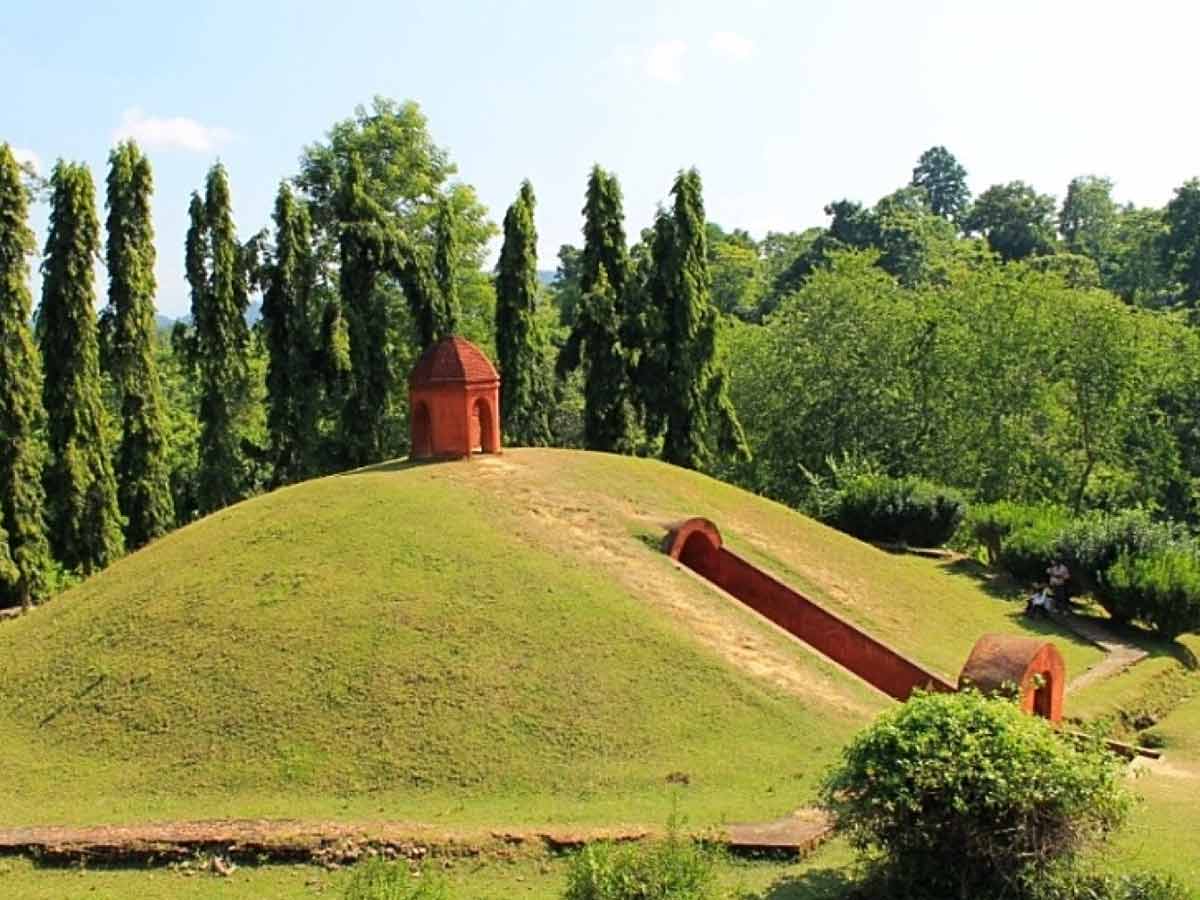 Why are we talking about the Ahoms? Because it’s time to unravel the lesser-known facts about Assam’s rich historic heritage. For all those travel junkies who have been to Egypt just to pose in front of the iconic Pyramids, how would it feel to know that India has had its own version of pyramids in Assam? Yes, the Ahom kings were buried inside the mounds with their paraphernalia. However, not many know this fact.

Where can you find these mounds? There’s a town named Charaideo located at a distance of nearly 400 km from Assam’s capital Guwahati. Charaideo is important in historical context as it served as the first capital of the Ahoms. Another thing that makes the town special apart from its rich history is the man-made burial mounds or maidams that were constructed for the royals. It is one of the most unique ways of burying the royals in India. In 2014, the mounds were named a World Heritage Site. Hence, the world knows about them without the country knowing them.

Also Read, Interesting facts about the Pyramids that you probably didn’t know about!

When Chao Lung Siu-Ka-Pha, a member of the Tai clan entered India in 1228, he settled in Assam and established his dynasty. The people from the dynasty were called Ahoms. The Ahoms went on to rule the region for 600 years and the time was enough to build hundreds of mounds for the royals generation after generation. That is how Charaideo gained the value that it holds today. For someone who loves to learn new things about the history of India, the town is like a treasure begging to be explored. 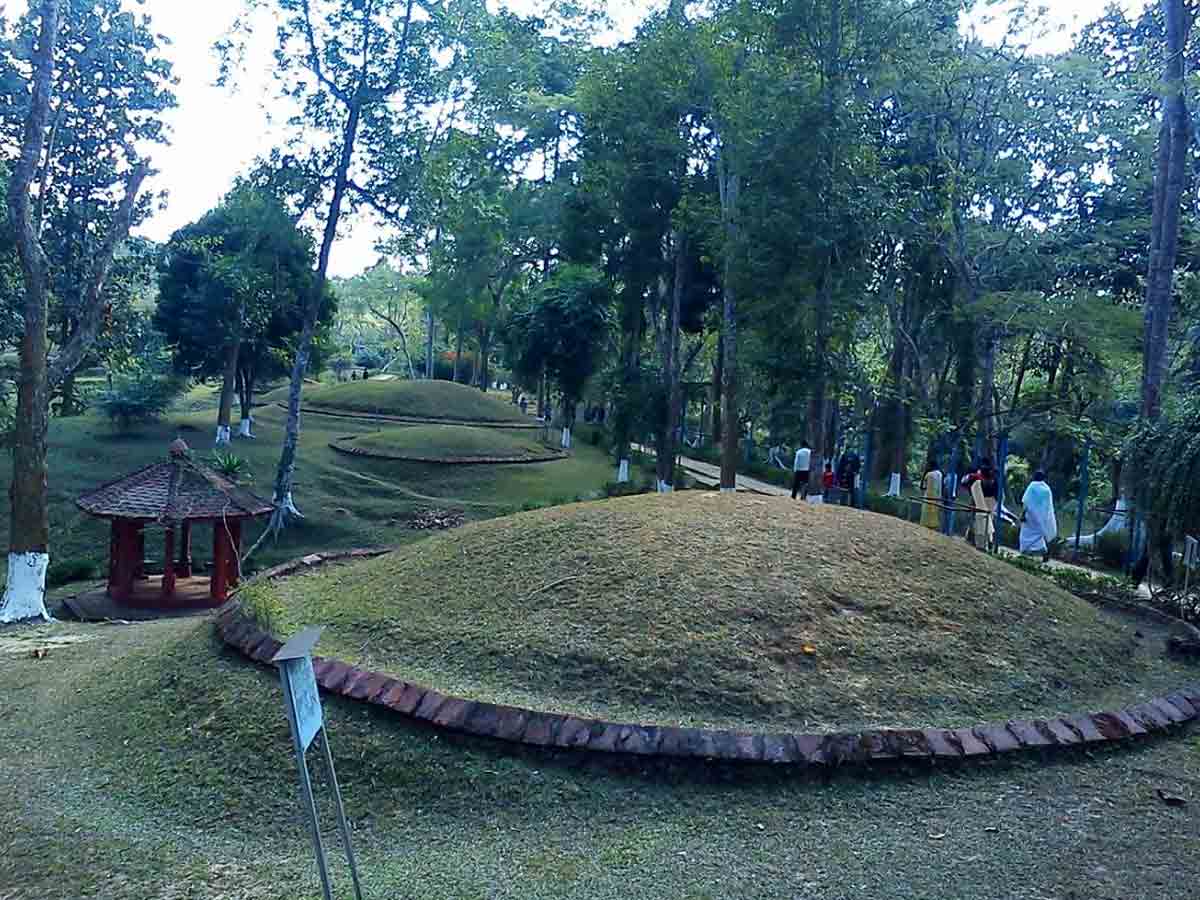 The reason why Ahoms got the royals buried in mounds is very similar to why Egyptians had Pyramids. Ahoms too believed in life after death and that is why such structures were created for those who were considered sacred. This included the royals, their consorts and the priests. All the royals and the nobles were buried inside the mounds along with their possessions.

The word maidam originates from Tai word Phrang mai-dam. It translates into burying the spirit of the dead. The only difference between pyramids and maidams is that maidams are hemispherical in shape. Only the royals and the nobles were allowed to be buried inside the mounds, not the common people.

Composition of a maidam or mound: There are three different parts of a maidam. The first one is a vault, the second is the hemispherical mound that covers the chamber. It was made using bricks. The third and final part of the maidam is an octagon-shaped boundary built around the base of the mound with a gateway in the west direction.

The construction work of maidams was overlooked by a special officer appointed by the king himself. The officer was called Changrung Phukan. A kind had 9 special ministers and Changrung was selected from those 9 ministers. Apart from this, special officers were assigned the task of protecting the structures. The earliest known maidam was constructed in 1268 CE after the demise of the first Ahom king, Siu-ka-pha. He was considered secret and his ancestors were also buried in the maidams after their demise. There is no definite count of how many maidams were built as no one knows when the last one was constructed. However, historical texts do mention the construction of maidam during the reign of King Rudra Singha (1696-1714 CE). The practice slowly started to end as Ahoms started moving to Hinduism by that time. Soon, they adopted the cremation method as per the Hindu rituals.

There are several stories when external occupational forces including the Mughals attacked the region and destroyed the maidams to steal valuable items. The Britishers did the same in the mid-19th century as well. However, there still are some of the maidams. The archaeological survey of India has unearthed two of them and a walkway has been built to give history-buffs a view of how the maidams used to look from inside.