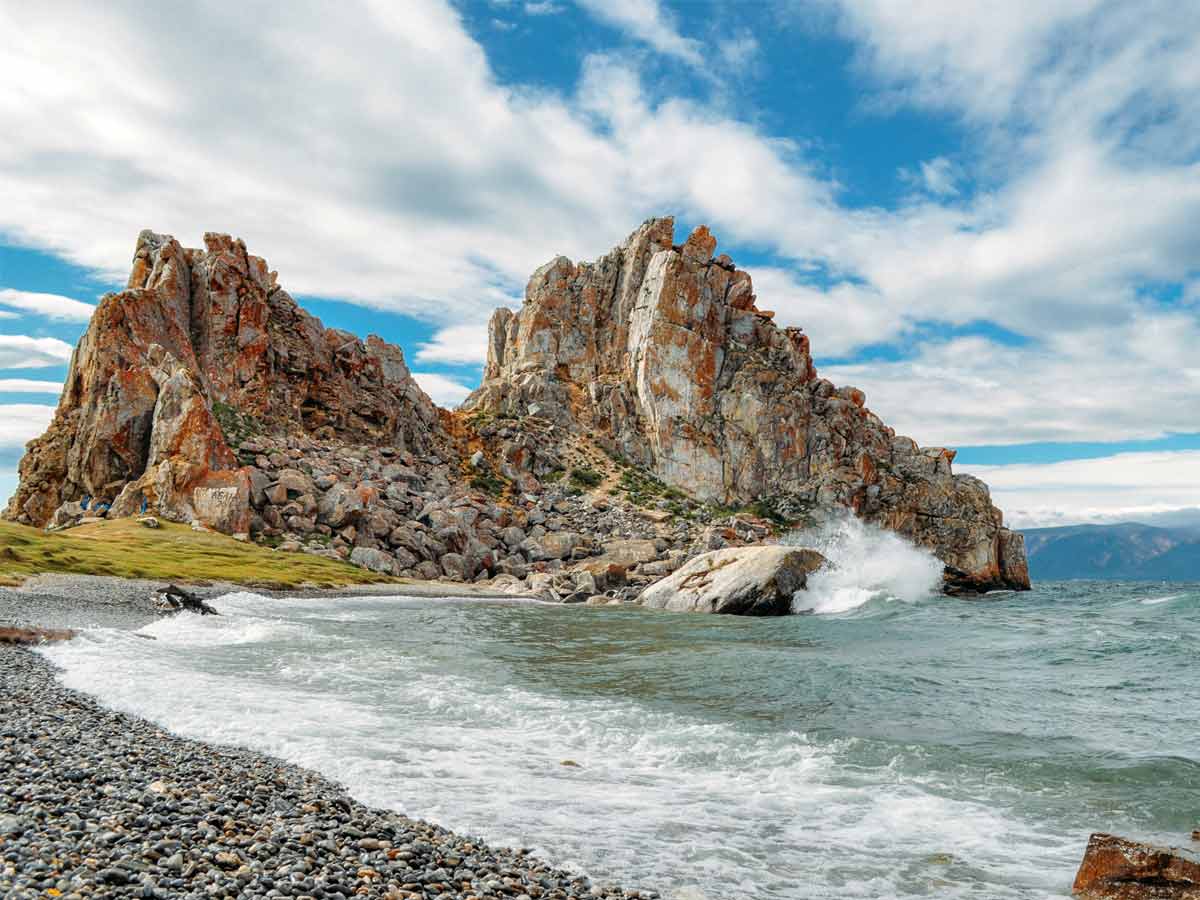 Olkhon Island is abundant in natural beauty; no one will be disappointed. These protected places have it all:

You may go fishing, take a motorboat tour, and meet actual shamans who will tell you traditions passed down from generation to generation for generations. A journey to Olkhon combines the spectacular beauty of Baikal’s landscape. It is hard to put into words the clean and wild attractiveness of these locales. At the same time, expert photographers believe that nearly every image taken on the island is already a masterpiece.

Olkhon features a remarkable terrain mix and is rich in ancient sites. Mount Zhima, at 1,276 meters (4,186 feet) above sea level, is the highest point on the island, culminating at 818 meters (2,684 feet) over the water level of Lake Baikal. The island is large enough to have its lakes and includes taiga, steppe, and even a tiny desert. The island is separated from the mainland by a narrow strait.

The island’s appearance is the product of millions of years of tectonic action that hollowed out the channel between the land (Maloe More Sound and Olkhon Gate Strait) and the block of stone that forms the island. The steep slopes of the mountains demonstrate the earth’s vertical heave.

Things to do in Olkhon

Archaeological research done in the caves and caverns of Cape Shamansky discovered several human bones, old-time tools of work, and household artifacts, some of which dated back to the Neolithic period.

Sagan Khushun Cape is located on the island’s western shore (White Cape). It appears to be an extended rocky mass of white marble from the ocean. Still, from the land, it transforms into a rock ensemble that alters its appearance nearly beyond recognition depending on the angle. The scarlet lichen on the cape rock contrasts with the dazzling white cliffs. Cape Sagan Khushun offers a beautiful view of the Small Sea, Seaside Ridge, and Cape Khoboy from the summit.

Olkhon’s northernmost point is Cape Khoboy (Fang). You can see a rock on the cape with the silhouette of a woman’s profile on a Greek galley nose from a distance. According to one Buryat tradition, this rock represents a girl turned to stone by the gods because of her jealousy and wicked disposition. The most stunning dawn is said to be visible from Cape Khoboy. It was formerly a site for shamans to perform rituals. Still, it is now a popular location for meditation among adherents of many spiritual beliefs.

Shara-Nur (Yellow Lake) is an inland saline lake located 750 meters above sea level. Swimming is very enjoyable since the lake is protected from the persistent winds of Olkhon by forests and hills. Shara-Nur is well-known for its medicinal muds and warm baths, especially beneficial to the joints.

Pad Tashkiney is located on Olkhon’s eastern shore. Because of the rugged coastlines surrounding the bay, its position is ideal for fishing. Against the backdrop of many other Olkhon sites, Seagull Island, populated by gulls and cormorants, and Cape Khorgoy, with fragments of the existent old Kurykan wall, stand out.

The Saraysk bay, which has a three-mile-long sandy beach, is well worth a visit: the pines that grow there are reminiscent of Baltic Sea scenery.

Khuzhir Huzhir, Olkhon’s largest settlement, with 1,200 residents out of a total population of 1,500 people that live continuously on the island. Huzhir has sublimated in recent years due to the rising popularity of Olkhon among visitors, eventually becoming a resort community.