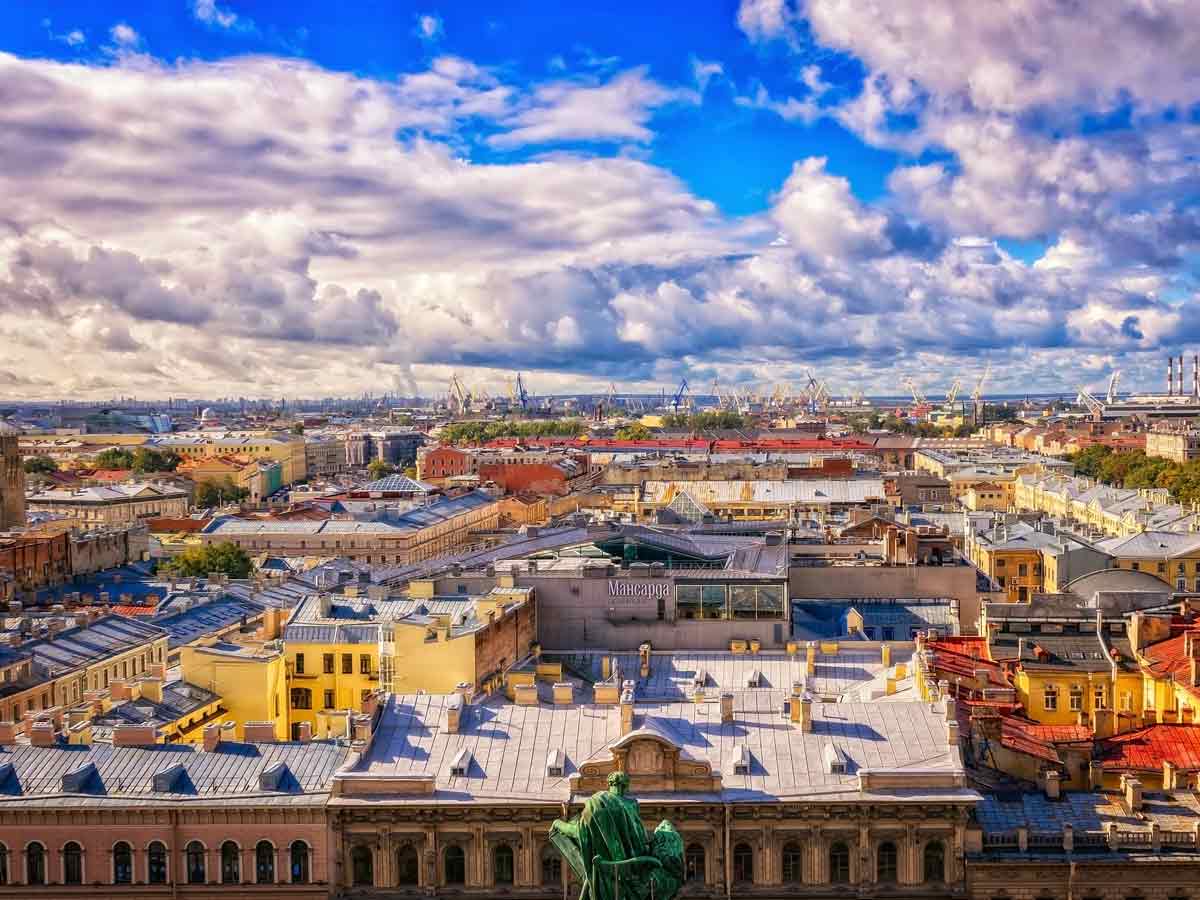 Saint Petersburg, originally known as Petrograd (1914–1924) and then as Leningrad (1924–1991), is Russia’s second-largest city. It has a population of around 5.4 million people and is located on the Neva River, at the head of the Gulf of Finland on the Baltic Sea. Saint Petersburg is the fourth-most populated city in Europe, the most populous city on the Baltic Sea, and the world’s northernmost metropolis, with a population of over one million people.

Tsar Peter the Great constructed the city on a conquered Swedish stronghold on May 27, 1703, and named it after the saint Saint Peter. Saint Petersburg is historically and culturally linked to creating the Russian Empire and Russia’s entry into contemporary history as a European powerhouse.

Saint Petersburg, known for its elegance and grandeur, is swamped in gorgeous architecture, with stately palaces and churches jostling for space beside its many canals and rivers. It is Russia’s second-largest city, after Moscow, and is located at the mouth of the Neva River on the banks of the Gulf of Finland. It was founded by Peter the Great in 1703 and served as the Russian Empire’s capital for centuries.

Saint Petersburg, known for its elegance and grandeur, is swamped in gorgeous architecture, with stately palaces and churches jostling for space beside its many canals and rivers. It is Russia’s second-largest city, after Moscow, and is located at the mouth of the Neva River on the banks of the Gulf of Finland. Peter the Apostle founded

With its museums, historical tourist sites, and palaces, Saint Petersburg offers a lot. Because of its long summer days, this city has been dubbed “the City of White Nights.” It is a lovely destination to visit at any time of year.

This amazing museum, housed in the majestic Shuvalov Palace, houses the most extensive collection of works by the famed Russian jeweler Peter Carl Faberge, after whom it is called. Its exquisite chambers and sophisticated galleries include approximately 4,000 artworks ranging from porcelain and paintings to finely carved and ornately sculpted bronze, silver, and gold artifacts.

The museum’s undeniable highlights are Faberge’s nine Imperial Easter eggs for the two final Russian Tsars, Alexander III and Nicolas II. They glisten and sparkle in the light, are ornamented with diamonds and display wonderful and complex craftsmanship.

The Alexander Nevsky Monastery, which sprawls across a wide expanse, is one of the most significant spiritual centers of the Russian Orthodox Church and is still in use today. It was founded in 1710 by Peter the Great on the site where Alexander Nevsky, a former prince, and now the city’s patron saint, is supposed to have beaten the Swedes in battle in 1240.

The monastery and its lush grounds are undoubtedly intriguing to tour since they include two beautiful Baroque buildings, the Neoclassical Holy Trinity Cathedral, and a slew of elaborate graves of great Russian individuals.

The State Russian Museum, which occupies one full side of Arts Square in the heart of Saint Petersburg, is an excellent venue to learn more about Russian art. The museum, which opened in 1895, is housed in the massive Mikhailovsky Palace, which is a piece of art in and of itself: the Neoclassical structure has a plethora of gorgeous rooms and galleries.

Beginning with artworks and Byzantine-inspired icons from the 12th century, the extensive collection takes you on an astonishing trip through the years, featuring socialist-realist masterpieces alongside portraits of princes and epic landscape paintings. The State Russian Museum is sometimes ignored in favor of the Hermitage, but it is worth visiting if you are interested in art.

The artificial New Holland Island, built-in 1719, is so named because the rivers and canals surrounding it give the impression that it has just popped up out of Amsterdam. The triangle island was formed when Admiralty Canal and Kryukov Canal were built to connect the Moika and Neva rivers, hence the Gulf of Finland.

If you’re interested in modern Russian art, the Erarta Museum on Vasilyevsky Island is the place to go; its large collection is spread across five levels of a gigantic edifice. Its large galleries house over 2,800 artworks, including graphics, installations, sculptures, and a multitude of paintings. Aside from its outstanding permanent collection, the museum also regularly offers temporary exhibitions, events, and performances. Beautifully thought out and displayed, the museum’s spectacular artworks and elegant design bring in a new ‘Era’ of ‘Art,’ which gives the museum its name.

The State Hermitage Museum, the world’s second-largest art museum after the Louvre in Paris, has a magnificent collection scattered across five buildings and 360 rooms in the heart of Saint Petersburg. Founded by Catherine the Great, a passionate art collector, the vast collection of paintings, sculptures, and antiquities was expanded by several tsars until Nicolas I presented to the public in 1852.

The Peterhof Grand Palace, commissioned by Peter the Great to eclipse the Palace of Versailles in splendor and magnificence, surely succeeds. Its sprawling collection of palaces and gardens is enthralling to explore, with beauty, art, and nature on display wherever you turn.

Saint Petersburg’s Church of the Savior

Saint Petersburg’s Church of the Savior on Blood resembles the world-famous Saint Basil’s Cathedral in Moscow, appearing as a storybook. Five beautifully ornamented onion domes rise over the main body of the church below in a similar style.

The magnificent church was built between 1883 and 1907 at a huge cost to commemorate Tsar Alexander II, who anarchists severely wounded at the same location.