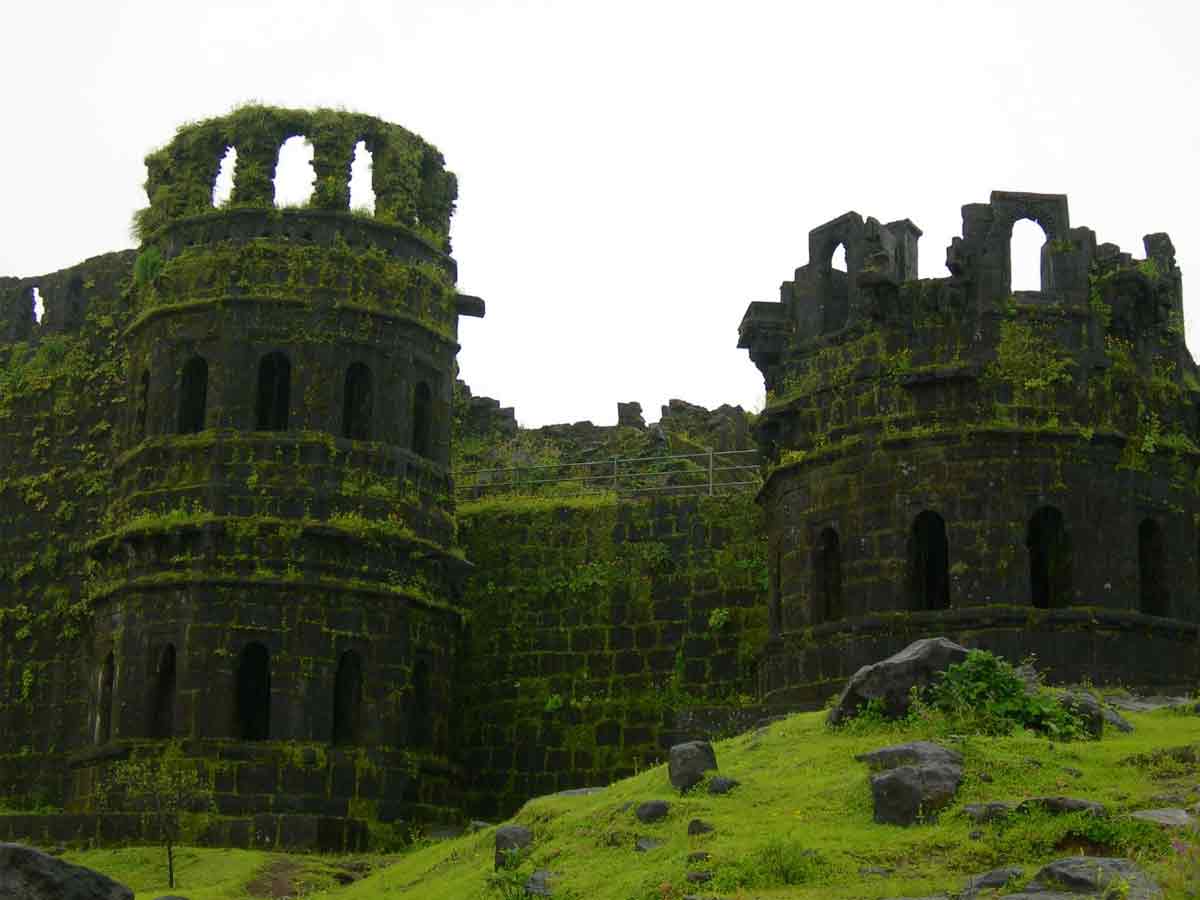 Raigad Fort is said to be the Gibraltar of the East and is known for its majestic and aesthetically pleasing beauty. The fort is one of the historic monuments that can make you relive the past of the country and will fill you with great enthusiasm to learn more about the history of the country for sure. The fort is located at an elevation of 820 meters from sea level in the mountain range of Sahyadri.

A single pathway of 1737 steps leads to the fort. The strategic construction of the fort is reminiscent of the clever architecture and design employed centuries ago. Also, it is surrounded by deep green valleys that offer a mesmerizing view. The fort has several entrances that entice visitors, including the Mena Darwaja, Nagarkhana Darwaja, Palkhi Darwaja, and the majestic Maha Darwaja, which serves as the main entrance to the imperial structure. The fort still stands as a living reminder of the Marathas’ glory and valor.

Just like the other monuments of India, Raigad fort has a magnificent history that enhances its beauty and makes it an important part of the country. The history of this Raigad fort traces back to when Chatrapati Shivaji Maharaj, a distinguished Maratha ruler, seized the fort of Rairi from Rajchandraji More, Ruler of Jawali, in 1656 and built his capital city. He renamed the fort “Raigad” after expanding and renovating it. The villages of Pachad and Raigadwadi, are at the base of the fort, played a crucial role in the royal house’s defense.

During the Marathas’ reign, it is said that cavalry of ten thousand men was always kept on standby in Pachad. Aside from its strategic location, which cut off access to the Western Ghats, the Raigad Fort was heavily fortified to keep swarming enemies at bay.

After that the fort was invaded by Mughals who defeated the Marathas and renamed the fort as ‘Islamagad’. Then the rise of British East India Company after the colonization of India, saw this fort as a stronghold and hence led expeditions against it. In 1818, the British bombarded and destroyed the Marathas’ legacy before seizing control of the remaining ruins.

If you haven’t paid a visit to this amazing piece of architecture in our country, i.e. Raigad Fort then here’s the perfect guide for you!

Rani Vasa: The Rani Vasa’s chambers, which are made up of six chambers each with its restroom. These chambers were then used by the mother of Chhatrapati Shivaji and other royal ladies.This chamber of the fort is really a sight to behold.

Palkhi Darwaja: Located just in the front of Queen’s chamber Palkhi Darwaja served as the entrance to the convoy of Shivaji Maharaj. Historians believe that the three dark chambers to the right of this doorway are the fort’s granaries.

Raj Bhavan: Shivaji’s main palace, Raj Bhavan, was built of wood, but currently, only the pillar bases remain. This Raj Bhavan was once the home to all the royal Marathas and has been the part of their joys, sorrows, rage, triumph etc. and it still has those vibes that will make you feel the nostalgia of this place in the fort.

Raj Sabha: The Raj Bhavan leads to the Raj Sabha, which is a large, sprawling lawn. During the Maratha rule, this open space witnessed many significant events. The Raj Sabha has witnessed it all, from the glory of battle victories to Shiv Chhtrapati’s coronation. Also, this was the only location where the shackles of slavery were broken down by Shivaji Maharaj, that had been in place for over 300 years and established Hindavi Swarajya. The king’s throne was a magnificent work of art studded with precious jewels like diamonds and pearls and supported by a 1000 kilogram column of pure gold.

The Royal Bath: The Royal Bath’s impressive drainage system reflects the architectural excellence that existed centuries ago. You’ll be surprised to learn that it leads to an underground cellar that was once used for secretive activities such as worshipping Bhavani Mata, storing loot from wars, secret dialogues, and other such things.

Holi Cha Mal: There is a large open ground just outside the Nagarkhana Darwaja that was once used by the fort’s inhabitants to celebrate Holi. Today, it’s a great place to spend time with family and friends. The magnificent structure of the Bara Tanki, which consists of over a dozen water reservoirs, that will astound you.

Hirakani Buruj: The Hirakani Buruj is a well-known wall within the grounds of Raigad Fort that still stands strong today. This wall, which was built over a high cliff, has a fascinating backstory. Local folklore claims that a woman named Hirakani from a nearby village came to Raigad to sell milk at the fort. She was trapped inside the fort, however, when the wall’s gates were locked after sunset.

She, after hearing the echoes of her little son crying from the village couldn’t stop herself there and couldn’t wait for the doors to get opened in the morning and hence climbed the steep cliff during the dead of night. When Shivaji heard about her bravery, he built the Hirakani Buruj in her honor.

Takmak Tok: The Takmak Tok is a 1200-foot-high rock cliff. It is a popular tourist destination in Raigad due to the breathtaking view of the enchanting valleys of the Sahyadri hills. S per the natives, this place was in use to punish the wrongdoers to their death. Hence, this place marks a special significance in the fort.