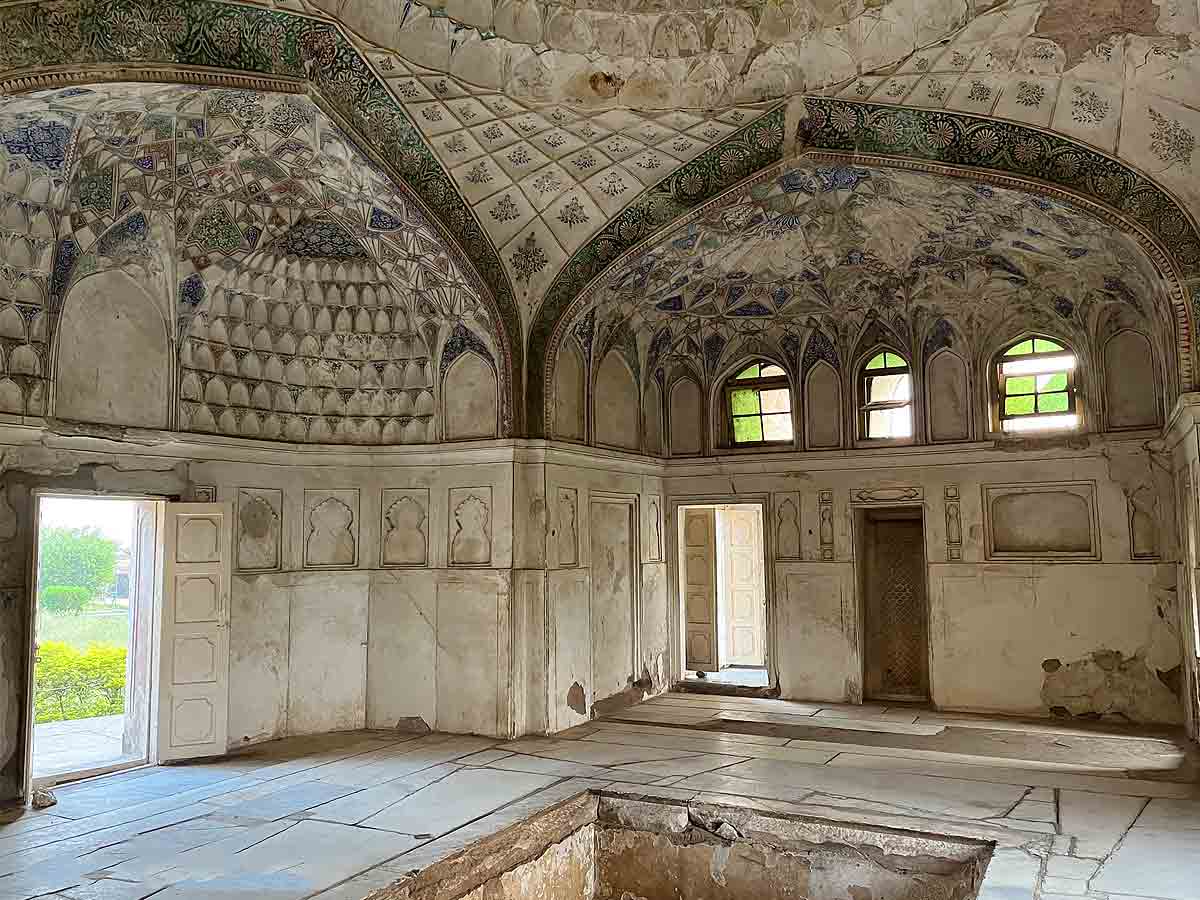 An interesting fact about the small town is that it was once thought to be the birthplace of the magnificent Taj Mahal. Mumtaz Mahal, Shah Jahan’s consort, died in Burhanpur while giving birth to her 14th child.

The mortal remains of the queen were kept here for a long time before the Mughals relocated their capital to Agra, and her body relocated with the capital to be housed in the Taj Mahal. The Taj Mahal’s chosen site on the banks of the Tapti river still stands empty as a reminder of a bygone era and its rich history.

The Taj Mahal’s chosen site on the banks of the Tapti river still stands empty as a reminder of a bygone era and its rich history. Visit These Locations

THE CEILINGS AND WALLS OF THIS FORT are adorned with paintings, some of which were crudely renovated in the early 2000s. The frescoes, though flaked and fading, reveal an exquisite palette, and one of these images, depicting a domed structure with minarets, is said to have served as architectural inspiration for the Taj Mahal, a mausoleum built by an emperor for his favorite wife.

Built around 1500 A.D. on the banks of the Tapti River by rulers of the Farooqi Dynasty, this fort in central India’s Burhanpur is famous for housing Mughal emperor Shah Jahan during his two-year stay in the city to quell a revolt among southern Indian kingdoms. It’s also where the emperor’s beloved wife, Mumtaz Mahal, died in June 1631 while giving birth to her 14th child.

Because of its vast, confusing architecture, the seven-story fort is often referred to as Bhoolbhoolaiya (“labyrinth”). It’s mostly in ruins now, but it’s reasonably well-kept. The palace’s former opulence remains, as does its connection to the country’s most celebrated monument.

The Shahi Qila in Burhanpur was once a glorious fort and gateway to the Deccan, which increased its political significance.

The glory is gone, as are the kings and queens, and so is the opulence. However, there are still glimpses in its architecture. Shahi Qila’s perplexing arches and walls have earned it the local moniker ‘Bhulbhulaya’ (a labyrinth).

Hammam Khana was constructed during the Mughal era. Because most of the forts are in ruins due to a lack of restoration work and neglect, the hammam is one of the few remaining buildings. The Hammam khana, which is more like a long luxury spa area, was specially designed for Shah Jahan’s wife, Begum Mumtaz Mahal, so she could bathe in water scented with khus, saffron, rose petals, and other essential perfumes.

The hammam khana is the only place where the fort’s glory is still visible. One example is the colorfully painted ceiling. The hammam ceilings are beautifully painted with intricate designs.

One interesting fact about Burhanpur’s Shahi Qila is that Mumtaz Mahal not only lived here during her final days, but it was also the site of her husband’s dream, the Taj Mahal. One can still see the chosen location on the banks of the Tapti River, which is still vacant.

Arjumand Bano, also known as Mumtaz Mahal, died during childbirth in the fort of Burhanpur.

According to historical records, Mumtaz Mahal’s mortal remains were kept at the Ahukhana for six months after her death. Although the Ahukhana was once a vibrant retreat for the royal Mughals, it is now a neglected site overgrown with wild grass.

The Ahukhana receives only 80 to 100 visitors per month due to poor maintenance. According to reports, the ASI is uninterested in maintaining the Ahukhana due to a lack of staff in its offices.

Mumtaz Mahal’s body was kept in a garden on the banks of the Yamuna River for about 22 years until the Taj Mahal was completed in 1653 A.D.

How to Get to Burhanpur by Air:

The nearest major airport is in Indore, about 163 kilometers away. The airport has direct flights to cities such as Delhi, Mumbai, Hyderabad, Chennai, and Ahmedabad.

The railway station in Burhanpur is well connected to major cities such as Mumbai, Varanasi, Surat, and other major stations both within and outside the state of Madhya Pradesh.

One of the best ways to get to Burhanpur is by road, as it is well connected by regular bus services to and from major cities across the state, such as Bhopal, Indore, Ujjain, and others, as well as the neighboring state of Maharashtra, as it is close to the border.