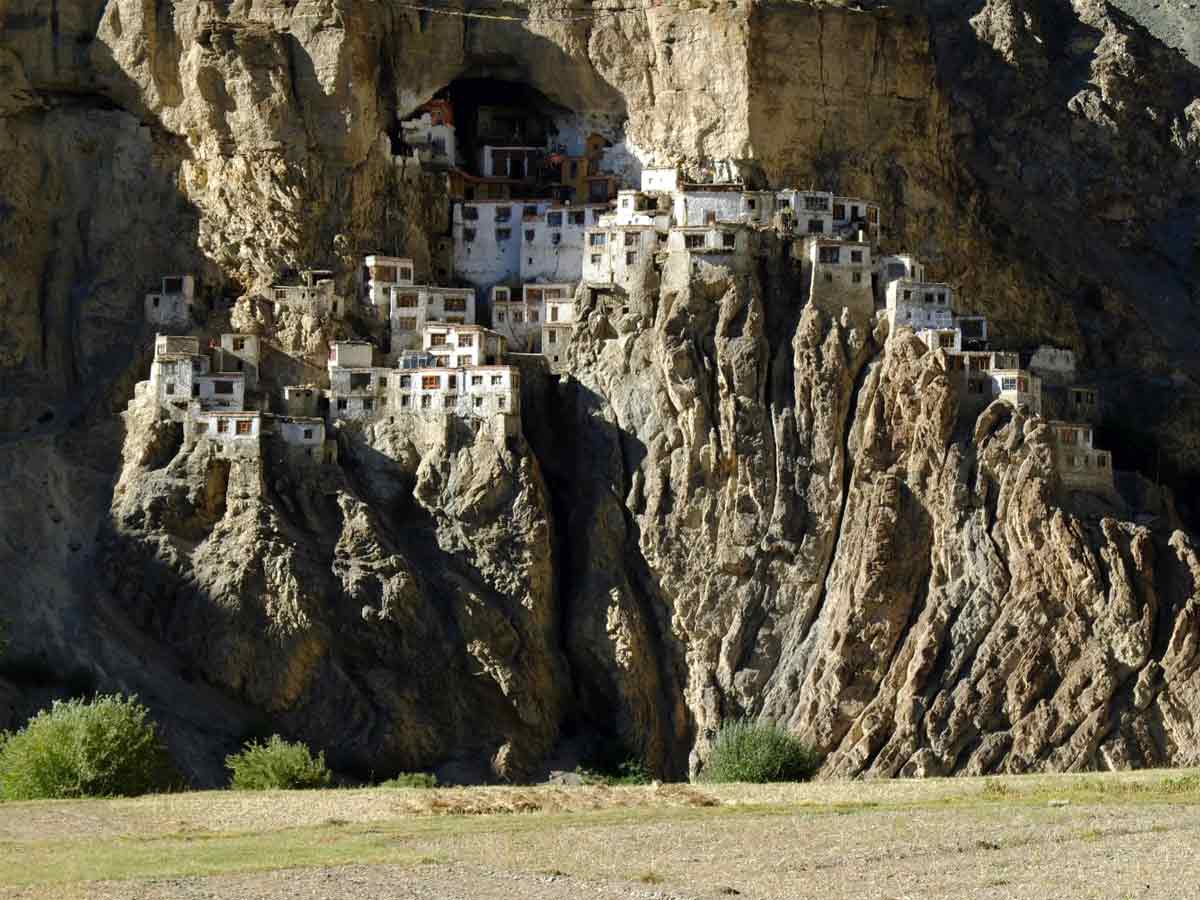 The Phuktal Monastery or Phugtal Gompa (commonly spelled Phugtal) is a Buddhist monastery in the isolated Lungnak Valley in south-eastern Zanskar, in the Himalayan region of Ladakh, in Northern India. It is one of the few Buddhist monasteries in Ladakh that can only be accessed on foot. During the summer, supplies are delivered to the monastery by horses, donkeys, and mules; during the winter, supplies are conveyed by ice-strewn Zanskar River.

The monastery will eventually have a road built up to it, but for now, it is a day’s walk from Village Cha or Village Khangsaar, the terminus of the route heading from Padum. In 2016, a group of Global Himalayan Expedition (GHE) participants helped to solar-power the Phugtal monastery. Phugtal A gompa (monastery) is a dreamlike retreat that may instil in you a deep sense of peace and tranquilly. Phugtal is derived from the Zangskari words Phug, which means ‘cave,’ and tal, which means ‘at leisure.’ The variant spelling of the monastery’s name is Phuktal, which means “freedom.”

The Phugtal Gompa is built around a natural cave that many sages, academics, translators, and monks are said to have visited approximately 2,550 years ago.

The monastery’s secluded setting was excellent for monks seeking peace and alone to reflect. Jangsem Sherap Zangpo, a pupil of Je Tsongkhapa, founded the current Phugtal Gompa, a Gelug school of Tibetan Buddhism, in the early 15th century. Tsongkhapa was the founder of Gelug Buddhism, which is one of Tibetan Buddhism’s newest schools.

The 16 Arhats, or fabled disciples of Buddha, are said to be among the cave’s original dwellers. The cave walls are covered with depictions of these 16 Arhats. The cave is said to have housed the renowned academics and translators Padmasambhava and Phakspa Nestan Dusdan, as well as the famous leader and translator Lama Marpa Lotsawa. Zanskar Lotsawa Phagpa Sherab, a Tibetan translator, also lived and worked in Phuktal in the 12th century.

At Phuktal, the famous academics and brothers Dangsong, Pun, and Sum, who were said to have the magical ability to fly, imparted Dhamma’s teachings. The three brothers donated the sacred spot to Jangsem Sherap Zangpo when he arrived at Phugtal Gompa.

Legend has it that the spiritually endowed Zangpo forced a spring to form and flow from the cave, a tree to sprout on top of the cave, and the cave itself to grow larger. The monastery’s current edifice was then erected around the cave under his direction. It resembles a honeycomb and is constructed on the cliffside. The cliff is part of a lateral canyon of a large Lungnak River tributary. Today, the monastery contains a large temple, prayer halls, a library with rare holy manuscripts, apartments and living quarters, teaching facilities, a kitchen, and, of course, the original cave and sacred spring, which are both preserved.

There is a stone inscription commemorating Alexander Csoma de Krös’ visit at Phugtal Gompa between 1826 and 1827, when he explored Ladakh and worked on the first English-Tibetan dictionary.

The Phugtal Gompa runs a Traditional Tibetan medical facility for the benefit of the surrounding community. On-site Amchi, a traditional Tibetan physician, delivers natural Sowa-Rigpa medication, many of which are manufactured inside the monastery itself. The monastery is the centre of village life in the Lungnak Valley. Monks from the monastery execute traditional prayer rites at important community events such as births, funerals, and marriages. The locals come to the monastery to worship, consult the Amchi, and participate in festivals and special festivities.

The monastery and the community have remained untouched by contemporary development. In July 2016, the Monastery was electrified thanks to the installation of solar micro-grids by Global Himalayan Expedition.

Hardcore travellers should visit Phugtal Gompa, which is located in a remote part of Zanskar Valley. To get there, take a two-and-a-half-day walk from Srinagar or Leh to Padum, then continue on to Phugtal. On this journey, you’ll pass via Rera, Pepula, and Purne. To get to the monastery, you can ride a donkey or a horse. It takes roughly six to eight hours to travel this road.

Festivals are a big aspect of the Phugtal Gompa’s culture. The monks have opportunities to connect with the locals, and the villagers have opportunities to visit the monastery. They contribute to the preservation of centuries-old traditions and the dissemination of dharma. They also help monks earn good karma for the future life by allowing them to make offerings, worship, pray, and serve.

Starting at the end of February, the festivities of Phugtal Gompa are as follows. Because the Tibetan calendar is a lunisolar calendar, the dates for these festivals change from year to year, unlike the Gregorian calendar.