Home Arts & Entertainment Culture The Crooked Forest : Mysteries that were hidden from the world 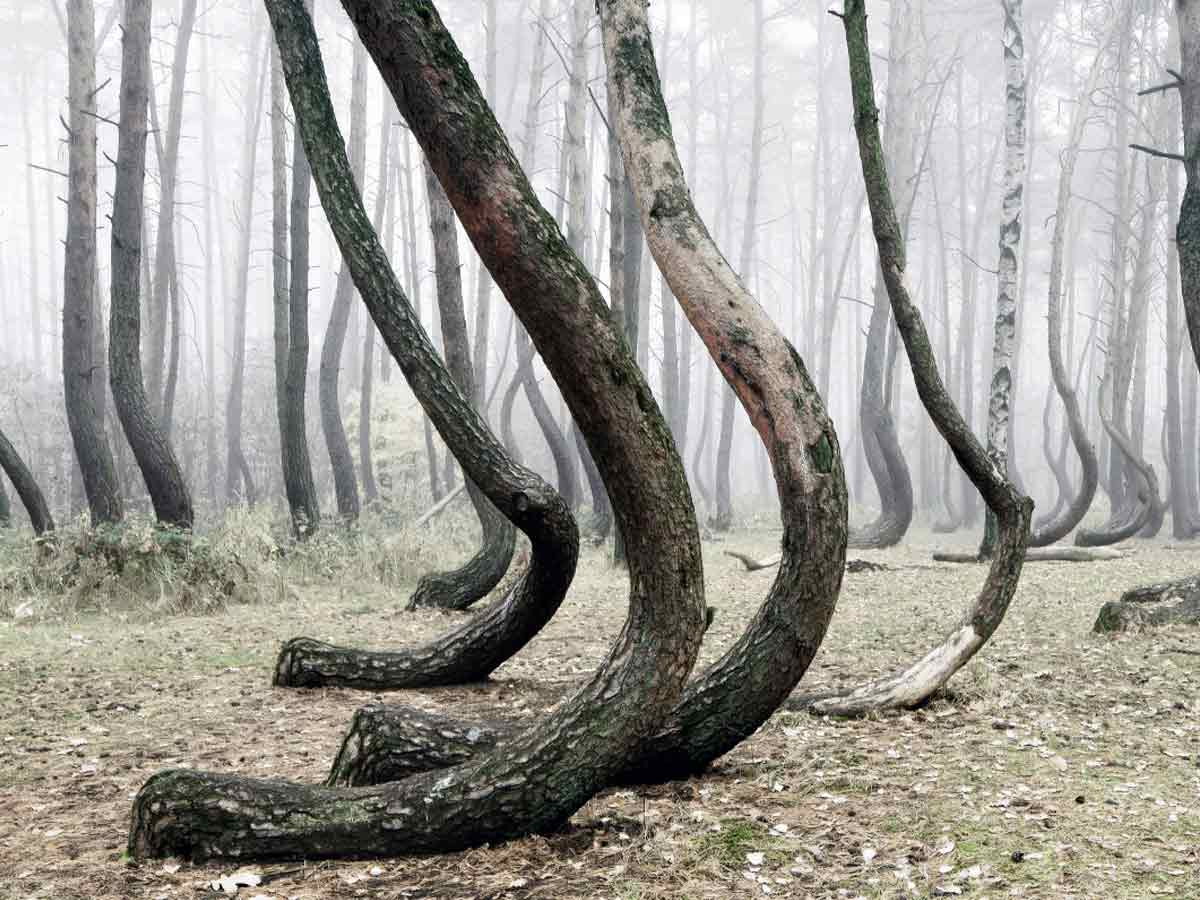 The Crooked Forest is a grove of unusually shaped pine trees in the village of Nowe Czarnowo, near the town of Gryfino in West Pomerania, Poland. It is a Polish-protected natural monument.

This 400-pine grove was planted around 1930 in the village of Nowe Czarnowo. Each pine tree bends sharply to the north, just above ground level, then curves back upright after a three to nine-foot sideways excursion (1–3 m). The curved pines are surrounded by a forest of straight pine trees.

It is widely assumed that a human tool or technique was used to cause the trees to grow or bend in this manner, but the method has never been determined and remains a mystery to this day.

That is one of the reasons why this forest appeals to mystery seekers. The Crooked Forest, as it is known in Poland, is a forest of approximately 400 pine trees.

The base of each tree bends at 90 degrees before curving back upwards, indicating that these are not ordinary Pine trees. All of them point in the same direction. A larger forest of straight-growing Pine trees surrounds the Crooked Forest.

The forest contains approximately 400 crooked trees that are approximately 75 years old. They were most likely planted around 1943. The crookedness of the trees can be seen to begin at the bottom of the tree’s trunk. The bend or crookedness begins 10 to 50 cm off the ground and extends to 9.8 meters in length. The crooked trees can be found in small clusters throughout the forest.

Gryfino was mostly abandoned from the early stages of WWII until the 1970s.

So the natives who lived near the forest before the war and may have known the answer to the mystery of the Crooked Forest are likely no longer alive.

The Gryfino Forest’s existence in Poland is unknown. A forester who happened upon the area during an expedition in 1928 was the first to discover it. For many years, scientists have debated why these curved trees exist, with theories ranging from natural causes to deliberate human intervention.

This young forest is located in the country’s northwest and is thought to have been intentionally altered through genetic mutation many years ago. There are numerous theories as to why this occurred, but no one knows for certain. Many people regard the trees as a symbol of Polish culture and identity.

To this day, there are many theories as to why these trees are shaped the way they are; a few of them are listed below.

Though people all over the world have scratched their heads and searched every page of every book in search of the correct answer that could explain the true reason for this crookedness, they have failed miserably. Even though you can hear the various assumptions that people believe could be true.

Also Read: 8 Best works of Girish Karnad That You Must Try

One of the most popular explanations in town is that the bent shape of the trees is the result of local foresters. They planted these trees in 1925-28 intending to use the trunks to make furniture for sale. As a result, they interfered with the natural growth of these trees when they were only ten years old.

They didn’t let the trees take their natural form because of aggressive chopping and badgering, which had a significant impact on their growth. Another very common reason among the locals is that the trees were subjected to a heavy snowstorm. The snowstorm flattened the trees for a long time while they were still young.

The thick layer of snow on the trunks of the trees during their growth spurt. However, most people around the world believe that this explanation is unlikely because the crooked forest is surrounded by numerous pine trees that did not experience any unusual growth spurts.

As a result, interpreting that only certain sections of the forest experienced crookedness or bent structure is highly unusual.

According to some, during World War II’s invasion of Poland, extremely heavy war tanks plowed through the forest. The trees were flattened to such an extent that they grew back crooked. This reason, however, is said to be partially correct. As previously stated, only certain sections of the forest were affected, not the entire forest. However, given that trees live for about 80 years, there is a slim chance that this event occurred.

Northern Poland’s forest is now a popular tourist destination.
People from all over the world come to see this unusual forest and its natural or manmade peculiarities, which are a visual treat.