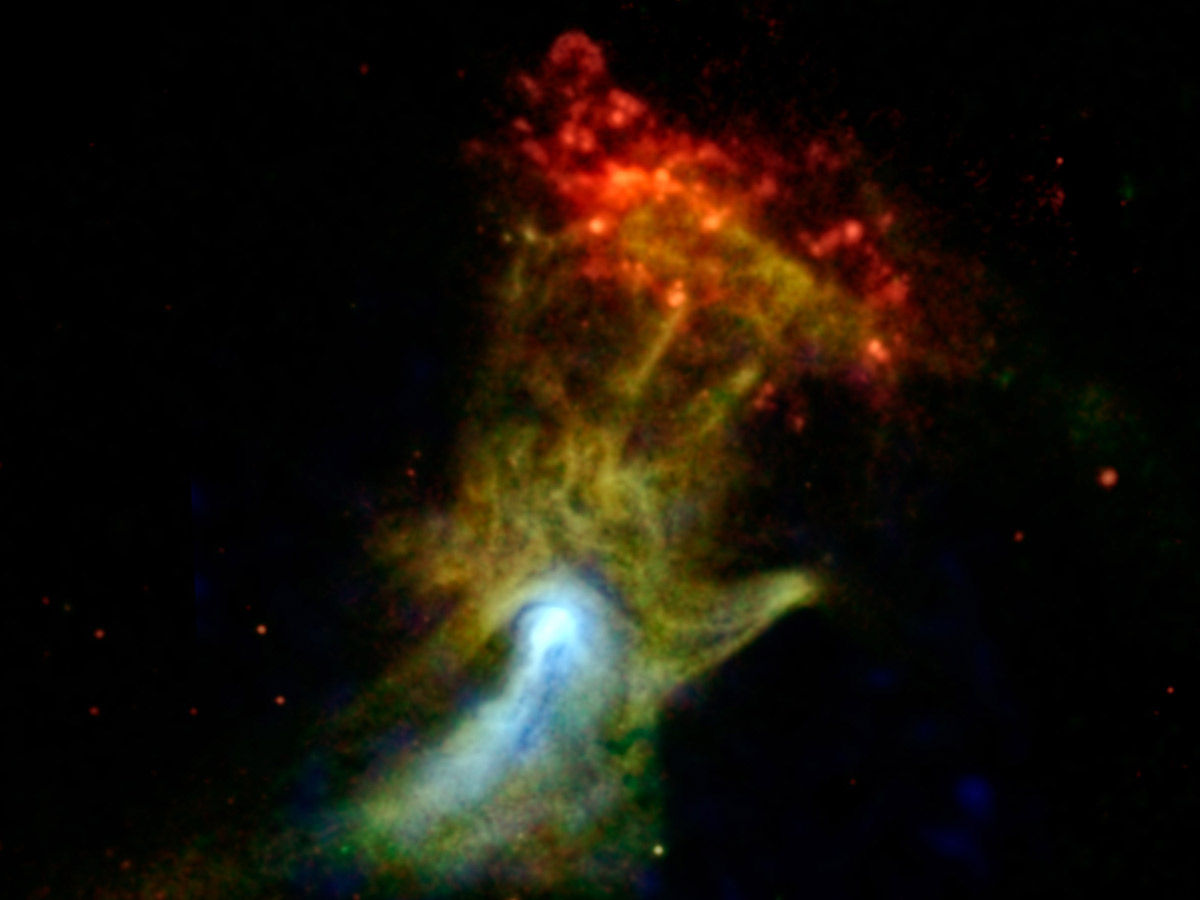 Space enthusiasts and people were left amazed after seeing the image of “Hand of God” that NASA shared. Like any other image shared by NASA, this too created a lot of buzzes, and rightly so. Getting to know something new about space and celestial structures is something that always excites the public. But this time, the excitement was not just because of the name. It was also because of the name that the space agency gave to it- “Hand of God”.

What’s in the Image?

In the image shared by NASA, one can see a golden structure on the background of deep black of space. The arrangement is such that the structure looks similar to a hand. Like in a movie showing mystical beings, the hand-like structure pops out of nowhere, as if conveying a message from the supreme being.

The Explanation of Hand of God:

While commoners were quick enough to call it a message from the Supreme Being, NASA explained what could have led to the formation of the structure. According to the American space agency, the golden structure is actually a nebula of energy and particles blown by a pulsar. The pulsar was left behind after an explosion of a star. NASA has named the pulsar PSR B1509-58.

The pulsar has unique properties that separate it from normal celestial bodies. It is continuously spinning around itself with a speed of 7 spins per second and is 19 kilometres in diameter. The pulsar, or the “Hand of God” is 17,000 Light Years away from earth.

Despite all the scientific explanations given by the space agency, the focus of general people is directed at the image and this is giving birth to a very interesting discussion about the supreme being. Some like to identify it as the “hand of Midas”, some others like to call it the third eye of Lord Shiva. Everyone believes they are correct, but we are still waiting to get more info about the structure from NASA. It is the “God Particle” moment of 2021. The image shared by NASA has gone viral all over the world and with every single new view, we get to listen to a new story from a new point of view about the structure.

The post was actually shared by NASA in 2014, but it’s still enough to create a buzz among the believers. The structure visible on the image looks like something that we have grown up seeing in various shows related to gods or mythological beings.

Also Read, Incredible image captured from space of the Aurora Australis, the Full…

The pulsar that led to the formation of the structure wasn’t clearly visible. It remains hidden behind the bright white spot. Scientists are yet to gather complete information regarding the exact cause behind the creation of the shape. Whether the hand-like structure was created itself or because of its interaction with the pulsar particles, is the larger question.

The image was captured by NASA’s NuSTAR X-Ray telescope. In the image captured by the telescope, the hand appears to have shrunk. It looks like more of a fist than an open hand. Scientists also believe that the northern area, where the fingers are located, is a lot different from the southern area, where the jet exists, as the structure appears to have shrunk more in the northern area.

There’s also a red cloud visible in the image. It has been named RCW 89 by NASA. Astronomers believe that the pulsar’s winds are heating the cloud, creating a glowing effect. The clouds appear to be glowing because of this.

To look at it in scientific terms, the “Hand of God” is an example of pareidolia. Pareidolia is the psychological phenomenon of perceiving familiar shapes in random or vague images.