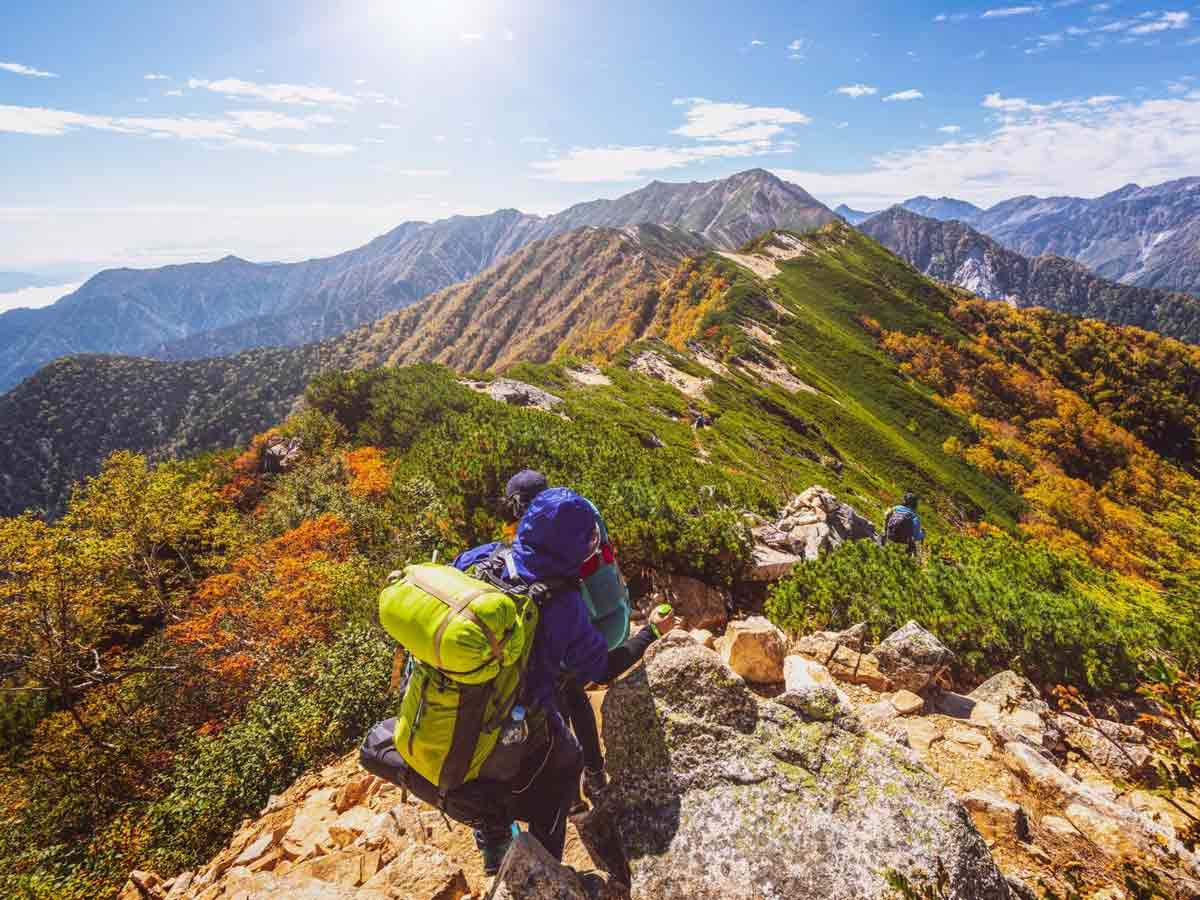 The best treks in Japan immerse you in the country’s incredible forests, mountains, and rivers while also showing its distinct culture – from its distinctive architecture to the spirituality and mythology that drives it.

Many of best treks in Japan are old pilgrimage paths that take you from shrine to shrine, through gorgeous woodlands, or to the top of a mountain range. Japan Treks allows you to gently discover one of the world’s most spectacular countries on foot if you know where to look.

Here are seven of the best treks in Japan to get you started.

The Japanese Alps are the Hida Mountains, Kiso Mountains, and Akaishi Mountains that span across Japan, bisecting the island of Honshu, the country’s largest and most populous island. Reverend Walter Weston, an English missionary regarded as the “Father of the Japanese Alps,” popularised the term. A memorial honouring him can be found in Kamikchi. The trekking in the Alps is numerous, but this climb to the high peaks is a true bucket list experience.

It’s worth noting that this isn’t a one-day excursion but rather a multi-day journey (or lots of day hikes). Mt Yarigatake stands 3180m tall and is shaped like a spear, hence its name (‘Yari’ translates as a spear). The ascent takes you through lush forests and rivers until you reach the genuinely harsh peak, from which you can see the 15 mountains that comprise the Japanese Alps. The walk will lead you to Okuhotaka over the renowned Daikiretto Gap, a treacherous road with high drops.

It’s not for the faint of heart, yet the gap offers unrivalled vistas of the unique Alp mountains. The next morning, an early rise brings you to the summit of Mt Okuhotaka, Japan’s third tallest mountain, with some iron ladders for aid, and then it’s down to Kamikchi. This is a very adventurous, hilly hiking route – and one of the best walks in Japan, in our opinion.

2. HIKE THE NAKAHECHI ROUTE ON THE KUMANO KODŌ PILGRIMAGE TRAIL

The Kumano Kod hiking routes capture Japan’s tradition, history, and natural beauty. Emperors and samurai regularly followed the road, who revered it and left extensive chronicles of their journeys here from Kyoto. Because of this and the breathtaking scenery, the pilgrimage route was designated a UNESCO World Heritage Site in 2004, one of only two in the world, the other being the famed Santiago de Compostela route, which ends in Spain.

The Kumano Kod is a network of pathways, the most popular of which being the Nakahechi Route, which traverses the three main Shinto shrines of Kumano that pilgrims would traditionally visit. On the Kii Peninsula, Tanabe serves as the beginning point for the Nakahechi path, which serves as the entrance to Kumano.

From there, it’s on to ancient pine trees, little villages, forest trails, breathtaking overlooks, Japan’s largest waterfall, and some gorgeous Japanese architecture. The trail is about 70 kilometres long and is often completed in four to five days.

Mount Fuji is well-known throughout the world. The dormant volcano is named after the Buddhist fire deity Fuchi. It has a temple to the Shinto goddess Sengen-Sama at its peak. The pilgrimage route up Mount Fuji runs through sacred woodlands home to Shinto shrines and Buddhist monasteries. If you only have a few days to go hiking in Japan, this is a must-do.

The climbing season for Fuji is in July or August when most of the snow has melted. However, you may still do a portion of the Fuji hike all year. The Fuji climb has ten stations along the way, with the first at the mountain’s base and the tenth at the summit. Many people visit one of the four ‘fifth stations,’ and the journey to this point is a magnificent hike in and of itself. If the sky is clear, you may see the five lakes of Fuji from here: Lake Kawaguchiko, Lake Yamanakako, Lake Saiko, Lake Motosuko, and Lake Shojiko.

Mount Takao, at 599 meters, is located within the boundaries of metropolitan Tokyo. Takao Station on the JR Chuo Line is only a 50-minute train ride from Tokyo’s lively Shinjuku district. You can take a funicular halfway up Mount Takao or walk from top to bottom for roughly an hour and a half. The most famous path up is the Omotesando Trail.

It’s mostly paved and takes you to all of the major attractions. It does, however, become extremely congested. The Biwa Waterfall Trail, at 3.3km, is a wonderful alternative and perhaps the most difficult path up. You’ll go past a waterfall, a monastic retreat, and along lovely forest roads.

The Inariyama Route is also worth a look – an unpaved 3.2km climb over Mount Inari. It’s renowned as the “every-season trail” because the lovely vegetation can be found all year. The Biwa Waterfall Trail (also known as ‘Trail 6’) and the Inariyama do not pass via the ropeway or funicular stations, which can be interesting. Still, they are also substantially less busy than the Omotesando Trail.

Going up one of the less-travelled trails and returning to the main trail can be a good compromise. The mountain is home to wild boars, monkeys, and around 1,200 plant species. It is also one of the termini of the 1,054-mile Tokai Nature Trail, which runs from Mount Takao to Minoh.

5. HIKE THE SEVEN WATERFALLS OF KAWAZU

Hiking in Japan is often associated with enchanted forests, mesmerizing rivers, old legends, and stunning waterfalls. If that’s what you’re looking for, this seven waterfall trek in Kawazu is one of the top Treks in Japan.

This route winds through native beech forest and farms until it reaches the waterfall trail, deep in the Amagi Highlands. The seven ranges in height from the Odaru, which drops 30m, to the Kanidaru, which drops only two.

There are wild swimming holes and hot springs along the way. The trail is culturally linked by setting to the work of Nobel Prize winner novelist Kawabata Yasunari, who immortalized the area in his story “The Izu Dancer.” Along the delightful walk, you’ll see monuments of the heroine of this short novel. This is a reasonably short one or two-hour hike that encompasses the beauty and culture of Japan.

If our previous two entries were a little too brief for you, perhaps the Shikoku Henro Pilgrimage trail is more your speed – one of the world’s few circular pilgrimages, the route spans 750 miles and visits over 80 temples along the way, as well as numerous other sacred sites where Ku-kai (or ‘Kb Daishi,’ founder of the esoteric Shingon school of Buddhism and one of the religion’s most important figures) is believed to.

Throughout that distance, you’ll witness the best of Shikoku, Japan’s smallest main island, from the forests and rivers to the culture, and gain a feel of the spirituality that drives the island. There are numerous hiking opportunities. The Shikoku Henro Pilgrimage might take up to six weeks to complete when walking from Temple 1, Ryzenji in Tokushima. It’s a journey of unhurried travel, self-discovery, and breathtaking natural beauty.

With the most usual route following the sequence of the temples, it’s also simple to arrange a part-route trip, such as walking from temples 13-17 or 71-77, to construct a less time-consuming trekking path.

7. HIKE UP MIYANOURA ON THE ISLAND OF YAKUSHIMA

Yakushima is an island in Kagoshima Prefecture known for its cedar forests, home to Japan’s oldest trees, and its diverse wildlife, including red-bottomed macaques, sika deer, Japanese raccoon dogs, and Japanese weasels.

The woodlands are now a national park, and they were designated as a Natural World Heritage Site in 1993. Locals joke that it rains “35 days a month” here, but as you can guess, all that forest, rain, and flora and animals create some breathtaking and extremely distinctive sights.

The trek up Miyanoura, at 1936m, is nowhere near the Japanese Alps or the heights of Fuji. Yet, it’s one of the best Treks in Japan because of the lovely trees and so uniqueness. The journey begins with a steep vertical and proceeds through various woodlands before reaching the 360-degree vista at the top. You’ll come across Jomon Sugi, the forest’s tallest and oldest cedar tree, estimated to be between 2,170 and 7,200 years old (quite a range!). This is the Japan Trek route for you if you enjoy trees and want to on an off the beaten path.

Hike from hut to hut, summit two peaks, wake up in the clouds, relax in hot springs, and return to Tokyo’s dazzling lights.