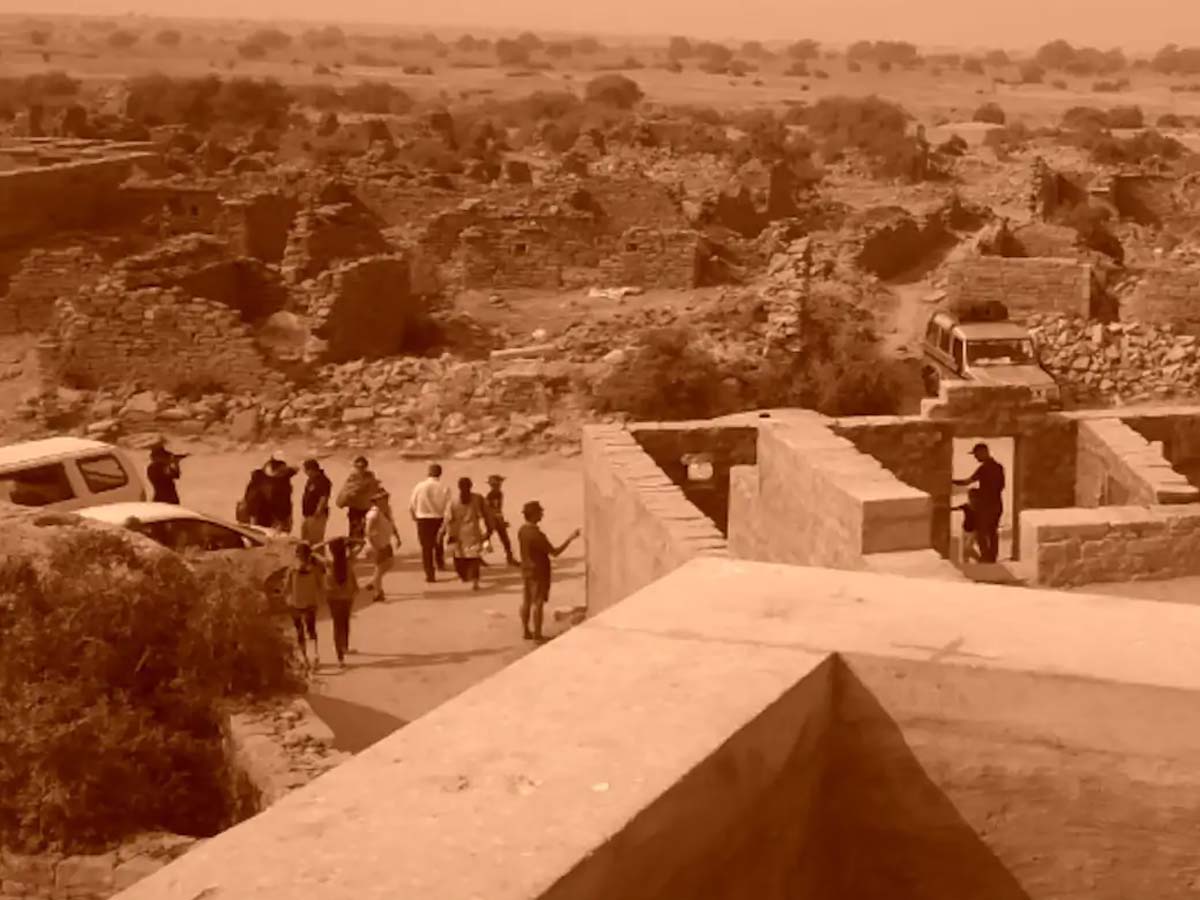 Kuldhara is located about 20 kilometers west of the Rajasthan desert town of Jaisalmer.

When we drive down the dirt path that leads to it, we noted how few people there are. The grass is sparse – the meek stray goats have most likely devoured the last remnants. When we arrived at the town’s ruined gates in the afternoon, the heat is scorching. Kuldhara is bleak, and there is an unearthly silence all around. The residents of this village left 200 years ago.

Kuldhara village, located 21 kilometers from Jaisalmer in Rajasthan, has a similar tale to tell. Kuldhara Village is now a heritage site managed by the Archaeological Survey of India (ASI).

As you reach the grounds of this ancient settlement, it seems as if time has stopped in Kuldhara for the last 200 years. 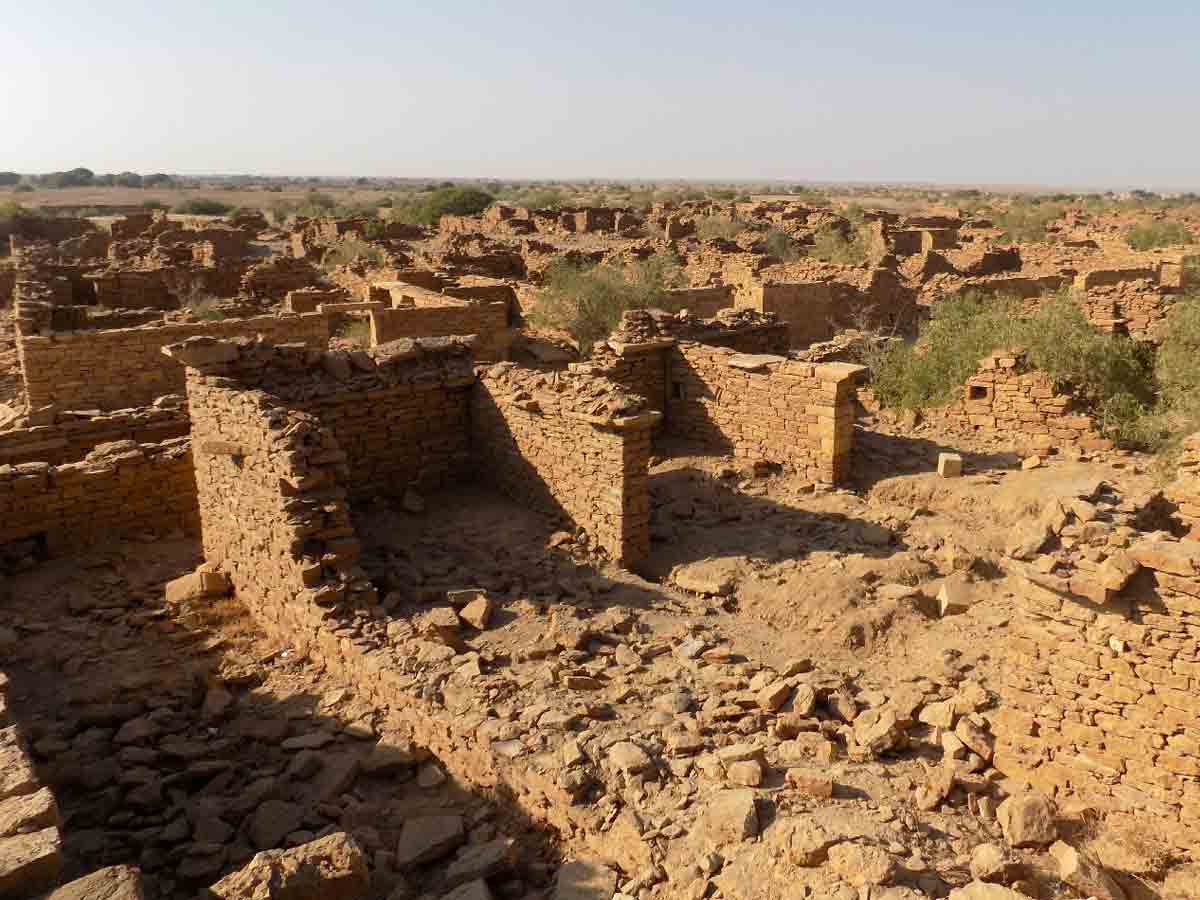 Straight dusty roads with occasional rows of mud homes, cul-de-sac lanes, and sandstone walls, as well as a temple once visited by the Paliwals, stand as living testaments to any tragic history. The dried river bed of Kakni lies to the east of the village, a warning to the impossibility of life sustenance in this area.

A once-thriving village in North-Western India with a tradition dating back to the 13th century was deserted overnight in 1825 for unexplained reasons. As you walk through the ruins of Kuldhara village, you can see the effects of time on the earth.

However, there is no supernatural truth behind the myth. Still, a curtain of sorrow rends the weather, narrating its inhabitants’ unfortunate history, who were forced to flee their ancestral home under the cloak of night.

Jaisal Bhati founded Kuldhara Village in 1156 atop the Trikuta Hill in Jaisalmer, Rajasthan.

The justification for establishing a city in such a location was that the original capital, Lodarva, was under siege by enemies.

Trikuta Hill’s area had a good trading route with Persia and Arabia in the Middle East, both by land and via Gujarat’s ports. As a result, they raised a lot of money from the taxes imposed on caravans traveling from these places to Rajasthan.

Following that, the invaders traveled from Afghanistan. They used this route to loot Gujarat’s riches, specifically the Somnath Temple, which was renowned for its properties. To defend themselves from the attackers’ assaults, the villagers deserted Kuldhara and its neighboring settlements, as men, women, and children were kidnapped and enslaved by the intruders. 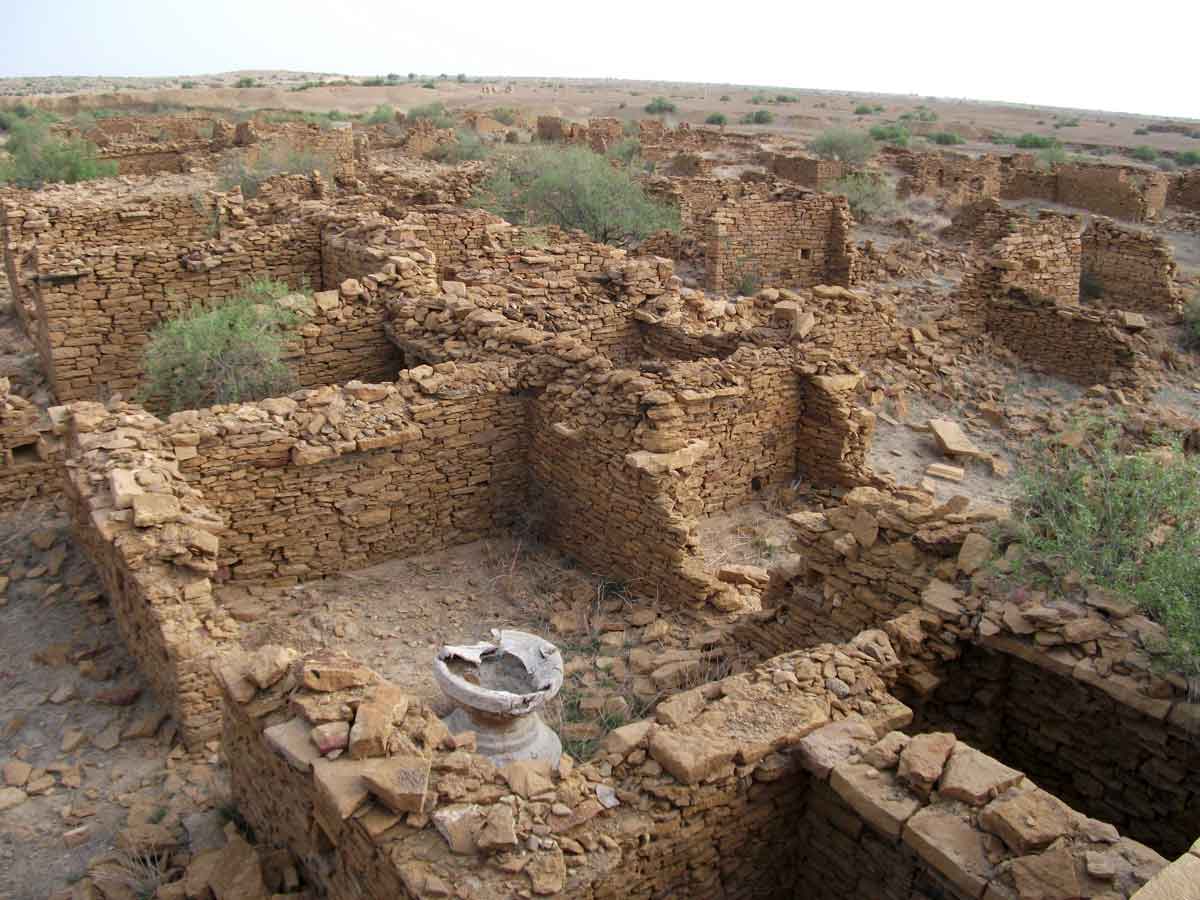 The best time to visit Kuldhara Village is between October and March when the weather is cooler. You can go sightseeing without being tired. Rajasthan, being a desert area, remains extremely hot for the majority of the year.

Also Read about Bhangarh Fort, The stories behind India’s most haunted fort

Over the winter, the weather is bitterly cold, making sightseeing difficult.

The Story of Kuldhara

This remote village of Kuldhara, Rajasthan, has been abandoned since the 19th century and is about 18 kilometres (12.4 miles) southwest of Jaisalmer. This village was littered with hundreds of dilapidated sandstone houses and dirt roads. This village’s remains are said to be cursed and haunted, giving it an air of decay while concealing a hidden mystery that must be revealed.

Kuldhara was established in the 13th century by an influential clan—the Paliwal Brahmins. It was once a thriving village with over 1,500 inhabitants and 400 homes, but it is now a desolate and ruined ghost village. The inhabitants of the area and 83 other settlements nearby mysteriously vanished in the middle of the night in 1825 and have not been seen again. By the nineteenth century, all peasants had disappeared into thin air, leaving only their memories and an unbreakable curse behind. 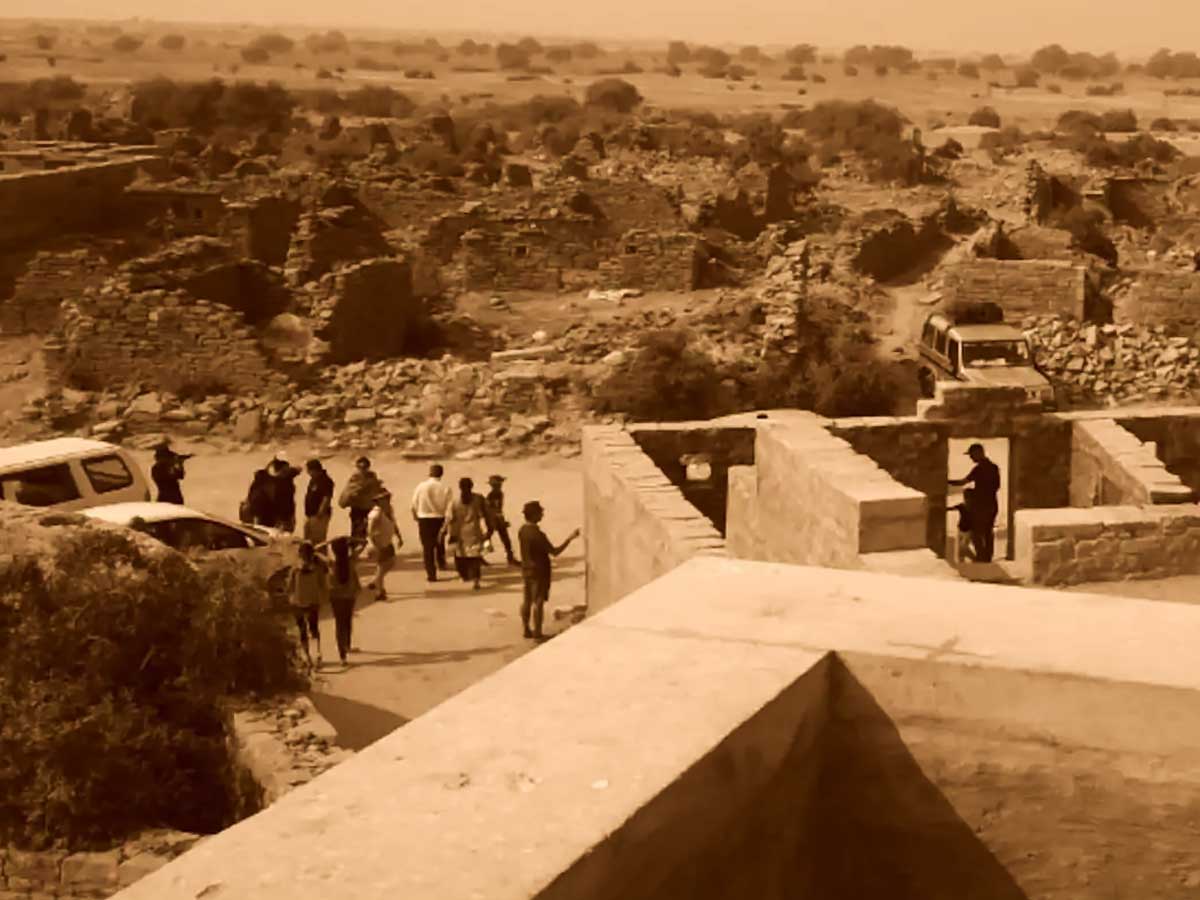 Since then, no evidence of the Paliwal culture of Kuldhara has been discovered. Historians are perplexed by the mass loss of over 1,500 individuals with no trace. This town is now preserved as a heritage site by the Archaeological Survey of India.

Since then, no evidence of the Paliwal culture of Kuldhara has been discovered. Historians are perplexed by the mass loss of over 1,500 individuals with no trace. This town is now preserved as a heritage site by the Archaeological Survey of India.

This Rajasthan village’s legend revolves around the former Prime Minister of Jaisalmer, Salim Singh, who fell in love with the village chief’s daughter. He threatened the villagers and her family with a massive tax if they did not consent to his demand. Fearing the imposition of excessive taxation, the town’s inhabitants and the surrounding 83 villages voted to leave the town to preserve the girl’s honor, leaving only their homes behind.

However, before leaving the village, they cast a spell that no one will ever live there again, causing its demise and adding to the eerie atmosphere. It is said that those who attempted to live on this land encountered paranormal activity and soon fled. The spell is still in effect today, and the village is deserted. The brick houses left behind by the town’s residents have deteriorated, as have the cluster of wells and deity-engraved poles in the field. 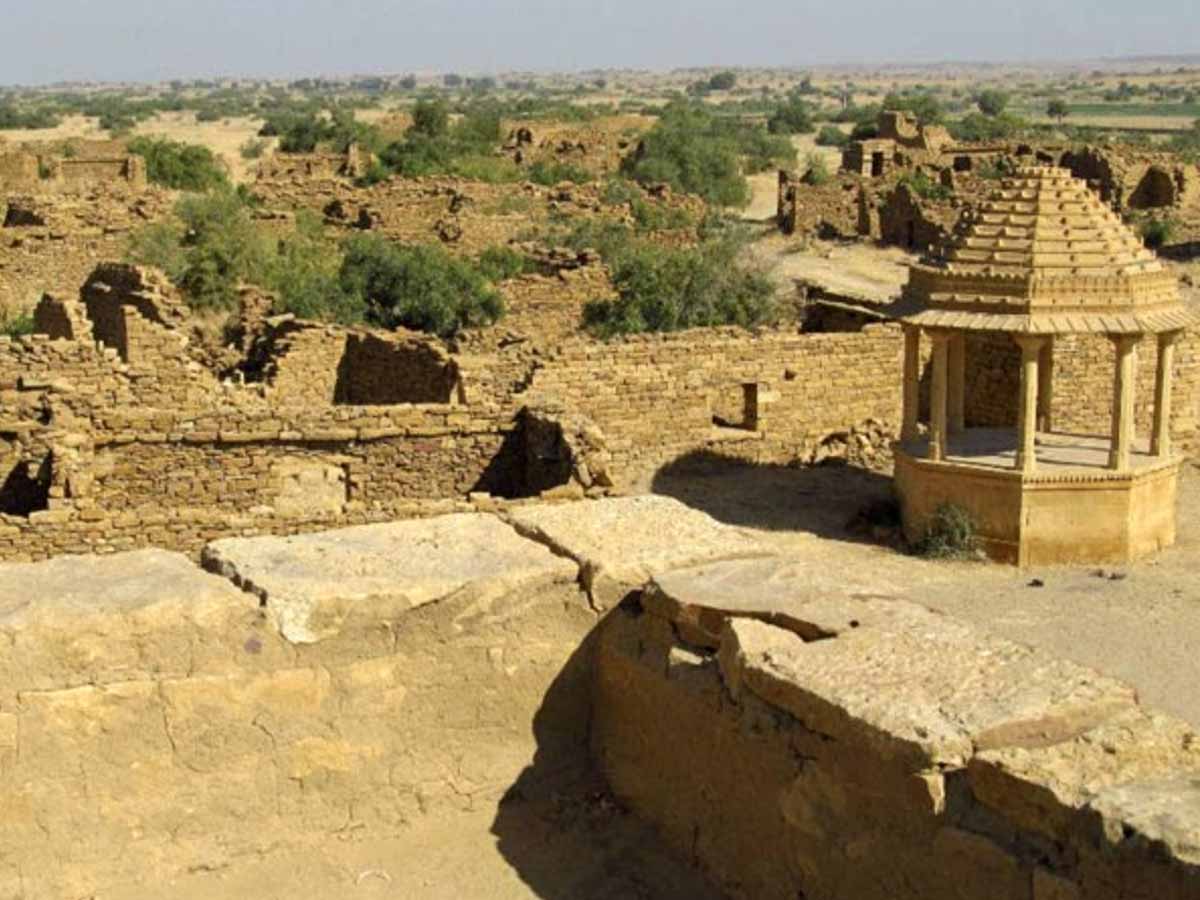 Kuldhara has been designated a Heritage Site by the Archaeological Survey of India. It now serves as a tourist destination, even though its condition is deteriorating. The nearby villagers shut the gates of Kuldhara as the sun sets, believing that dark forces take over when the sun goes down. The Paranormal Society of New Delhi itself experienced eerie activities such as haunting sounds, footsteps in the dirt, creeping figures, scratches on vehicles, and more, demonstrates the scope of supernatural/paranormal activity.

However, its ancient ruins, strange and eerie events, and tragic tales continue to draw visitors, even though entry to the village is only permitted during daylight hours. In the middle of the ruins, there is a restored temple that still stands. The Rajasthan government is re-building this long-lost town to get it back to life.