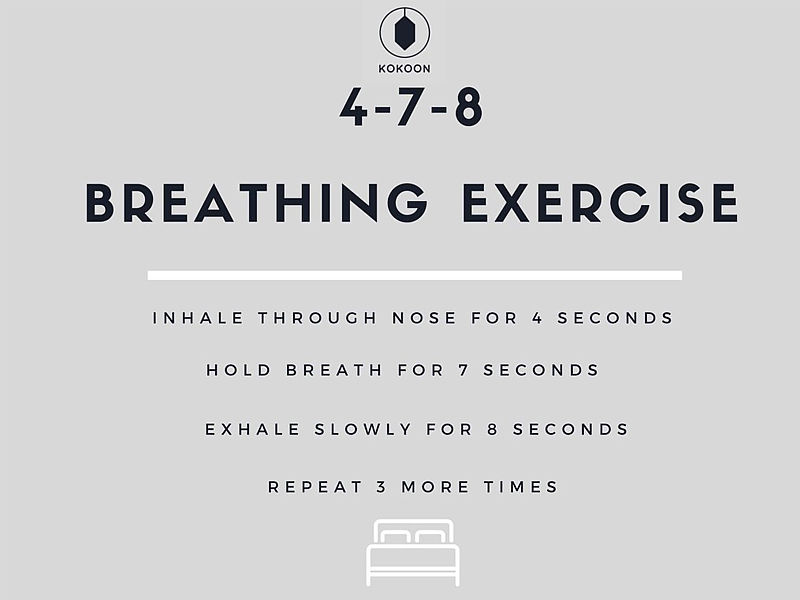 Breathing in for 4 seconds, holding for 7 seconds, and exhaling for 8 seconds is the 4-7-8 breathing technique, also known as “relaxing breath.”

This breathing pattern is intended to help people relax or fall asleep. Some supporters claim that the method allows people to fall asleep in under a minute.

Although there is little scientific evidence to support this method, anecdotal evidence suggests that this type of deep, rhythmic breathing is relaxing and may help people fall asleep.

We’ll look at how to use this breathing technique, why it might work, and apps that can help in this article.

The 4-7-8 breathing technique requires a person to concentrate on inhaling and exhaling long, deep breaths. Rhythmic breathing, which promotes relaxation, is an important part of many meditation and yoga practises.

Dr Andrew Weil teaches the 4-7-8 breathing technique, which he claims can help with:

Dr Weil is the founder and director of the University of Arizona Center for Integrative Medicine, as well as a celebrity doctor.

How to Go About It

Adopt a comfortable sitting position and place the tip of the tongue on the tissue just behind the top front teeth before beginning the breathing pattern.

Focus on the following breathing pattern to use the 4-7-8 technique:

Empty the lungs of air by breathing in quietly through the nose for 4 seconds, holding the breath for 7 seconds, then exhaling forcefully through the mouth for 8 seconds, pursing the lips and making a “whoosh” sound.

To see the benefits sooner, doctors recommend using the technique at least twice a day. He also advises people not to do more than four breath cycles in a row until they’ve gotten more comfortable with the technique.

After the first few times of doing this, a person may feel lightheaded. As a result, it’s a good idea to use this technique while sitting or lying down to avoid dizziness or falling.

The ratio is more important than the total number of seconds that the pattern lasts. If a person can’t hold their breath for long enough, they can try a shorter pattern like:

2 seconds of breathing through the nose

Hold your breath for 3.5 seconds and then exhale through your mouth for 4 seconds.

After several days or weeks of doing 4-7-8 breathing consistently one to two times a day, a person may notice benefits as long as they maintain the correct ratio.

According to some 4-7-8 breathing proponents, the more time and frequency a person practises the technique, the more effective it becomes.

Clinical evidence to back up these claims about 4-7-8 breathing or other breathing techniques is limited. Anecdotal reports from satisfied users are the only source of evidence.

What it is and how it works

Deep breathing techniques appear to have a positive effect on a person’s anxiety and stress levels, according to some evidence.

asthma symptoms in children and adolescents are reduced, and stress management is improved.

According to a reliable source, practising pranayamic breathing, or breathing that focuses on controlling breath movement, for six weeks can improve a person’s heart rate variability, which is linked to stress, as well as cognition and anxiety.

Certain breathing techniques, such as 4-7-8 breathing, have been linked to other relaxation techniques. Some people combine the following practises with their breathing:

imagery that has been guided

muscle relaxation that is progressive

prayer that is repeated

Yoga, tai chi, and qigong are some of the most popular forms of exercise.

The most common applications of 4-7-8 breathing are for stress and anxiety reduction. It is said to become more effective as a person uses it more frequently in helping them manage their stress levels.

Anti-anxiety medications, on the other hand, tend to lose some of their effectiveness over time as the body adjusts to them.

Which apps can I use to practise breathing in the 4-7-8 range?

People who want to try breathing techniques but aren’t sure if they can self-regulate might benefit from using an app. Apps for various devices are available in the Apple and Google Play stores.

Breathe, for example, is a free Apple app that helps people practise the 4-7-8 breathing method. The app has received positive feedback from those who have used it. It also has a feature that allows you to set reminders to use it throughout the day.