Fatehpur Sikri is a town in the Agra District of Uttar Pradesh. Fatehpur Sikri, 37 kilometres from Agra’s district headquarters, was founded as the Mughal Empire’s capital in 1571 by Emperor Akbar and served in that capacity from 1571 to 1585 when Akbar abandoned it due to a campaign in Punjab and was later completely abandoned in 1610.

The name of the city is derived from the previous village of Sikri, which occupied the location.

Before Akbar built his capital, there were habitation, temples, and commercial centres here, according to an Archaeological Survey of India (ASI) excavation from 1999 to 2000. Sungas colonised the area after their expansion. It was ruled by Sikarwar Rajputs from the seventh to the sixteenth centuries CE, until the Battle of Khanwa (1527).

Buland Darwaza literally translates to “magnificent gate” in Urdu, and the structure stands 54 metres tall. Emperor Akbar built it in 1601, to commemorate his victory over Gujarat. The doorway’s architecture is one-of-a-kind, and the craftsmanship is superb.

Buland Darwaza is a red sandstone structure with carved marble and granite inlays. An inscription in Persian on the main gateways reads, ‘Jesus son of Mary said, “The world is a bridge; pass over it, but build no houses on it.” He who hopes for a day may wish for eternity, but the World lasts only an hour. Spend it in prayer, because the rest is unseen.”‘

The Diwan-i-Khas (private audience hall) is one of Fatehpur Sikri’s most ornate structures. The central tower, also known as the Lotus Throne, is one of the most exquisite things to see here, exemplifying the fine detail in this stone-carved mastery.

The pillar supports a walkway that connects the first floor’s four corners to a central circular platform intended for Emperor Akbar. The hall was intended for special people and religious leaders who desired or were summoned to meet with the Emperor privately.

The palace, also known as Mariam-uz-Zamani Palace, was the residence of Mughal Queen Jodhabai. Jodhabai Palace was also thought to be the Emperor’s Harem, where the other women of the royal harem lived.

Nonetheless, due to its amazing architecture, the building is one of the most important buildings in the complex. Because Jodhabai belongs to the Hindu Rajput clans of Amer, the architecture is a rich amalgamation of Hindu Rajputana styles and Islamic Mughal styles (Jaipur).

The Tomb of Sheikh Salim Chisti

The tomb of Sheikh Salim Chisti, which was built between 1580 and 1581, is arguably the most important structure in the palace complex. The structure is made of carved white marble and is one of the finest examples of mediaeval India’s artistic stone carving mastery.

The architecture is a hybrid of Hindu and Mughal styles, and it is surrounded on all sides by intricately carved marble screens known as ‘Jaalis.’ Salim Chishti, a Sufi saint who lived on a ridge near the city, is buried in the mausoleum. During its existence, the city was one of the major centres of the Sufi movement in India.

Panch Mahal is made up of five stories built in a pyramidal structure and supported by a total of 176 columns. Originally, the pillars were separated by stone carved meshes or Jaalis and were most likely intended for the women of the nearby Zanana enclosure. All of the columns are intricately carved in sandstone.

The structure is also known as the ‘Badgir’ or wind catcher tower, and the pool in front of it is called Anoop Talav. This structure’s main purpose is known to be entertainment, and it was frequently used for various theatrical, musical, and dance performances.

Akbar built the Jama Masjid, or central mosque, under the supervision of Salim Chishti. The rectangular structure is made of carved red sandstone.

The interior of the mosque is decorated with stone carved Mirhabs or altars, and it is one of the most valuable collections of Mughal architecture, indicating the transition of Islamic architecture into Hindu-style architecture.

Hiran Minar in Fatehpur Sikri Fort is 1 km from Fatehpur Sikri Railway Station and close to Caravanserai. Hiran Tower is said to have been built in memory of Akbar’s favourite elephant, Hiran. This tower is also thought to have served as a milepost and a lighthouse for night travellers.

Hiran Minar stands 21.34 metres tall and is octagonal on the ground level and circular on the rest of the tower. This is built on top of an octagonal platform, which is supported by a square base. A row of hexagons and six-point stars adorn this tower. Previously, elephant tusks protruded from the centre of each star, but these have been replaced with stone.

The exterior and interior of the palace are beautifully ornamented with carvings and have balconies on each side. This structure is thought to have been the residence of two Turkish queens of Akbar, Salima Sultan Begum and Ruqayya Begum. The Turkish queens attached to the pond most likely used it as a pleasure pavilion. 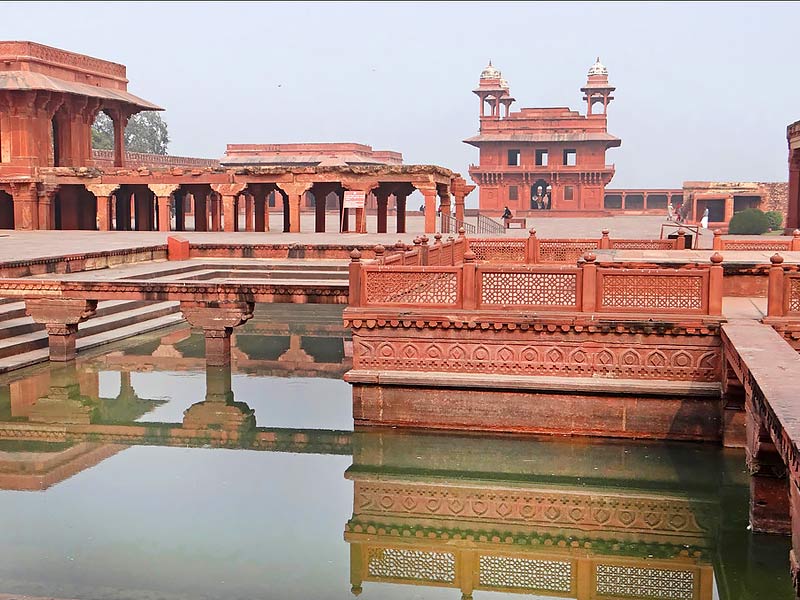 This is a square structure with floral and geometric patterns etched into it. The main chamber is one of the harem complex’s ornately decorated structures. Richly carved panels, pilasters, columns, friezes, and brackets make up the structure. A verandah connects it to the ground floor of the Khwabgah complex, and it has a portico in the west.