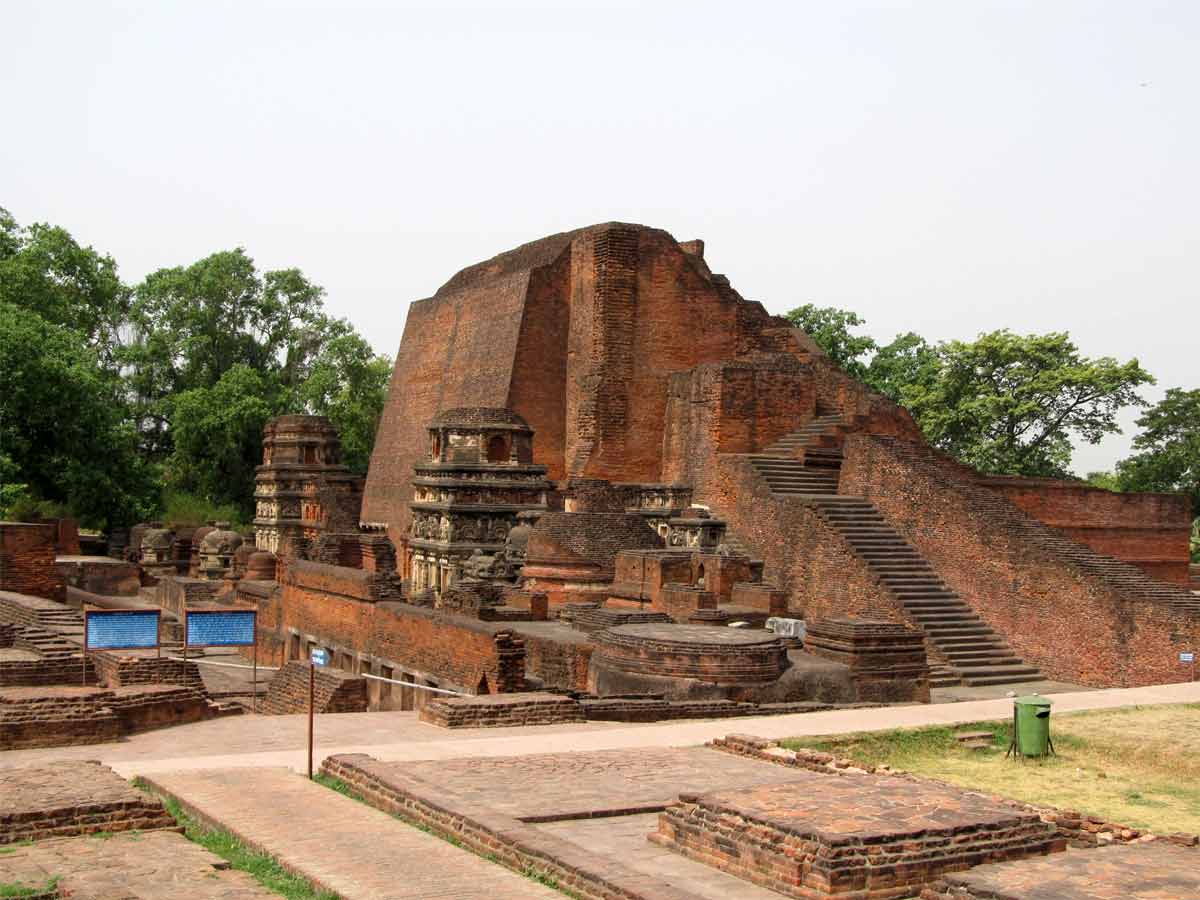 In ancient Magadha (modern-day Bihar), India, Nalanda is a prominent Buddhist monastic academy. It was near the city of Rajagriha (now Rajgir) and around 90 kilometres southeast of Pataliputra, and operated from 427 to 1197 CE. Historians consider it to be the world’s first residential university and one of the finest centres of learning in the ancient world.

During the Gupta Empire, Nalanda was founded with the help of several Indian and Javanese benefactors, including Buddhists and non-Buddhists. Its faculty featured some of Mahayana Buddhism’s most illustrious academics throughout the course of 750 years.

The Hindu Vedas and its six philosophies, as well as grammar, medicine, logic, and mathematics, were taught in Nalanda Mahavihara, as were six important Buddhist schools and philosophies such as Yogacara and Sarvastivada. The university was also an important source of the 657 Sanskrit books sent to China by pilgrim Xuanzang and the 400 Sanskrit texts brought to China by Yijing in the 7th century, both of which inspired East Asian Buddhism.

It was plundered and destroyed by Muhammad bin Bakhtiyar Khalji’s soldiers, then partially rebuilt and survived until around 1400 CE. It is now a recognized UNESCO World Heritage Site.

According to Xuanzang, a Chinese traveller from the early 7th century Tang Dynasty, the name Nland was derived from a Naga — a snake god in Indian traditions–named Nalanda. He suggests that “na-alam-da” means “charity without interruption,” although this divide does not imply this. Hiranand Sastri, the archaeologist in charge of the ruins’ excavation, believes the name comes from the abundance of nlas (lotus stalks) in the area, and that Nalanda represents the giver of lotus stalks.

The history of Nalanda in the first millennium BCE is intertwined with that of Rajagriha (Rajgir), the capital of Magadha and a stopover on ancient India’s commerce routes. On his preregrinations, Buddha is said to have visited a village near Rajagriha named Nalanda, according to early Buddhist writings. He gave talks at a neighbouring mango grove called Pavarika, and Shariputra, one of his two main pupils, was born there and subsequently gained nirvana there.

The names and relative locations of these Buddhist scriptures, which were written down centuries after the Buddha’s death, are inconsistent. The Mahasudassana Jataka, for example, asserts that Nalaka or Nalakagrama is approximately a yojana (10 miles) from Rajagriha, although Mahavastu calls the location Nalanda-gramaka and places it half a yojana distant.

According to chapter 2.7 of the Jaina scripture Sutrakritanga, Nalanda is a “suburb” of Rajagriha, includes various structures, and is where Mahavira (6th/5th century BCE) spent fourteen varshas — a phrase that alludes to a typical monks’ retreat during the monsoons in Indian religions. This is supported by the Kalpasutra, another important Jain book.

However, except from mentioning Nalanda, Jaina scriptures do not give any more information, and they were not written down for about a millennium after Mahavira’s death. This, like Buddhist scriptures, has sparked debate over its veracity and if the contemporary Nalanda is the same as the one described in Jaina literature.

Despite the difficulties in identifying places in Buddhist and Jaina scriptures, Scharfe claims that the current Nalanda is “almost certain” to be the site to which these texts refer.

Excavations around Nalanda, such as the Juafardih site, approximately 3 kilometres distant, have turned up black pottery and other artefacts. Carbon dating has placed them at 1200 BCE. This indicates that a human community existed in the Magadha area near Nalanda hundreds of years before the Mahavira and Buddha were born.

Faxian, also known as Fa-hsien, was a Chinese Buddhist pilgrim monk who visited India in search of Buddhist literature and left behind a travelogue. In the early fifth century, he spent ten years in India, inspiring numerous Chinese and Korean Buddhists to visit the country over the ages, and visiting significant Buddhist pilgrimage sites such as the Nalanda region. Many Buddhist monasteries and monuments are mentioned across India.

He makes no mention of any monastery or institution at Nalanda, despite the fact that he was hunting for Sanskrit writings and bringing a significant quantity of them back to China from other regions of India. The silence in Faxian record, together with the lack of any archaeological findings of pre-400 CE monuments at Nalanda, shows that Nalanda monastery-university did not exist about 400 CE.

The Gupta rulers built Nalanda in the early fifth century, and it grew over the next seven centuries.

The history of Nalanda may be traced back to the 5th century. The founding of a sangharama (monastery) at the site is attributed to a monarch called Shakraditya, according to a seal unearthed at the site. The Chinese pilgrim Xuanzang travels confirms this. Many epithets and names were used to refer to rulers in Indian tradition and scriptures. Scholars like Andrea Pinkney and Hartmut Scharfe have concluded that Shakraditya and Kumaragupta I are the same person.

He was a member of the Gupta dynasty, a Hindu dynasty. Monetary evidence uncovered at Nalanda supports Kumaragupta I’s claim to be the monastery’s first patron.

Harsha (also known as lditya in Buddhist texts) was the most important patron of the Nalanda Mahavihara after the Guptas fell out of favour. He was a 7th-century monarch who ruled from Kannauj (Kanyakubja). Harsha was a third-generation Hindu ruler from the Vaishya caste, according to Xuanzang, who erected grand Buddhist viharas as well as three equally sized temples dedicated to Buddha, Surya, and Shiva.  “A lengthy succession of rulers” had built up Nalanda, he claims (around 637 CE), until “the entire is simply beautiful to behold.”

Muhammad bin Bakhtiyar Khalji’s army damaged and started the destruction of Nalanda and other monasteries nearby, such as the Odantapura Vihar, which was approximately 6 miles from Nalanda. This destruction is supported by three sources, all of which are consistent but contain certain doubts, as well as a little disagreement over the actual date. A Muslim historian provides the first piece of proof.

The second are Buddhist monk documents discovered in Tibet from the 13th century onwards. The third piece of evidence is archaeological, with layers of charcoal deposits discovered covering ruins, Nalanda library fragments, and other damaged artworks.

The first piece of evidence comes from Minhaj-i-Siraj, a Persian historian who describes a pillage and massacre near Bihar Sharif in his Tabaqat-i Nasiri:

Nalanda was forgotten after its decline until the Archaeological Survey of India began excavations on the site in the 19th century. Many ruins have been discovered as a result of these excavations, however, the excavated region represents just a small percentage of the entire Nalanda institution.

Nalanda was regarded as an architectural masterpiece. Enveloped by a lofty wall and a huge gate, the institution had many temples, viharas, stupas, compounds, classrooms and meditation halls. Parks and lakes also adorned the University’s grounds. The excavated ruins of the university indicate that bright red baked bricks were used in its construction.

Without a question, Nalanda was a fantastic world in and of itself, where education and Buddhism blossomed and achieved new heights. To imagine how these remains were once a renowned learning centre for thousands of students, you’ll have to use your imagination. Are you up to the task? Spend a few hours exploring among the ruins of India’s first international university at the Nalanda University Archaeological Complex.

The Nalanda Mahavihara Site has housed the Nalanda Archaeological Museum since 1917, where numerous of the unearthed objects are on exhibit. Coins, sculptures, Buddha images, inscriptions, seals, charred rice samples, terracotta jars, and other antique things are among them. A visit to the museum will provide you with an understanding of the artefacts in use when the Nalanda Mahavihara was at its pinnacle.

Museum admission is $5 per person; minors under the age of 15 are admitted free.

Galtaji: The Beautiful Temple, that is also abode of Monkeys

Lonar Lake: Mystery of the Crater Lake with Essence of Moon