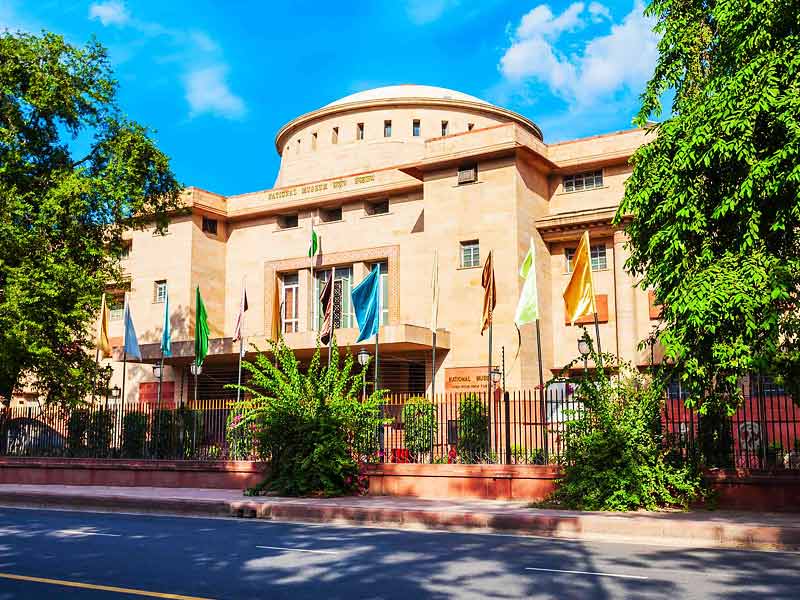 India is a country rich in history and heritage, it is natural that there will be a plethora of museums containing historical records and artefacts.

The National Museum of India in New Delhi, founded in 1949, houses an impressive collection of displays and exhibits. The exhibits trace India’s history from the Mohenjodaro and Harappan civilizations to the present day.

Relics from the Vedic civilization, Gautama Buddha’s personal effects, arms and weapons used by Indian kings over the centuries (including an elephant’s armour), artwork, woodcarvings, textiles, musical instruments, and sculptures are on display. A visit to the museum promises to be an unforgettable experience. This is also one of the country’s most popular museums.

The Asiatic Society founded the Indian Museum in 1814. Calcutta was the capital of British India at the time, and it remained the centre of political and cultural development for a century. It’s no surprise that the Indian Museum is the oldest and largest museum in South-East Asia.

There are thirty-five galleries in total, divided into six sections. Archaeology, Art, Anthropology, Botany, Geology, and Zoology are the categories for the artefacts and displays.

The archaeology section of the museum is one of the most fascinating, with magnificent displays including an Egyptian mummy. Visitors continue to enjoy the coins gallery, musical instrument gallery, Mughal painting gallery, mask gallery, and Palaeo-anthropology gallery.

The Salar Jung Museum in Hyderabad is one of the most well-known in the country. The museum opened in 1951 in the palace of Nawab Mir Yousuf Khan, also known as Salar Jung III. Salar Jung III personally collected over 1.1 million artefacts and works of art, which are housed in the museum.

The Clock Room, a gallery of historical clocks and timekeeping devices from around the world, is one of the best collections here. The Quran Collection is also noteworthy. Do not miss out on the Mughal period antiques. Salar Jung’s collection includes Aurangzeb’s daggers, Tipu Sultan’s wardrobe, Mughal sculptures and artwork, and Raja Ravi Varma’s paintings.

THE PRINCE OF WALES MUSEUM, MUMBAI

Despite the fact that it has been renamed Chhatrapati Shivaji Vastu Sangrahalaya, this museum is still known as the Prince of Wales Museum. The museum was established in 1922 to commemorate the Prince of Wales’s visit to India. Some ancient relics from the Indus Valley Civilization, magnificent sculptures from the Middle Ages, artwork and miniature paintings, pottery and porcelain ware, and a fine display of ancient Indian weapons of war are among the exhibits here.

George Witte designed the domed structure that houses the museum, which is a beautiful blend of Hindu, Islamic, and British architecture.

Also read: Prohibited Places in India: 9 areas where common citizens are not permitted

The Government Museum of Chennai, also known as the Egmore Museum because of its location in Egmore, is housed in the Pantheon Complex, a stunning colonial structure. The bronze sculpture collection is one of the most impressive exhibits from South Indian history at this museum.

Bronze sculptures dating back to the 7th century Pallava times are on display in this gallery, but some of the best pieces come from the Chola empire between the 9th and 11th centuries. It also has some wonderful Buddhist relics and coins from ancient south India.

The National Railway Museum in Chanakyapuri, New Delhi, is a popular destination for children and rail enthusiasts. The museum, which spans approximately 11 acres, depicts the evolution of railways in India.

It includes special carriages such as the former Viceregal Dining Car and the Maharaja of Mysore’s rolling salon, in addition to a collection of steam engines and locomotive carriages. The Fairy Queen locomotive is on display as well. The indoor exhibit includes a wonderful collection of vintage photographs of trains.

Fabrics and textiles have long been an important part of Indian commerce and culture. The Calico Museum of Textile in Ahmedabad displays the splendour of Indian looms and textiles. The museum not only displays ancient textiles and clothing made in India during the Mughal era, but it also chronicles the progress of the textile industry in various parts of the country.

Don’t miss the fine Kashmiri pashminas and rugs, as well as the Ikat handlooms. However, children under the age of ten are not permitted.

India is a country full of dolls. They are used as idols, story props, toys, and for a variety of cultural purposes. Shankar’s International Dolls Museum in Delhi houses one of the country’s largest doll collections.

This museum’s galleries feature an impressive collection of dolls from various parts of India as well as 85 other countries. The museum transports us around the world, from Japanese Geisha dolls to Spanish Flamenco dancer dolls, from American farmer dolls to Thai Women’s Orchestra. The in-house workshop also creates a variety of Indian dolls dressed in regional attire.

The Napier Museum, named after Sir John Napier, the former Governor-General of Madras, is housed in a beautiful Indo-Saracenic structure in the heart of Thiruvananthapuram.

The museum houses a stunning array of displays from all over South India. The carvings and artefacts in wood, bronze, and ivory from Kerala, however, receive special attention. A special collection of Hindu god idols from Kerala and Tamil Nadu can be found at the museum. Don’t miss the Ramayana and Mahabharata exhibits, which are made from Japanese leather dolls.