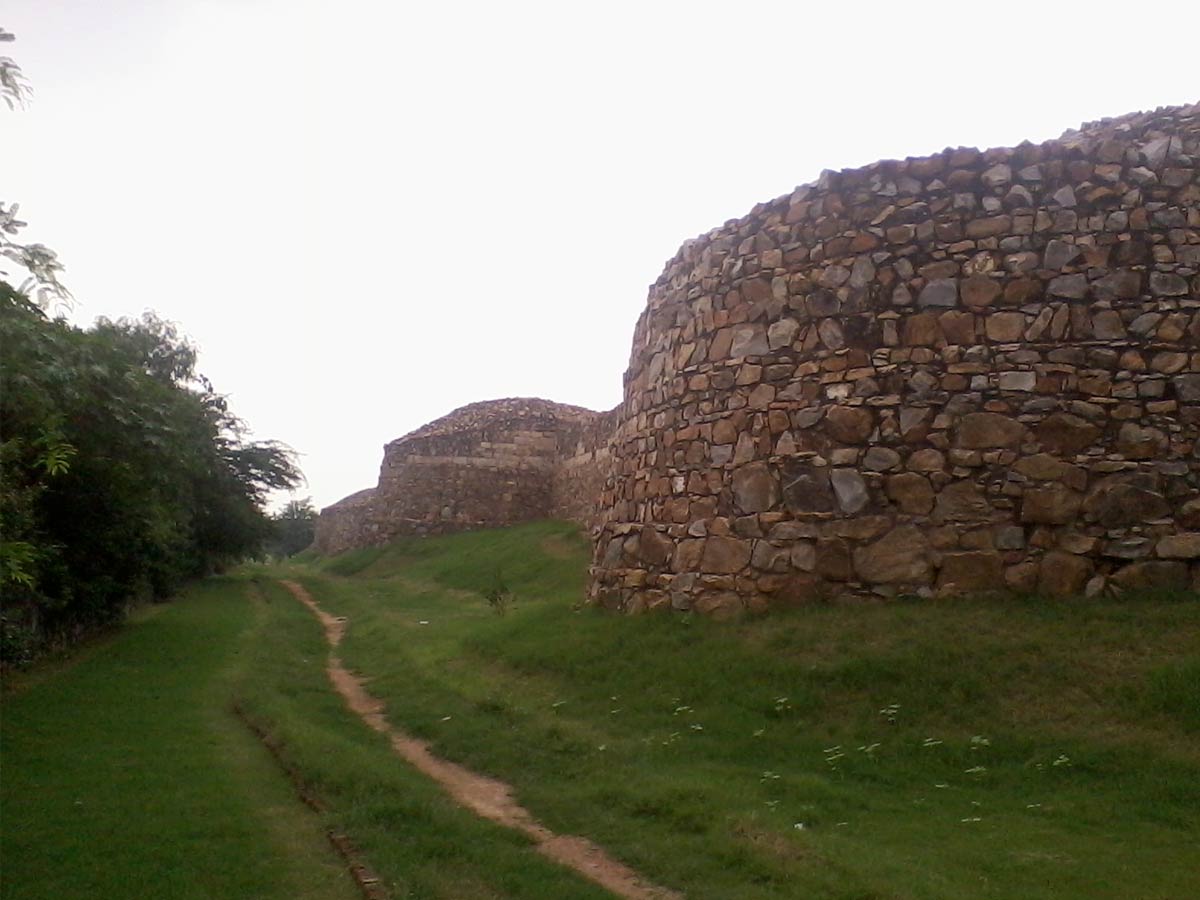 In contemporary Delhi, Lal Kot, also known as Qila Rai Pithora, is a walled compound that encompasses the Qutb Minar complex. It was built between 1052 and 1060 CE during the reign of Tomar monarch, Anangpal Tomar. It is known as Delhi’s “First City.” The fort walls can still be seen in parts of South Delhi, including Saket, Mehrauli around the Qutb complex, Sanjay Van, Kishangarh, and Vasant Kunj.

The Qila Rai Pithora (formerly known as the Lal Kot) is thought to have been built during the reign of Tomar king Anangpal II.

According to the inscriptions on the iron pillar, he took it from Saunkh (Mathura) and had it installed in Delhi in 1052. Numerous palaces and temples were built around the iron pillar, eventually leading to the construction of the fort, Lal Kot. In the year 1060, the construction of the Lal Kot was completed. The fort’s walls were 60 feet long and 30 feet thick, and it had a radius of more than 2 miles.

“It was Anangpal II who established Indraprastha and gave it the name Delhi.” The kingdom was in ruins when he took over the throne in the 11th century, and it was he who built Lal Kot fort (Qila Rai Pithora) and Anangtal Baoli. “The Tomar dominion over the region is proven by various inscriptions and coins, and their ancestry can be related to the Pandavas of the Mahabharata,” said BR Mani, former joint director-general of the Archaeological Survey of India. Lal Kot was the first “red fort” in Delhi. The Red Fort, also known as Lal Qila, was originally known as Qila-e-Mubarak and was built by Mughal Emperor Shah Jahan.

“Pirathi Nirapa,” a brief inscription on the Qutb Minar, has been interpreted by some writers as vernacular for “King Prithvi.” In the early days of the Delhi Sultanate, a number of kings, including the Tomara rulers and a king known as “Prithipala,” minted certain coins known as “Dehliwalas.” The 3rd final Tomar king of Delhi, Prithvipal Tomar, is thought to be this King Prithvi or Prithipala. He has been entirely overlapped in history due of his name being identical to the legendary King Prithviraj Chauhan of the period.

The Lal Kot was commended by Hasan Nizami, a Persian scholar who penned Tajul-Ma’asir, the first official history of the Delhi Sultanate: “After settling the Ajmer case, the conqueror (Shahabuddin Ghori) travelled to Delhi, one of the great Hindu cities. When he arrived in Delhi, he found a fortification (Lal Kot) that was so magnificent that no other fort in the world could compare in terms of height and firmness.”

Lal Kot had strong defended walls with bastions, and the city’s population was around 6000 people during the period. The ruins of the Lal Kot walls may still be seen near Adham Khan’s mausoleum in Meharauli village’s wonderfully green Sanjay Van. To get there, walk past the Adham Khan tomb, which is located adjacent to the Mehrauli bus stop. Then, 100 metres ahead to the right, just before the boundary wall of a girl’s school, heave yourself up and sneak around the garbage dump until you reach the first of the Lal Kot’s embattlements’ bastions.

Keeker trees and plants grow on both sides of the barriers. The wall is approximately six feet tall. Huge quartzite rocks with precise edges fit into each other without the need for cement may be seen. At regular intervals, round bastions strengthen the walls.

Before Hemu seized the Delhi Throne for a brief period three centuries later, in 1556, Prithviraj Chauhan was the last Hindu King of Delhi. Muhammed Ghori, a Turkish warlord, arrived in 1191 with his army in search of excitement. Prithviraj Chauhan defeated Ghori at the First Battle of Tarain. However, because Indians regard all visitors as gods, Ghori was liberated as a result of Prithviraj’s generosity. It was time for retaliation a year later. Ghori arrived with a larger army, and the two battled again in 1192 at the Second Battle of Tarain.

Qila Rai Pithora was plundered and burned down when Prithviraj was vanquished and dragged away to enjoy Ghazni’s hospitality. This would not be the first time the city of Delhi had been sacked.

Sixty-seven temples were demolished at the time, and the pillars were used to construct India’s first mosque, Quwwat-ul-Islam, at the Qutub Complex. This victory set the groundwork for the Sultanate of Delhi. The Qila Rai Pithora’s walls are Prithviraj’s only remaining legacy. The epic Prithvi Raj Raso, penned by the bard Chand Bardai, was also written. Bardai is thought to have accompanied Prithviraj to Ghazni. According to legend, a blinded Prithviraj Chauhan killed Ghori with Shabdbhedi Baan at an archery competition in Ghazni after his poet gave away Ghori’s position.

The walls of Qila Rai Pithora have also survived thanks to ASI’s excellent conservation efforts. To get to the walls, exit the Malviya Nagar Metro Station, cross the road, and walk right on Press Enclave Road until you reach the entrance to the Rai Qila Pithora park. The walls are surrounded by lush lawns. There is a walking path where residents from nearby colonies gather to catch some fresh air. You see, a former Delhi Police Commissioner attempting to get some exercise. People are dispersed with their picnic baskets for the weekend.

The statue of Prithviraj Chauhan stands atop the circular library structure. The walls of Tughlaq city Jahanpanah meet those of Qila Rai Pithora to form an even larger city later. Lal Kot functioned as the common people’s residential quarters for Jahanpanah city, while Siri – Delhi’s Third City — housed the soldiers.